As the first asteroid confirmed to have originated outside the Solar System whizzed by at roughly 85,000 mph, scientists scrambled unsuccessfully to figure out some way to catch up to it. Was it different from the asteroids in the belt between Mars and Jupiter? Was it even an asteroid? What if it was some kind of technology designed by an alien race?

The Breakthrough Initiatives program observed and gathered data from the asteroid, but found no evidence of life or signals indicative of technology. For all we’ve learned about space, the more we realize we don’t know, especially when it comes to aliens.

NASA chief scientist Ellen Stofan believes we’ll find “definitive evidence” of alien life by 2050. Probably microbes in a chemical soup somewhere, similar to how life began on Earth, but who knows? Maybe we’ll encounter intelligent aliens who bestow their wisdom unto us, like the paternalistic aliens of science fiction. In Arthur Clarke’s Childhood’s End, aliens free Earth from crime, war, and disease (the story’s ending is a bit more complicated). In Carl Sagan’s Contact, aliens provide humanity a paradigm-shifting understanding of the universe; in Arrival, the aliens’ gift is a new understanding of time. In these stories, humans develop meaningful relationships with aliens based on common goals, fairness, and decency.

However, Liu Cixin’s award-winning Remembrance of Earth’s Past trilogy raises the question of whether NASA transmitting the Beatles’ song “Across the Universe” toward Polaris or sending the Golden Record beyond the solar system was such a wise idea.

Liu’s epic story offers a frightening take on the Fermi Paradox and whether we should make contact with aliens. (Warning: The rest of this piece contains spoilers!) After reading Silent Spring and plummeting into despair, Ye Wenjie, a Chinese astronomer stationed on a remote coast listening for extraterrestrial signals, sends out her own cosmic SOS. She receives a warning from a member of an alien race searching for a stable planet to call home. We’ll take you up on your offer, and that won’t turn out well for you, the being communicates. It can’t be worse than how things are now, Wenjie responds.

Thus begins the Trisolarans’ 400-year journey toward Earth and humanity’s scramble to figure out what to do. They presume Trisolaran technology outstrips their own, but they have no idea what technological insights or leaps might be the responsible for that. How can humans fight back against unknown alien technology? Can they hide or escape?

These questions comprise vast stretches of the trilogy, and the eventual solution relies on what Liu calls “Dark Forest Theory.” Dark Forest Theory starts with a seemingly obvious axiom: every civilization will do whatever it must to survive. The second axiom is that civilizations strive to grow in population and spread out among the stars, which promotes survival. The third axiom is that the universe doesn’t offer unlimited opportunities for expansion — while the universe is infinite, its resources are not. Thus, civilizations are locked in constant competition.

With those premises in mind, Liu posits that the universe is a dark forest. Its inhabitants, who traverse the forest in the hopes of finding food, building materials, and other useful items and knowledge, move quietly and carefully. They know others search for the same resources, so they can never be sure who or what lurks in the darkness. Anyone they might encounter in the forest is an enemy, so it behooves them to attack anyone or anything they see if they can. Alliances are virtually unheard of. Neither trust nor the desire for cooperation exists in the dark forest, as no race knows if it’s the hunter or the hunted at any given moment; everyone is both. Survival in the dark forest requires equal parts subterfuge and aggression, with technological prowess often dictating who succeeds.

To make noise in a dark forest is to court death. The odds that someone hears you are slim, but because the outcome would be disastrous, you don’t play the odds. If someone or something does hear you, then it can find you, and you have no idea how powerful, intelligent, or malicious it is. All you know is that another alien race is likely more advanced than yours. Given that existence depends on not being found in the dark forest, you keep the muzzle on — unless you’re taking out someone else, which might be noisy but secures survival a little while longer and serves as a warning to anyone who might be listening.

While Liu’s theory is dark, it’s grounded in what we know about the universe. According to scientists’ best estimates, the Big Bang occurred approximately 13.7 billion years ago. Earth formed roughly 4.54 billion years ago (the most basic forms of life developed on Earth between 3.5-3.9 billion years ago). There’s roughly nine billion years of pre-Earth cosmic history during which life could develop and flourish on other worlds. Back in 2003, the Hubble telescope identified what astronomers believe is a 13-billion-year-old planet. How many of these planets exist? How many of them harbor intelligent life? Earth is relatively young in the grand scheme of things. Not only is it likely that intelligent life exists elsewhere in the universe, but it’s also likely that such life is considerably older and more technologically advanced than ours. Perhaps much, much more advanced, like the Trisolarans, who among other achievements figure out how to travel at the speed of light, making rocket boosters seem like kids’ toys.

It’s almost impossible to imagine what technological leaps would have been made by a civilization that’s been around twice as long as any on Earth. Perhaps that’s the point — while we can envision some leaps, such as the one from biological to digital life, who knows how much we don’t know, and more importantly, how much we don’t know we don’t know? How many innovations and advances we can’t even understand, much less realize? Such possibilities increase Dark Forest Theory’s potency. Imagine how desperately you’d want to avoid a confrontation with an alien race that possesses unimaginable technology and how much effort you’d put into cloaking, whether through stealth technology, misdirection, or hidden outposts.

Hidden civilizations offer one possible answer to the Fermi Paradox, which raises the question of why we haven’t found evidence of intelligent alien life if many such races exist out there. Rather than support Enrico Fermi’s theory that intelligent life is unique to Earth, Dark Forest Theory raises the possibility that alien life is too intelligent to be detected, either because it’s hiding and/or because it’s plotting another race’s destruction. Even if an alien race knows about Earth and humanity’s relatively young age, it might not think it worth the risk of testing us. Not only would aliens have to speculate about our scientific prowess, they’d also have to rely on Earth not having a paradigm-shifting technological leap in the time it would take them to get here. They’d also have to worry about humans — or another race — spotting them as they sped Earthward. 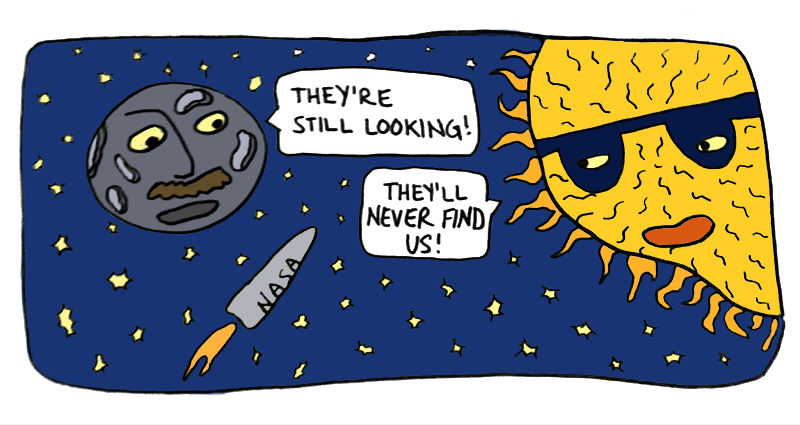 What could we do if it spotted an incoming alien fleet? The humans in Liu’s books grapple with insufficient options. The Trisolaran home world is 400 light-years from Earth — Earth doesn’t have any technology, weapons, or satellites that can even begin to traverse such a distance, and by the time the Trisolarans are within firing distance of Earth, it would be too late. What does a traveler in the dark forest do upon realizing it’s being followed by something more powerful?

The best option — at least, the best one the humans in Liu’s book come up with — is to make noise. It’s risky, as it reveals Earth’s location, but if it also reveals another civilization’s location, then the other inhabitants of the dark forest have a choice to make. Which race do they attack? And how do they know their coordinates won’t also be revealed? Is it worth the risk? Such questions underscore the deterrent possibilities of Dark Forest Theory, as well as the chance that nothing will deter an attacking race.

Stephen Hawking warned us against responding to alien signals — he likened a meeting between humanity and an extraterrestrial race to “Native Americans encountering Columbus.” But astronomer and former SETI research director Seth Shostak disagrees. Shostak eludes to the underpinnings of Dark Forest Theory by agreeing with Hawking that we can’t know the intentions of aliens and that “in any Darwinian system, there’s always a benefit to aggression by some.” But ultimately, he argues, it’s simply too late. Our radio, television, and radar broadcasts are already out there, and any advanced society that could potentially harm us has long possessed the ability to detect those emissions. So where does that leave us?

In Shostak’s mind, we’re right where we’ve always been: Earthly members of a massive, intergalactic dark forest. The dark forest has, ostensibly, been populated for billions of years — that hasn’t changed. What has changed is our awareness of our relative smallness and vulnerability, as well as the precariousness of all life in the universal grand scheme of things. But such awareness doesn’t change reality or the odds of an alien civilization attacking. “Yes, anything’s possible. But that doesn’t mean that everything’s plausible,” says Shostak. “Sure, Martians could mount an attack on Earth in the near future. But that’s one worry that won’t keep me awake at night. Nor should it trouble you.”

The prospect of contact with an intelligent extraterrestrial race excites many beyond description. Yet at the same time, imagining a dark forest populated by countless races of various ages and technological abilities makes one’s heart pound. Underneath the exhilaration and adrenaline, there’s a kernel of fear. After all, we are but babes in the woods. •

All images created by Isabella Akhtarshenas.