Venice grew to power in the divide between East and West. This unique circumstance overwhelmingly conditioned her art. At first, she was drawn naturally towards the East, as the stronger culture. But then, with the decline and eclipse of Byzantium, Venice acquired extensive mainland territory towards the West. For a thousand years, the city kept her independence under an unbroken line of doges, only to be upended by Napoleon who nicknamed the Piazzo St Marco “the grandest drawing room in Europe.”

Whether you arrive by train, bus or boat you’re bound to be transfixed by the sudden cinematic entry into a foregone world. No cars, just boats, water, and imposingly impossible beautiful buildings. All worldly concerns disappear as you are invited to take part in this historical stage, and it is always with a wistful heart that I depart.

Four nights is a good length. Don’t try and take in everything, as you won’t manage. It is visually rich. It’s a holiday for the eye that incessantly spots what it can from a neck-straining panorama. No one writes about Venice more insightfully than Jan Morris in her book The Stones of Venice and no guidebook can better that of Mitchell Beazley. 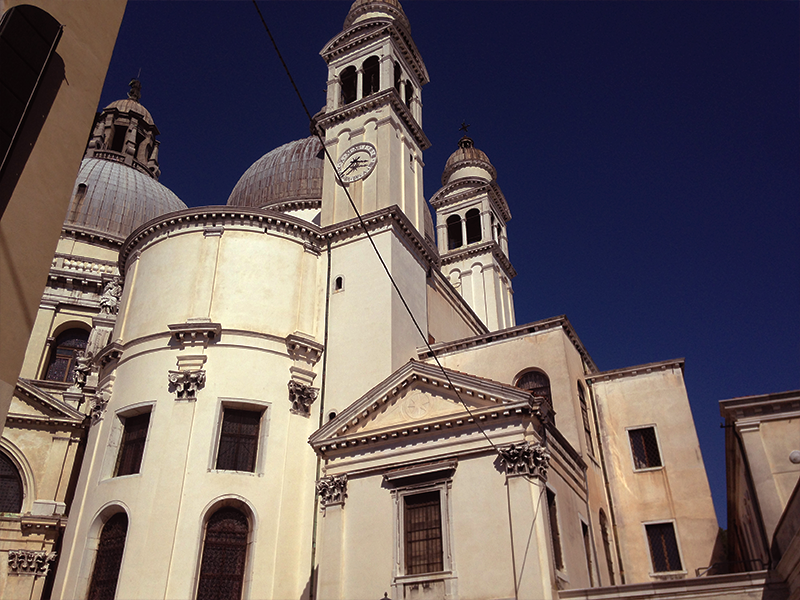 I stayed first at The Londra Palace, right by St. Mark’s, which overlooks the Bacino di San Marco. How romantic to wake up and open the shutters to the central waterway hub of boating traffic emanating from the Grand Canal. Not to mention the view across to the San Giorgio church. Furnished with Murano glass chandeliers and offering al fresco dining this classic, rather than old-fashioned, hotel cleverly blends with its blue rooms the water beyond.

I visited Venice dozens of times, whenever possible concentrating on the Giudecca as it is cut off from the main islands and, with only the Redentore church in the guidebooks, it’s as good as anywhere to be amongst the Venetians going about their daily lives. Michelangelo spent three years exiled on the island from 1529. 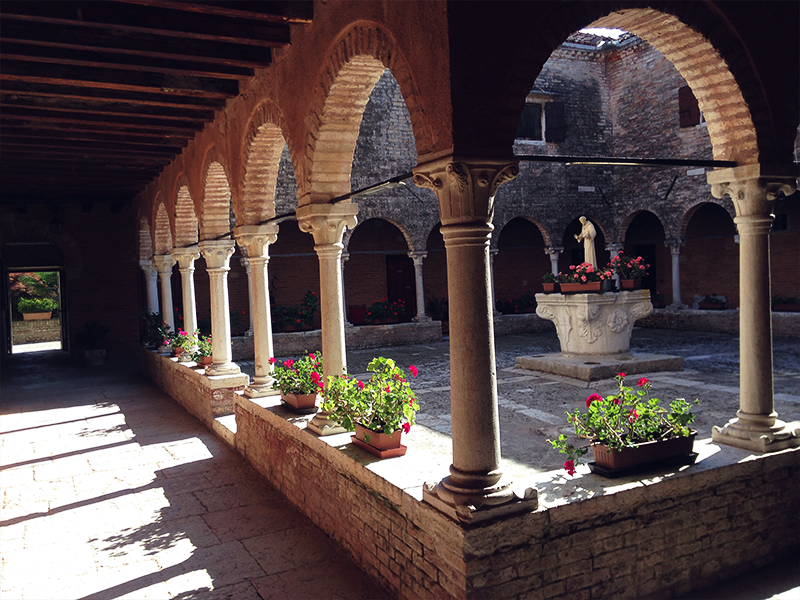 I was next to stay at Bauer Hotel. It’s a four-strong complex of high-class hotels, all different in their style and architecture. I met the owner, the collected, dynamic and engaging Francesca Bortolotto Possati. She explained her private passion for the gardens of her discreet Palladio hotel, a conversion of the Zitelle, a church that used to house and protect, within its walls, the wellbeing of unmarried girls.

It’s best to try to keep away from the main yellow arrowed route linking the station, the Rialto Bridge and St. Mark’s piazza. Visit Campo San Polo, the largest of the city’s squares and watch children kick footballs irreverently against the church walls. Eat with the locals at the Madonna by the Rialto that serves fresh crab and is close to the food market where seagulls are shooed away by the fishmongers. I love watching the Venetians go about their daily lives, garrulous, gesticulating, and hardened by the elements.

They’re similar to the Cornish, rugged, sea-faring, separatist and mercantile, putting up with tourists if only for their spending. It is easy to forget the harsh ambition and blood spilled to make this city the empire it was and the aesthetic delight it remains. 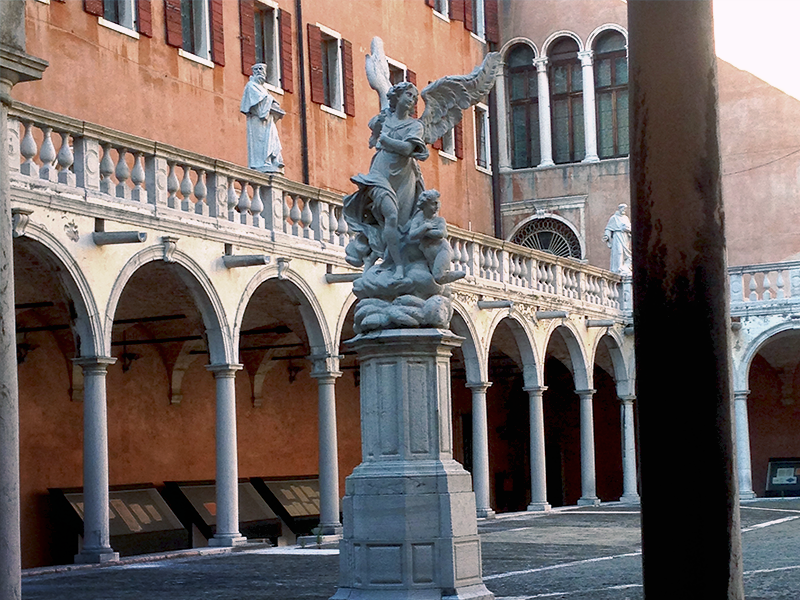 The lack of combustion, save for the busying Vaporettos and water taxis gives a unique quality to the city and one without permanent noise. The lapping ripples of the encroaching water, invasive at aqua alta (high tide) remind me of the ultimate fragility of the lagoon. Water is in the Venetian blood. Swap cars for boats and you get shipyards for garages, docks, and marinas for parks. It also allows for other sounds to come to the fore. Church bells chime with different tones at charmingly slightly different times. Gondoliers sing their barcarole folk songs.

At night the serene sight (the Venetian empire’s sobriquet is “La Serenissima”) of the domes and bell-towers (campanile) lit up after their daylight muffled chiming emits the city’s strong religious presence. I often take a Vaporetto in the evening down and up the Grand Canal for only then can I see the grand splendor of gilded ceilings and the expansive rooms of the opulent palazzos. 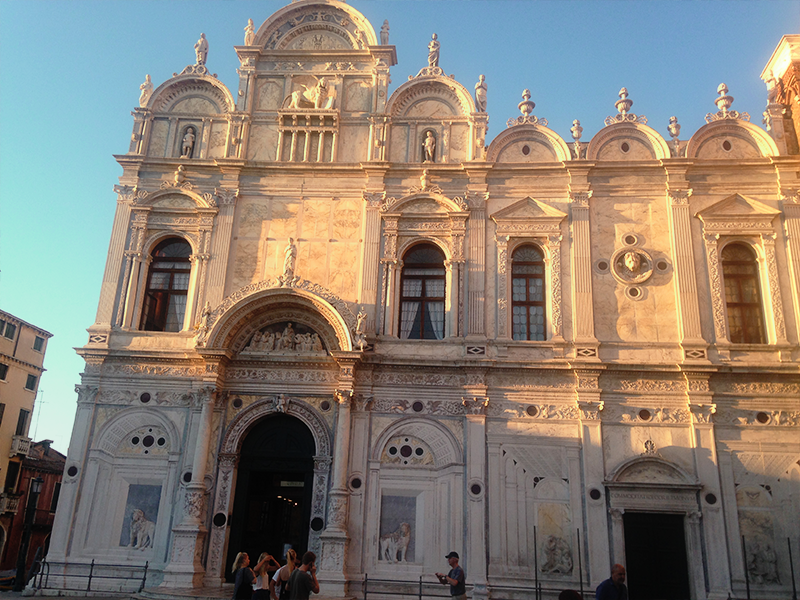 Where could be chicer to stay than the Aman Venice the venue for George Clooney’s wedding night and truly a grand, splendid late-Renaissance Palazzo set midway along the Grand Canal?

Tucked away down a narrow passageway from the street is its discreet gateway. From the front, there’s an impressive jetty along with the rarity for the Grand Canal of a garden. Go up the main staircase with leaded windows and frescoes, and you reach the piano nobile that houses the ballroom. Here the silk wall coverings are by the top Italian textile houses Bevilacqua, Fortuny, and Rubelli. On the second floor, while keeping its original ceilings, there’s a modern Italian styled chic room with big mirrors making it light with long white silk drapes. The main room on the second floor blends its original beams and ceilings with contemporary Italian chic: big mirrors making it light along with long white silk drapes. The bedrooms blend Venetian ornament with fresh tones of grey, cream, and white. Everything that happens in Aman Venice is done with immaculate and graceful ease.

The thing to do is to combine the central sights with the local outer parishes. For me, it’s the contrast of cramp passageways often resulting in dead-ends with the wide walkable expanse of the quaysides and the exposure to the sea. It’s easy to get claustrophobic so it’s important to maintain a sense of the expansive lagoon. 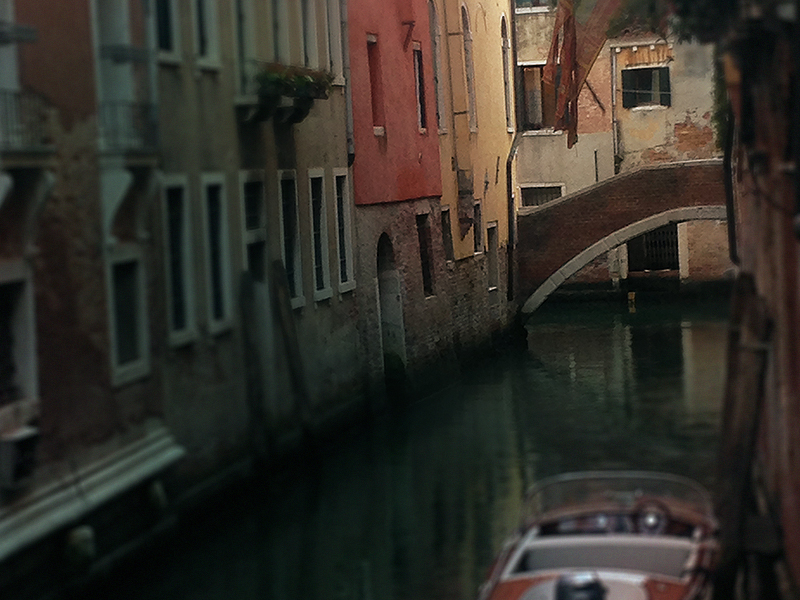 I took a day trip on a private boat with Lagunalonga. Francesco, the charismatic Robert De Niro lookalike skipper, was dedicated to giving me the day I wanted and a great way to get a sense of the whole lagoon.

He took me to the north lagoon. To Murano with her glass factories that are still thriving from centuries of family-owned concerns and with a church bedecked in lovely chandeliers made from the local factories. To Burano, the lace island, with her quaint array of vivid colored houses that were danced upon by the fierce sun and shimmering water. To Torcello, set among lovely pastures, and as ancient as anywhere on the lagoon, with an arrestingly innocent and sacred feel to its small Basilica. Many concepts had their origins in the city. The word for a public open-air swimming pool comes from the Italian Lido, the famous Venetian bathing beach. The original arsenal developed in the 11th century and was the heart of the naval industry. The original ghetto was established in 1516 on the site of a foundry (getto). The word quarantine itself originates from the Venetian dialect quaranta giorni meaning 40 days.

Poveglia and Lazzaretto Nuovo were plague quarantine stations, designed to keep the medieval city safe from disease. Elsewhere on the lagoon, San Michele is the cemetery, San Servolo was the asylum, San Giorgio in Alga an abandoned island formerly a monastery, a political prison, and a secret Nazi base while San Lazzaro degli Armeni was an Armenian monastery island so beloved by Byron.

Monet and Turner were drawn to the restless light, enhanced by the blues of the water and sky. Lord Byron swam across the Grand Canal with manly intent. Romantics and lovers, escapists all belong and thrive in this unique city. For many the mysticism of the weather and light is intoxicating, for some there’s the sense of foreboding as exemplified by the film Don’t Look Now. It’s true that the population is shrinking as the young look elsewhere and it’s also true that Venice will need the advance of science to defy its doom amidst climate change. 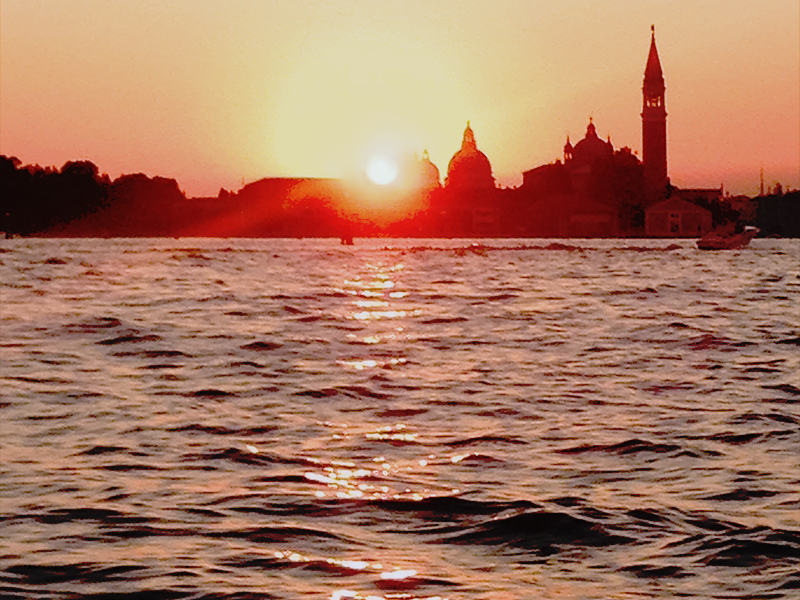 The churches are evenly placed across the islands and are crowned with high statues that appear to be conversing with one another on an altogether higher plane. If you spot a green church door open seize the moment to look inside as often they are shut. Here congregations are still numerous as are the monks and clerics walking throughout the city. I recommend attending one of the many evening classical music performances (perhaps in the Pieta where Vivaldi taught). As a true romantic I answered my soul by attending the midnight mass on Christmas Eve in St Mark’s Basilica where the smells and bells of Catholicism fused with the Byzantine gilded décor and the darkness was alleviated by lanterns and candles. Replenished! •