When you’re young all this stuff happens for who knows what reasons and then you spend the rest of your life trying to figure out what it means.

You may not know the work of writer Gary Indiana (a pen name for the visual artist and writer Gary Hoisington, one obviously selected in the days before web search optimization was a thing). His new memoir may not necessarily clarify the picture. I Can Give You Anything But Love includes no stories about his work as video artist, recently on view at last year’s Whitney Biennial, or his collaborations with Louise Bourgeois, or his art criticism in the Village Voice in the 1980s. Although you’ll learn something about his friendships with writers like Kathy Acker and Susan Sontag, you won’t learn much about his own books, or why he wrote them.

Then again, maybe you will. In an afterword to the memoir, Indiana explains why a more-or-less successful writer and artist has written a life story of loneliness, lostness, and losing. “At some point,” he tells us, “I began to prune away anything suggesting the sort of ‘triumph over adversity’ theme that gongs through much of the so-called memoir genre.” To the rest of us this may seem peculiar, but it is of a piece with Indiana’s lifelong project, one that’s spanned high-concept novels, underground plays, true-crime psycho-bios, political pamphlets, and some of the smartest essays by an American in the last 30 years.

To focus on losers is to fare poorly in the book market: We like to read about winning. But for Indiana, it’s a method of counterpunching a civilization he describes in his true-crime Three Month Fever as one in which “the culture of narcissism … segued some years ago into the culture of total-self-aggrandizement-by-whatever-means-present-themselves.”

It’s funny but also not funny. His 2005 pamphlet The Schwarzenegger Syndrome, a report on “a free-range ego on a mission to build the largest possible following,” is as familiar as any mirror. At the level of politics, this amounts to a celebration of “propaganda in the service of narcissism,” where we actively reward those politicians who assure us, as Schwarzenegger did in 2003, “I don’t need to take any money from anybody. I have plenty of money myself.” (Why have the obvious Schwarzenegger/Trump political parallels gone so unexplored?) 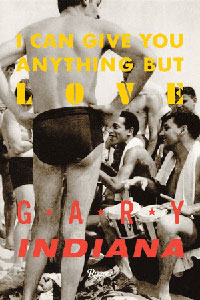 I Can Give You Anything But Love by Gary Indiana

The trouble is that nobody really is as wonderful as we must all pretend to be on résumés and in status updates and on Grindr, and so the sane of our nation are forced either to suffer guilty consciences (which we compensate for in strange and damaging ways) or to refuse to play the game and bear the physical and psychological battery our fellow man will inflict on us as the wages of failure. Indiana dramatizes the mechanizations of this pathology in his novel Resentment, lamenting “a no-fault attitude of the non-incarcerated toward the people behind bars, the powerful toward the powerless, the fortunate toward the losers. And isn’t that what America is all about?”

In Indiana’s books, this sort of attitude is precisely the reason our culture is afflicted by so damned much bluffing, bravado, and bullshit. In the lone human mind, things can become even darker. Resentment is partly the story of a pair of wealthy brothers who cold-bloodedly murder their parents in their shared mansion in Beverly Hills. Why? Well, if you ask them, it was mainly this “overwhelming feeling that you had to put up a front and look different, look happy, and never allude in any way to the sad things that happened all the time.”

They’re resentful of playing into expectations in a world where falling short of “a pretty house in a tasteful suburb, with a sassy, adoring wife by [their] side and four little replicas cute as glove buttons” (in a phrase from the The Schwarzenegger Syndrome) is to consign themselves to perdition.

And so, in order to be honest, Indiana’s memoir must be stylized in exactly the way he tells us it is: If to be a winner is to be complicit in a bad system (and whatever else it is, it is most certainly complacency, “disruptors” included), then Indiana will go to pains to point out for us that, whatever his various triumphs, he himself is also a hopeless loser, one for whom “events, or lack of them, have instilled in me an unshakeable sense of utter insignificance.”

Much of I Can Give You Anything but Love consists of paeans to the people who don’t make it to the finish line first and their various charms, but also paeans to places that have lost out, like the outskirts of Derry, New Hampshire, where Indiana grew up. After the forests around town were razed for tract developments, “the landscape of secret places, fallow orchards, and forgotten graveyards all vanished now under golf courses and malls.” It applies to the communal flops where Indiana stayed when he dropped out of Berkeley in 1968, and to the residential hotel in LA where he lived in the 1970s: “For a few years, at least, it was one of those rare places exempt from the passage of time, like certain islands and barren landscapes in the north and bankrupt cities where industry has come and gone and won’t return.”

This may be why he so enjoys Cuba, where he’s spent lots of time in recent years and where a little over a third of this memoir is set. There are hauntingly pretty descriptions here of neighborhoods that time forgot and the peace one can find within them. Soon now it will be gone, and Cuba will fall prey to “Our Kind of Capitalism. iPad, iPod, YouTube, Buy It, Love It, Fuck It, Dump It, Buy a New One.”

And so the story of I Can Give You Anything but Love is the best kind of writer’s memoir: One that’s not only a piece of the writer’s best work, but can also be read as a key to that work. In its pages we follow Indiana from the hardscrabble hills of New England to the epicenter of the counter-culture on the West Coast, where he lived “in a goulash of stalled creative yearnings, surges of paranoia, fits of depression, frequent spells of drugged euphoria.” Well, that’s your early 20s for you.

While there, he also fell briefly in love with a charismatic intellectual named Ferd, with whom Indiana falls out in a bad way but who reappears in his life here and there and plays much the same role that the smart failure Jack plays for the struggling writer Seth in Resentment (a more autobiographical novel than it first appeared): They become brothers of a sort. And the comfortable rhythm that their relationship eventually settles into adds poignancy to the climax of this latest book, a moment that helped make Indiana the man who wrote it:

Ferd sighed, with an oracular exhaustion I can still hear after thirty-five years: “There aren’t going to be any more highs.”

In that remarkable moment, a switch was thrown in my brain. I suddenly knew that I had expected, for years, the bleak atmosphere of the 1970s to blow away one sunny day like fog, and the good good times of the 1960s to roll back in. The sour, disillusioned era of Patty Hearst and Watergate and Baader-Meinhof, I realized, was not an interruption of the revolution — however I’d pictured that, if I’d pictured it at all — but an ugly portent of inevitable things to come, the first gasp of the final strangulation of human dreams. Reality would always be a harsh reality, and the world would forever divide into winners and losers, and if you were wired the way we were, you would unavoidably end up a looser. Deluded as Ferd often was, I recognized that he’d said something true.

Indiana’s loyal readers, myself among them, can often be heard lamenting that the man is not better known. He pops up here or there for a while (a confessional blog full of insider bitching about the publishing industry which vanishes as suddenly as it appears, or a short-lived travel column in Vice). It can be hard to tell whether his here-then-gone relationship with publishers comes from having too many scruples or too few (or, more likely, entirely the wrong scruples for the market).

But real literary fame is a rare thing, and it rarely comes to writers who fail to churn out a standardized product. David Foster Wallace is the exception rather than the rule. Should Gary Indiana be a better-known name than it is? Of course it should. Would such success be vaguely anathema to how he’s lived and told his life in I Can Give You Anything but Love? Yes, it would. •