When the stubborn, stabbing nerve pain in her abdomen wakes her in the middle of the night and she can no longer endure it, my 15-year-old daughter quietly calls to me and we descend the stairs together and curl up on the couch, under cover of darkness, and seek out the quiet reassurance of a sure and steady friend: home shopping television.

Home shopping is the best 2 a.m., lull-you-back-to-sleep TV I know. There’s no dramatic music, no cliffhangers, nothing to get you hooked. In fact, they pretty much say the same thing over and over and over again. Talk about staying on message. And even when it doesn’t soothe you back to slumber right away, there is something oddly comforting about it. The hosts are so happy. They’re self-satisfied, but somehow inviting, with their facile stream of conversation punctuated by nearly incessant, yet strangely not unpleasant, laughter. What I wouldn’t do for an ounce of their easy, self-assured chatter at a cocktail party or a school function.

Beyond that, everything they are selling is the absolute, life-changing best. Their bras are “so comfortable, it’s a sin . . . They’re heroic . . . fan favorites . . . the fountain of youth (whatever that means) . . . They’re the best bras on earth.” And then there are the jackets. In fact, this one jacket is “the most perfect jacket you could ever own. It is beautiful. Stunning. Chic. Gorgeous.” And I find myself looking at the jovial woman on TV wondering if I want, or maybe even need, one too. Would it make me happy? Could it, could something, make my daughter’s pain go away?

Her pain began on the morning of July 6, 2015. She woke up with it while at sleep away camp. She was briefly hospitalized, but since there was no known cause and no known treatment, we drove up to get her and brought her home. After weeks of tests, CTs, MRIs, visits with surgeons, physical therapists, internists, and anesthesiologists, we (well me, during one of my frantic middle-of-the-night web searches — I am not a doctor, well, not a medical doctor, but I play one on the internet) stumbled upon the diagnosis. She has a neuralgia, sometimes called a nerve entrapment, in a branch of her ilioinguinal nerve in her abdominal wall. The pain is only about the size of a dime but it is near constant. It is sharp and shooting, when she sleeps, when she wakes, when she walks, when she sits. It is especially bad when she dances, which she continues to do six days a week. She’s a ballet dancer.

Once, during a particularly long and dark night during that first long and dark summer, she stopped crying long enough to write in to the show’s host. And sure enough, the host said my daughter’s name on air and told her that she hoped she’d “feel better real soon.” My daughter was delighted. We both were. For a moment we exchanged the reality of our family room sofa for the sunny, carefree world of home shopping in which everyone is happy, stunning, chic, gorgeous, and everything is simply the best.

This past month, after a failed surgical intervention that left us both dejected and weepy, we stumbled upon a segment for the “Hotel Perfect Sleeper Reserve Suite Super Pillowtop Mattress Set.” The host explained that it was designed and built right here in the U.S. of A. “Let me repeat that,” he said, and repeat it he did. “It’s made fresh, expressly for you. It. Is. Made. For. You.” It is “heaven . . . iconic . . . crazy good.” Then he went on a bit of a rant, “You think about first class. Can you afford to fly first class? Probably not. Can you afford a $200,000 car? Probably not. A three million dollar home? Nope. (Long pause for effect). But for a third of your life, could you be living first class? The answer is yes! (He’s almost yelling now). That’s what this is! It’s first-class, five-star hotel living that you can have by getting this bed right now! At the best value that you can possibly find . . . You may never get a millionaire’s car or a millionaire’s house, but you can sleep on a millionaire’s mattress!” He went on, talking to said millionaire, “Yeah, big shot, we’re sleeping on this, too! Yeah!” And he closed the deal with, “This represents the best opportunity of your life.”

Listening to him and his bombastic sales pitch, I was reminded of another salesman’s words, a businessman-turned-politician, who has claimed to offer us the best opportunity, to maybe not sleep on a millionaire’s bed, but even better, to live in a billionaire’s country. Like the home shopping mattress seller, with his conviction and bravado, Donald Trump promises, to “make America great again!” Because he is great. Likewise, America will be rich, because he is rich. “I’ve made billions and billions of dollars and we are going to create millions of jobs” for you! He’s going to be the best “jobs president that God ever created.” God!

While I am disgusted by Trump, by his fear-mongering, misogyny, xenophobia, racism, and rage, part of his appeal to millions of Americans comes from his unabashed, unapologetic, boastful, yes, but positive message. Many are drawn to his hateful bigotry as reflected in the upsurge of hate crimes during his campaign and since the election. However, it was clear from the start, and unfortunately overlooked or ignored by so much of the democratic party, that many others, too many others, are willing to turn a blind eye or a deaf ear to the nasty rhetoric, so desperate are they to embrace his message that everything and everyone could be great again.

During the campaign, Trump vowed to create 25 million jobs. He boasted that he could return the steel industry to Pennsylvania, revitalize the coal industry in the Appalachians, and make the auto industry in Michigan “bigger and better and stronger than ever before.” On his post-election “victory tour,” he crowed that American workers “will finally have a president who will protect them and fight for them.”

These words sound so good to so many, to men and women who struggle to maintain steady work and feed their families. But how will he create these jobs?

There are few details, let alone real policies, behind his claims. He’s said he’ll do away with the competition by deporting undocumented immigrants and strong-arming companies to shutter factories overseas. He’ll combat globalization through tax incentives and tariffs. But many of his proposals are anathema to the free market Republicans whose support would be necessary to enact them.

More importantly, there is little historical data to indicate that these policies could truly impact the lives of most working class Americans. Especially since their jobs in the factories and mills and mines have been lost not so much to globalization, but to automation and other technological advancements. Just because Donald Trump says he’ll bring them back, doesn’t mean he will or he can. And therein lies the greatest similarity between Trump and home shopping TV. Just because you say something — a product or a plan — is great, doesn’t actually make it great. 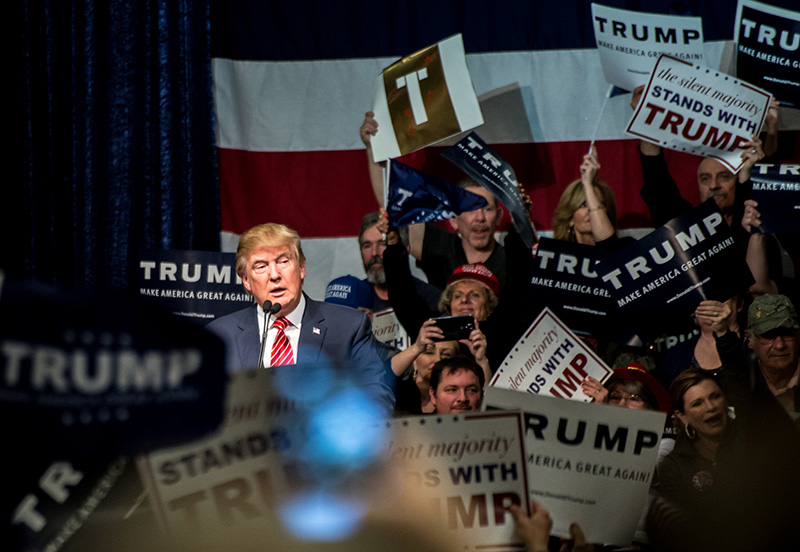 Still, this promise of wealth and jobs, no matter how hollow, was enough to win Donald Trump the presidency. If someone tells you what you want to hear enough times with enough conviction and you really want to believe it to be true, eventually you believe it. Towards the end of his campaign, more reminiscent of a Disney fairy tale than even home shopping TV, he vowed that as president “every dream you ever dreamed for your country” will come true. And people wish so fervently to believe him, that they ignore the lack of plan or practicality, the lack of substance. Just like on the home shopping network, the details don’t matter; it’s the sale, the art of the deal, if you will, that woos us.

Us. I understand how easily we can be wooed from a reality that is comprised of feeling sorrowful and afraid. Trump offers a lifeboat for many disheartened, down and out Americans, just as HSN and QVC provide my daughter and me with a refuge from the pain. And when you are sinking, drowning in despair and someone promises to lend you a hand, sometimes you don’t ask questions, sometimes you just say “Yes!”

So much as it would be nice to buy the bed and the jacket and even the bra and live happily ever after, it is not real — nor is what Donald Trump is selling, or rather, has now sold. And the doctors that have promised to get my daughter well? So far they’re not real either. One of the first doctors we saw after she got sick assured her she’d feel better instantly as he prepared to hastily perform a surgical procedure, with little explanation and only the barest of consents. Upon completion, he said, “You feel better.” She said quietly, “I don’t,” to which he responded, “You will,” as he strode out of the room like a gun-slinging cowboy, his grey coat swinging behind him. We learned later when we collected her records that he’d written in her chart, “Patient reported she was completely pain-free.” But she wasn’t. And she still isn’t. He is the chairman of the department of a renowned children’s hospital. He is a liar and a fraud. 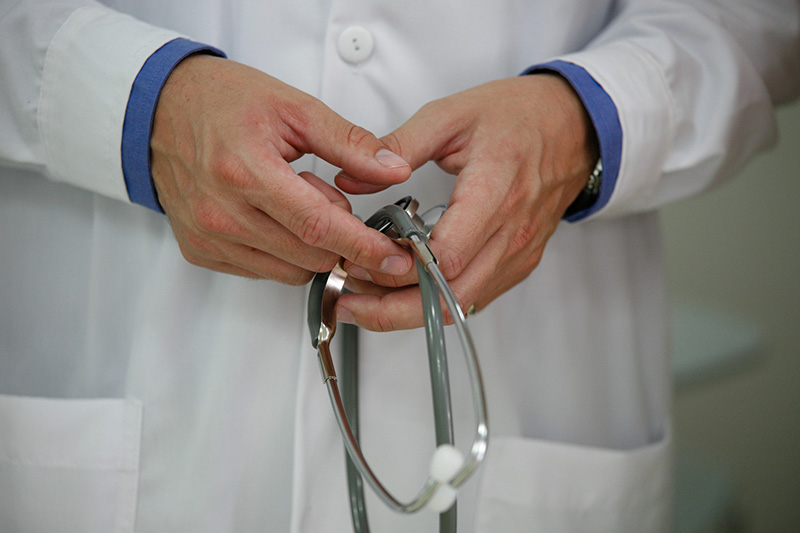 No better was the doctor who said she would never be better, that nerve pain is forever, who pushed opioids, and when we left empty-handed, after waiting two hours to see him, said, “You’ll be back.” No, we are the Goldilocks of patients. Don’t tell us she’s better when she’s not. And don’t tell us she never will be. Our current doctor has said that we’ll keep trying — medications, therapies, surgical interventions, and injections — until we find something that works. This seems like the best we can ask for. Cautious and truthful with a hint of hopeful. Just a hint. Because anything more would be a lie.

As a clinical psychologist, the dilemma between embracing the positive and acknowledging the painful realities of life is part of my daily dialogue. There are times when it is important to focus on the good in one’s life, and there are even times when it can be helpful to believe that saying something is great actually makes it great. So when my daughter and I want lies, when we want to be told everything is going to be all right, that the fix is simple, give us the Super Pillowtop Mattress set or maybe just a killer bra. But when it comes to everything else — health, my daughter’s and our country’s, and poverty and education and immigration and national security — there is only room for real. I am not sure what the future holds. I suppose, that as with my daughter’s pain, we, as a country, must continue to search for answers, options, immediate solutions, long-term strategies, and even hope, but, ultimately, only time will tell, and only what is real and true will prevail. •