Herman Wouk, the best-selling novelist, died on Friday, May 17, at the age of 103. Among his best-known novels are The Caine Mutiny, The Winds of War, and War and Remembrance (the latter two about World War II, inspired by his time in the Navy in the South Pacific). For me, however, Wouk will always be the author of the 1955 novel Marjorie Morningstar, about the coming of age of a Jewish-American girl in New York City. I published a piece about re-reading that novel in the Wall Street Journal four years ago. When I had first read the book, as a teenager almost 50 years earlier, it had been viewed by those in the know as a “woman’s book” and a rather vulgar page-turner. I now discovered that it was a serious work of literature, both well-written and psychologically insightful about a middle-class young woman struggling with the often competing claims of ambition, romance, family, and religious expectation. When my essay appeared, I was surprised by the avalanche of emails I received from readers who wanted to weigh in on what the novel had meant to them when they first read it. Below is a sampling from some of those emails:

I have been a lifetime voracious reader and an avid book club member.  However, I still return to Marjorie as my literary rock and foundation. Almost beyond number I have reread the section where Marjorie reveals to her lawyer husband to be that she lost her virginity to Noel Airman.  His reaction so touched my heart because she was no longer perfect to him. I am 69 years of age, Jewish, and a graduate of Queens College, in New York City. I confess to being another “Shirley.”  I have been married for 46 years and have two sons.  All my men our [sic] lawyers.  I thank you for validating my feelings about Marjorie Morningstar and vindicating my rereading the book in the face of some of my acquaintances who could not understand why the novel means so much to me.

I am a product of the 1950s and Herman Wouk was confronting reality in my time not investigating history when his books came out. I do not know if Marjorie Morningstar survives as great literature but it is great humanity, and serves in the same instructive coming of age tradition as was Studs Lonigan, A Tree Grows in Brooklyn, The Adventures of Augie March, Edith Wharton, and their peers.

Indeed, I was one of those teenage girls for whom  Wouk’s novel was “de rigueur reading.”  If I remember correctly, even as my life and career evolved, I read it every five years, simply to stay in touch with the hopes, dreams, and realities of becoming an adult, as you so aptly noted.  Now, I work assiduously to encourage the younger people around me, those with whom I work, those I mentor, my own children, to hold onto a particular moment in time so that sometime in the future that moment will be remembered both for how it felt and what it meant then, and how it feels and reflectively, what it means now.  I so enjoy the feedback I get when I learn that one of them has had a potent experience of, “Oh, I see what you meant!”

The following is the original article written about Wouk’s Marjorie, a young character with whom many identified.

This year marks the 60th anniversary of the publication of Herman Wouk ’s  Marjorie Morningstar,  the bestselling novel of 1955. Although its heroine is a Jewish New Yorker, the book had wide general appeal when it was published and, for a period, held a place alongside Pride and Prejudice and Gone With the Wind as de rigueur reading for teenage girls. However, unlike those books, which also attracted a serious adult readership, Marjorie Morningstar never did.

This is because the critics at Partisan Review who, for a large part of the 20th century were the arbiters of what qualified as good literature in America, made a point of dismissing the novel. Isaac Rosenfeld ’s review, “For God and the Suburbs,” spelled out its position with the title alone. Rosenfeld disdained Wouk’s novel as a treatise in support of conventional bourgeois values.

But Marjorie Morningstar didn’t deserve to be so reduced. Wouk wasn’t a polemicist, he was a novelist — though one with a strain of moral seriousness, as there was in the work of the great Victorian novelists who were Wouk’s literary forebears.

The book tells the story of Marjorie Morgenstern, a Jewish-American girl whose life, in the late-1930s and ’40s New York City, we follow from the age of 16 to 25 — with a brief coda that skips ahead 15 years. Marjorie’s parents are immigrants from Eastern Europe who have achieved some success in America and want their children to reap the benefits. Marjorie, meanwhile, is both a devoted daughter and a curious, adventurous young woman — fortunate in being beautiful, smart and at least moderately talented. We learn about her social life; her time at Hunter College, the city university populated by upwardly mobile young women (the richer ones go to Barnard ); her performances in school and amateur theater productions; and her determination to make it on Broadway, for which purpose she adopts the stage name “Marjorie Morningstar.”

During a summer working at a Catskills resort, she falls in love with a charismatic songwriter and intellectual, an assimilated Jew named Noel Airman (changed from Saul Ehrmann ). “Airman” is also, aptly, a literal translation of the German/Yiddish term for luftmensch: an impractical overreacher.

The book addresses complicated issues relating to sex and marriage, religious custom and assimilation, art and commerce, philosophizing and partying. Marjorie is a kind of Jewish-American Isabel Archer, the heroine of Henry James’s 1881 novel The Portrait of a Lady, who also had great expectations. Interestingly, while the Partisan Review crowd adored Isabel, they scorned Marjorie. Perhaps her story was too close to their own first-generation immigrant experience. Perhaps it called into question the sacred status that they attributed to art and intellect.

Wouk includes in the novel lengthy discussions between Marjorie and her friends about the meaning of life and the importance of art and money. Critics at the time found these passages silly and overlong; I found them fascinating. One of the shortcomings of The Portrait of a Lady, it seems to me, is that James never shows Isabel in sustained, substantive conversation; we have to take James’s word that she is exceptional. Wouk makes clear that Marjorie is not just beautiful; she is a thinking, articulate being.

Wouk was a realist, uninterested in modernist experimentation. He had no use for psychologizing — at least not in the Freudian terms popular at the time. He took seriously the institution of marriage and the relationship between sex and love. His stance on these issues made him unfashionable in the highbrow circles of his day.

But times have changed. We can accept realism more readily as a stylistic choice; anti-Freudianism seems more valid than not; and even as we are more attuned to the sexual double standard, the idea of taking sex seriously no longer seems uncool. Perhaps we have grown up enough as a society to realize that Marjorie’s concerns are not trivial or contemptibly bourgeois; they are universal and timeless. 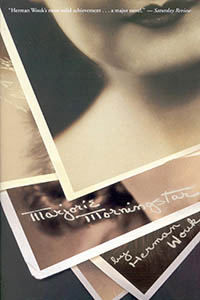 The critics who vilified Marjorie Morningstar directed their ire most emphatically at the ending of the book, in which Marjorie gives up her dream of becoming an actress and rejects the long-delayed marriage proposal from her bohemian lover. She instead marries a Jewish lawyer and moves to the suburbs to raise children.

One could say that Wouk was doing with Marjorie something akin to what James was doing with Isabel at the end of The Portrait of a Lady — bringing the heroine down to earth. But while James makes clear there is tragedy in his ending, Wouk makes this less clear. What seems to have rankled critics of the period was the implication that Marjorie was content with a conventional life. But, then, who’s to say that her life was conventional? What we learn of the life that followed consists of a few surface details relayed to us by a former admirer who visits Marjorie for a few hours in the 1950s after not seeing her for many years.

I am tempted, if only to épater the intelligentsia, to call Marjorie Morningstar the Great American Novel — that distinction sought so fervently at the time when it was written. Although it focuses on “the mere slim shade of an intelligent but presumptuous girl” (James’s phrase for Isabel in his preface to The Portrait of a Lady), its scope is ambitious. It explores the many sides of the immigrant American dream: the often conflicting desire for creative expression, wealth, fame, assimilation and domestic contentment. It doesn’t entirely come down in favor of one kind of life or another.

The character who visits Marjorie at the end of the tale and seems an alter-ego for Wouk finds her fate disappointingly ordinary. But the novel also encourages us to see around that viewpoint — to see Marjorie Morningstar as the journey of a young woman wrestling with contradictions in herself and in society, ultimately leaving those contradictions not entirely resolved. In other words, she becomes an adult. •