There was a time way back when, if you were a serious comics fan, you could keep up with everything being published in a reasonable manner. Maybe not read everything per se, but you could at least be aware of all the movers and shakers and titles of note within a given year.

That era has long since passed. There are so many genres, markets, and subcategories of the comics industry these days — webcomics, art comics, kids’ comics, superheroes, manga, manwha, comic strips — that keeping track of it all is a flat-out impossible task.

So a caveat is in order: I have no blessed idea if these are in fact the best comics of 2017. Perhaps there are other comics out there that, had they been waved under my nose, I would have liked more than what’s listed below. What we have here are merely my favorite comics that came out in 2017 that I actually read. At least for the nonce. Who knows how I’ll feel about anything, comics or otherwise, come the morrow?

10. The Story of Jezebel by Elijah Brubaker. File this under “most criminally ignored book of 2017.” Brubaker, previously known for Reich, a serialized (and recently finished*) biography of controversial psychoanalyst Wilhelm Reich, adopts a somewhat lighter tone for this off-kilter adaptation of the Biblical Book of Kings. With little regard for historical accuracy or staying faithful to the original text, Brubaker weaves a tale of sardonic kings, wisecracking prophets, buck-toothed deities, and put-upon wives as they go about engaging in wholesale slaughter and other nasty cruelties. And yet, despite the jokes and snark, a sense of sorrow suffuses the book, as though all the sly winks and contemporary slang can’t ignore the rivers of blood that seep through this religious text. 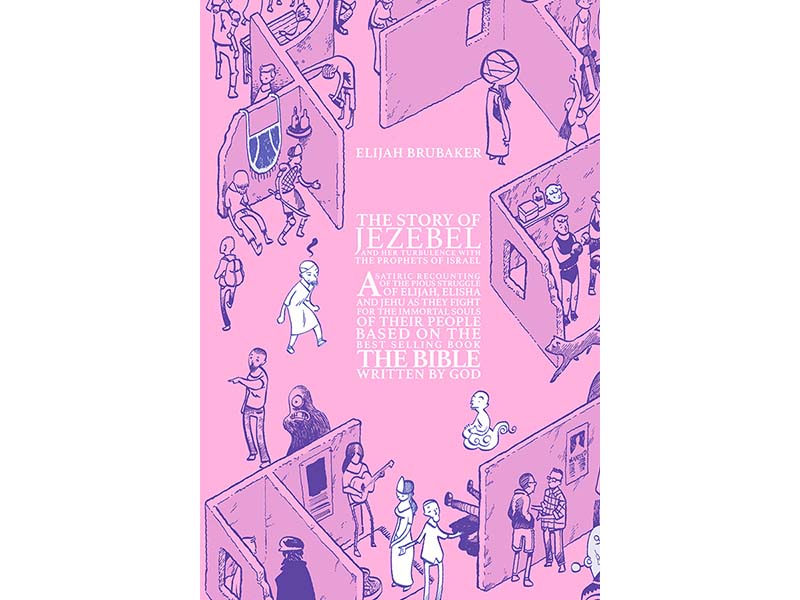 9. Iceland by Yuichi Yokoyama. I said it before and I’ll say it again: There’s no one — certainly not anyone in the U.S. — making comics quite like Yokoyama’s. He’s a true original, and Iceland finds him exploring a variation in his usual oeuvre, though not going so far afield that his usual obsessions and interests don’t come to the fore. Not a comic for the casual reader perhaps, but a far more satisfying and energetic read than what passes for action in the mainstream scene.

8. (tie) The Green Hand and Other Stories by Nicole Claveloux and Pretending Is Lying by Dominique Goblet. I’m looping these two books together because both were published by the relatively new imprint, New York Comics Review, which in a short amount of time has become one of the premiere publishers for releasing significant out-of-print and foreign works. Case in point: These two European graphic novels. The former is a collection of surreal, semi-psychedelic short stories about femininity, sexuality, and self-worth that also just happen to be pretty funny. The latter is an autobiographical tale about the author’s relationships with her oblivious and blustering father and her significant other, who still pines for someone else. Goblet is more interested, however, in portraying their perception of her than the other way around — when she’s not surrendering the page to pure abstraction, that is. In a time when gender roles and women’s issues are coming to the fore in our culture, we can be grateful to NYCR for exposing U.S. readers to these these comics. 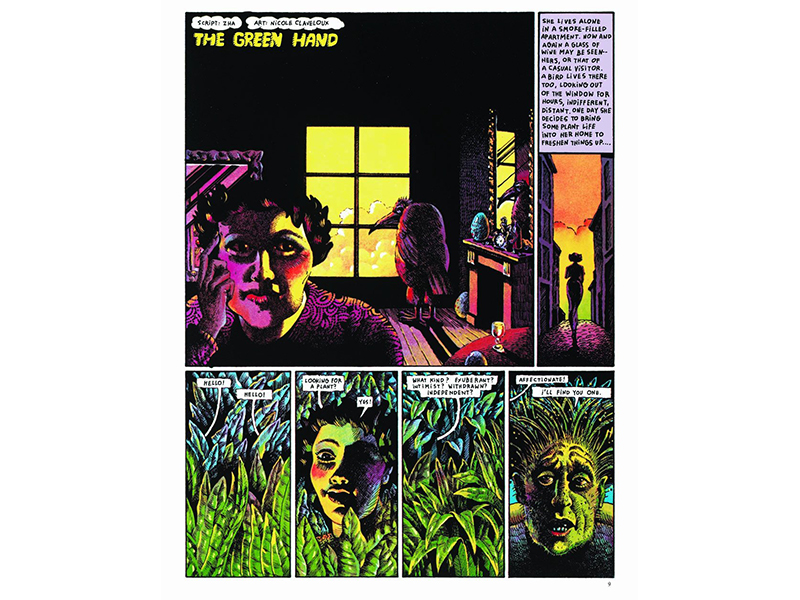 7. My Favorite Thing is Monsters by Emil Ferris. This graphic novel seemed to catch everyone’s eye when it debuted during the beginning of the year and has made most of the “best of 2017” lists thus far. Usually, I’m tempted to look askance at such hugely hyped works, but in Monsters’ case, the praise is entirely justified. Ferris’ tale of a young girl living in late-’60s Chicago trying to figure out how her upstairs neighbor died, while at the same time juggling a sick mother, a Lothario older brother, and her own confused sexual identity is utterly enthralling and stunning in its visual flair and invention. For once, you can believe the hype. 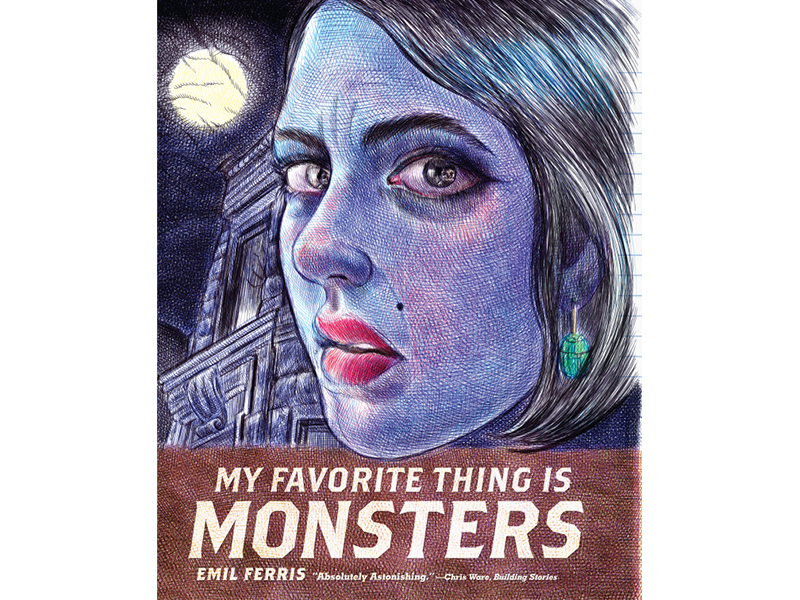 6. Everything is Flammable by Gabrielle Bell. Gabrielle Bell worries a lot. She worries about her plants. She worries about making comics. She worries about being able to afford living in New York City. She also worries about her free-spirited mom, whose rural Northern California home, we learn, has burned down. As Bell tries to help her mother put the pieces of her life back together, she details with great honesty and affection (and perhaps a touch of annoyance) their often awkward relationship, as well as her own struggles with adulthood. Bell has long been one of the finest autobiographical cartoonists working today, and Flammable just cements that reputation. 5. You & a Bike & a Road by Eleanor Davis. Davis is one of my favorite cartoonists working today, and I’ll automatically snap up anything she does. This is a memoir of her attempt to cycle from Tucson, Arizona, to Athens, Georgia, because “I was having trouble with wanting to not be alive, but I feel good when bicycling.” So yes, it’s about Davis’ experiences on the road and attempts to deal with her inner demons, but it’s also about landscape of contemporary America, where barbed wire dots the borders and helicopters fly overhead in search of illegal aliens but where warm and caring people still exist. This book sneaks up on you.

4. Pope Hats #5 by Ethan Rilly. This issue saw the conclusion of Rilly’s multi-part story about a young woman working in an immense, big-city law firm and struggling to figure out if she belongs there or in L.A. with her best friend, a successful actor. It’s the observational details, particularly of the modern workplace, that make this comic so special, as Rilly documents in his delightful cartoonish style the main character’s attempts to figure out not only a career path but if she is worthy of the potential happiness and success that could be available to her. (Note: a trade paperback collection is due sometime next year.) 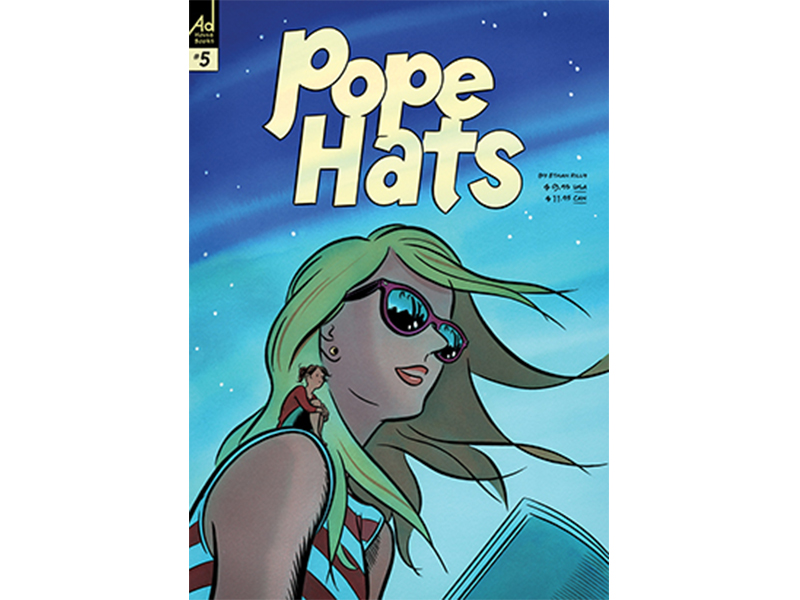 3.5. Education by John Hankiewicz. This is a bit of a cheat, as I had bought a self-published, limited run edition of this graphic novel back in 2014, hence the half-point addition. I raved about it back then, and since it’s now available for realsies via Fantagraphics, I feel it’s worth including here. It’s a tough book to describe (it’s about a teacher who has trouble making human connections, but that’s sort of like saying Ulysses is about a guy who walks around Dublin) and not one for casual readers, as Hankiewicz’s text and pictures line up more in a thematic or poetic sense than a narrative one. For those willing to take a chance on a more experimental comic, you will find a surreal but still emotionally powerful book. I’m really glad it’s available now to a wider audience.

3. Crickets #6 by Sammy Harkham. Harkham’s one-man anthology series has been subsumed of late with Blood of the Virgin, a sordid multi-part story of z-grade movie-making in the 1970s. Issue six is where it all starts to turn to shit, as aspiring screenwriter Seymour finds his directorial debut taken out of his hands due to the vagaries of low-budget Hollywood business. He doesn’t take it well. Harkham once again proves himself to be a masterful cartoonist here, creating a comic filled with delightful little touches that portray a man making increasingly poor choices but remaining ultimately sympathetic nevertheless. 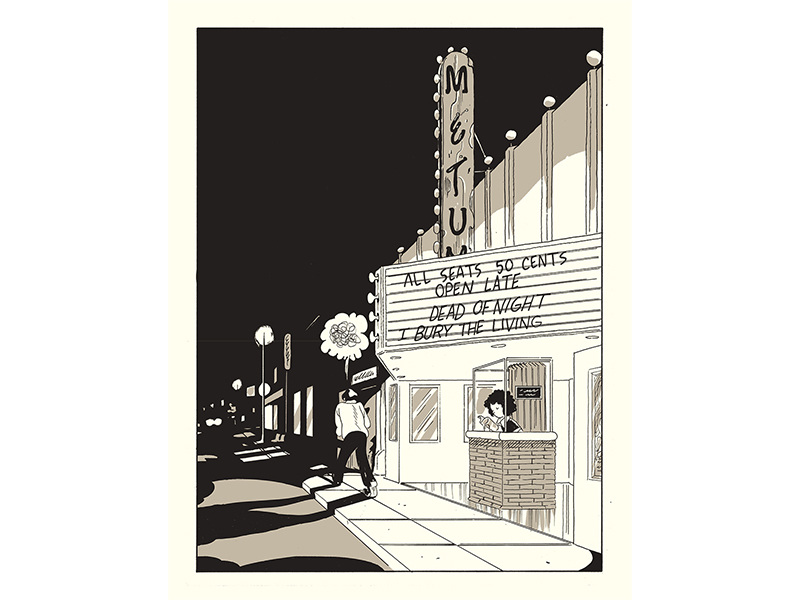 2. Ganges #6 by Kevin Huizenga. Huizenga’s Nicholson Baker-esque series about a man who has a really bad night of insomnia finally came to a close this year (the first issue debuted way back in 2006). Or did it? It can be difficult to tell because Ganges becomes more knotty and intricate as it continues, ’til by the end it seems as though titular character Glenn Ganges’ bad night will never end. That’s actually befitting considering the comic’s focus on the passage of time, the subjectivity of memory, and the yawning maw of eternity. In attempting to visually depict these tricky abstract concepts, Huizenga takes chances that other cartoonists would never dare make. It’s one of the most challenging comics of the year, but one of the most rewarding as well. 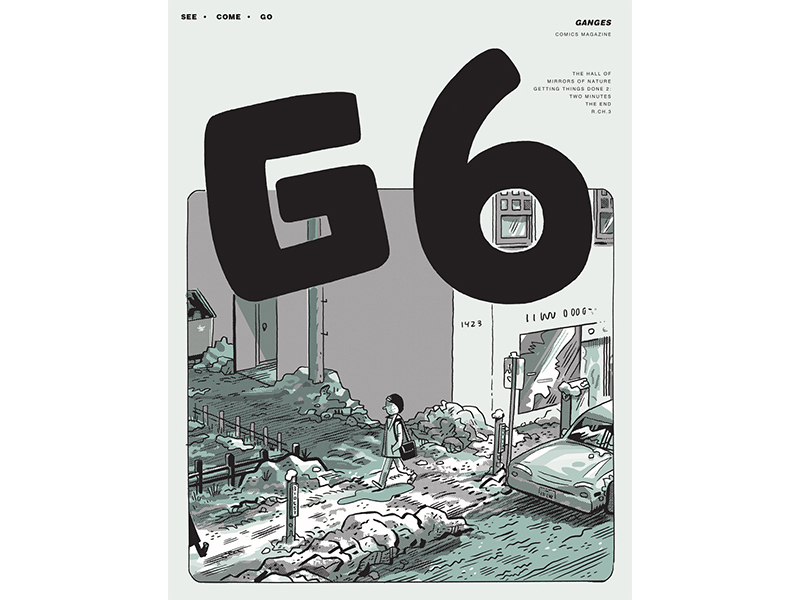 1. Songy of Paradise by Gary Panter. It might be Panter’s most straightforward work to date, but Songy does not lack daring or imagination despite the author’s directness. Drawing upon John Milton, Javanese art, the children’s books of Syd Hoff, the New Testament, and who knows what else, Panter has created a rendition of Jesus’ temptation in the desert that manages to be both sacred and profane, satiric and sincere all at once. And all rendered in some of the most stunning and inspired visual designs of the year. I can’t think of another work that thrilled me in 2017 as much as this book did. 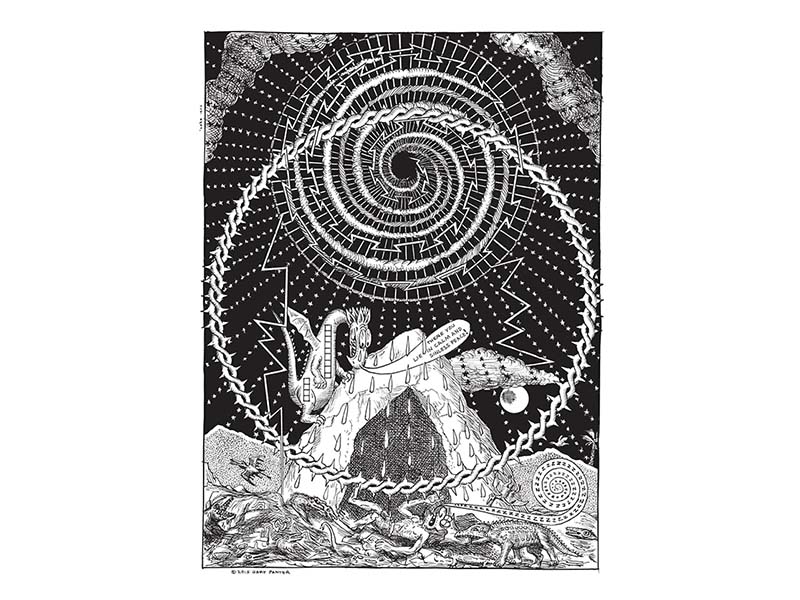 Originally, this essay claimed Brubaker’s Reich was unfinished. The final chapter, however, is now available. The essay has been changed to reflect this.