It’s certainly not for a lack of effort. Hanging doesn’t work. Slitting his wrists is useless. Shooting himself in the head, overdosing on pills . . . nothing he tries gives him the exit into oblivion he so clearly craves. Each time he succumbs, he witnesses a glowing ring of light, then awakens once again in his motel room. At least it seems like his motel room. What is going on? Maybe if he throws himself in front of a truck . . .

That’s the opening sequence to Demon, Jason Shiga’s bloody brilliant (or brilliantly bloody) action comic, a no-holds-barred assault on good taste and timidity that proves to be as hilarious and captivating as it is incredibly violent and profane. Originally serialized both online and via print pamphlets by the author, Demon is now being “officially” published as a four-volume series of books by First Second. The first volume was released late last year, the second just last month — volumes three and four will be coming out by the end of 2017.

As the above synopsis suggests, Demon begins as a locked room mystery of sorts, which should be no surprise to anyone who has read Shiga’s comics before. Having studied math at Berkeley, Shiga’s comics have always had a deep fondness for puzzles and logic problems. Consider Fleep, which features an amnesiac man who wakes up in a debris-blocked telephone booth with no idea how he got there. Or Meanwhile, an elaborate, choose-your-own-adventure tale involving a time machine, alternate realities, and ice cream that has the reader following various differently colored, intersecting paths to determine the outcome of the interactive story. 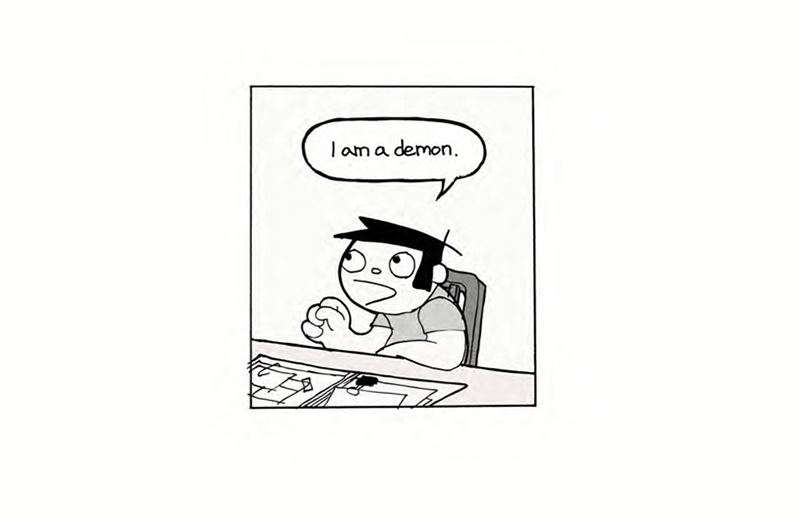 Shiga’s books also frequently exhibit a wickedly dark sense of humor and appreciation for the unexpected plot twist. The main character in Fleep, for example (also called Jimmy Yee — the character turns up a lot in Shiga’s comics), turns out to be not as innocent as he first appears. And there are a number of ways in Meanwhile for everything to end in complete and utter, world-ending disaster. There’s more than a touch of nihilism lurking at the edges of Shiga’s comics.

All three of these elements combine to winning effect in Demon. Like Bookhunter, Demon boasts several frenzied, over-the-top action sequences that verge on the absurd. As with Fleep and Meanwhile, it’s obsessed with structure and rules and constantly puts the protagonist into seemingly inescapable situations, only to have him logic a way out of them. And like all three books, it’s blessed with Shiga’s morbid, tart wit.

And it’s at this point in my review that I should say that if you loathe spoilers and don’t want to know any of the big secrets contained within Demon, you should stop reading right here and just go buy the first volume (assuming you’re not terribly squeamish or easily offended).

OK, everyone else still here? Spoiler alert: It turns out Jimmy Yee is a self-described “demon,” capable of possessing the body of whoever is in closest proximity immediately after his demise. Upon discovering this ability, Jimmy quickly becomes the target of government operatives, fronted by a no-nonsense Agent Hunter who want to make use of Jimmy’s superpower to create an army of demon soldiers. And then there is the possibility of other “demons” in the world and what they know about Jimmy and his talent.

After an initial escape from the cops, Jimmy goes about discovering his power in methodical fashion, trying to determine things like why, for example, when he looks in the mirror he sees his reflection and not that of the person he’s possessing.

And Jimmy, it should be stressed, is an unrepentant monster. He has no qualms about possessing other people for the flimsiest of reasons, nor does he seem to mind straight up murdering scores of people in order to get what he wants (at one point he spells out a message for a potential enemy using dead bodies). And, as the series progresses (I’ve read ahead) the body count rises to astronomical proportions. Apparently, at least in Jimmy’s case, immortality leads to some of the worst decadence imaginable.

So, yes, Shiga gleefully pushes the boundaries of good taste throughout Demon — with each cliffhanger, revelation, or puzzle requiring a solution or resolution that involves death, mayhem, or bodily fluids. Heads are shot at and stomped on, children are killed, bodies are possessed mid-coitus, and one particular escape relies upon dried ejaculate to work. Looking past the gross factor, however, Demon can be seen as a series of logic problems — how will Jimmy be able to escape Agent Hunter this time? — punctuated by dizzying cliffhangers that seem to completely alter the landscape of the comic as we’ve known it up ’til now.

No doubt Jimmy’s body-hopping powers bring to mind the cult television show Quantum Leap. For me, however, Demon most closely resembles an uber-popular manga series from the mid-2000s, Death Note, by Tsugumi Ohba and Takeshi Obata. Both series feature unrepentant, amoral protagonists. Both feature a hard-nosed antagonist who proves to be the hero’s equal, at least in terms of intelligence and determination. Both enjoy creating seemingly impossible problems for the hero to solve or extricate himself from. And both enjoy completely upending the story every few chapters or so via a revelation that upends the status quo. 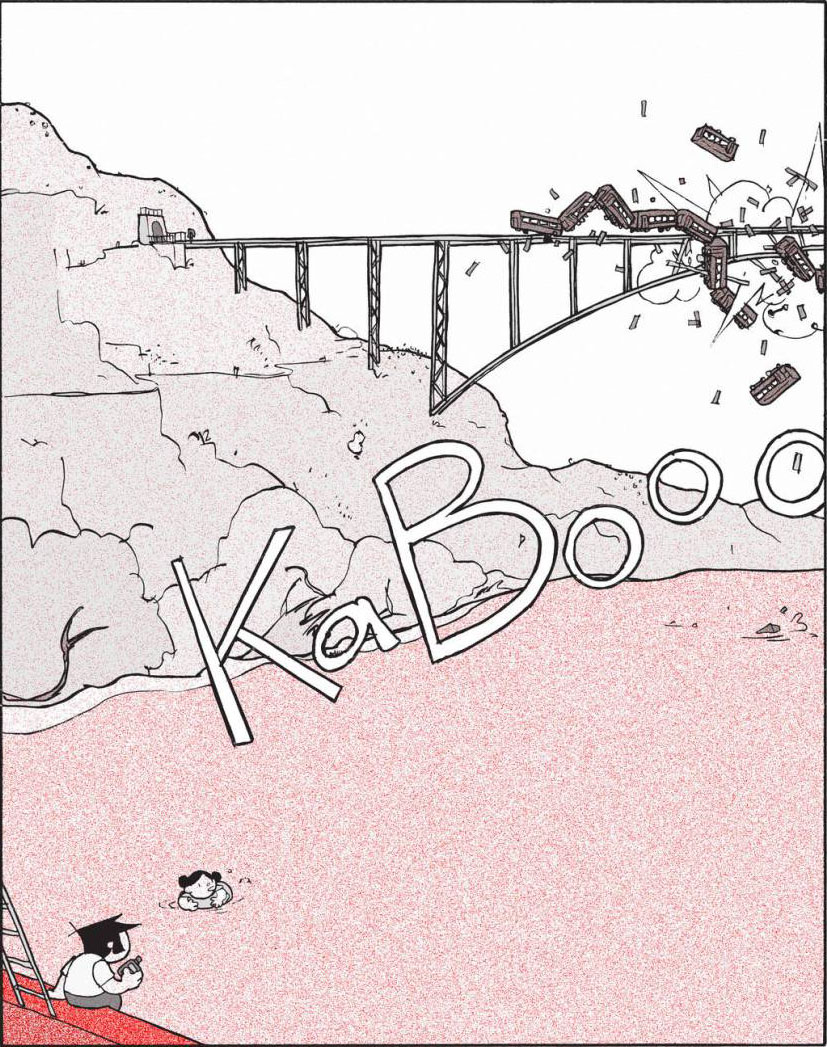 Beyond the shifting plot and puzzles, however, there are two things that make Demon work so well or at least be so palatable and entertaining despite its high body count. One is Shiga’s sardonic wit, which alleviates the more grotesque moments with a good bit of humor. The other is Shiga’s cartoonish art style. Shiga’s figures can be boiled down to simple geometric shapes — circles for heads and eyes, rubbery ovals for limbs, bread rolls for feet, etc. Even Jimmy’s hair resembles a sideways L. This seemingly simplistic style enables him to get away with a good deal of the carnage. It’s hard to get too upset about all the death and destruction when the characters involved look so comical.

Then there are Shiga’s layouts, which propel the reader across the page, following dynamic, diagonal, and at times almost snake-like patterns, so the reader can have no questions about where their eyes should travel.

Taking a step back, it’s not difficult to regard the mere creation of Demon itself as one of Shiga’s locked-room logic puzzles: How can you create a compelling comic that stars an amoral protagonist, features all manner of bloodshed (some of it involving children), contains scenes that a more cautious cartoonist would balk at, and still be not just engrossing but uproarious and charming? With Demon, Shiga has pulled off his most impressive hat-trick to date. •

Images courtesy of the publisher, Shigabooks, and the author.