Did it ever strike you as a strange thing to drag a living tree once a year into your home and set it up to worship? If you are old enough, you may have seen decorating fashions come and go: fir cones painted in gold, cardboard adornments — preferably in red or green — artfully sculpted little angels, fragile glass balls in all colors. And you may have noted that the tree itself has transformed from real to artificial. Fiberglass trees in vivid colors, such as bright blue, are popular. There is a small rotating porcelain tree that plays Elvis Presley’s “Blue Christmas.” Presley himself decorated his ranch house with a nylon tree that had red ornaments and a revolving base tootling Christmas songs. Let’s leave it to others to discuss whether this is still a “real” tree or not.

What Charles Dickens once called a “pretty German toy” has a long history, although it is somewhat difficult to reconstruct because historical documents are scarce. Reports of decorated trees go as far back as 1419; a Fraternity of Bakers’ Apprentices appears to have seen a tree decorated with apples, wafers, gingerbread, and tinsel in the local Hospital of the Holy Spirit in the guilds of craftsmen, in Freiburg, Germany. It’s possible that the inspiration for this practice came from the Christian paradise play, which was popular in Europe in the late Middle Ages. It already had a decorated tree at the center, was performed on Christmas Eve, retold the story of how original sin came to be, and showed the banishment of Adam and Eve from paradise. This tree then freed itself from the religious context of this play and began its path toward the Christmas celebrations of some guilds in the southwest of Germany. A few decades later, tree fellings must have become so prevalent that a Strasbourg town clerk found it necessary to forbid the custom of cutting off pine branches and bringing them home.

For two centuries, the adorned tree remained a peripheral phenomenon until the nobility and the wealthy bourgeoisie of the German states discovered it, where it soon became a focus of the Christmas celebration. Its popularity is tied to the rise of a new way of living, and the architectural division of houses and mansions. Soon the decorated tree could be placed in a “parlor” and unfold its particular effect. From here onwards, it’s easy to see how the tree evolved into what it is today. 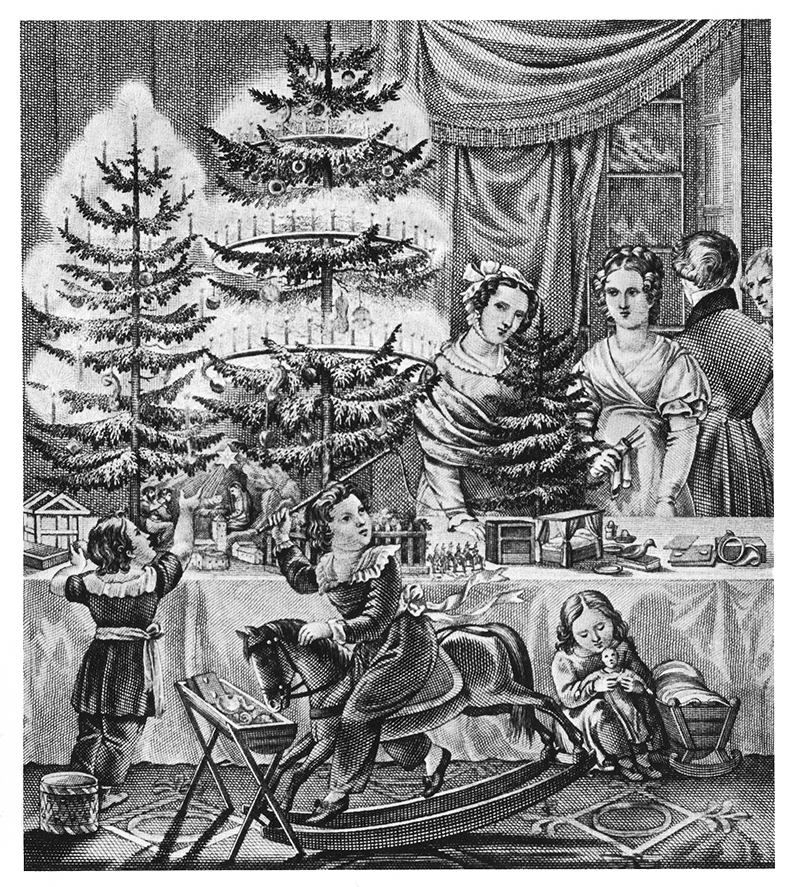 In the United States, the roots of the Christmas tree reach back to the early 1800s. Few German immigrants seem to have brought the custom along, which in turn suggests that this tradition was not widespread back in their European homeland. In any case, such an icon surely would have been reviled by the Puritans, who associated evergreens with heathen superstition. As hard to believe it may be today, even Christmas itself was denounced as an artificial invention without any biblical warrant. As the American historian William B. Waits unequivocally stated: “Good New England grandmas through the first half of the 19th century disliked Christmas. The public sector was in accord; for example, December 25 was not a school holiday in the antebellum Northeast and children were required to attend classes.”

Calvinist reservations prevailed, but a different reality was evolving under the surface. As early as 1812 John Lewis Krimmel from Germantown, Pennsylvania, created a drawing of a rather small illuminated tree placed on a table surrounded by a family and its dog, all of whom were in turn enclosed by a picket fence. And in 1823 the Society of Bachelors in York, Pennsylvania promised that the decorations on their Krischtkintle Baum would “be superb, superfine, superfrostical, shnockagastical, double refined, mill’twill’d made of Dog’s Wool, Swingling Tow, and Posnum fur; which cannot fail to gratify taste.”

Documents confirm that a Christmas tree was found in the year 1832 in the house of Charles (or German: Karl) Follen, a literature professor at Harvard University of German descent. It had “7 dozen wax tapers, gilded egg cups, paper cornucopiae filled with comfits, lozenges and barley sugar.” And Daniel Pool writes in his little volume on the Christmas tradition in New York, “In the 1830s New Yorkers were venturing across the East River to the (then separate) municipality of Brooklyn to view that city’s Teutonic population’s ‘custom of dressing a Christmas tree.’”

Christmas and Christmas trees still struggled to find their place in America — sometimes, indeed, still drew pronounced hostility. As the progressive writer Lydia Maria Child observed in 1845: “The Puritan blood still flows too briskly in my veins to allow me to relish over much the Christmas tree.” As late as December 1883 the New York Times noted that “comparatively few Christmas trees were exposed for sale this year” and went on with a rather harsh judgment:

The German Christmas tree — a rootless and lifeless corpse — was never worthy of the day, and no one can say how far the spirit of rationalism which begins with the denial of Santa Claus, the supernatural filler of stockings, and ends with the denial of all things supernatural, has been fostered by the German Christmas trees, which have been adopted so widely in this country. … The Christmas tree, dropping melted wax upon the carpet, filling all nervous people with a dread of fire; banishing the juvenile delight of opening the well-filled stocking in the dim morning light, and diffusing the poison of rationalism thinly disguised as the perfume of hemlock, should have no place in our beloved land.

The author’s wish didn’t come true, but the tradition of the trees did not gain popularity in wider circles until the second half of the 19th century. Sometimes trees were introduced in Sunday schools to encourage attendance. As the American cultural historian Karal Ann Marling at the University of Minnesota noted, “Some efforts were made to find a religious justification for decorating them,” which, of course, was difficult if not impossible, given the symbol’s clouded origin. In the 1850s Godey’s magazine wrote about an “orthodox Christmas-tree,” which would “have the figures of our first parents at its foot, and the serpent twining himself round its stem.” Ultimately, Calvinist attitudes took a back seat, as the tree entered the national imagination and soon became the icon of American Christmas, just as it had done in Europe. 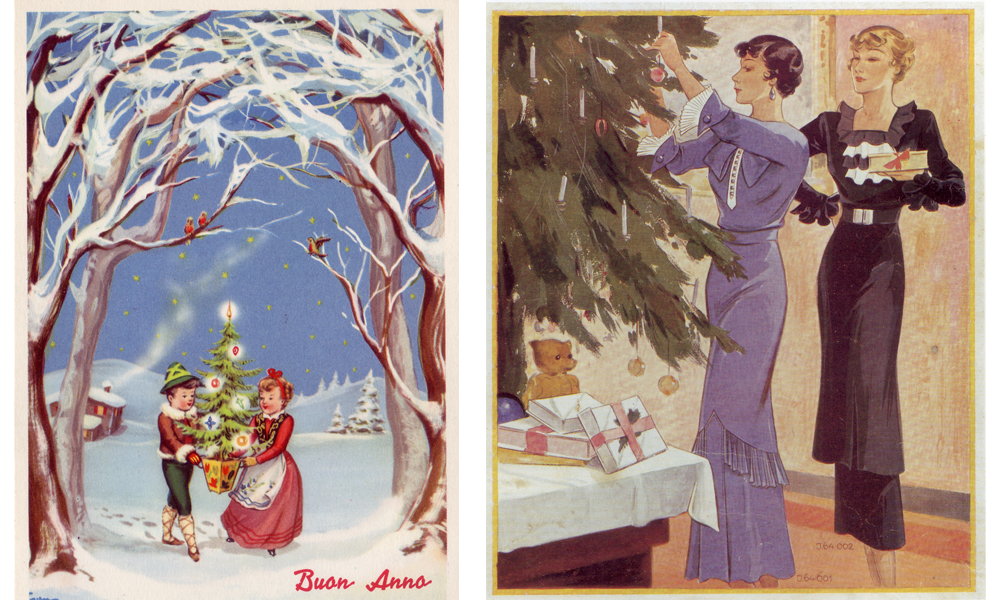 In 1880, no fewer than 200,000 trees were brought from the Catskill Mountains and the whole New England region by train, boat, and wagon to New York City’s Washington Market. In 1895 New England Magazine reported how “eagerly customers flocked to purchase the mountain novelties, at what appeared to the unsophisticated country man as very exorbitant prices.”

The transition from traditional to Christian symbol was certainly a rocky one. And the story continues. Occasionally a Christmas tree is designed in a way calculated to elicit strong emotions. Outré displays in the privacy of one’s home are generally safe from criticism, but public spectacles are almost guaranteed to spark fierce debate. Intense protests broke out in New York in 1998 when AIDS-prevention activists planned to decorate a tree in Central Park with condoms. Incumbent mayor Rudolph W. Giuliani called it “one of the most idiotic ideas” he had ever heard. Despite backing from powerful sponsors including Coca-Cola, the plan was not carried out.

In 2011, a white papier-mâché tree erected in Rome caused such a stir that the city council demanded its removal the very next day. The mayor, Gianni Alemanno, said that he couldn’t stand the obelisk-like thing and requested it to be replaced with a normal fir tree.

And who could have foreseen that decorated evergreen trees would also be found in non-Christian communities, throwing their original significance to the wind? At times, however, its religious symbolism is so powerful that it is unwelcome among certain populations. In Israel, for example, where the Christmas tree only typically appears in Arab Christian households, it is considered damaging to business in hotels and restaurants. A few years ago, trees displayed by the Spanish fashion chain Zara inspired a protest campaign by Israeli Jews. As a result of the demonstrations, the trees had to make way for menorahs. In the meantime, however, Israel’s Chief Rabbinate lifted the ban on Christmas trees in hotels. One of the most expensive Christmas trees was put on display in Abu Dhabi in 2010. Here, in the capital of the United Arab Emirates, a thirty-foot-high tree was erected in a hotel lobby, decorated with pearls, gold, and gems worth $11 million. It was meant to put the customers in a festive mood, but the management was accused of having done a disservice to this Christian symbol: several guests said that it had nothing to do with their concept of the season. Yet complaints about cultural pollution seem ironic in a world where some Westerners trim their trees with Arabian Nights’ baubles decorated with Oriental patterns.

In an era of heightened cultural sensitivity, some yuletide celebrants chose to refer to the “holiday tree” rather than the “Christmas tree,” to avoid offending those who don’t celebrate the Christian feast day. But whatever the tree is called, the associations it triggers remain somewhat unpredictable: it sometimes provokes resistance, or at others, takes on layers of meaning unrelated the ones that Christians attribute to it — this depends entirely on the cultural context.

In the meantime, we may want to lean back and think again what shape a “perfect tree” should take. •