When Denmark realized a few years ago that it had an oyster invasion, it turned the problem into a tourism opportunity, inciting people to gather up the pests and eat them. It wasn’t too difficult: Danes and oyster-eating go way back, at least to the Stone Age, as evidenced by ancient heaps of discarded shells called kjökkenmödding. In 1587, King Frederick II made oyster fishing a royal monopoly — those who broke the law three times risked the death penalty.

For most of their history, Danes ate the Ostrea edulis, a flat species indigenous to Europe that also goes by the name Belon (though this appellation is normally reserved for those that come from an estuary in France). But overfishing, pollution and disease have driven the flat oyster nearly to extinction, so the Pacific oyster, or Crassostrea gigas, is now the type most people eat the world over. Introduced from Asia to the United States in the early 20th century and to France in the 1960s, the Pacific is more resistant to parasites and variations in temperature. However, in some places — including the western coast of Denmark — it has become an invasive species, blanketing the sea floor like beds of concrete. 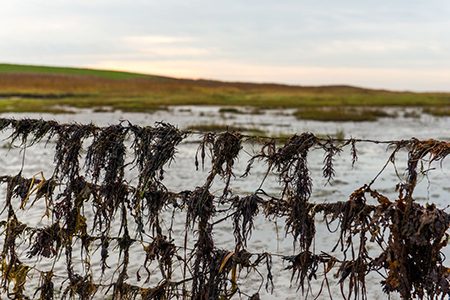 This autumn, I was invited to Denmark’s Jutland peninsula to partake in an oyster safari. The Wadden Sea, part of the North Sea, is a flat, melancholy area with an endless horizon, the water a bluish beige and the sky a beigy blue. The largest natural park in Denmark and one of the planet’s most important tidal flats, it serves as a stopover point for some 12 million migrating birds. Small waders called dunlins, for example, come here to double their weight in ten days during the long voyage from Siberia to the Sahara.

The Ostrea edulis oyster pretty much disappeared from this area after the severe winter of 1929-30. In the late 20th century, after a period of particularly warm summers, Pacific oyster larvae made their way north and settled on the Wadden Sea’s native blue mussel beds. They have few natural enemies here, since their shells are impervious to most kinds of birds. And as their numbers explode (currently there are an estimated 9 to 12 million adults), they are replacing the mussels, an important food source for the birds.

Because this is a fragile, protected area, the Danes can’t just bring in a tractor and haul the Pacific oysters away. So they have created oyster safaris as a gentler alternative, encouraging people to walk out to the beds and pick them up one by one, gathering as many as they can carry back to shore. Most people manage 20 to 40 pounds.

The Wadden Sea Centre conducts these safaris from October to April, and estimates that in seven years, guests have brought home more than 100 tons of oysters. Pictures show many older people, hale and hearty, with smiles on their faces as they trudge four miles to and from the banks, much of the time through frigid waters. Viking stock, without a doubt.

We drove three hours west from Copenhagen to the Wadden Sea Centre where we were greeted by its leader, a smiling, white-haired and bearded nature guide named Klaus Melbye. It is recommended to take this trip with a guide, and only at low tide. “We lose a German every year,” said one of our hosts, and I still don’t know if he was joking. Melbye passed out khaki-colored waders and we started out to sea. 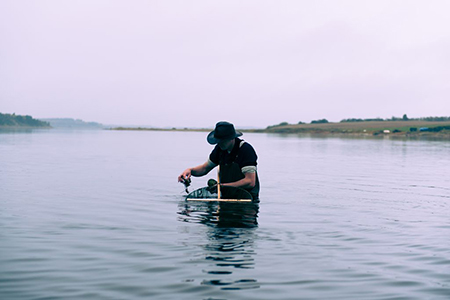 The first part of the walk was relatively easy going, over a large expanse of flat, muddy sand. On the horizon, murmurations of starlings, up to 200,000 at a time, rose together and flew in formation like distant swarms of locusts. After a mile and a quarter the real fun began, as we slogged through chilly water up to our waists for another two-thirds of a mile. “In seven years, I have only had one person fall in,” said our guide. I carefully plodded through the water, doing everything I could to avoid being the second.

Finally we arrived at an old mussel bank exposed by the low tide. Rough-shelled, oblong oysters had taken over half of it, and several were massive — Pacifics can live for 30 years and grow up to 15 inches across. Melbye pointed out inky black spots on their shells and told us they were the beginnings of new oysters. He counted thirty on a single beast. Then he pulled out a knife and eased open a midsized oyster. The flesh covered practically the entire half-shell, and I slid it into my mouth. It wasn’t bad, though a bit large and milky for my taste. A bottle of champagne appeared, and we drank it and ate some more oysters from beneath our feet before wading into the water and heading back to shore. A cold, driving rain started to fall, and by the time we arrived we were soaked. The last thing I could imagine was having 40 pounds of oysters on my back. 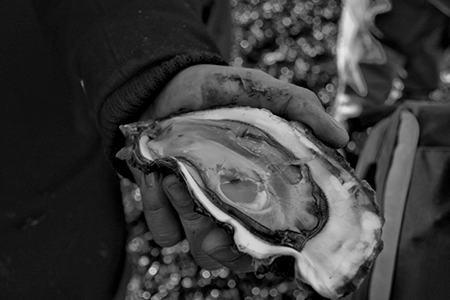 The next morning we traveled three hours north to a shallow sound called the Limfjord, home to what is said to be the world’s largest remaining wild oyster bed for the rare and coveted Ostrea edulis. The Limfjord’s salt content was too low for oysters to survive until 1825, when a storm breached the isthmus and opened the fjord up to the North Sea. Flat oysters arrived about a decade later, probably via the hulls of wooden ships from Norway and Scotland, then intentionally imported from Norway. This region’s geography protects them from the parasites that plague oyster beds elsewhere in Europe, so the mollusks are disease-free, and often used to replenish other stocks.

Here is one instance where global warming has a silver lining: When temperatures rise, the oyster population grows. The Ostrea edulis is a “protandric hermaphrodite,” meaning it changes sex a couple of times per spawning season. But in order for it to go from male to female, the ocean has to be at least 65-68 degrees Fahrenheit for five to six weeks in a row. Nonetheless, this is just about the northernmost climate these oysters can stand. Many years it’s too cold for them to spawn, and their numbers plummet, so they are constantly at risk of dying out. At the same time, it’s the cold that makes them so delicious. They grow slower, have a more concentrated flavor, and the density of their meat makes you realize how flaccid other oysters can be. 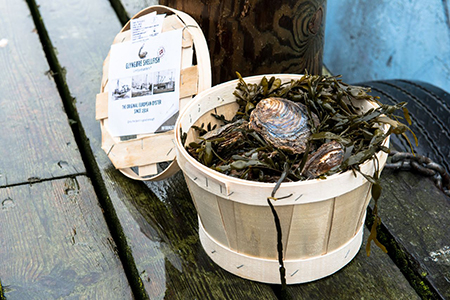 We visited Glyngøre Shellfish, a small fishing operation that supplies restaurants including Noma in Copenhagen, considered the world’s best. Sitting in tanks, the flat oysters even looked more refined than their Pacific cousins, their shells rounder and smoother, with concentric rings and shades of pink and blue. They are pricey, about $4 apiece, and Glyngøre exports them as far away as China.

Glowing with pride, Glyngøre’s owner, Svend Bonde, served us a lunch of Ostrea edulis prepared a variety of ways — with capers, seaweed, aquavit. The oysters were a nice size with firm, pearly-hued flesh that glistened appealingly. Both subtle and intense, their flavor changed several times in the mouth, hitting notes of seawater, iodine and hazelnut. Were they the best oysters in the world, as the Danes like to say? It is certainly possible (though the Frenchman on my left begged to differ). 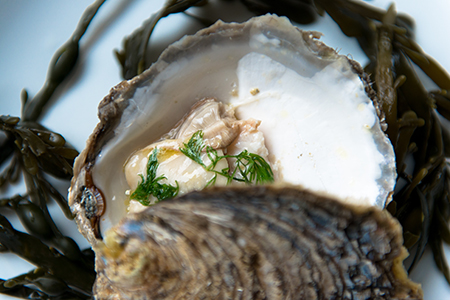 Lunch finished, it was time to don another pair of waders and go hunting again, guided by a ranger named Thomas Johannes Juel Johansen, a strapping lad with an Australian outback hat. This time we would be searching for the Ostrea edulis underwater on the sea floor, not picking Pacifics off the surface of oyster beds like willing maidens.

Johansen had developed his own method for locating the bivalves, peering through a large orange cone fitted with a magnifying glass and using his feet to maneuver those he spotted into a net. The water came up past our waists and was silty, so I couldn’t see a thing and just shuffled about, feeling for hard objects with my feet. My search turned up mussels, seaweed, an empty oyster shell, but no Ostrea edulis. Fortunately, the others were more successful — Johansen pulled up several oysters, along with some live spider crabs, which he invited us to taste. I popped one into my mouth and crunched down. It had the flavor of crab, with spindly legs that caught between my teeth. 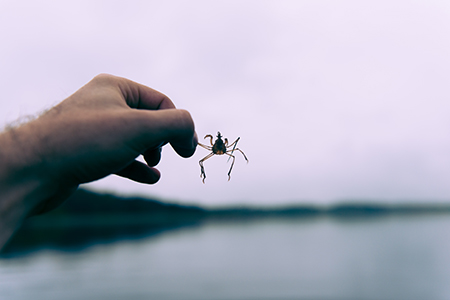 After a while we went back to shore to eat our catch. Johansen cheerfully bemoaned the fact that he hadn’t a girlfriend with whom to enjoy the aphrodisiac effects that evening. Then he advised us it was always best to chew oysters, since they could live for up to eight minutes in our stomachs. So we stood around on the sand and chewed, just like prehistoric man might have done seven thousand years before us.  • 14 December 2012