Allow me to click the flashlight on, shine it under my face, and tell you a tale from a book that is innocuously, simply titled “Sweets.” Steel your courage, friends.

Imagine that it’s oh, say, 1920. You’re a young woman living in Pennsylvania, who has been suffering from poor health. One night, you take five bottles of an herb-and-booze tonic called Lydia E. Pinkham’s Vegetable Compound, which bears the image of a wise, grandmotherly Pinkham on the package. Blotto, you shove a who-knows-what’s-in-it “sanitative wash” from the same company up your lady pocket “as a vaginal injection.” And then… then you PASS A POLYP “THE SIZE OF A HEN’S EGG” OUT OF YOUR VAGINA.

You guys. A HEN’S EGG. Like you EAT FOR BREAKFAST. Breaking off of your vaginal wall and COMING OUT OF YOUR HOO-HAH. If you don’t feel properly scared or grossed out right now, Google “cervical polyp.” Go ahead. I’ll wait.

You back? I’m sorry that I made you do that. But I wanted you to properly understand the juxtaposition of information. You see, that story came from a testimonial on page 27 of the aforementioned “Sweets” booklet, which was sent to me by my mom (who obviously knows me very well and purchases appropriate gifts). Produced by the fine folks at the Lydia E. Pinkham Medicine Company, “Sweets” is a delightful combination of candy recipes with graphic (for the time) testimonials proclaiming how Lydia E Pinkham’s Vegetable Compound cures all feminine ills, from suppressed menstruation (on the same page as peanut butter fudge) to childlessness (peppermint drops) to “flooding,” aka excessive menstruation (cream fruit fudge). 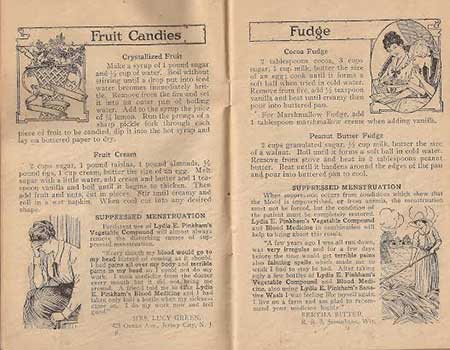 These days, I suspect that any person named and pictured on a product is a marketing fabrication (except for that dreamy Paul Newman, sending us bedroom eyes in the salad dressing aisle). But there was a real Lydia E. Pinkham, born Lydia Estes in 1818. She worked as a midwife and nurse, and in 1843, she married Issac Pinkham, who worked in real estate. And if you believe the heavily padded and company-funded* 1915 biography Lydia Pinkham: Being a Sketch of Her Life and Times, she was the perfect human:

She carried her tall spare figure with a queenly grace… Undoubtedly her strongest trait apart from her devotion to her family was love of progress. The orthodox and the conventional were obnoxious to her.

Basically, the entire biography reads like a college application letter written by a helicopter parent. Pinkham wasn’t actually perfect — she was a believer in phrenology, for one thing. But she did build her tonic — which she originally created to help treat female friends and family — into a $300,000 a year business. The original package slogan was “A Sure Cure for Falling of the Womb and All Female Weakness,” which included nervous disorders, excessive menstruation, lack of menstruation, cramps, backache, menopause, childlessness, tumors, and anything else that could be related to the good ol’ female reproductive system.

But the actual Vegetable Compound isn’t the most interesting thing about Pinkham and her company — it’s how they marketed the product to women. For one thing, “Sweets” is just one of several booklets the Lydia E. Pinkham Medicine Company produced (Harvard has a collection of several online). Like “Sweets,” these publications all combined testimonials for the Vegetable Compound and other products with information on topics of interest to women, ranging from “How to Be Happy” to “Health and Beauty” to, simply, “Facts” (which covers everything from American history to monthly birthstones to the history of Santa Claus).

And here’s where it gets spooky. You see, these booklets weren’t the only way the Pinkham company communicated with women. For many years, the company also ran a service where women could write directly to Mrs. Pinkham for advice on their health problems. But, in a 1906 article for Collier’s, Samuel Hopkins Adams revealed that the Pinkham letters were actually — get this — WRITTEN BY A DEAD WOMAN!

OK, not really (sigh — can’t I just find one instance of a woman providing menstrual advice from beyond the grave?). But Adams did reveal that even though the company had been promoting writing to Mrs. Pinkham for health advice, she had been dead some 20 years. The letters women received were actually produced by “a $10-a-week typewriter, following out one of a number of ‘form’ letters.”

Still, both the booklets and the letters from the Pinkham company provided a great service to women. As this article from Harvard University Library’s Women Working series puts it:

…the Pinkham Pamphlets were a means for distributing important medical advice about menstruation to women in an era when the standard treatment for vaginal cramps was the removal of the ovaries—a dangerous procedure in the 19th century with a mortality rate of 40 percent—as well as a reflection of 19th-century women’s desires to take care of their own health, rather than leaving it in the hands of male medical practitioners.

Despite the good the company did with these (wildly successful) marketing efforts, 1906 also was the year of another setback for the Vegetable Compound. That was the year that the Pure Food and Drug Act was passed, requiring the company to be more transparent about its ingredients. The original Vegetable Compound included black cohosh, life root, unicorn root, pleurisy root, and fenugreek seed. (Black cohosh is still used today to help relieve the symptoms of menopause — studies have shown that it might have some short-term helpful effects). That’s all gravy, but the company was forced to reveal that these herbs were attached to a base of almost 20% alcohol — which shocked the non-drinkers who used the tonic and likely explained why many people thought the stuff worked so well. I notice my cramps less when I’m drunk too.

In spite of these scandals, the company remained wildly successful for several years — in fact, profits didn’t peak until 1925, at a cool $3.8 million. In 1968, the family sold the company; these days, there’s still a Lydia Pinkham tonic sold, but it has a different formulation of herbs and far less alcohol than the original recipe. Since I’m a diligent writer/willing to subject myself to terrible tastes, I purchased some and took it during my last menstrual cycle. I can tell you that it was successful in distracting me from my cramps, but that’s because I was preoccupied by the fact that I willingly drank something that tasted like someone left celery and sugar in the sun to rot.

Thus, if you want a cure for your female ills, I recommend ibuprofen and a heating pad (or a straight shot of whiskey if you want to eliminate Pinkham’s herbal middle man). If you want some neat old-timey candies, Lydia Pinkham has you covered with the recipes below. And if you have a cervical polyp the size of a hen’s egg, for the love of all things Lydia, see a doctor. • 5 December 2013

*The book features eight pages of testimonials for the Vegetable Compound, plus several more pages on the general history of women — in fact, we don’t get into Lydia’s life until page 16 of the slim 30-page volume, and even then, the author is pulling shit like this:

Lydia Estes Pinkham as Lydia Estes was born at Lynn Massachusetts on February Ninth Eighteen Hundred Nineteen, in the same year as Queen Victoria. Britain’s Queen has been called the Mother of the Nation. Her kindly influence and her womanliness endeared her to all the people so.