“In my heart I thought that only beautiful things should be painted, and that only ancient things and the stuff of dreams were beautiful.” Yeats said that once in reference to the Pre-Raphaelites. It’s an absurd statement on the face of it. You can’t just hold out for beauty and dreams. We all know that. We all have to grow up, just as civilization has grown up, moving from the pre-modern days of myth and fable to the enlightened present, a disenchanted era in which we see the universe as it really is. Right?

The Pre-Raphaelites weren’t so sure. In case you’ve forgotten, the Pre-Raphaelites were a group of artists (the Pre-Raphaelite Brethren) in mid-19th-century England who decided that everything in art had gone dangerously off track around the time of Raphael (d. 1520) and in the transition from the High Renaissance to Mannerism. The Pre-Raphaelites thought that they detected, midway through Raphael’s artistic career, an abandonment of naturalism for a dry formalism lacking in emotion, depth, or meaning. They were willing to scrap three or four centuries of art in the attempt to correct that mistake.

If that isn’t radical enough for you, their objections to Raphael also had an explicitly religious foundation. As the great critic John Ruskin—an early defender of the Pre-Raphaelites — explained, the Vatican once invited Raphael to Rome to do some painting. Raphael made a painting that showed the kingdom of theology presided over by Christ on one wall, and the kingdom of poetry presided over by Apollo on the other. The implication, as Ruskin saw it, was that Christ is but one truth among many. And so, thought Ruskin, all that was holy was profaned and mankind experienced a second fall from grace. Ruskin was thus quite enthusiastic about the Pre-Raphaelite rejection of everything post-Raphael, of the entirety of the “modern world” from the early-15th century onward.

At first glance, the art of the Pre-Raphaelites looks as otherworldly as you might expect from their doctrines. Ladies in flowing gowns stare somewhere off in the distance, surrounded by sumptuous details and a prevalence of mist (Dante Gabriel Rossetti’s “Proserpine”). Figures in medieval dress gesticulate in a garden scene painted with the bright and flat luminosity you’d expect to see in an illuminated manuscript from the 14th century (John William Waterhouse’s “The Enchanted Garden”). The real world, the one we inhabit in a day-to-day manner, has been banished altogether. We are, instead, transported by a group of reactionary zealots to a fantasyland past that never existed.

So you might think. But you would be wrong.

As an excellent show at the National Gallery of Art in Washington, D.C. (“The Pre-Raphaelite Lens: British Photography and Painting, 1848–1875”) makes clear, the Pre-Raphaelites were, in fact, heavily influenced by what was at that time the newest of technologies. They loved photography. Specifically, they loved the way photographs captured elements of nature and human beings in such realistic detail. Often, the Pre-Raphaelites tried to make their paintings look like photographs, carefully painting every blade of grass, every fleck of color. One of the paintings in the show, John William Inchbold’s “Anstey’s Cove,” looks as if it might be a touched-up photograph in the way that the shrubs and the water and the birds are so painstakingly rendered. And the photographs Pre-Raphaelites took—like Colonel Henry Stuart Wortley’s “The Clouds Are Broken in the Sky” — have a distinct painterly feel as well. 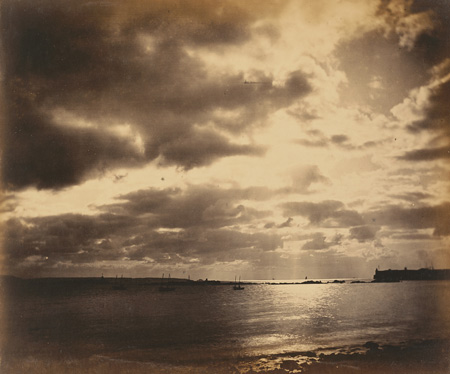 “The Clouds Are Broken in the Sky” is a study in light and horizon that could just as easily have been a painted landscape. Ruskin explained what the Pre-Raphaelites were doing this way:

Pre-Raphaelitism has but one principle, that of absolute, uncompromising truth in all that it does, obtained by working everything, down to the most minute detail, from nature, and from nature only. Every Pre-Raphaelite landscape background is painted to the last touch, in the open air, from the thing itself. Every Pre-Raphaelite figure, however studied in expression, is a true portrait of some living person.

The aforementioned painting by Rossetti (“Proserpine”) is a good example. It seems an untimely study in feminine idealization, taking some medieval romance as its inspiration. It is that, to some degree. These Pre-Raphaelites were, after all, looking backward. But it is also an intense and earnest study of a real person. Her name was Jane Morris. As a photograph by John Robert Parsons from 1865 reveals, Rossetti was paying homage to the look and bearing of Mrs. Morris (wife of Pre-Raphaelite William Morris) as much as he was indulging in medieval fantasies about an imaginary queen. 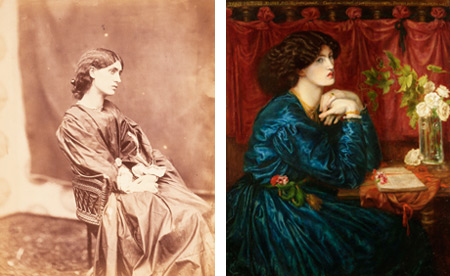 We are thus left with something of a dilemma. We have an artistic movement with a professed desire to escape from modern times and return to a medieval aesthetic on the one hand, and a commitment to extreme realism and immediacy on the other. The house of Pre-Raphaelitism, divided against itself, cannot stand. Unless, of course, those two impulses can go together.

And the two seemingly contradictory impulses of Pre-Raphaelitism do go together if you see the realism as a devotional realism. I mean that in the strict religious sense. I mean it in the way that doing your rosary is “devotional.” Devotion is an act, the repetition of lines of prayer or of psalms that direct one’s mind to the object of worship. And it is in the doing, in the repeating, in the trance-like state that can sometimes be achieved that devotion works its specific “magic.” It is through the intense concentration on the individual elements of the devotion that, so we are told, a transcendent and worshipful state of consciousness is created.

Rossetti was concentrating on Jane Morris like that, as if she were the rosary. Since the Pre-Raphaelites were convinced that the modern world, broadly speaking, was not very good either at concentration or devotion, Rossetti wants to pull Morris away from that world as much as he can. He protects her in medieval garb. The blue robes are like a buffer from the non-devotional realism that the Pre-Raphaelites found themselves surrounded by the English industrial revolution in the 19th century.

In a short story written by Rossetti called “Hand and Soul,” the main character, Chiaro, has had a crisis of faith. His own soul comes to him in the form of a beautiful woman looking, we imagine, not unlike Jane Morris herself. The soul/woman tells Chiaro:

Chiaro, servant of God, take now thine Art unto thee, and paint me thus, as I am, to know me: weak, as I am, and in the weeds of this time; only with eyes which seek out labour, and with a faith, not learned, yet jealous of prayer. Do this; so shall thy soul stand before thee always, and perplex thee no more.

“Paint me thus” could be the rallying cry of all Pre-Raphaelite art. It is a saying that unites the idealism and the realism of the movement under a devotional banner. Dismiss it intellectually, conceptually, all you like. Harder to dismiss are the images that the Pre-Raphaelites created in their devotional inspirations. I, for one, can’t get one in particular out of my head. The home I grew up in happened to contain a small print of Sir John Everett Millais’ famous painting “Ophelia.” I suppose my mother bought it, though I’ve never asked. There Ophelia is, floating down the river amidst luxurious foliage, flowers caught in the water-logged folds of her dress. Her eyes are open in death, or just before it. Every petal of every white flower in the foreground screams out for the reality of this infinitely mysterious scene. It is the first painting I ever loved. I will not be surprised if it is the last image that flitters through my head either, when I too make my way down to the proverbial waters. • 30 November 2010