The Republic of Abkhazia is one of the few countries, if you can call it that, where every tourist who shows up gets a handshake and a friendly chat with the deputy foreign minister. Or rather, it would be such a country, if it were a country at all. A wee seaside strip in the Republic of Georgia, Abkhazia hasn’t yet persuaded anyone to recognize its independence, even though it boasts many of the trappings of nationhood — a president, a parliament, and an army that guards the border in case the government in Tbilisi wants to invade again.

It also boasts grand natural beauty, an ambiguous history as a holiday playland of tyrants and diseased monkeys, and one of the most agreeable climates on earth. In Sukhumi, the capital, I can see why the Georgians have refused to give up Abkhazia without a fight. Wars break out naturally over territory gorgeous enough to fight for. And Abkhazia — a palm-lined coast supervised by a snowy green sierra — is cursed, like Helen of Troy, with enough beauty to inspire bloodshed of epic duration.

Before the war began in 1991, Gorbachev, like Khrushchev before him, kept a dacha here. Stalin kept five, one of which the Abkhazian government rents out to tourists for $50 a night. Still today, all Russians know Abkhazia as the balmiest coast in the otherwise frigid ex-Soviet empire — “a corner of Spain or Sicily,” wrote one 19th-century explorer, “dropped at the foot of Old Man Caucasus.” 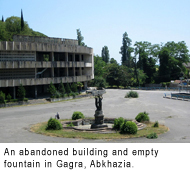 I had been attracted by a more menacing account. Sir John Mandeville, writing five centuries before, described Abkhazia as “quite covered by darkness, so that people outside it cannot see anything in it; and no one dares go in for fear of the darkness.” That report sounded strangely current. For the past decade, Abkhazia has existed in a diplomatic limbo between statehood and submission, blockaded by Georgia from the sea, effectively closed to outsiders. The menace in Mandeville — who went on to say that Abkhazia’s neighbors heard cocks’ crows and men’s voices, but knew not what manner of creature lived there — made me wonder how this land of darkness looked from the inside.

Climatically, Mandeville had it backwards. I crossed into sunny Abkhazia from gloomy, dark Zugdidi, the last town on the Georgian side of the line of control. The Georgian secret police abused me in Russian, then let me pass. Thunderheads muzzled the sun that morning, and I walked across the Ingur River into Abkhaz territory under a drizzle.

My first few minutes in Abkhazia revealed the cause of Mandeville’s bafflement over the men’s voices. In the mouths of the troupe of Abkhazian pensioners who shared my bus, the Abkhaz language sounded dissonant and buzzy, as if they all kept wasps and crickets in their mouths. (It has 64 consonants and only two vowels, so typical Abkhazian villages are cursed with names like “Adzjwybzha.”) Abkhaz signs appeared on the roadside, written in a Cyrillic script modified by a mad array of curlicues.

Clouds followed for a couple hours’ drive through Gal, a heavily mined zone from which the Abkhazians expelled thousands of Georgians at gunpoint during the civil war. The buildings looked derelict and rotten, like the abandoned houses of Chernobyl after 20 years’ vacancy. Abkhazian soldiers along the road waved us past rusty demining agency placards toward the holiday resorts of the capital.

By the time the bus dropped me off in Sukhumi, light had broken through the clouds, and the day had turned hot. I walked from the bus stop into a park filled with the sultry scents of citrus and eucalyptus. A Russian family sat on a bench eating ice cream, which grew sloppy as it melted and won yelps of delight from the kids. I heard the mother call one of them “Dima,” short for “Dimitri,” and I felt jarred to hear a Slavic name, spoken in an accent as crisp as a Moscow winter, amid the lush aromas.

To collect my visa, I walked to the foreign ministry, through an unguarded door at street level that stood wide open to let in the breeze and chase out the subtropical dampness. The ministry felt temporary and blithely ad hoc, just like the quasi-country it represented. It was there that the deputy foreign minister (or someone who said he was) extended a congratulatory hand to welcome a rare foreign visitor. He got me a hotel near the beach, and recommended a five-star restaurant. 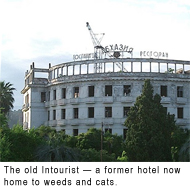 A decade of war has left Sukhumi shabby, run down badly since its Brezhnevian heyday. Windows are smashed and ceilings have collapsed. The old Intourist, an impressive Colosseum of a hotel on the waterfront, is as derelict as Roman ruins, but inhabited by weeds instead of cats. Palms line the esplanade, but the balustrades are crumbling and the waterfront is disfigured with concrete blocks and chunks of corroded metal. If Tbilisi’s tanks do try to come back to Abkhazia’s capital, Sukhumi, they can expect bitter resistance, and this beautiful seaside promenade will be spattered with blood, just as it was when Abkhazia originally fought for its independence in the early 1990s.

I took the deputy foreign minister’s advice and on my second afternoon visited New Athos (Novy Afon), a beautifully preserved monastery up the coast. I declined his second suggestion, the Sukhumi monkey-house. The Soviet Union had exploited Abkhazia’s climate — as agreeable for apes as for Politburo members — to conduct medical research, some of it secret. Ex-staff remember cages labeled “Beware AIDS.” During the civil war, the Georgians rocketed the old monkey-house, and about 7,000 baboons and macaques made an unprecedented primate jailbreak. The beasts emerged stealthily from the mountains to snatch fruit from street vendors for years afterward.

This has not deterred Russian tourists. As Abkhazia’s main foreign patron, Russia gives Abkhazians Russian passports in exchange for visa-free access to Abkhazia’s beaches. (Russian soldiers were deterring the Georgians from behind a machine-gun nest at the Ingur crossing.) Russians who could never afford a vacation on the real Riviera, or who never had enough political pull to get a proper holiday during Soviet times, can now aspire to a little place on the Black Sea Riviera. In Abkhazia you can still buy an elegant two-story seaside villa for a pittance, provided you don’t mind having an angry HIV-positive monkey for a neighbor.

Elegance can come cheap in Sukhumi. Amid the ruins of the corniche, high-class restaurants cater to the Russians. I sought out the poshest and ended up at San Remo, near the opera house. The maitresse d’ led me from a cavernous foyer into a dining room that nearly snow-blinded me: All the furniture was white, including a grand piano in the corner. I ordered a savory Abkhaz corn mush with a side of stewed pork, and Apsny, a sweet local red wine. (Contemplating the wine list, I hesitated briefly, imagining a crimson stain on those white sofas.) The wine was sweet but delicious, and I noted that it was one of the few alcoholic drinks I have seen Russians sip, rather than drain in one gulp. A full meal, drinks included, was a $20 wad of rubles.

Russians crowded the waterfront cafés, and their presence felt oppressive. The bewitching beaches have beguiled them from noticing the bitter irony, that to escape the misery of Mother Russia they make a lavish holiday in a war zone. I minded this irony more than they did. After days in Sukhumi, I had seen aspects of Abkhazia that reminded me of Moscow, of Miami Beach, of the Italian Alps, and of Plum Island Animal Disease Center, but little that was distinctively Abkhazian. 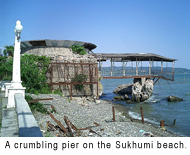 With both truth and lies, Tbilisi has convinced non-Russians to avoid Abkhazia entirely. (Georgian claims of links between Abkhazia and radical Islam were undermined by the generous servings of pork and booze at San Remo.) Abkhazia needs Russian tourism money, and Abkhazians exert themselves heroically to provide the tans and cheap eats Russians crave. But Abkhazians’ own national life is scarcer. Doubly besieged by the Georgian military and the Russian corps of tourists, their distinctive language — which once produced novels, plays, and an epic literature — often needed to be sought out to be heard.

The best I could do to sidestep the Russian influence was to crash a drinking binge underway at Sukhumi’s railway station. The last train having departed for the Russian border, eight Abkhazian track workers were sizzling up dumplings by the platform. They spoke Abkhaz to each other, then switched to Russian for my benefit when they motioned for me to join them. Then they switched back, cackling wildly, when I tried out a few words of Abkhaz. From a brown plastic bottle, they poured out a dry red wine — not Apsny, but a rough concoction they described with a shrug and the word “domashnoe,” or “homemade.” I took photos and offered to mail them copies, but they waved me off, pointing out that part of living under a Georgian blockade is not having an international postal system.

At nightfall, with darkness covering the land, I staggered back to my hotel. This, I thought, was the Abkhazia that had lured me in the first place, the country worth crossing a battle line to visit. I went to sleep content, the taste of consonants and backyard vino still strong in my mouth. • 13 November 2007