In Berlin, the powers-that-be have ensured that the dead live on. I don’t mean with statues — pick any city and you’ll find a plinth topped by a notable erstwhile resident, and Berlin is certainly no exception. No, this city goes further in its national pride by naming its streets, parks, and bridges after long-deceased German luminaries. Writers, politicians, and protestors lend their names; so too — and perhaps more importantly — do the many top-drawer composers and philosophers that have enriched the world and increased the country’s cultural stock. Schubertstrasse, Brahmsstrasse, Schopenhauerstrasse, and Lessingstrasse are not tucked-away lanes but well-traversed streets. To get to one of my favorite bookstores I head along Kantstrasse (one of the city’s main arteries), turn onto Leibnizstrasse, and before reaching the multi-lane chaos that is Bismarckstrasse, branch off onto the leafy calm of Goethestrasse — an enviable address for any bookstore. However, the German polymath is too big to be restricted to one paltry Bezirk: at least one Goethestrasse can be found in four other Berlin districts. At the last count there are nine Schillerstrasses, five Beethovenstrasses, and four Bachstrasses.

Curiously, the only conspicuous omission seems to be Nietzsche. All other famous dead are present and correct. Their talent has immortalized them but their names also live on from being seen, osmotically absorbed and invoked on a daily basis. 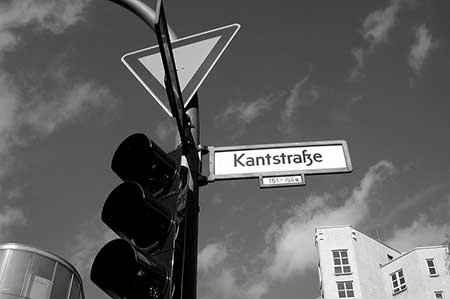 That is not to say Berlin only honors its own. This international city can boast a Shakespeare Platz (unlike London or even Stratford-upon-Avon), a Paul-Robeson-Strasse, a Gorki Theatre, and schools called the John F. Kennedy and Nelson Mandela.

However, lauding the dead is the easy bit. Memorializing the murdered is trickier, and in Berlin’s case, more sensitive. We can make a distinction here between celebration and commemoration: Berlin celebrates the dead through its plentiful street-names and statues but commemorates them in the form of plaques and memorials. And due to the horrors of the 20th century, Berlin is, unquestionably, a city of memorials.

Zerstörte Vielfalt (Diversity Destroyed) has been the 2013 theme of the city, coordinated by the state-owned agency Kulturprojekte Berlin and with cooperation from the Humboldt University. In calling it a year of “commemoration, remembrance and active engagement with history” they manage to cover all bases. Through a series of impressive exhibitions the initiative highlights the social and cultural diversity that was dismantled and destroyed in Berlin by the Nazis. The exhibitions revolve around two prominent dates in the city’s darkest chapter: the 80th anniversary of the Nazis’ accession to power in 1933 and the 75th anniversary of the November pogroms, particularly Kristallnacht, in 1938. The Jewish Museum, the Topography of Terror Documentation Centre, the House of the Wannsee Conference and the Anne Frank Centre are among those playing host. There are art installations, events and activities at key memorial sites and tours down Wilhelmstrasse, the main government road of the Third Reich.

Especially hard-hitting are the open-air portrait exhibitions or urban memorials. There are 11 in total, dotted over the city in specific areas. Each is comprised of a cluster of striking advertising columns — so-called Litfaßsäule, actually invented by a German printer — which give accounts of Nazi-era episodes relevant to that locality, together with photographs and potted biographies of the many that suffered under the regime. Of the 200-plus portraits, some are famous figures like Einstein, Brecht, and Hannah Arendt, who were persecuted but became exiled survivors. Most of the portraits, however, are those of victims, their lives prematurely snuffed out.

The themes at each of the 11 areas range from “Resistance and the Public Sphere” to “From Boycott to Pogrom.” The one nearest to where I live in Berlin-Mitte is entitled “The Path of the Deportees.” The columns, in black, white and red, stand in front of the Tiergarten town hall and under trees now resplendent with the many browns and golds of autumn. The main facts are bluntly reported: 50,000 Jews were deported from Berlin between 1941 and 1945, most to Auschwitz; 30,000 of them departed from the nearby station, now called Westhafen. Amazingly, although the Nazis meticulously catalogued their crimes, not one photograph exists of these mass deportations from Berlin.

The bigger portraits on the columns are emblazoned with the year that person was killed. Two faces, both Berliners, allotted a column each, assail me every time I walk past (which is every day, en route to Westhafen). There is Kurt Gerron (1944), a much-loved actor and singer in 1920s and 30s film, theatre and cabaret, whose biggest performance after The Threepenny Opera was in the propaganda film the Gestapo forced him to make in Theresienstadt to prove to the world its living conditions were humane. Once filming was over, he and the rest of his fellow performers were sent to Auschwitz. The second face belongs to Gertrud Kolmar (1943), a poet who was largely unknown in her lifetime but who is now regarded as one of Germany’s finest. After the Nazis shredded her poems they gave her the new profession of forced laborer, and when her usefulness was up she too was shunted off to Auschwitz. 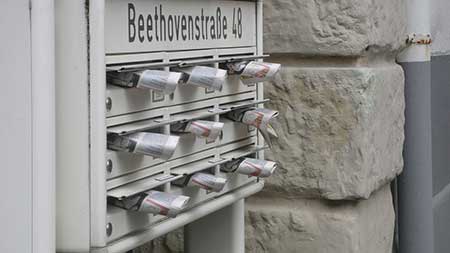 It is easy to get maudlin here. Kolmar’s deep, dark eyes stare out at you. Gerron has the tightest, saddest smile. I’m still not sure what is responsible for diverting the passerby — the expressive physiognomic detail, the somewhat lurid red, the huge-font dates or the incongruous positioning of groups of advertising columns, which at first glance don’t seem to be advertising. Whatever it is, we can’t help but succumb to their magnetic pull. The sight is arresting, the content harrowing, the entire detour rewarding.

But 80 years on from the much-documented horror, does this themed year teach us anything new? It is true that the bare-bones facts remain the same — that pitiable and unwavering downward trajectory of pogroms to ghettos to deportation to death. But these exhibitions have two vital new things to say. Firstly, and more directly, they provide histories of lesser known victims, restoring existences that the Nazis tried to permanently expunge from collective memory. Secondly, and more indirectly, they reveal a new German mindset, perhaps a generational shift, one that is now — for want of a better word — more comfortable at tapping into its calamitous past, as willing to commemorate untold dead in the street as to name that street after a renowned 19th-century philosopher.

There is a German word, Vergangenheitsbewältigung, which roughly translates as “dealing with the past.” Assumed guilt for the Nazi’s crimes has been an issue for the latter part of the last century. In the immediate post-war years the best, maybe the only way of dealing with those crimes was to ignore them. Feelings were still raw, numbed, the crimes too momentous to contemplate. But in later decades, as the war years receded, a readiness to confront and at least attempt to comprehend emerged. In the late Christa Wolf’s recently published City of Angels, the author tackles the past and the question of shame head-on in what is at times painful prose: “How can the survivors live with it? How can we Germans live with it? It is a burden that gets heavier year by year.”

So much for the individual conscience. Berlin as a city, a state, and the Federal German capital has been slow to acknowledge and demonstrate its remembrance of this era in a public and official capacity. The Topography of Terror Documentation Centre, on the site of the SS and Gestapo headquarters, had its first exhibitions in 1987. The Wannsee House Holocaust Memorial, the villa in which the Final Solution was implemented, opened in 1992 — 27 years after a historian’s proposal to turn it into a museum was vetoed by a German government that was as uninterested at building memorial sites as it was tracking down Nazi war criminals.

The most famous memorial, though, was also the most controversial, and as such the one that took the longest to appear. The Memorial to the Murdered Jews of Europe consists of over 2,700 concrete slabs, or stelae, arranged over a great undulating swathe of land once occupied by the Berlin Wall. Building began as late as 2003; it didn’t open until two years later. It is a miracle it opened at all. During the 1990s there were frequent debates as to whether the city needed another memorial. Helmut Kohl torpedoed designs. Eberhard Diepgen, then-mayor of Berlin, boycotted the inauguration ceremony. German novelist Martin Walser viewed the project as yet more “exploitation of our disgrace.”

Perhaps all dissenters were content to make do with the memorial that stands on Steinplatz in Charlottenburg. It was the first memorial erected in West Berlin (in 1953) to the victims of National Socialism. I hadn’t even heard of it: It is attached to no tourist itinerary. The other day I decided to pay it a visit. My wayward route included a stretch of Hiroshima Strasse and the length of Strasse des 17. Juni (“June 17 Street,” the date of an uprising and its violent suppression, also in 1953) — Berlin commemorates events as well as people. The Steinplatz memorial is proof that the authorities weren’t always tardy at initiating commemoration proceedings. But I was surprised by what I saw. It is a memorial stone, an unobtrusive blink-and-you-miss-it structure; a detail of the square rather than its focal point. When compared with the city’s sprawling Soviet War Memorial which opened four years earlier in 1949, the Steinplatz memorial smacks of tokenism. More crucially, it entirely justifies the existence of its greater counterpart, The Memorial to the Murdered Jews of Europe. Here, size matters.

If successive German governments have been slow at fully addressing and commemorating Nazi atrocities, one German man wasn’t. The artist, Gunter Demnig, laid his first Stolperstein, or stumbling block, in 1992 in Cologne. The small cobblestone-sized blocks are embedded in sidewalks and capped with brass plaques, each inscribed with the name of a Nazi victim who previously lived in the nearby building, followed by the dates and destination of that person’s deportation and murder. (Every inscription accurately denotes the victim’s fate as not getötet, killed, but ermordet, murdered.) Demnig had to seek permission for his mini memorial. There are now thousands scattered across Germany. It is tempting to imagine that Demnig was instrumental in kick-starting late flourish of nationwide museums and memorials — quite literally paving the way towards state-organized acceptance and commemoration.

The columns with their portraits of Holocaust victims are to some degree an extension of the Stolpersteine, a means of putting faces to the stones’ names. It is fairly easy to pass the stones without fully taking them in — treading on them, not actually stumbling over them. The columns, on the other hand, are simply too tall and bulky, too eye-catching and in the way to miss. Ten or 15 years ago, this kind of project would more likely have taken place indoors. It is a significant and commendable step forward that these portraits are outside and not in a pay-per-view museum or dusty archive. Like the stones and the larger stelae, they have become street furniture, albeit for one year only, as valid architecturally and as part of the city’s fabric as the Brandenburg Gate or Reichstag.

Theodor Adorno said that poetry after Auschwitz was barbaric. In The Periodic Table Primo Levi tells us that after Auschwitz no one should be unarmed. Fewer poems and more guns is a high price to pay. Arms may well prevent a disaster the magnitude of the Holocaust from recurring but we stand just as good a chance with awareness and remembrance. Berlin’s excellent Diversity Destroyed project promotes exactly that — extensively and openly. • 31 October 2013