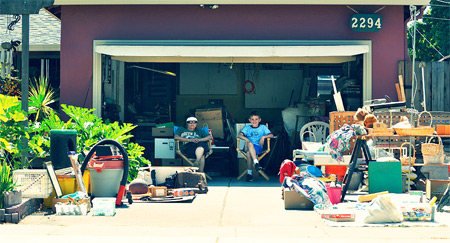 It was a bright yellow table with four sturdy legs. White flowers arched gracefully across its shiny top. Two panels, attached by hinges to the main panel, hung on the sides. Without them the table was square. When the panels came up, the table morphed into an oval-top.

But its best feature was the price. At $5, it had my name written all over it.

I was a newly minted immigrant in this country, on a mission to cobble together the basic household items I needed as a student. A sleeping bag I had brought from India served as my bed. My tiny room had a built-in rectangular closet for my clothes. Reneé, my roommate, had just driven me to a department store where I purchased a fan (for $10, which turned out to be a great value; we still use it 16 years later) to minimize cooling costs. All I needed now was a table to house my books.

On the way back to our apartment from that store, we came across a small house with all manner of stuff on the sidewalk. A young man and a woman ran in and out of the house. Reneé stopped the car and asked if I wanted to look at what they had. Not really sure what she meant, I just nodded. Straightaway she zoned in on a table, assessing whether it would fit in her car.

At some point in the next few minutes I gleaned what was going on. The man and the woman had finished up school and were getting ready to move away. They were trying to sell as many of their possessions as they could before packing up the rest. Five dollars seemed like a great price for a table. Perhaps he saw “poor, desperate student” printed on my forehead. He offered one of the two chairs for the same price. So what if it was a dining table? I could leave the panels down and it would fit perfectly in the corner by the window in my room.

As we stashed the table into the trunk and the chair into the back seat and drove off, the novelty of the situation, the thrill of a cheap buy and the relief at not having to spend any more money on setting up my room in the immediate future brought on a giddy feeling.

It was my first brush with a yard sale. In the intervening years, however, it has become obvious that the yard sale — or the moving sale, garage sale, or rummage sale as it is variously known — is much more complex than someone trying to offload their expendable belongings before moving on.

At a community yard sale a few days ago I talked to one woman who walked or drove from yard to yard. I was on my walk and I ran into her a few times. She peered carefully at the display tables, occasionally talking to the owners. She came away from each yard with empty hands. After about the fourth time of seeing each other, we stopped to chat.

“Are you looking for anything in particular?” I asked.

“Couldn’t you find one in a shop?”

There in lies the enchantment of a yard sale. The prospect of finding something for a fraction of its retail cost. Perhaps the nut cracker was a necessity in her kitchen, but she was willing to wait until the weather turned favorable for yard sales, willing to wait until she could eventually find one that someone else no longer needed. Growing up, her family made the rounds of yard sales every weekend, she said. The habit must be hard to shake off.

It was difficult not to notice the large numbers of immigrant families making the pilgrimage from yard to yard. Being a new immigrant in a rich country is tough, especially in a country that prays at the altar of consumerism and especially in this period of prolonged downturn in which we find ourselves. Most had come looking for clothes, toys, and books for their children. As I watched one of the mothers pick out the clothes for the younger children, the older ones walked around picking out their own clothes and games. The prices were clearly marked on the items, but when the mother went to pay for her purchases, the owner halved the bill. The mother’s face lit up and she walked to her car with a delighted grin. Priceless.

Many would-be buyers walked away unable to find the thing they came looking for. But it was pure magic to bear witness to those moments when one person’s wants dovetailed with another’s surfeit.

A couple of older ladies walked around the tables, their languid gait belying the intensity of their purpose. They were looking for an antique lamp that could make a pair out of one they already had. A man found the study desk he wanted. It was priced at $25. He wanted it for $10. “Come back in a couple of hours and if I still haven’t sold it you can have it for $10,” the owner told him.

A woman drove in from 10 miles away hoping to find a pair of boots but the two pairs on sale in one particular yard turned out to be too small for her. A couple bought a pair of cross-country skis, ski suits, and gloves. A mother bought a coffee maker and a floor lamp for her children. They were going away to college and she was trying to set up their new abodes as much as she could before they left home. A man drove in with a pick-up truck looking for a lawn mower. He found one. A woman bought a stack of children’s books for her granddaughter. Another bought a playpen for her daughter.

A group of high school kids got together, pooled all the stuff in their homes that they (and their families) no longer needed and set up a collective yard sale to raise funds for a trip to Costa Rica their adventure group was planning. A family with grown children sold toys and books that were no longer used. A woman sold her grandchildren’s old toys and her daughter’s books. Lots of families sold old kitchen utensils, photo frames, deck chairs, jewelry, furniture, crockery, garden tools, and stereo systems. The variety was breathtaking.

Why would they not just give it away? This question has occurred to me more than once, especially when I see mounds of clothes on the lawns. But the fact is people do give away their things. Every winter schools here organize clothing and toy drives for disadvantaged families and the donations are more than generous. Then there are the regular donations to the Salvation Army and to churches and community food banks.

The answer to the question came from the lady who came looking for the nut cracker. She said she gave away many things each year, but that some of her belongings held a sentimental value for her. She’d rather see the person she is selling them to and know that the items had some value to the buyer. Even if she ended up asking only a dollar, she derived satisfaction from knowing that the person bought an item because they wanted it.

The yard sale is just about the only place in the U.S. where the art of haggling finds a place. The lady who bought books for her grandchildren bargained the price down to half the listed price. An Asian lady made out like a bandit with three huge pans. It is obvious to all the participants what the purpose of the yard sale is — the sellers want to move the items; they’d rather not take the stuff back into their homes. So the buyers negotiate and are willing to wait until the end of the designated time for the yard sale to move in for the kill.

At the material level, the yard sale is a lesson in economics and resource management, a course in consumer behavior, a way to make money, and yes, a sure-fire approach to getting rid of stuff and clearing out clutter. At the human level, though, it is an intricate web of wants, desires, and needs. And people connecting over mundane objects that once meant something to someone, and if the stars are aligned on that particular day, will continue to have meaning to someone else.

That yellow table I bought all those years ago? Its use reverted to the original intent. When I got married and moved out of Philadelphia, we used it — with the side panels up — as a dining table for nearly four years. Pretty good for five bucks, eh? • 30 October 2009