A few years ago, the journalist Janet Malcolm interviewed the German artist Thomas Struth in Dusseldorf. She accompanied him to a nearby factory where he photographed industrial machines. Malcolm watched from a distance as Struth worked at his meticulous and time-consuming process. At one point in this visit, Struth discussed the work and influence of Bernd and Hilla Bechers, his photography instructors at the Dusseldorf Academy where he studied art in the 1970s. The Bechers produced a huge collection of now iconic black and white photographs of water towers, coal burners, blast furnaces and factory facades gathered from the industrial landscapes of the Rurh valley near Bernd’s childhood home. The work spans nearly three decades beginning in the late 1950s. What they produced were cool and crisp images, repetitive in composition, and nearly hypnotic when viewed together. The lighting is always overcast to avoid shadows. The distance between camera and subject is always the same. The perspective is always slightly elevated from ground level, reducing the subject’s monumentality to a more human scale.

“When Bernd and Hilla made this contract with themselves in the 1950s to catalog these kind of objects,” Struth tells Malcolm, “German photography was all abstract subjectivism.” He added, “People didn’t want to look at reality, because what you saw in Germany in the fifties was destruction and the Holocaust. It was all a terrible reality, so precise looking was not a widespread impulse.”

In Forty-One False Starts: Essays on Artists and Writers, Malcolm relates this encounter with Struth and notes that this precise looking was “a model of ethical rigor.” It was also an approach to history. Their photographs offer images of a fading German industrial landscape, a history that recalls a life before the war. As art historian Blake Stimpson relates, “Bernd once observed that the structures before their camera ‘seemed to us like individuals,’ each one with ‘a look of its own.’” In recording these structures, the Bechers were also wanting us to look at the past. Bernd noted: “I was overcome with horror when I noticed that the world in which I was besotted was disappearing.” Their “precise looking” was a kind of radical longing where history and the present collide.

You can find much of this same precise looking in this small exhibition of the Metropolitan Museum’s collection of Struth’s work. Unlike the retrospective that the museum mounted over a decade ago, this show is more limited in its approach to the artist’s archive. It juxtaposes the small, urban photographs of New York and Rome that he did in the late 1970s, next to the wall sized color image “Pantheon, Rome” (1990) from his famous museum series, which sits across from the moody and casual portrait “Eleanor and Giles Robertson, Edinburgh” (1987), which is not far from “Tien An Men, Beijing” (1997), with its swath of a solid red wall that supports an image of Mao who looks upon sightseers wandering on the grey stones in the square. The mixture of time and place asks us to look not so much at the artist’s evolution, but rather to consider Struth’s approach to photography amidst the historical collisions that make his work both mundane and deeply layered. 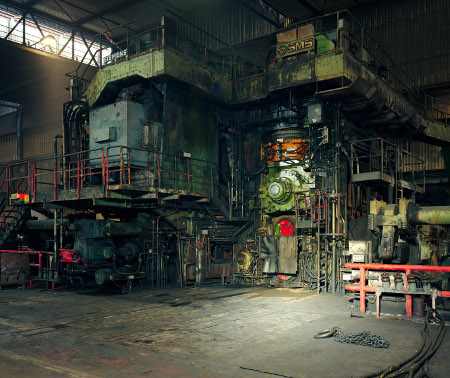 Take his early series of New York photographs. Struth arrived in New York in December of 1977 on a scholarship from the Kunstakademie to photograph the streets of the city. He was only 23 years old. The city was a mixture of decay and decadence, wrapping itself against the winter, trying to forget the chaos of looting and arson that erupted in the previous summer amidst a two-day blackout.

Struth’s black and white photographs make the city look like a ghost town. “Crosby Street, Soho, New York 1978” shows a wide street in the foreground, littered with debris. An El Camino parked on the left side gives the image a distinctive 1970s feel. There is not a human in sight. As the image recedes, the street narrows, and the former factory building facades become a shrinking pattern of vanishing perspective.

Look at “Dey Street, Financial District, New York 1978” or “West 21st Street Chelsea, New York 1978” or “115th Street at 2nd Avenue, Harlem, New York 1978” and the views are all pretty much the same. It is this view that Struth was nearly obsessive about: this vanishing point perspective that he repeated in other cites (London, Paris, Rome) in the 1970s and 1980s. What emerges is a somewhat surreal pattern of urban views, absent human activity, mixing older weathered buildings with the aspirations of modern skyscrapers. The young Struth’s New York cares little for the human life of the city. Rather it presents us with the layers of history built in stone and concrete and steel, conceptual patters of architecture and decay. 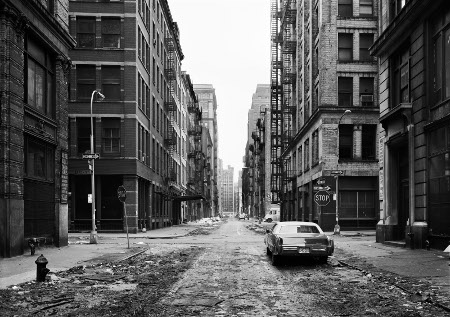 The wall text connects this series with the work of Eugene Atget who photographed the changing and vanishing geography of Paris in the late 19th century with a similarly keen eye for documentation. I was also reminded of Atget’s student and biggest promoter Berenice Abbott, who documented old New York in a series of photographs in the 1930s. Or Walker Evan’s images of decrepit southern plantations in the same period also come to mind. Modernist photographers were often documenting what was disappearing.

For Struth, however, his images seem more self-conscious about their documentary eye. It would be naïve of this work as objective. Rather he was interested in what a documentary photograph could show us, what such precise looking could allow. In their repetitive staging, his urban photographs ask us to look at the city from a similar vantage point, over and over again. What would we see in such a pattern of looking? But they also ask: how can this precise looking capture a longing for the present moment? 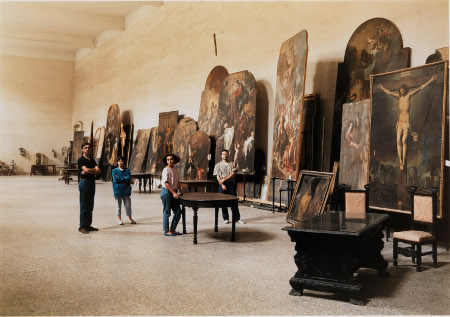 One clear indication that Struth’s documentary style is not simply about photographic objectivity is how his subjects are so clearly trapped in their historical moment. We know these streets of New York could only be from the 1970s. There are few universals in Struth’s work. His subjects appear paradoxically objective and historically subjective at the same time. Unlike the Beecher’s compositional uniformity or even Evan’s distancing gaze on southern facades, Struth’s subjects hold in them a self-conscious awareness of their own time and place, even as the moment is passing. His photographs remind me of what Berenice Abbott once called a photograph’s ability to capture the “vanishing instant.”

Looking at the New York series today, some four decades later, I could only notice what was lost. The view down Dey Street in the financial district ends in a ghostly glimpse of the World Trade Center façade. In “58th Street at 7th Avenue, Midtown, New York 1978” I notice the small sliver of the old New York Coliseum jutting out on the left side, and remember walking past the abandoned monolith on Columbus Circle back in the 1990s. It was torn down a few years later and replaced by the uber-luxurious Time Warner Center with its glass and stone veneer, its five star hotels, penthouse apartments, and upscale shopping mall. Struth’s images of Soho or Tribeca look nothing like those neighborhoods today: consumer spaces filling post-industrial abandonment.

The weight of history fills Struth’s photographs. In “Pantheon, Rome” (1990) the centuries old dome dominates the wall-size work. The small crowd of tourists looks so alienated by the height and weight of history, lost in this moment of looking. This photograph was part of his museum series, photographing the postures and gestures of museum patrons from St. Petersburg to Paris to Florence and New York. We encounter in this series, as we see in “Pantheon, Rome,” a self-reflective sense of our own looking, our own encounters with the art works and the history they conjure. In his large format photographs, we, like his subjects, confront our smallness in front of history’s gaze. 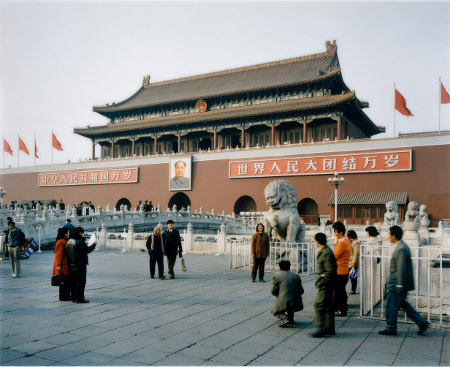 Consider “Tien An Men, Beijing.” We get in this image the juxtaposition of Mao’s iconic official portrait looming over the square as a woman poses for a picture next to a stone statue. The image juxtaposes the personal and vernacular with the official state portrait. Struth took this image a decade after the violent suppression of the student uprising in the square, and it is difficult not to look at this photograph without those earlier events in mind. The wall text tells us this photograph “is a complex, ambiguous meditation on the potential of the individual subject caught in the flow of history.” Sometimes history flows. Sometimes it tramples. What is fascinating in such seemingly mundane moments is how personal and official histories are both anchored to image making.

We see a different kind of history in the portrait “Eleanor and Giles Robertson, Edinburgh” (1987). The aged couple leans against opposite sides of a worn and stained wooden table. Red patterned wallpaper surrounds them. Off in the distance, through avocado green doors, you sense there is a bookshelf groaning. For his many portraits series, Struth would get to know his subjects, spend time with them, before sitting them in front of his camera. He let his subjects decide how to be photographed. Here, Eleanor, calm and elegant, looks directly at us. Giles, in profile, stares off to the side with a relaxed smile. Taken in 1987, the image looks nothing like the era (however we imagine Edinburgh in the late 1980s). They hold instead, as Struth described them, a “form of being in the world we could only imagine in the 19th century.”

It is however, his museum series and his urban portraits that stand out in this show. At a talk at the 2011 Venice Biennale, Struth said of his urban photography: “every building is like a face. Every neighborhood is like a crowd.” The last image of this show bears this out in a haunting way. “Times Square” (2000) centers on the digital façades of the image-saturated square, caught in the early morning light. We witness a fleeting moment of a woman’s face projected on a video screen stretching several stories above a Nasdaq logo. Her head towers over the streets, and dwarfs the logos and advertisements that compose the square’s commercial surround. A few actual humans on the streets cast a blurry movement. But it is the woman’s face, stretched and distorted, that both centers this photograph and turns it into an image of an image, a portrait within a portrait. The photograph, like the best of Struth’s works, offers a moment of visual longing amidst the force of politics and markets, much like the woman smiling for the snapshot in Tien An Mein Square or the crowd gazing upward in the Pantheon, cameras at the ready, grasping for a place in the vanishing instant. • 22 October 2014