Ever since my visit to a home show a few years ago, I have been besotted by kitchens. I fall asleep dreaming that granite countertops will replace my Corian surfaces and that an island will suddenly erupt in the middle of my island-less kitchen space. I covet a breakfast nook. Visions of teak cabinetry and Sub-Zero refrigerators dance in my head. Apparently, I am not alone in my fantasizing. An informal survey of real estate agents indicates that the kitchen has become the crucial room in the sale of a house. According to a friend in the business, my dumpy ’70s-era kitchen is likely to sink the price of my home by 20 percent.

The kitchen now holds sway over all other rooms in the house. What was once a modest functional room, discreetly out of view of the dining room, has now eclipsed this more formal space, if not effaced it entirely. As one real estate broker told me as he motioned to a seemingly endless vista with a humongous island and upholstered bar stools, nooks with lounging chairs, and a vast eat-in area: “Who needs a dining room when you have all this?”

What does the rise of the kitchen mean?

There are those who may argue that the focus on this space reflects a return to more traditional values — to Donna Reed-ish women baking cookies, albeit in Viking stoves. This would conform to conservative political trends in American life — the rise of the kitchen being an indicator that people are receptive to kitchen table politics.

But perhaps because I am not a domestic person and will avoid cooking until I become really hungry, I am inclined to see the rise of the kitchen differently — not as a return to old-fashioned role-playing but as a move in the other direction, toward the erasure of gender-partitioned space in favor of something more egalitarian and inclusive, while also being more about comfort, consolation, and safety. Let me try to support my point with a historical overview.

The ascendancy of the middle-class kitchen can be traced back to the beginning of the twentieth century. We can see some of the nodal points in this evolution in a current exhibition, “Counter Space: Design and the Modern Kitchen” at the Museum of Modern Art in New York City (which runs through March 14th). The show demonstrates that after World War I, both kitchen-ware and kitchen space began to be viewed in original ways. Homely utilitarian items took on some of the quality of objets d’art. Thus we see hanging utensils that evoke Calder mobiles and colorful plastic containers suggestive of Mondrian and Picasso canvases. There is a standing unit in the show, made by the Italian company Spaidero in the ’60s, that turns the entire kitchen into a kind of functionalist ready-made: a movable set of counters and drawers that brings a compact Pop Art sensibility to the kitchen idea.

In counterpoint to this playful aesthetic, the MoMA exhibition also features a “Frankfurt Kitchen,” named for the Frankfurt Movement, a group of German architects in the 1920s who sought to equip the home with elements from the modern factory. Developed by a female architect, Margarete (Grete) Schütte-Lihotzky, the Frankfurt Kitchen is a miniature laboratory. It has a cabinet with aluminum trowel-shaped drawers for pouring and scooping; a sink and dish rack efficiently located on one side of a compact oven and stove; a pull-out ironing board; and a small, low table and chair wedged in one corner. 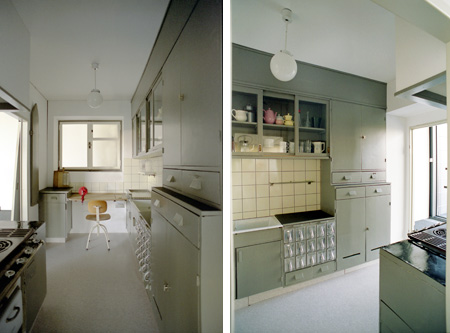 The Frankfurt Kitchen reflects the drive to turn housework into a science that began early in the 20th century. The initial result of this drive, as feminist historians have noted, was to increase rather than decrease the work that women needed to do in the home. If some household tasks were simplified or eliminated through new technology, others that had never been considered now emerged as necessary. Thus, the sheer drudgery of, say, creating a fire in a primitive stove or wringing the neck of a chicken for dinner was replaced with the labor of choosing foods that fulfilled precise nutritional needs, preparing them according to prescribed methods, and using cooking and disposal techniques that were economical and would guard against the transmission of germs. Domestic science, in other words, simply replaced one labor-intensive activity with a more conceptually driven labor-intensive activity.

But the science of kitchen work, complex though it was, had one advantage over previous forms of domestic work: By being systematized, it could be outsourced. Canned and frozen foods came first and were followed by prepared foods of a more elaborate sort, from pre-washed lettuce to macadamia-dusted tilapia fillets. Other aids to kitchen work—from the brewing of coffee to the storing of food to the cleaning and maintenance of cooking surfaces—accompanied the outsourcing of food preparation.

Yet kitchens did not shrink as the tasks associated with them ceased to be central to the life of the home; they increased in size and accoutrements. This may seem paradoxical, but it can be explained if we return to one feature of the Frankfurt Kitchen that prophesied the future: the little chair and desk that, as the promo film for the kitchen explained, allows a woman to remain seated while performing her chores.

This chair is not about efficiency or improving the quality of domestic work; it is about comfort and ease. For though the new postmodern kitchen may give lip service to state-of-the-art appliances, these things are really only the trappings, the high-end props that identify the kitchen as a place of conceptual nurturance.

The vast size, upscale materials, and state-of-the-art technology that characterize the contemporary kitchen attest to this idea. Everyone can gather in this space. The kids can do their homework on the granite countertops; husband and wife can sip their wine on the upholstered bar stools; the guys can watch sports and the girls Oprah on the flat-screen TV.  Mother no longer presides here. This is now everyone’s space, a fully accoutred sanctuary where everything is within reach and everyone is welcome. The large, stocked refrigerator is the temple; the glass and wood cabinets house the sacred relics; and the copper pots hanging from the ceiling are the tribal ornaments. The holy trinity are the microwave that can zap prepared food in a matter of minutes; the coffee maker that turns itself on and off; and the spacious refrigerator/freezer that can preserves food for, like, forever. (The oven which must be included for the sake of appearances is often a vestigial element — I know people who cook “seriously,” but I know others who use the oven as storage space).

In a world strewn with terror and difficulty, surprise and vexation, the kitchen has become the locus of comfort and support, the place to veg out on pre-cut veggies. Is there life beyond the kitchen? Perhaps. It may yet yield to a new space in the home we have yet to imagine. For now, however, it feels like a terminus, where a Gaggenau refrigerator, Poggenpohl cabinetry, and a Technivorm-Moccamaster are the trappings we want for our metaphorical bomb shelter. • 19 October 2010