“We will be very lucky to see the Olive White-eye on the island,” says Diane Laboucherie, my 25-year-old eco-tour guide on Île aux Aigrettes. Though there are only six of the sparrow-sized birds, ranking them as the rarest species on the nature reserve that lies a half a mile off Mauritius’ coastal mainland near Mahebourg, we spot a pair almost immediately.

Flittering from branch to branch, it turns out that they are creatures of habit, and finding them in this spot was no fluke. Minutes earlier, Laboucherie had slipped into the warden’s quarters housing the island’s nine resident biologists and botanists, asking them where we would be most likely to find them. “Just out the front door,” must have been the reply.

A little later, Laboucherie pauses mid-stride and gazes into the stunted bushes lining a cleared path through the middle of the island. With scant soil covering, there’s little undergrowth, so locating two more Olive White-eyes proves to be child’s play, again in an area that she’d been tipped off about by the biologists. The birds stick to the same areas and at the time of year I’m here, they are nesting and so always in pairs.

I’ve always found birds frustrating to photograph. They’re often too small to fill the frame unless you manage to creep to within a few feet of them, by which time they’ve usually flown off to safety. But in both cases here, when I inch forward in readiness to fire off a few quick shots, they barely budge. “The birds here are still very naïve, very tame,” says Laboucherie.

The Mauritius Olive White-eye is endemic to the Île aux Aigrettes, a 64-acre coral island at the entrance to Grand Port, where Napoleon’s French naval fleet engaged the British in battle in August 1810. Just over 200 years earlier, the Dutch were the first settlers on the island, establishing a colony in this same spot. They were succeeded by the French and then the British, all of whom have contributed to the destruction of the Île aux Aigrettes’ native habitat.

The rape of the island’s vegetation and slaying of its wild inhabitants for food over the centuries led to it being declared a nature reserve in 1965, with active conservation through the eradication of evasive species beginning in 1987. Unfortunately, that was already too late for some.

The last known habitat of the Dodo was the Île aux Aigrettes, where it was last sighted in 1681. A bronze sculpture of a Dodo appears in the Visitor’s Centre, its size based on a footprint found on the island. Standing just over three feet tall, it looked like it could have given a nasty bite with its hooked, parrot-like beak, but in fact its docility led to it being easy prey for visiting sailors. And, like other extinct birds that once populated this island, such as the broad-billed parrot and the red rail, it was flightless — presumably a product of evolution due to them having no natural predators there.

While the Dodo may have partly resembled a parrot in appearance, it was in fact related to the pigeon — a scary thought when you think about the mess a Dodo-sized pigeon could leave on your car windshield. But with the Dodo long gone, the pigeon-related focus on preservation has shifted to its pink cousin.

From a total of just nine of the endemic Pink Pigeons remaining in the wild in 1990, a successful captive breeding program has increased their numbers on Île aux Aigrettes to 94, out of an estimated 380 throughout Mauritius. Most of them can be found in the protected Black River Gorges — Mauritius’ only national park. 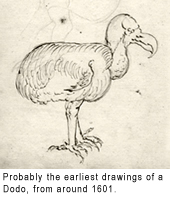 The Pink Pigeon’s main habitat is the ebony tree, and Mauritius’ last remaining virgin ebony forest is a small patch on the Île aux Aigrettes. Early settlers felled the timber for making furniture. Later, it was also prized for crafting woodcarvings. Other trees were stripped to fire the limekilns that were used to produce slaked lime for construction and in the sugar industry, where it was used in the cane juice clarification process. The ruins of one of those limekilns can still be seen near the jetty, in the south of the island.

But the island’s two botanists and their staff, as well as a team of volunteers, are actively trying to revegetate the island by planting seeds collected there. Today, the ebony tree accounts for 15 percent of the island’s total vegetation. Its seeds are also planted on Round Island, another nature reserve off Mauritius’ north coast, and in the Black River Gorges.

As Laboucherie leads me further into the island’s interior, I soon lose track of which direction we are heading in. Though the thin soil covering forces the vegetation to take root horizontally instead of straight down into it, the stunted growth is still high enough to obscure any topographic landmarks on the mainland.

Before long, we come across a bronze statue of a Rodrigues Giant Tortoise, another extinct species that once roamed the Mascarenes (Mauritius, Rodrigues, and Reunion Islands) in large numbers. From a population of 400,000, they were completely wiped out by the start of the 19th century. “They were killed for food and oil,” says Laboucherie. “The oil was used for cooking and to prevent scurvy. Five hundred tortoises were needed to fill one barrel of oil.

“The tortoises, which were also known as Giraffe Tortoises because of their long neck, were brought onboard ships because they could go without food or water for up to six months, meaning they could be killed for fresh meat anytime.”

Moments later, we stumble across a giant Aldabra Tortoise grazing outside a nursery enclosure, where the various seeds are podded and sorted for replanting. There is no natural water source on the island, so liquid nourishment is pumped through a pipe from the Le Preskîl hotel, just across the bay on the mainland.

The 81-year-old, 660-pound tortoise, named Big Daddy, is the oldest and heaviest of 27 giant Aldabra tortoises on the island. In nature, every native species has a function, and since the genetic makeup and behavioral patterns of the Aldabra tortoises are very similar to those of the Rodrigues tortoise, they have been introduced onto the Île aux Aigrettes in an effort to try and determine the original purpose of its extinct, northern cousin.

Clearly, the tortoises feel as comfortable on the Île aux Aigrettes as they would on their native Seychellois atoll several thousand miles to the north. Since 2003, 350 Aldabra tortoise eggs have been collected here, of which 250 have hatched and been transferred to a protected enclosure in the Black River Gorges National Park.

But for some species that were once common on the Île aux Aigrettes, the conservation efforts of recent decades have been a case of too little, too late. The scops owl, Lesser Mascarene fruit bat, Rodrigues Giant Gecko, and Mauritius Blue Pigeon were all casualties, either directly or indirectly, of man discovering this smattering of paradise in the Indian Ocean.

The advent of human settlement introduced stowaway rats and monkeys onto the island, which would steal birds’ eggs and ravish the vegetation. Upon exiting the Visitor’s Centre, the first animal we spot scurrying through the undergrowth is a feral Indian shrew. Laboucherie also talks about chameleons, which, although seemingly harmless and pedestrian, has a taste for birds’ eggs, thus affecting population growth.

While such feral animals are slowly being eradicated, the more than 30 staff who work on the island on any one day concentrate most of their efforts towards preserving native species, such as the Mauritius Fody, Echo Parakeet, Telfair’s Skink, and the Mauritius Kestrel, whose numbers had dropped to just four worldwide in 1974 (there are now more than 1,000).

Of those, the Mauritius Fody and Telfair’s Skink, which grows to about a foot in length and numbers more than 1,200 at last count, are by far the most visible. As well as the ebony tree, the biologists have narrowed their focus to preserving several pandanus varieties and the Oeniella Aphrodite, a rare type of orchid that grows in the ebony’s tree cavities.

Symbolic of man’s destructive presence on the Île aux Aigrettes is an artillery gun pointing out towards the Indian Ocean at the northern end of island. A remnant of the British military occupation during WWII, it is a stark reminder of our scant regard for the environment around us, and each other. • 25 January 2008