Last week in Washington, D.C., down the street from Ford’s Theatre and the house where Lincoln died, and around the corner from the Hard Rock Café, and around another corner from the ESPN Zone, a new museum opened. It was the seventh branch of the famed Madame Tussauds — the international wax outfit with shops in London (of course), as well as Shanghai, Amsterdam, Hong Kong, New York, and Las Vegas. 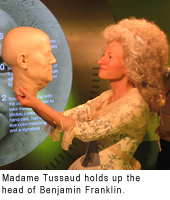 To be honest, Madame Tussauds isn’t exactly a museum. And to be completely fair, it doesn’t even make that claim, referring to itself instead as a “wax attraction.” But potato/potahto — waxworks remain popular. There’s the Hollywood Wax Museum, with satellites in Branson, Missouri, and Gatlinburg, Tennessee, and figures of W.C. Fields, Antonio Banderas, and the Rock. There’s the Wax Museum at Fisherman’s Wharf in San Francisco, with figures of Toulouse-Lautrec and Donny Osmond (Brittany Spears, according to its Web site, being “Out for Make Over”). There’s the Musée Conti Historical Museum, which uses wax figures to relate the history of New Orleans. And there are many, many more around the world.

But why? At a point when no face worth knowing is unknown, when we have visual insight into the lives of the famous and powerful to the level at which we know — can actually see — what some of them do in bed, how is it that wax museums are surviving, and that new ones are actually opening? Who needs, or wants, to see a life-size wax version of Hillary Clinton, or Robert E. Lee, or Babe Ruth? I hoped Madame Tussauds in Washington might provide some insight.

The opening night party had all the mock glamour of a mock movie premiere, complete with a street lane closure, faux velvet stanchions, a red carpet, and one of those rentable spotlight machines that lets people in far-away parts of the city know something important is happening somewhere else. There was even a celebrity in attendance. Or, more accurately, a famous person. Or, to be honest, a person whose name people know: Marion Barry.

Barry, of course, is the former D.C. mayor who achieved notoriety outside the capital when, in 1990, a FBI sting captured him on camera smoking crack cocaine. But Barry stung back. In 1994, after serving six months in jail, he won a fourth mayoral term. In 2004, he won a seat on Washington’s City Council. And this year, he beat out Cal Ripken, Carl Bernstein, Nancy Reagan, and Oprah Winfrey in a public poll that chose Tussauds D.C.’s 50th wax figure.

Barry unveiled his own figure on the red carpet the night of the gala opening. He reveled in the attention, petting the figure’s head and kissing it on the cheek for the cameras. I watched from a fence behind television cameras, with the general public. People ooh-ed and ahh-ed at just how lifelike wax Barry looked. They pushed against the fence to take photos, and held their children up above the cameras to take photos of the man and his wax counterpart.

“That’s amazing,” one woman said to me. “That…is…amazing. He’s smiling and everything,” she said, referring to the figure. 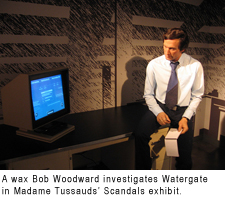 The party, by and large, involved people eating duck spring rolls and having their pictures taken with the models. This is easy to do at Madame Tussauds: The figures are not set apart in displays, but are placed around each room. The public is free to kiss, hug, feel, or feel-up every one; Tussauds employees, one told me, clean the figures every night, and touch-up paint when necessary.

The pricetag of this freedom, however, is the overwhelming number of bad jokes such interactions prompt. I sat down on a couch in Glamour at one point, a figure of Madonna at the other end. She was spread-legged, her pants low and her top buttoned just barely above her bust.

“Do you know who that’s supposed to be?” one man asked me.

I told him it was Madonna.

“Oh, strike a pose, right?” he said, and winked and elbowed the air.

Another woman walked up, eating a scallop wrapped in bacon, and asked, “Do you feel like you’ve died and gone to heaven?” I laughed politely and just said, “I know. Yeah.” That’s what it seems you do at wax attractions.

Poor Marion Barry seemed to be suffering the same plight. Walking through the exhibits, I found him moving from figure to figure for cameras, under the direction of his handlers. At George H.W. Bush, a photographer asked, “Marion, what would you like to say to him?”

Barry wagged his figure in Bush’s face and said, “Tell your son to stop the war.”

At Reagan, a photographer told Barry she wanted him to him to kiss the former president. Barry said he wouldn’t. At Ella Fitzgerald, photographers took a few pictures before an assistant rushed in and grabbed a napkin from Barry’s hand. Then the same assistant took the 71-year-old, who by this time was walking with a slight limp, at the arm. “Okay, let’s go to Thomas Jefferson,” he told the former mayor, and off they went to take more photos with a wax version of the third president.

Madame Tussaud, born Marie Grosholtz in 1761, was exposed to wax at an early age. Her mother was the housekeeper of Philippe Curtius, a doctor whose recreations in the medium were explosively popular with Parisians during the cultural and social upheaval at the brink of the French Revolution. As tastes in fashion and hairstyles changed, so too did interest in celebrity, especially the celebrity of figures outside the Royal Court — Tussauds’ first models were Voltaire, Rousseau, and Benjamin Franklin. She later moved to England, where she grew her entertainment empire with figures of British royalty and murderous criminals.

In Waxing Mythical: The Life & Legend of Madame Tussaud, Kate Berridge writes that the driven businesswoman, though famous herself, doesn’t get a fair shake today:

She has suffered from the prejudice that still treats popular culture as an embarrassing nouveau-riche relation to art and culture proper. The celebrity-filled waxworks presented under her name are all too readily written off as a flashy, frivolous entertainment. This is to underestimate their original function in a period with a limited pictorial reference, when they supplied a visual narrative of events.”

But if that was the figures’ original function, it’s lost today. The morning after the gala, when the museum opened to the public, a line of visitors wrapped around the building. Once in, they followed the same path as partygoers the night before. One woman pushed a breast up against Bill Clinton’s outstretched hand, a shocked look on her face as a friend took a photo. Another cried, “Move over, Jada!” as she leaned in close and put her arm around Will Smith. One man touch Jennifer Lopez’s rear-end, which wasn’t as dirty as it sounds, since J-Lo’s positioned so that her ample rear faces the entrance to Glamour, her eyes peering seductively over her shoulder. I talked to a woman who been scolded by security at George W. Bush. “I put my fingers up his nose for a photo,” she told me, “but the guy said not to do that. He said that’s the softest part of the body.” Most people overlooked the placards by each figure that offered up fun factoids — Katie Couric was in a sorority at the University of Virginia, Bush was the first president to run a marathon, etc. — and the wrong birth date for George Washington — February 28, 1732, instead of February 22. 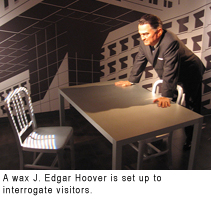 The interesting thing about the wax attraction is that they’ve created “experiences” for even better photo opportunities. You can sit in a chair next to Lincoln and have a picture for the refrigerator that looks as if you were actually there, just seconds before a bullet entered his head. You can sit on a bus seat next to Rosa Parks; when you do, there’s a kicking motion from behind, and a recorded voice threatens to call the police if you don’t get up. You can putt a golf ball next to Tiger Woods. You can answer four recorded questions about the museum at Katie Couric (the voice, alas, being a man’s, and not Couric’s.) You can even sit at the desk of the Oval Office, and buy a professional photo of the scene as you exit through the gift shop, like you do at roller coasters.

People, it seems, love these kind of scenarios, and are willing to pay $25 for the opportunity to put themselves in them. On my way out, I met a man who asked me to take his picture at Evander Holyfield. The wax version of the boxer actually has a piece missing from the right ear, where Mike Tyson bit it off. I asked the man if he wanted to pose like he was biting the ear. He thought it was a funny idea but was ultimately too short — he would have ended up looking like he was nibbling the bottom of Holyfield’s ear, instead of tearing off the top.

On my home from Washington, I stopped in Baltimore at the National Great Blacks in Wax Museum. Coming off Beyonce and George III at Madame Tussauds, Great Blacks in Wax is a sobering tour, right from the get-go. The museum is far from the more tourist-friendly Inner Harbor, where paddleboats splash around the water below the National Aquarium. It’s located in an old firehouse set among row homes in one of the city’s poorer neighborhoods. Upon paying the $12 entrance fee, under a towering depiction of Hannibal on elephant-back, you’re given a single-sheet, photocopied tour guide.

Great Blacks in Wax provides wax interpretations of the many terrifying chapters in black history. A sign at the entrance to the Lynching Exhibit warns that it contains “very sensitive and potentially disturbing scenes”; children under 12 are not allowed in, and children under 16 must be accompanied by a parent.

Once inside, it’s clear why. There are wax figures of lynching victims — one a woman, burned, her legs severed and a baby cut from her stomach; the other a man, hanged, his genitals cut off and lying on the ground. A case contains the “souvenirs” taken by perpetrators from lynchings: eyeballs, male and female genitals, ears, fingers. It’s a terribly disturbing scene.

Much of the museum, however, is more uplifting. It features notable black scientists, authors, politicians, and religious leaders, with signs explaining who they were and why they were significant in black history. And it’s through the highs and lows of that history as portrayed here, more so than by Madame Tussauds, that the real value, and appeal, of wax museums reveals itself.

Despite the rise of an overwhelming pictorial reference, and maybe even because of it, there’s something about pure representation, about a physical object that looks exactly like the thing it represents, that draws us in — sometimes laughing, sometimes cringing. At other museums you can see the coat Famous General wore in battle, or look at the desk where Great Writer created his masterpiece; you can read about brutal lynchings in books or on the Internet. But seeing an exact replica of the person, or the thing, is often the closest we can get to that person, or that thing. Whether the subject is soft (Tom Cruise) or hard (slavery) is irrelevant. For centuries wax has been able to make tangible the things we think about everyday, and the things we need to be reminded of.

Great Blacks in Wax, for example, has a walk-through slave ship. At one end a wax figure is being thrown overboard; below him, a hand sticks out of the bloody water, sharks circling. I walked through with two black elderly couples. They didn’t take any photos. They breathed deeply and sighed, but didn’t speak the entire time. • 10 October 2007