I watch an 18-month-old girl hold tight to her father’s hand as she waddles over to the decapitated goat. Blood, oozing from its neck, has coagulated; flies land furiously on the bright red stump where the head once was. The little girl stops to stare at the carcass a few inches away from her feet. I’m transfixed by her little white shoes, the blood, and the motionless, hairy carcass. Her father is busy on a cell phone, talking distractedly while the little girl swerves slightly, catching her balance. 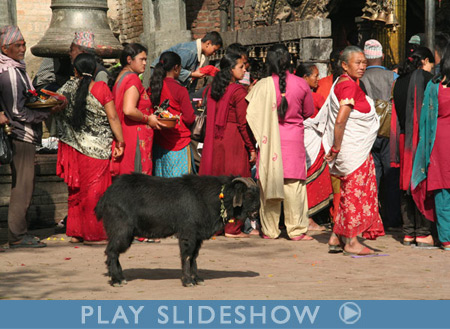 It’s a busy sacrifice day at Ganesh’s Surjya Binayak temple in Bhaktapur, Nepal. Barefooted women in red saris, young men and women in jeans checking their cell phones for messages, and children in their Sunday best all line up at the shrine to make offerings to Ganesh — protector, facilitator, and god of good fortune. The elephant god is much revered in the Kathmandu valley and he is consulted on every major undertaking. Devotees visit his ubiquitous shrines daily, but Tuesdays and Saturdays are the most propitious days for soliciting Ganesh’s favor. The Surjya Binayak shrine is hopping on this holiday Saturday.

There are two main activities at the temple today. The first is dominated by the women in red saris who seek to please Ganesh with delicately arranged puja plates containing rice, eggs, fruit, flowers, and pudding cups with a coin pushed into the gooey center of each dessert. They will smear Ganesh’s image located in the inner sanctuary of the shrine with rice and powder, and they will leave behind the flowers and the contents of the tray. This is how they perform puja — the act of communicating with the divine symbolized by a spot of red powder on the forehead of the devotee. Red is the color of life. A married woman wears a red sari to show she is vitally engaged in life as wife and mother. Indeed, this particular Ganesh shrine is visited by newlyweds eager to get a good start. A red dot on the forehead on this auspicious day is particularly propitious.

The other activity in full swing when I arrive at the shrine is ritual sacrifice. Faithful farmers grouped into teams from villages near and far bring chickens and goats to sacrifice to the god. They have waited for Ganesh’s feast day, capping a long process of devotion and pilgrimage that coincides with the arrival of the spring equinox. The plump Ganesh loves to eat: The way to his heart is through his stomach.

Ganesh is the son of Shiva and Parvati. Believing Ganesh was the offspring of an infidelity, Shiva cut off his son’s head in a fit of jealousy. Remorsefully, he searched for the head but couldn’t find it. He replaced it with the head of the first animal he saw — the much loved and respected elephant.

The teams emerge in single file from the traffic chaos on the torn up road between Bhaktapur and Kathmandu. It’s being rebuilt for Nepal’s Tourism Year in 2011. The teams’ destination is the main sanctuary on the leafy hilltop just outside Baktapur’s city limits where Ganesh’s shrine has stood for centuries. The goat is the star of the spectacle and therefore one is given the privileged position at the head of the procession, followed by a group of percussion musicians. Along the road flower vendors arrange colorful bouquets for devotees to buy as offerings for the god. Some of the goats wear a garland of marigolds. Stairs lead to the top of the hill where a sadhu sits motionless beside a basket into which visitors toss rice and coins. It’s a feast day and everyone’s happy and excited for the opportunity to connect with the jovial Ganesh.

At the shrine the village teams wait their turn to sacrifice. Their families and the goats mill around as the men organize themselves. A blood-drenched stone in front of the shrine serves as the altar. During the hour I’m there, eight goats and several chickens are offered to Ganesh. More arrive as I leave. It’s a constant turnover. While the chickens sense something’s up, the goats, even as they are led to the altar, seem oblivious to their imminent destiny. I watch them intensely. They chew on sweet leaves lovingly tucked into their mouths by a team member. I feel perturbed knowing they are going to die in a few minutes while they themselves have no clue. It’s better that they don’t know, I tell myself.

It’s only when they are grabbed by the legs and picked up that they protest with loud squeals. Two men tilt the goat upside down while the shrine attendant steps into place, straddling the animal now in position for a clean cut to the throat. The knife is short with a wide blade and a sharp tip. The squeals stop. Blood squirts into the crowd. A young man in jeans and a white T-shirt jumps back in an unsuccessful attempt to avoid a gushing stream of blood arching through the air. Oohs and aahs emanate from the female devotees as the bright red droplets seep into the denim. They know the blood will be impossible to wash out. Friends snap a picture of the young man smiling and shrugging his shoulders as if to say, “What can you do?”  A boy, all dressed up in a suit and firmly holding onto a rope, is dragged to and fro by a jaunty black goat. It is goat number six.

People crowd around and talk excitedly. Rows of oil lamps twinkle, incense smoke billows over the shrine, friends greet each other, out-of-town visitors take pictures of themselves in front of the altar, women put the final touches on their puja plates, the shrine attendant washes his blood-soaked hands. The sacrifices proceed with surprising regularity and efficiency. In a few minutes, numbers six, seven, and eight are flipped upside down and unceremoniously dispatched.

The headless goats are carried upside down by the legs to the side of the altar where the little girl stood with her father. Now a four-year-old boy is watching a headless goat as it is set down on the ground. He frowns and glances up at his big brother standing beside him. Someone places the head next to the carcass. I notice the goat’s tail has been cut off and placed in its mouth. The boy’s frown deepens. A team member deftly cuts a slit into the goat’s underbelly. He reaches in with two fingers and pulls out a long white intestine. With the help of another team member, he stretches out the bowel and blows air into it. The opaque membrane blows up like a long, thin balloon, the type you can twist and turn into animal shapes. I’m distracted by a woman who walks by with the head of goat number six on a puja plate. She adjusts the marigolds and rice around the goat’s head. Her team has bestowed her with the honor of presenting the offering to Ganesh.

Her bangles tingle as she walks past me to the shrine where other devotees are waiting in line. She takes care not to step in the blood around the altar. She quickly disappears into the crowd around the inner sanctuary where she will perform puja, pronouncing prayers and incantations, touching the sculpture of the god, touching her forehead and chest. She will light a lamp, ring a bell, and leave some tasty tidbits for Ganesh to enjoy, including the head of goat number six.

The carcass is carried away through a gate. A team member explains what happens next. It’s spring, it’s a feast day; Ganesh’s appetite has been appeased. The villagers and their families will cook up the goat and have a picnic on the surrounding hilltop, content in the knowledge that they have performed their duty to ensure a bountiful spring. One goat will feed over 20 people. The animal costs 6,000 Nepalese rupees and is no small offering in a country where the average worker’s daily earnings is 300 rupees (about $4). Factor in the cost of transportation and accommodation for the team and the sacrifice becomes a hefty commitment, one some Nepalese feel is an absolute obligation.

Nepal is one of the few places in the world where the ancient ritual of the sacrificial lamb, an expression of our primal need to connect with the divine world of nature and expiate our guilt for killing living creatures, is still practiced with regularity and nonchalant reverence. Before I go, it occurs to me that perhaps I, too, should leave something for the protector, the facilitator and purveyor of good luck. I drop some bills in the sadhu’s basket. He springs to life and thanks me with a blessing. Three more goats are making their way up the steps — a grand feast for Ganesh. • 19 August 2010