Fair warning: I’m about to use a short phrase, consisting of two words, each of which are so excruciatingly dull that reading either one could very well cause you fall into an extended slumber, like Dorothy approaching Oz. Combined, they may induce a coma. Proceed at your own risk.

Also, I will be writing about Cincinnati.

Still with me? Good, because Cincinnati is a pretty fascinating place if your interests run to the history of walking in America in general, or, say, pedestrian infrastructure in particular. It’s home to a couple of groupings of artifacts that bookend the highs and lows of American walking culture over the past century and a half.

Let’s start the tour at City View Place, at the edge of the Clifton Heights neighborhood, which I visited a couple of weeks ago. The most interesting thing about this short block is that it wholly lacks a city view. It’s actually at the bottom of a hill. But it ends at a long set of concrete steps that ascend a steep hill. These steps rise through a dense wood — I didn’t realize how shady and dark it was until a cardinal flew past, startling me with its sudden brightness. A few steps later — presto! — I was in another old neighborhood atop a hill filled with elaborately mansarded houses. 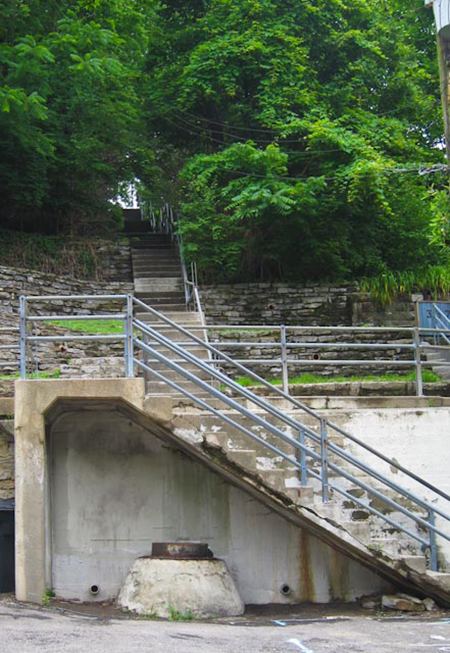 Being the City of Hills, Cincinnati actually has a lot public steps that lead from one neighborhood to another, like wormholes between car-oriented dimensions. These began more than a century ago as simple shortcut for those on foot. They proved slippery in the rain, so over time wooden steps were built. Wood steps proved rot-prone, so over time the city replaced them with concrete. Many of these were constructed as New Deal projects starting in the late 1930s, but a few wooden steps persisted into the 1980s. 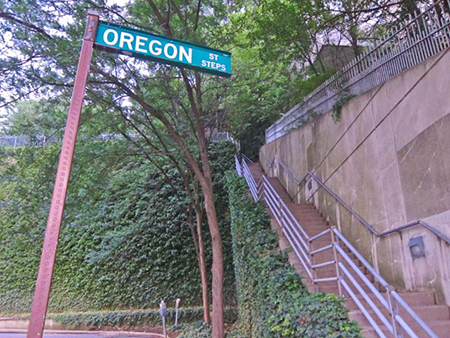 At its peak, Cincinnati had some 400 flights of stairs, for a combined total of some 16,000 steps. By any measure, that’s a lot of steps. If you ascended all of them you’d walk the equivalent of two miles into the sky, which is sort of like walking from sea level to the top of Mount Baker in Washington. Most steps were given names, like Fawn Alley or Hiram Street Steps. Many are now abandoned or overgrown, but others have been kept up nicely.

These outdoor stairways aren’t strictly a Cincinnati phenomenon. You can find them almost anywhere in America you find a city and a hill. There’s even a website “devoted to the discovery and documentation of major outdoor public stairways anywhere in the world.”

In Portland, Oregon, you can take guided walking tours of hidden stairways, and in Seattle there’s Stairway Walks Day, with group hikes based on a new guidebook. Los Angeles — a place more than not lampooned for its auto idolatry — once had about 200 public staircases. A guidebook to L.A. stairs was published in 2010, bewitching a growing cadre of stair groupies, and spawning “A Hidden Stairs of Los Angeles” Meet-Up group that numbers 1,200.

With the help of a 1998 guidebook, I set off in search of other city stairways in Cincinnati, and scrambled up and down quite a few. It was not only good for the glutes; it was strangely uplifting. The steps recalled a time when city government responded to a commonsensical need, as well as a time when people walked everywhere as a matter of course. These weren’t freestanding recreational paths designed for people in swaddled in Gore-Tex and isolated in earbuds; they were connections, part of the mycelium that tied a city together.

Which leads me to the other type of pedestrian infrastructure I explored while in Cincinnati.

The Skywalk was completed in 1997 connecting 15 downtown blocks, and comprising a network totaling 1.3 miles. Mostly, that network runs indoors through the second floor of various buildings with aquarium-like sky bridges linking one structure to the next. A 1982 travel story recommended the Skywalk for a visitors keen on exploring the city, noting that it connected “three hotels, four department stores, three banks, a dozen or so eating place and specialty shops. A portion of the Skywalk looks out over Fountain Square.”

I started at my hotel, and set off into a hermetically sealed world. I quickly learned it had long ago lost its gee-whiz, Jetson-age sleekness, and now felt dated and antiquated. It’s essentially a dystopian Habitrail for humans.

In one segment, between a hotel and a convention center, great puddles spread across the indoor walk from leaks following that morning’s rain. Some windows were fogged up, shielding views of the street. It smelled like a poorly stored sleeping bag. Moving through the air-conditioned mezzanines of hotels and malls, and then back into skybridges through sets of double doors was like passing through pressure locks, each with their own smells and temperatures and stuffiness levels. Nothing about it was natural or inviting. 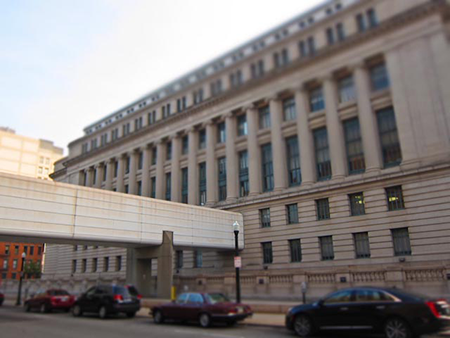 (Later that day, I also marveled at a second-story connector, independent of the Skywalk system, at the Hamilton County Courthouse. The east side of this sophisticated neoclassical building is pierced by a menacingly long and windowless tube that links to a parking garage. It looks like the rostrum of an assassin bug stabbing into its prey to suck out its innards.)

For a brief time, in the 1970s and 1980s, skywalks and sky bridges were all the rage, like macramé and pukka shells. They offered salvation for declining cities, and cities in turn embraced them — most notably Minneapolis, but others also struck up dalliances, including Denver, Rochester, Memphis, and Atlanta.

Described at the time as “graceful slivers of of glass and steel,” they were lavished with awards by architecture groups and hailed as victories in the battle to reclaim urban life — “building owners will have to install walkways just like air-conditioning,” predicted the Minneapolis city engineer.

In truth, sky bridges were an admission that urban life had failed, and an alternative needed to be created. City streets would be open-air sewers for the flushing of cars and the buying of crack. Real citizens — the kind who shop and wear hard-soled shoes and work in office towers — would be given their own enclosed universe above the dregs.

On one open rusting skybridge segment near the convention center, I leaned on a rail and watched from above as a trio of extravagantly tattooed young men with skateboards valiantly sought to convert a low outdoor sculpture into cement dust amid much grunting and the echoey clatter of failed moves. It was like being in a zoo, looking down into the lion pit as the beasts roared and preened.

Skyways fell out of favor when planners saw that they sucked more life out of the city than they injected into it. Five years after Cincinnati’s Skywalk was completed, the city’s new master plan called for it to be scrapped, noting that it created the impression that downtown’s streets had been abandoned. (This impression was no doubt heightened by the fact that it was true.) This only made suburbanites more likely to remain at their teeming malls, leaving downtown to Mad Max and his friends.

When it was first built, the Skywalk was portrayed as an advance for those on foot — a means to “separate trucks and cars from the pedestrian,” as architect Willard Pistler Jr., one of the Skywalk designers, put it in 1970. In fact, it was a capitulation to appease suburbanites.

Demolition of the Skywalk started in 2002, with other sections being dismantled in 2005 and 2007. Among the segments torn out was a bridge that allowed visitors to peer down at dreary, empty Fountain Square. With the Skywalk gone, the square is today one of the most vibrant areas of downtown Cincinnati, which belatedly realized that it had to capitalize on its historic architecture and urban grid, and not try to imitate its glitzy suburban competitors.

We tend to revere those with a vision, those who see a clear and golden future beyond the drab, grey mists of the present. I’d argue that we should preserve some skywalks to remind future generations that those with vision are often utterly and tragically wrong.

And let’s keep those public staircases while we’re at it. Not only as grand memorials to the good works that arise when local government follows a path where ordinary people tread. But as an actually useful way to get from one place to the next, on foot, through neighborhoods, among people. • 17 June 2013