At the 2013 Walking Summit early this month in Washington, DC, I spent a lot of time looking at other people’s shoes.

My interest in footwear-as-fashion borders on nil, but I was curious about locomotion. I saw a lot of sensible, flat-heeled shoes on women, and some efficient Tevas and Hi-Techs on men. But also quite a few painful and pointy dress shoes on both sexes, all inappropriate for walking more than to the nearest Starbucks. I tried not to judge, but, well, what can I say? 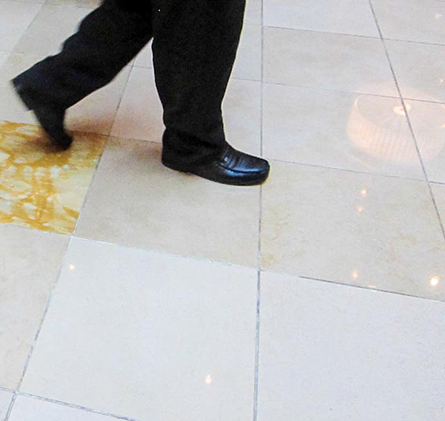 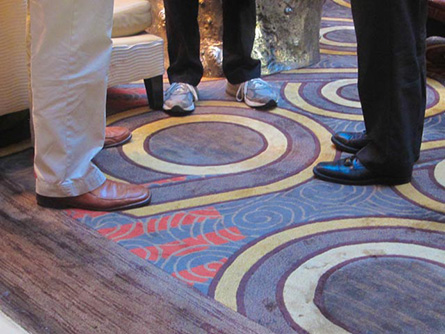 I spent two days at the summit listening, learning, and chatting with advocates for walking. It brought together a diverse crowd of nearly 400 people: urban planners, doctors, transit advocates, public health professionals, recreational trail directors, and people who blog and write about getting around. They talked about how much we walk, why we don’t do more of it, where we walk, how to get people walking more.

As at conferences everywhere, these discussions were decked out with splashy statistics. Many came from a newly released survey about American attitudes toward walking, which had been commissioned by health care provider Kaiser Permanente (the muscle behind the summit). Seventy-nine percent of Americans, for instance, agree that they “should probably walk more.” And 66 percent believe that distracted drivers were a problem in their neighborhoods.

But one statistic really caught my attention: 72 percent of respondents think walking “is cool.”

Seriously? I suspect a finger on the scale. Because walking has long been the antithesis of cool. Walking is what the elderly do in malls. Walking is what the poor do because they can’t afford righteous wheels, or even bus fare. Walking is what a baseball player does, with a limp, when he’s hit by a ball — it’s the opposite of a home run. And race walkers? They may have set back walking by several generations with their alarmingly wobbly, hip-gimballing walk. The Facebook page “Walking is Cool?” It has a total of seven “likes.”

Walking as a cool activity is hobbled by a number of obstructions. For instance, those who crusade for walking often scare the common people with exclamation points. “Fun you say? Yes, fun!” enthuses a web site advocating walking, posted under a heading reading “Why Not Walk?!” Many walking advocates appear to use keyboards lacking the basic period. You could lose an eye on all their punctuation. True believers scare people.

This is compounded by a persistent belief — at least among many I’ve spoken with — that walking is quite possibly the most boring activity anyone can engage in. Washing dishes by hand is preferable. It’s no coincidence that a synonym for “boring” is “pedestrian.” One young woman — who has evidently been so traumatized by exclamation points that she can no longer employ any punctuation whatsoever — recently groused on an online forum: “I try and try but I can’t stand it its too boring I tried listening to songs on my iPod and even walking with a friend but its no use I just don’t like walking… but the thing is I want to walk but can’t.”

In my experience, many others share her view that walking may be good, but leads to a slow death by boredom. The only cure? Take two automobiles and call me in the morning.

Running isn’t saddled with this baggage. This is part because when you run briskly down a city street, all rustly in your nylon, it conveys that you’re a can-do person with a busy life, although not too busy to take care of The Big Dog. In contrast, when someone walks past, they’re invisible, or if they’re walking a bit faster than normal, one may note them only to assume they’ve missed their bus. Also running has cool accessories that convey social status and tech savviness. Last summer, for instance, Adidas introduced Springblade, “the first running shoe with individually tuned blades engineered to help propel runners forward with one of the most effective energy returns in the industry.” I assume they couldn’t call it “Bladerunner” because of trademark issues, which is too bad. I don’t even run and I want a pair.

Same with biking — cool and expensive equipment is abundant, including jerseys in colors garish enough to be seen from the orbiting space station. Of course, the dork-helmet remains one of our generation’s unresolved problems, but great minds are at work on this.

How to overcome walking’s dull reputation?

One intriguing approach mentioned several times at the summit was the “walking prescription.” It’s one thing for your doctor to tell you that you really should be more active and get out and walk more, blah, blah, blah. It’s another if he or she hands you a prescription, which tells you to go to your local pharmacy and pick up an inexpensive pedometer, and then use that to track 5,000 or 8,000 or whatever steps per day they prescribe. (In a more sophisticated set-up, the daily data is uploaded online and your doctor can call you out if you’re not taking your meds.)

Dr. Robert Zarr, from northern Virginia, spoke about a study currently underway in a D.C. suburb to see how well this actually works. The study started in July, and as of early October some 341 walking prescriptions had been issued to patients — complete with information on specific parks in which to walk. Follow-up studies to gauge effectiveness are just getting underway, and we might know more about how it’s working next year.

Prescribing walking is fraught with problems, however. For one, walking advocates don’t have the marketing budgets to invite doctors to “educational dinners” at upscale restaurants or continuing education seminars at golf resorts to tout the benefits of their drug. So getting the word out will require some patience and persistence (and those study results).

On the other hand, if walking is effectively recast as a drug, curious teenagers will undoubtedly start experimenting, sneaking walks when they should be watching TV.

One of the other statistics frequently cited was that a younger generation — the Millennials — are happily abandoning the automobile. Research by the Federal Highway Administration has found that drivers under the age of 30 accounted for just 14 percent of the total vehicle miles driven in 2009 — down from 21 percent, a drop of a third, since 1995. Instead, they’re biking, walking, or taking transit. And the vast majority of them  — 77 percent — report that they plan to live in an urban core, which renders driving far less necessary. That’s evidence of a respectable realignment under way.

So maybe walking is edging toward coolness. How to make walking even cooler? I’d argue for a full rebranding. First question to ponder: What would Stephen Jobs do?

Well, first off, he’d walk. As Walter Isaacson noted his his biography, “taking a long walk was his preferred way to have a serious conversation” and when he could think things through. Mark Zuckerberg, too, is said to be a fan of the long walk. Of course, there’s an irony here — these two did more than anyone else to create the virtual worlds that keep us imprisoned in front of screens. I’ve also read that Bill Gates is a practitioner of the long walk, but let’s stay focused here on being cool.

Is Tchaikovsky cool? I don’t know. I guess that depends on the crowd you run with. But he also took long walks after lunch every day. “Somewhere at sometime he had discovered that a man needs a two-hour walk for his health,” his brother recounted, “and his observance of this rule was pedantic and superstitious, as though if he returned five minutes early he would fall ill, and unbelievable misfortunes of some sort would ensue.” Beethoven, Mahler, and Wittgenstein were also long walkers. Celebrity endorsements work.

Naturally, every rebranding effort ultimately needs to come up with a new term for an old action. “Walking” sounds a bit plodding — I mean, it’s from the Old English.

I’m thinking: “Craft Transit.” Let’s run ads for it — it’s about community, it’s about green. Most of all, it’s about the individual, about breaking chains. Why choose to be a sheep in a PT Cruiser’s clothing, corralled within Jersey barriers (Jersey barriers!), when you can blaze your own trail, a true lone wolf of sidewalk and alley? You’ll bypass clumped traffic and have pocket money to spend things far more lasting than a tank of gasoline. Sell special shoes for it, and put up billboards showing “craft commuters” crossing the Brooklyn Bridge on its very cool pedestrian deck. (I’m reliably told that anytime you can work both “craft” and “Brooklyn” into a campaign, you’ve got a slam dunk.)

We should further ingrain craft transit in the emergent digital sharing economy. This is already underway with the high-tech Fitbits on wrists, which can broadcast your every step, so you can compare with friends how you’re doing. (More steps you take, the cooler you are.) Fifteen thousand steps will soon be the new BMW 3 Series.

Next: pitch walking in the real world as being exactly like exploring with Google maps, but an even better high-def, 3D experience. Walking is even more life-like than the most tricked out virtual reality simulator. (Note lack of exclamation point.) All the cool kids are doing it.You heard it here first: Craft transit. It’s the next new thing. • 11 November 2013