If my life is indeed a picnic, like the cliche says, I’d argue that it’s specifically a late-1800s picnic – stressful, frequently overpacked, and requiring me to wake up a lot earlier than I’d like.

At least, that’s how these “relaxing” Victorian outings often were for the women stuck with food preparation. 1883’s Practical Housekeeping demands that, when picnicking, women “be up ‘at five o’clock in the morning’ to have the chicken, biscuits, etc., freshly baked.” Mrs. Owens’ Complete Cookbook and New Household Manual, meanwhile, lists several types of foods that should be brought, from baked beans to canned deviled ham – and she also notes that “Bouillon tablets are just the thing, provided there is hot water.” Because one thing that is totally not a pain in the butt to eat at a picnic is soup broth. And oh, we haven’t even gotten to the other picnic accoutrements women needed to pack yet. 1882’s The Successful Housekeeper says, “Forget not the napkins, forks, spoons, and luncheon-cloth. Also carry tumblers, plates, salt, pepper, sugar, and a bottle of cream or a can of condensed milk. Cups with handles, but no saucers, are desirable for tea and coffee.” And here I was about to say that that was a ridiculous amount of stuff to pack, but thank goodness – picnickers can leave their saucers at home.*

Thankfully, though, even in this era of Victorian stuffiness, there were some who believed in simple picnics. And they had one shining edible hope to make everything better: the sandwich. 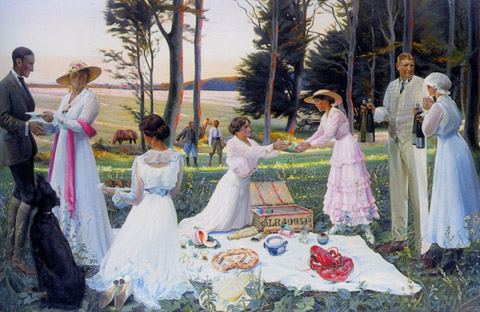 Seriously. If the late-1800s picnic was a society that has lost its way, the sandwich would have been its messiah – a saving grace that was easy to prepare and easy to pack, with an endless variety of fillings. I’ve read pages and pages from the era written on sandwiches – their portability, their sturdiness, and their contributions to good health and upstanding citizenry. Hell, sandwiches were even patriotic. An article on sandwiches from an 1887 edition of Good Housekeeping** notes:

The true sandwich is ever the most popular thing at picnics, since whetted by fresh air and unusual exercise, the average appetite calls for something more substantial than the usual picnic assortment of cake. If sufficient food of the right sort was provided, less evil would follow in the train of picnics, and doctors would find such gatherings less profitable, even with all the picnic results inevitably attending the customary celebration of the glorious Fourth.

Even the time period’s extreme healthy-eating champs, the Kelloggs, promoted a good picnic sandwich. In Science in the Kitchen: A Scientific Treatise on Food Substances and Their Dietetic Properties, Mrs. E.E. Kellogg suggested that both egg sandwiches and fresh fruit sandwiches served with whipped cream “are most relishable,” at least as long as they’re served on whole wheat or graham bread, and presumably chewed with an air of superiority. 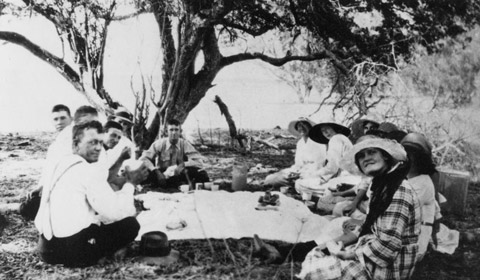 Kellogg recommendations aside, there are a few things you could expect from most late-1800s picnic sandwiches. They were served on sliced bread or biscuits, not on baguettes or any other fancy loaves. Egg salad was a popular filling, as were sardines or lobster (remember, lobster during this time period didn’t have the same rarified quality as today), nut meats, and edible flowers like nasturtiums. The sandwiches were usually smeared with a thick layer of fat, such as butter or mayo. If meat was used on the inside, it was in loaf form or chopped fine and mixed with a bit of fat and spices. In fact, some authors were adamantly opposed to meat that was not chopped in this fashion – take this passage from The Successful Housekeeper, berating sandwiches with large slices of meat:

The best and most convenient of all out-of-door edibles, is the sandwich. Not the one with slips of meat laid between slices of buttered bread, so that when a bite of bread is taken, all of the enclosed meat is dragged out, unless a serious contest takes place in its behalf between the teeth and fingers, which, to confess the truth, is not an attractive conflict, as every one will attest who ever saw a party of railway-travellers, each at war with one of them, as the train moved out from a way-station where the conductor had cried out “five minutes for refreshments!” 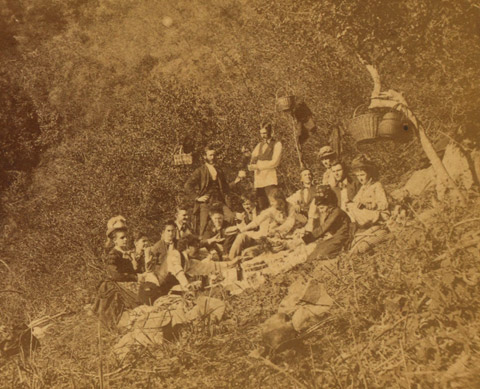 Bad train sandwiches aside, I think the Victorian folks who promoted sandwiches had the right ideas about what makes good picnic food – items that are simple but indulgent and that travel easily (especially wrapped up in wax paper or parchment and tucked in a picnic basket). Because while I hate to agree with a book conceived to teach young people how to be dutiful factory workers, there’s a lot of truth in this statement from 1912’s Hygiene for the Worker:

It is a common fault of Americans that they take their play strenuously. Vacation often provides so much opportunity for exercise and entertainment that many overdo and draw still further upon a vitality weakened by the long winter work… We should never need to recuperate after a holiday for vacation.

Basically: This summer, enjoy your picnic sandwiches, and make sure to bring some cake and lemonade too. But please, leave the broth at home.

One of the suggested picnic foods recommend in multiple cookbooks is veal loaf – warm or cold, in a sandwich or on its own. Personally, I like it on a sandwich, with a generous spread of dijon mustard.
If you eat meat but have concerns about veal, you have a couple of options. One is that some farmers have begun offering “ethical veal” from young animals that are not caged and often are fed organically. If you can’t find a source in your area, you could also make this with fatty ground beef.

A few notes from where this recipe wasn’t clear: I used ground veal, not veal that was “chopped fine.” For the crackers, I crushed up saltines. When it says “moderate” oven, I did 375°F.

Many of the dessert “cakes” brought to picnics were not cakes as we tend to think of them – the multi-layered, frosted affairs we make for birthdays and the like. Loaf cakes and buns were more common for picnicking. The currants in this recipe were good – I added them just before the egg whites – but I think the buns would be just as good if you used raisins or left the fruit out entirely. I baked them at 350°F.

Cream the butter and sugar; add the egg yolks. Mix and sift the flour, baking powder, cinnamon, and cloves; add these and the milk to the first mixture. Beat one minute. Add the vanilla and the stiffly beaten egg whites. Bake in well buttered muffin pans twenty minutes in a moderate oven.

A Thousand Ways to Please a Husband With Bettina’s Best Recipes, 1917

Mix the cream and vanilla; add sugar slowly until the consistency to spread. More sugar may be needed. This is a most satisfactory frosting and is easily and quickly made. It is suitable for hot weather.

A Thousand Ways to Please a Husband With Bettina’s Best Recipes, 1917

* Oh, I almost forgot one thing – ladies, you’re probably going to look pretty sweaty and ugly after getting all of this together and spending time outdoors, so pay heed to the 1895 edition of Home Science Magazine that recommends you bring a towel, brush, comb, and beauty bag, because “no self respecting woman wishes to return to the city or her home dirty and ‘frowzy.’” If Home Science Magazine still existed today, I suspect they’d recommend putting lipstick on in the last mile of running a marathon, so it’s nice and fresh when you cross the finish line.
** The same Good Housekeeping article also has what we would unfortunately today call a “life hack” for buttering bread:

Having secured a loaf of the right kind of bread, cut off the crust slice on the end, then butter the end of the loaf. This is far easier than it is to butter a cut slice, for thin slices are often torn in pieces while attempting to butter them, but by putting the butter on the end of the loaf, very thin slices can be cut without any trouble. By all means, let the butter stand for a time in a warm place that it may be spread evenly, for nothing is more disagreeable than to find here and there a lump of butter and the rest of the bread bare. • 14 June 2014