Punk was about fashion from the beginning. The story goes like this. A British man named Malcolm McLaren was interested in music, fashion, and art. He met a girl named Vivienne Westwood at art school. They opened up a clothing shop in London. One day, members of a band called The New York Dolls walked into the store. McLaren was fascinated by the look and style of the band. The Dolls played angry and aggressive songs, but they did so in tights and high heels. McLaren followed The Dolls to New York. In New York City, McLaren bumped into a man named Richard Hell: poet, singer, scumbag. McLaren loved something about Hell. “Here was a guy,” McLaren said, “all deconstructed, torn down, looking like he’d just crawled out of a drain hole, covered in slime, looking like he hadn’t slept or washed in years, and looking like he didn’t really give a fuck about you!” McLaren went back to England. He wanted to build his own Richard Hell, further deconstructed, torn down completely, covered in even more slime. McLaren found a broken man with decaying teeth named Johnny Lydon, renamed him Johnny Rotten (the teeth), and surrounded him with a couple of other miscreants who could barely play their instruments. The Sex Pistols was born.

McLaren and Westwood renamed their clothing shop SEX and began to sell ripped clothing, dirty t-shirts and repurposed S&M outfits. You could walk into SEX and buy all the gear that would make you look just like a member of The Sex Pistols. The “look” that McLaren saw in The New York Dolls, in Richard Hell and in Johnny Rotten was central to what became known as “punk.” Punk was a fashion before it became a subculture, a politics, a style of music.

The fashion history of punk can be explored at the new summer blockbuster exhibit hosted by the Metropolitan Museum of Art. The exhibit is called “Punk: Chaos to Couture.” There are two displays in the opening rooms of the exhibit that set the tone for the rest of the show. The first display is a more-or-less exact replica of the CBGB’s bathroom as it looked in 1975. CBGB was the legendary rock club that hosted acts like The New York Dolls and The Ramones. Patti Smith once said that punk began in the CBGB urinal. The bathroom is unpainted sheetrock, dirty urinals, graffiti, and a message spray painted over the broken sinks which says, “DEAD BOYS RULE.” The bathroom has the look and feel that Malcolm McLaren was so excited about when he met Richard Hell.

The second important display at the Met exhibit is a recreation of McLaren and Westwood’s shop at 430 King’s Road in London. The store is much cleaner and well organized than the bathroom at CBGB. But the attitude and the style is the same. Westwood and McLaren were selling now-infamous t-shirts like the one they called “Black Footballer.” The t-shirt features a full-length photo of a black man completely naked holding a football. Another shirt proclaims, “Cambridge Rapist.” The shop also sold S&M pants and clothes with too many zippers.

The rest of the display rooms at the Met exhibit document punk’s move from the “low” fashion of McLaren and Westwood’s store to the high fashion of the runway. There are Versace dresses with belts, buckles and zippers. There is torn fabric and the plastic bags you can wear from designers like Rei Kawakubo (founder of Comme des Garçons), Karl Lagerfeld (Chanel), Riccardo Tisci (Givenchy), and a number of other big names in the fashion industry.

It is the high-fashion aspect of the Met’s exhibit (curated by Andrew Bolton, who heads the Costume Institute at The Met) that has drawn early criticism. Even if punk began as a fashion, the criticism goes, it was fashion with a purpose. The purpose was to shake things up, to make life uncomfortable for the status quo. Punk can’t be reduced to a fashion statement or an inspiration for expensive sweaters and dresses from the ritziest fashion houses, can it? What about that t-shirt supposedly worn by Richard Hell? It was a white t-shirt with the words “please kill me” scrawled across the front. Doesn’t that t-shirt cross a line? Walking around New York City in the 1970s with that shirt on was an invitation to real danger. That dangerous side of punk was an honest confrontation with meaninglessness, nihilism, despair. Sid Vicious may have been a punk kid who hung around Westwood and McLaren’s store shoplifting and making a nuisance of himself. But he was also the punk kid who shook his fist at the world and drugged himself to an early grave. That is a genuine darkness. It would seem to have nothing to do with Versace or Helmut Lang.

If punk is more than just fashion, it leads us to another question. What is fashion? According to Andrew Bolton and the people who put the show together at the Met, fashion is a form of freedom and self-expression. Punk was therefore important to fashion because it opened up new possibilities. Any kid could rip up some jeans and stick clothespins in a shirt and become the master of his or her destiny. Punk, so this thinking goes, made everyone into a designer and made any attire possible. The current Do-It-Yourself ethos within fashion and the culture at large is a direct result of the freedom given to us by punk. That’s the way Punk: Chaos to Couture sees it.

But fashion is only about freedom and self-expression on the surface. At its core, fashion is a kind of death drive. The number one imperative of fashion is, after all, to produce something new every season. This means killing the style of the last season. This process is relentless—some would say exhausting. The styles that are killed off are inevitably recycled down the line, only to be killed again in a cyclical process that never ends.

A never-ending cycle of newness the only purpose of which is to feed the market for newness. An industry that creates desires only to negate those desires and create new desires the moment the old ones are fulfilled. These are not bad definitions for nihilism. The central tenet of nihilism is, after all, that nothing matters. To be a nihilist is to think that there is no point to anything, no purpose. Nietzsche already suggested in the latter half of the 19th century that nihilism was a central problem for Western civilization. That’s because in the 19th century Western civilization was questioning all its highest values. When there is a crisis of values, thought Nietzsche, the possibility of nihilism creeps in. A society that doesn’t know what it is about begins to entertain the idea that it is about nothing. Nihilism. 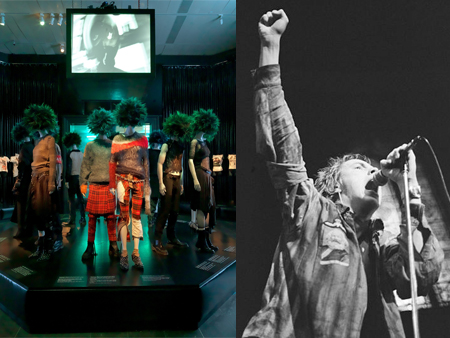 Left: A gallery in the Punk: Chaos to Couture exhibition, courtesy of the Metropolitan Museum of Art. Right: Johnny Rotten

Fashion took off as an industry around the same time that Nietzsche was thinking about nihilism. Fashion works well in a society that is unsure about its highest values because fashion has nothing to do with values. The point of fashion is to produce style. No style is inherently better than any other style. One can’t be better than another, since every style is only good for the moment. There is a democratic spirit to fashion for this reason, and a sense of freedom. But the freedom of fashion has a desperate quality. The newest style in fashion is fresh for the brief period in which it is new. Then it must be discarded.

The excitement of fashion is the constant excitement of novelty. But the flip side of this excitement is exhaustion, boredom. When Malcolm McLaren discovered Richard Hell in New York City in the 1970s, he loved Hell’s broken down and carefree look. One of the words McLaren used to describe Hell was “bored.” McLaren said, “He was this wonderful, bored, drained, scarred, dirty guy with a torn and ripped t-shirt.” You see that look on the faces of many classic punk rockers. They were dirty and bored. In many ways, the boredom was more unsettling than the anger. Sid Vicious could look scary when he put on a scowl and flipped you the bird. But he looked truly terrifying when he stared blankly into the camera lens, caring not at all whether he — or you — lived or died.

The bored, blank stare of the punk rocker can be seen most clearly in one other place of popular culture: the catwalk. The empty stare of a fashion model on the runway is the same empty stare of the punk. The endless repetition of fashion is inherently boring. Repetition is the very essence of boring. So, to be fashionable is to be in cahoots with the boredom. To be fashionable is to be cool and to be cool is to “get it.” Getting it is showing that you know something about style. You participate with an air of detachment because you realize that the next style is just the next style. To believe that the next new style will be final, that it should be met with any more or less enthusiasm than the last style would be to miss the point of fashion. Participating in the cycle of fashion requires and produces boredom.

To take that boredom seriously is to approach the dark heart of fashion. When you contemplate the fact that the cycle of newness truly has no purpose you face very bleak thoughts. Death is there. A death instinct.

That death instinct is what punk exposed. Punks got to the heart of their boredom and saw the futility. They were looking into the face of death. That is why punk managed to have an impact beyond the silly antics and poses of its practitioners. Punk was important not because it was more than a fashion, but because it was the soul of fashion. In exploring the dark side of fashion it explored the dark side of modern life, an eternal emptiness that surrounds us and presses upon us from every side. Usually we don’t have the strength to take a good look at our empty, death-driven culture. For a short time in the 1970s, punk rockers did just that. Then they died. Literally or figuratively. From the very beginning, punks claimed “Punk Is Dead.” This is often taken as a claim about what happened to punk. Punk was alive and then it died, it got co-opted, it lost its verve. But the statement “Punk Is Dead” is a statement about what punk is and has always been. Punk is dead. Punk is death. Punk is the death at the heart of contemporary life. And it is still extremely fashionable. • 22 May 2013