When it opened in the spring of 1881, critics described London’s Natural History Museum as a “true Temple of Nature,” exhibiting the “beauty of Holiness.” Such terms refer to the museum’s architectural character as much as its collection. Its central hall rises with cathedral-like force, with its Romanesque arches covered in terracotta tile reflecting a yellowish light that emanates from rounded, stained glass windows. Standing there today, amidst stuffed bears and dinosaur bones arranged to inspire awe and fear, the space still feels more religious than scientific.

The museum also conjures an idea of nature that is firmly rooted in 19th century notions of its spiritual force. When the museum was built, London’s skies were often sooty gray, the city’s buildings covered in a patina of grime of industrial expansion. The holy light of the museum illuminates an idea of nature as a spectacle to behold, displayed in all manner of flora and fauna, of fossils and taxidermy, gathered from the far reaches of the imperial empire and posed under glass. It also offered another story of England’s revolution: one of solace and wonderment, of God’s hand in the world, and, most acutely, of nature’s role as a spectacle of pleasure and inquiry for modern man. At heart of the museum’s origins is this curious paradox: preserving an idea of nature’s history just as nature was increasingly being ingested in the maw of industrialization.

It is fitting then that Sebastião Salgado chose this museum to premier his most recent photographic series “Genesis,” a display of over 200 large and captivating black and white photographs that are meant to celebrate the unspoiled margins of our planet. It is, like its subject matter, a show of global exposure, exhibiting at a number of museums in Europe and North America this year, often simultaneously. It took over eight years for Salgado to complete this project, traveling to 32 countries from Sub-Saharan Africa to the Amazonian rain forest to the coast of the Antarctic. Like his other projects, “Workers” and “Migrations,” we encounter here vistas that are equally grand, caught somewhere between a Hollywood stage set and a 19th century landscape painting. But unlike those earlier series with their investigations into the human plight of globalization, this is a celebration of nature’s purity and of its beauty. But like the museum, the photographs hold a distinctive paradox between destruction and preservation.

The biblical reference in the title is intentional, mixing both origin story and spiritual splendor, all wrapped into grand claims about human experience. As Lélia Salgado, the photographer’s wife and consummate curator of his work, describes in the introduction to the show, this series is a “quest for a world as it was, as it was evolving, as it was forming, as it existed for millennia before modern life accelerated and began distancing us from the very essence of our beginnings.” She adds, the images offer us “nature in all of its unspoiled grandeur.” It is such language, such motives, that lead many to describe this series as with the simple word “epic.” A better word is romantic. Or still better mythic, for as much as these photographs try to preserve a sense of the planet’s untainted origins, they so often deny history itself. As I wandered the galleries of these deeply striking and beautiful images, I wondered about the word genesis. What histories get destroyed when we view these images as somehow reflecting a time before history? 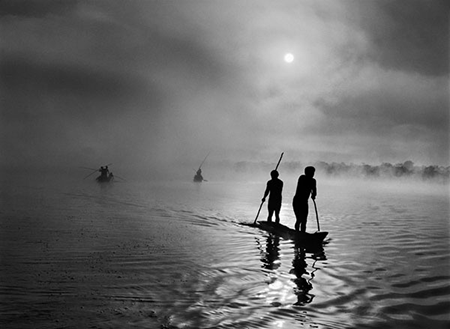 In the Upper Xingu region of Brazil’s Mato Grosso state, a group of waura fish in the Piulaga Lake near their village. The Upper Xingu Basin is home to an ethnically diverse population. Brazil, 2005.

Organized into five galleries that are roughly geographic in focus, the photographs capture moments seemingly of surprise and staged encounters. An areal view of the Nenet tribe herding reindeer in the Siberian Arctic presents lines of animals moving across the blank white snow, a pattern that is easily abstracted into a pleasing pattern as you take a few steps back from the photograph. Patterns dominate these images, whether on a grand scale or an intimate one. The single claw of a Marine Iguana from Ecuador (or, as the wall text informs us, its scientific name: ambylrhynchus cristatus) offers a contemplation on minutia of it’s scales, the lighting making each one look more artificial than natural, more steel than animal. But captivating still the same. We encounter a family of African elephants (Loxodonta Africana), gathered in the distance. The camera sits at ground level, framing the group off in the distance in near geometrical balance, the larger animals in the back, the smaller one in front, all staring off to the left as if choreographed. There are patterns in the mountain ranges, caught between clouds, and a number of images of penguins massed along the coast, their black and white bodies nearly hypnotic in their repetition. Around another corner you encounter a more quite image of a giant tortoise (geochelone elephantopus) caught in the noonday sun, his hard shell balanced with the bending trees in the distance, its face staring back at us as if contemplating Salgado’s camera.

As I wander from “Africa” to “Northern Spaces” the images increasingly feel familiar, as if I have seen them before. And that is the point. Salgado’s eye is not particularly unique. It is an eye that composes nature in familiar ways, mirroring images found in National Geographic magazine, or in the 19th century landscapes of Carleton Watkins or Eadweard Muybridge. These are images that look like our idea of nature, familiar in their bland and white beauty and grandeur. It is also an eye that is deeply 20th century, looking for patterns and designs that reflect our visual, commercial culture. These are backdrops to advertisements, glossy images you might find in magazines. The commercial value of these images does not escape Salgado. The catalog for “Genesis,” a hefty 520-page portfolio published by Taschen, sells for $67.00. Part of the show features a limited edition catalog, encased in glass, which can be purchased for $4,000 (the two volume set comes in a specially designed wooden box “to preserve and protect them”). Online, there are other options, such as the two-volume catalog combined with an original print (the Marine Iguana’s scaled claw for example) for a mere $10,000. These images sell well. And this is the paradox of the “Genesis” myth: The photographs depend on their commercial appeal as much as they are meant to question our Western commodity culture. Consume me they say. But also, preserve me.

It is this emphasis on the aesthetic beauty of Salgado’s photographs that have for many years provoked celebration and criticism of his work. Salgado, the Brazilian economist turned documentary photographer, has won almost every photography prize there is. His images are more than photojournalism, but rather they sit in the tradition of Henri Cartier-Bresson and the Magnum group he founded, whose photographers not only document but also create a compelling lyricism from the lived realities in front of their camera. Whether an expansive view of miners climbing down the side of a muddy hill, their bodies abstracted into patterns in the landscape in his “Workers” series, or a more close up view of a refugee camp in Tanzania, the people and objects haloed in a early morning mist in “Migrations,” Salgado has become known for turning human plight into hauntingly beautiful images, making the aesthetic its own political force. In responding to his “Workers” series several years ago, Igrid Sischy, offered a cogent and inaugural critique of Salgado’s work in an essay in the New Yorker, where she questioned his lyrical documentary approach. “To aestheticize tragedy,” Sischy wrote, “is the fastest way to anesthetize the feelings of those who are witnessing it. Beauty is a call to admiration, not action.”

Unlike those earlier series, “Genesis” avoids such critiques of turning tragedies into beautiful images for gallery walls. Instead, beauty is the whole point of this series, a compelling and spiritual engagement with nature. But here too such beauty may just conjure our admiration than our concern.

Beyond their beauty, however, these images present a vision of nature caught in the past, beyond history itself. If the earlier series turned human plight into aestheticized spectacles, these photographs rest on a mythic vision that uses the black and white medium to construct images of an untainted present. “I feel ‘Genesis’ also speaks urgently to our own age,” Salgado recently said in an interview, “by portraying the breathtaking beauty of a lost world that somehow survives. It proclaims: this is what is in peril, this is what we must save.”

But what do we make of this call for preserving when we encounter the many images of native peoples? For example, in the “Africa” section, after pondering the beauty of elephants, you encounter a series of portraits of Ethiopian woman adorned in traditional lip plates, their lower lip expanded in a perfect circle that centers the portrait. They stare blankly at Salgado’s camera. The wall text informs us that the “Mursi and Suma women are the last women in the world to wear lip plates.” Are we to imagine that these women need our protection, like the iguanas and sea lions? What do these women think? What exactly are we to preserve here?

Consider the girl from the Upper Xingu region of Brazil, who Salgado captures just before entering into a ritualistic tattooing ceremony where ash is rubbed into cuts on the skin to create delicate scars. Her body is more the subject of the photograph than the ceremony itself, prompting us to wonder if it is her body or the ritual that matters here? Or consider a portrait of an aging Nenet from Siberia, alone in a tent, dressed in a seal coat, looking quite tired as he stares up at Salgado’s camera. The text tells us this is a portrait of a Nenet in his tent. But who is this Nenet? What is his name? What is his history or the history of the Nenets? The photograph can’t give us these facts. Or rather Salgado’s photographs don’t give us these facts. And this is the problem. The suggestion throughout this show is that these native peoples have somehow thrived outside of industrialization, and the entire history of colonialism and war, of famine and disease over the centuries have somehow floated by them. This is history turned into a myth about the worlds and peoples beyond the West.

This paradox is what struck me as I went further and further into this show, wishing that Salgado had simply stopped at the lyrical moments of landscapes and animals. These images seem to fit well in this “Temple of Nature.” Instead, it is the portraits that turn “Genesis” from a call for awareness about our planet’s natural beauty, to a Western gaze still anchored to a notion of natives as primal, who need our saving. The generalized names of tribal categorization go hand in hand with the scientific specifics of the animals: Each conjures a history of how we in the West have for centuries defined the flora and fauna, the animals and the tribes beyond our borders. Such vision gave rise to this Romanesque museum, and those ideas thread through this series. I don’t want to deny Salgado’s earnestness here, or his belief in how these photographs can compel us to action. But such motives may only confirm a familiar story we tell ourselves about nature. These mythic images offer a comfortable redemption about what we have wrought, erasing a history we know lurks just beyond the photograph’s frame. • 20 May 2013