The Schwenkfelder Library and Heritage Center is near the train tracks that cut through Pennsburg, Pennsylvania. Nearly every town in southeastern Pennsylvania is organized like Pennsburg: A few houses lining a short empty street that was once a thoroughfare for trains that stopped moving a long time ago. The trains once served the mills and the factories, but those have stopped moving too. The street in these towns might have a restaurant or a gas station for the commuters who live in the housing developments that now ring a fortress around the railroad tracks. The architecture of southeastern Pennsylvania might be called development by erasure; the more that is built, the less of southeastern Pennsylvania there seems to be. The farms erased the wigwams and the railroads erased the farms, and sometimes it feels like few people really live here. The woman at the laundromat and the man at the post office are just biding time until the next job that will take them to the next suburb, or into Philadelphia, or across the country far away.

No one is quite sure just what a Schwenkfelder is these days, including many of those who call themselves Schwenkfelders. The number of these people is so very small, and gets smaller the more you investigate. It all began with the spiritual awakening of Silesian nobleman Caspar Schwenckfeld von Ossig in 1518 or maybe 1519. (How many American stories begin with a spiritual awakening.) Schwenckfeld had gotten fired up by the teachings of Martin Luther and was inspired to take Luther’s ideas further. The complicated theology of Caspar Schwenckfeld — described in Schwenckfeld’s Concept of the New Man as “a skillful blending of Johannine mysticism and Pauline Anthropology, modified by the sifting process of fifteen hundred years of Christian theology” — boiled down to this: That people could communicate directly with God, that true spirituality didn’t need all the machinery of hierarchies and priests and sacraments, that church was not a place but a community. Schwenckfeld wanted a theological system that would appeal to all Christians — he dreamed of a day when the warring factions of Europe would become brothers and worship as one. Schwenckfeld sent books and letters to Luther with the details of his discoveries, certain that the theologian would be interested. Schwenckfeld called it the “Middle Way.” There are several references to Caspar Schwenckfeld in the private letters of Martin Luther, in which Luther calls Schwenckfeld a simpleton and a maniac, and his Middle Way the “spue” of the devil. How frustrating it must have been for poor Martin Luther to see his proposals taken to such extremes. In time, Luther’s view of Schwenckfeld would be shared by the Silesian authorities. They would label the hard-of-hearing and gentle Schwenckfeld a heretic and eventually force him into a polite, voluntary exile. It is well known that Schwenckfeld prayed for Martin Luther every day, for all the days of his life.

Schwenckfeld never codified his theology into doctrine, and never tried to organize his followers into a church. By the time he died in 1561, Schwenckfeld had gathered about him a small group of devotees who met secretly in each other’s homes. They carried with them the brand of heretic, and for the next hundred and fifty years faced nearly constant persecution. They were imprisoned, fined, forced into periodic exile, sent to Vienna as galley slaves, or pressed into military service against the Turks. Women were put in the stocks and had their children taken away to be raised as Catholics. In 1734 the majority of remaining Schwenkfelder descendants, about 200, got on a boat to America, and settled in the outlands of Philadelphia among the Anabaptists and other outcasts from Europe. The Schwenkfelders built no churches and spread themselves around the southeastern Pennsylvania countryside, worshipping casually as they had in Europe. By 1775, there were no more Schwenkfelders left in Silesia. The only remaining Schwenkfelders were American. 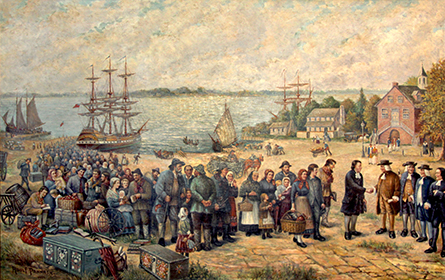 I was told by the resident archivist of the Schwenkfelder Library and Heritage Center, Hunt Schenkel, that the Schwenkfelders were great savers of words. His disciples have been loathe to throw even a single letter away, and have created a magnificent, halogen-lit room of bound leather and parchment and maps and logbooks and land deeds and letters and a nineteen-volume collection of Caspar Schwenckfeld’s writings they call the Corpus Schwenckfeldianorum. There is, in a grey archival box, the Bible that once belonging to Schwenckfeld himself, improved with Schwenckfeld’s hand-scratched errata, and books hand-copied by Schwenkfelders in old German script that were bound in a Schwenkfelder bookbinder. There are many genealogies. Each day of the last fourteen years Mr. Schenkel — not himself a Schwenkfelder — goes to the room of words and tries to organize them, never feeling quite on top of his work. He is the preserver of a people that should have disappeared long ago, holding a living fossil in his pocket.

The word “heritage” is somewhat paradoxical. It means “to take something on.” But the root of the word, *ghe-, means something like “to be empty,” or “left behind”. It is a word that captures the paradox of the Schwenkfelders’ survival, a survival that seems to depend upon living in a state of perpetual disappearance. Caspar Schwenckfeld produced many words, but he held onto them lightly and communicated them in a whisper. This is to say that Schwenkfelders are rooted in air. Their story has developed a bit like southeastern Pennsylvania, an erasure by collection. The more Schwenkfelder history that is saved the less Schwenkfelder there seems to be.

Within the official histories of the world are smaller, hidden histories. You can only glimpse them driving on the flipside of the railroad tracks, unless you happen to grow up as, for instance, a Schwenkfelder, in which case you are born into the secret story of disappearance and the flipside is your home. • 16 May 2014