As I was sitting seiza, kneeling on thin tatami mats with my legs folded tightly underneath my thighs, my feet began to go numb. Our host had yet to even enter the room, still outside of it preparing the utensils on her tray. I had only been seated in the position for a few minutes and was already concerned about the lack of blood flow to my ankles. I worried I wouldn’t make it through my first Japanese tea ceremony, let alone any of my future lessons.

One of my instructors, Drew, was busy explaining the hanging scroll in the cove in the corner of the tea room — too busy to notice my very visible physical discomfort. On this snowy morning, the scroll featured Japanese calligraphy and the characters for beautiful, moon, and flower. “It serves as a reminder that beauty can still be found even in the depths of winter,” he said calmly, “and that the snow will eventually melt its way into spring.” I did my best to embrace his message as I felt my body shivering from the cold draft entering the tea room from outside.
Below the hanging scroll rested a narrow vase with a simple flower arrangement, which Drew also pointed out to our small class. “The flowers chosen for each tea ceremony will always represent the current season. I picked these from my garden this morning,” he said proudly. Every other student in the room listened carefully and attentively while I fidgeted in my spot, struggling to focus on anything besides the lack of sensation in my legs.

This was my first of many Japanese tea ceremony classes, which I attended for four consecutive weeks at the Shofuso Japanese House and Garden in Philadelphia. Early every Saturday morning, I rushed to get ready in my messy studio apartment and make it to my 9 a.m. lesson on time. When I arrived, I shuffled out of my puffy winter jacket, slipped out of my salt-covered boots, and tied a wide sash around my waist before gliding onto the tatami mat flooring in my mismatched socks. 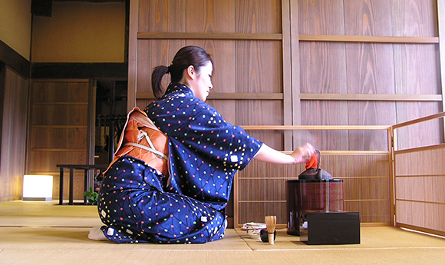 Seiza may look uncomfortable, but it’s the only way to sit in a kimono.

It took a few classes, but eventually I adjusted to sitting seiza for several hours. Or at least, I got better at discretely breaking the position to shift my weight and prolong the arrival of pain. I wasn’t the only beginner in these classes — there were students who were just a few months ahead of me in their studies — but I was clearly the newest addition.

We were an eclectic bunch, my Japanese tea ceremony friends and I. Only two were actually Japanese, and they belonged to the more advanced group of students. Some of the others had experienced a traditional tea ceremony while living or traveling in Japan, and began to study it in depth upon returning home. One was enrolled in an Asian studies program at a nearby university, made his own pottery, and was particularly taken by the tradition. Another student admired all things Japan — her interest in the tea ceremony was an extension of her love for the culture. And me? I was just someone who had visited the Shofuso tea house once before, someone curious enough about tea to sign up for a few harmless lessons.

Ironically, the last thing the Japanese tea ceremony is about is tea. Chado — or, the way of tea — entails more than making tea and drinking it. It embodies harmony, respect, purity, and tranquility. It is about admiring aesthetics and finding beauty in the everyday, especially in arts, crafts, flowers, and handcrafted pottery. It’s about sharing the beauty of these objects with guests. If you’re the host, it is about preparing a bowl of tea from one’s heart. It is not about brewing the perfect cup of green tea, as I quickly learned. 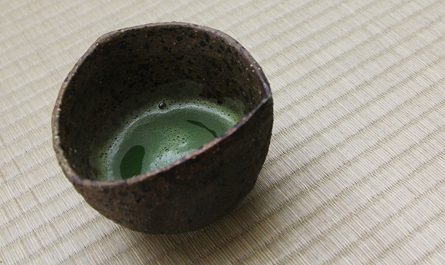 The whole ritual, which dates back to the 15th century, is meant to keep you focused only on your senses, to be in the moment and not distracted by other thoughts. Yes, you could say the Japanese tea ceremony projects very Zen beliefs. Occasionally, as a guest, I took these beliefs to heart. As I waited for the host to make me a hot bowl of matcha green tea, I felt relaxed. I forgot about the bitter cold that awaited me when the ceremony was over, the sink full of dirty dishes I would return home to, and the taxes I still needed to file.

But I often felt anxious in the tea room. I worried that my classmates would judge me when I couldn’t recite the Japanese phrases correctly or laugh at my inability to remember how to properly fold my fsuka (a silk wiping cloth). I feared I would make an ungraceful bow, or even worse, make the wrong bow at an inappropriate time.

The traditional Japanese tea ceremony is elaborate, meticulous, and contemplative. It requires so many detailed steps that being a guest at one is hardly a cup of tea. I’ve been a guest at numerous tea ceremonies, yet still need to refer to my notes when trying to recount the details of the entire ritual.

When the host first enters the room, they must ask their instructor for permission to make tea. If allowed (which they always are during practice tea ceremonies), the host brings back a tray of sweets for the guests before leaving again to prepare. The host returns with a full, round wooden tray, greets the guests with a silent bow, and makes his or her way to the corner of the room where the tea kettle sits atop a fire.

Unlike most things in American culture, the Japanese tea ceremony is devoid of all rush. At first, this struck me as odd. I’m used to eating and drinking in crowded restaurants and busy cafés. It took a while to adjust to the way of tea, where there is no hurry to finish as quickly as possible and no need to serve everyone at once. The host prepares a separate bowl of tea for every guest, cleaning the bowl and tea utensils between each serving.

To initiate the ceremony, the host starts by wiping off the natsume (container that holds the matcha) with their fsuka, then cleaning the chawan (tea bowl) and chashaku (tea spoon) with their chakin (a small, white cloth). The last step is cleaning the chasen (tea whisk) in hot water, which they discard into the kensui (the waste bowl). Only when the chawan and utensils have been cleaned can the actual tea making begin. 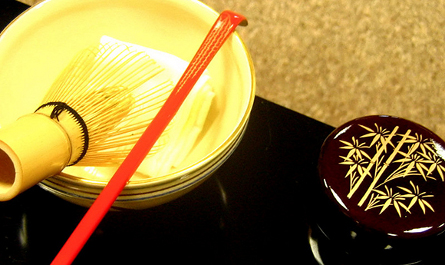 On the left, a chasen and chakin rest inside a chawan, with a chashaku laid on top. To the right, a natsume rests on a tray.

But before the host makes a bowl of tea for the first guest, they must invite them to please enjoy a few sweets. At my first tea ceremony my classmate, Katie, was seated in the prime spot. When she was asked to pick a few sweets, she first bowed in my direction and softly spoke a phrase I didn’t understand. I was unsure whether or not I was expected to bow with her, and instead of making any move, I stared blankly back at her.

“I just apologized in Japanese for going before you. You’re always saying you’re sorry for something during tea ceremony,” said Katie with a smirk. She picked a chewy sesame treat from the tray before placing it in front of me. “Go ahead.”

So I followed Katie’s lead and took a few sugary treats from the tray, placing them on my kaishi (a packet of papers), which served as both a plate and a napkin. I savored each bite as I anxiously waited my turn for tea.

As the weeks went by, I grew more comfortable being a guest of the Japanese tea ceremony. To distract my mind away from my tingling toes, I carefully watched each and every movement the host made. I admired how gracefully some of them poured water from the kettle, and was secretly satisfied when I heard their mistakes being corrected. “No, don’t use your left hand,” said Morgan, our other tea instructor, “and try to use your wrist more when whisking.” 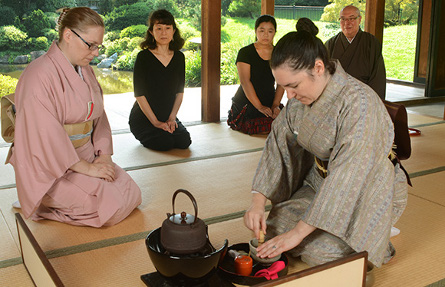 An instructor watches her student prepare a chawan of matcha for guests during a ceremony.

I wasn’t always the greatest guest. I often forgot which step to take next, and unknowingly omitted certain ones entirely. When the bowl was ready and before me on the tatami mat, I was supposed to bow to the host, then gently pick it up with my right hand and place it onto the palm of my left. Before drinking, I would turn the bowl clockwise, 10-to-2, before lifting it to my lips to drink. On most mornings, it was the first beverage I had drank all day and I welcomed each warming sip of frothy, bitter green tea. You’re supposed to finish your tea in no more than four sips, and, my favorite part — must remember to make a loud slurp on your last, which tells the host you greatly enjoyed your tea. Then you wipe the part that touched your lips with your right hand, and turn in counterclockwise back to its original position.

After you’ve finished drinking the tea inside the bowl, you’re supposed to take the time to look at it. You gently place it on the ground in front of you. With your elbows resting on your knees, you then lift it up, slowly rotating it around for a closer look. This is where you admire the craftsmanship, the pattern and glaze, or look for the artist’s signature on the bottom.

It’s a privilege to be asked to make tea for the class by the tea master. For weeks, I sat through dozens of practice tea ceremonies, impatiently waiting for my turn to try my hand at making tea. But even after an entire month of lessons, I wasn’t remotely close to being ready to host a ceremony. In fact, it took until my very last class to even practice whisking matcha powder into tea. When I finally did get the chance, I was instructed to pass my practice tea to my instructor. Morgan took three sips of my tea before making a loud slurp on the fourth. “It’s good matcha. Strong like I like it, ” she paused. “Not bad for a first bowl of tea.”

During my lessons, the tea room often served as a sort of sanctuary. It was nice to put a pause on the chaos of life, to find a few hours in the week to devote to my new hobby, to slow down and appreciate the art before me. But it would have been silly to believe that studying the Japanese tea ceremony could provide an escape from the everyday. After all, the room wasn’t a complete oasis. In the middle of tea ceremonies, security alarms went off, car horns blared in the parking lot adjacent to the building, and cell phones constantly vibrated — reminders of the real world to which we would all ultimately return. • 2 May 2014