Ah, spring is here and sidewalk cafés are again blooming across America! Some of my friends are thrilled at this seasonal turn. I am not.

My memories of outdoor dining skew toward the mildly traumatic. Such excursions often begin with companions who all but squeal “Let’s sit outside!” Confronted with such enthusiasm, it’s hard to argue for an indoor seat, and if I do I’m accused of being a troglodyte and killjoy. Enduring a long, silent, and pouty indoor meal is never fun, so I usually capitulate and go outside. Thus I leave the comfort of civilized shade and air-conditioning, and take my seat in the petting zoo set aside for masticating humans.

And here I sit — next to an overflowing dumpster screened partially from view but not in the least from aroma by cheap latticework from Home Depot. Or I’m curbside on a city street where every few minutes a bus passes and emits a great sooty plume of diesel exhaust, which gently alights upon my meal like finely ground pepper. Or, perhaps in the saddest tableaux of all, I’m sitting outside in front of a strip mall, corralled by some cagelike ironwork posted with stern wording against seating yourself, and overlooking an asphalt lagoon consisting of thousands of car windshields each reflecting the sun’s rays directly at me, as if I’m part of an experiment involving thresholds for scorched retinas. I once had to wear two pairs of sunglasses to make it through a lunch.

Truthfully, I’m actually not entirely opposed to outdoor dining — I’ve spent long afternoons in Europe overstaying my welcome at several beautiful cafés. And even in America I’ve lingered over coffee and drinks at a few lovely outdoor spots — in New York, in New Orleans, along the Lincoln Road Mall in Miami.

But the great majority of them just don’t seem to get it right. They might have the appropriate Bistro Collection Café Chairs. But everything else is slightly awry and amiss, as if designed by someone whose understanding of European café culture arose from having once, long ago, seen the Disney film The Aristocats. The café is poorly positioned, poorly arranged, or too exposed to loud traffic and passing cellphone shouters. Most U.S. cafés seem to relate to street life in an adversarial manner rather as a contributor. The technical term for this sort of design, I believe, is “fucked-up feng shui.”

Why have Americans been unable to figure out the sidewalk café?

The answer one sometimes hears is that the Parisians (or the Italians or Greeks or a few other outdoor cultures) were lucky enough to be born with some sort of café culture gene, while we were deprived. It’s therefore a fluke of genetics exacerbated by arbitrary migration patterns, like residents of Nordic countries being inordinately tall and blonde, or Texans attracted like moths to high school football games on Friday nights.

And it’s true: Americans have for around a century been drawn to what’s more or less the exact opposite of the sidewalk café: the private backyard. (“To screen your outdoor room from a nearby driveway, an adjoining street, or even the best neighbor’s yard, there are a wealth of fencing options,” advised one newspaper story on the boom in backyard patios in 1983.)

Yet there’s an interesting chronological argument to consider. Americans didn’t even start building their sidewalk cafés in earnest until around 1920, a time at which the car was starting to dominate our towns and cities. Our sidewalk cafés were never really connected to urban thoroughfares when they were solely pedestrian ways; the cafés were always add-ons in the age of the internal combustion engine, more like clip-on sunglasses than well-designed Ray-Bans.

Sidewalk cafés were, of course, a hallmark of civilized life in 19th century Paris. Some historians have dated their arrival to 1807; they flowered with the rise of the flaneur, a species of slow wanderer who fancied himself (all were men) as a shrewd professor of the street, deciphering modern life through unhurried and acute observation. The sidewalk café was aided and abetted by Paris’s 19th century planner-in-chief, Baron Georges Eugene Haussmann, who demolished small and dim alleys in favor of bright and wide boulevards flanked with trees and ample sidewalks. This allowed café owners to expand their dominion to the outdoors, and gave flaneurs a spot to sit and become part of street life at the speed of zero.

Parisians inhabit their public gardens and streets as though they were salons and corridors, and their cafés face the street and overflow into it as though the theater of passersby were too interesting to neglect even for the duration of a drink,” wrote walking historian Rebecca Solnit. 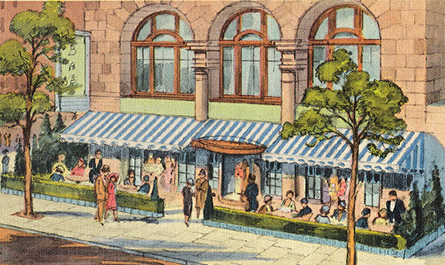 A 1940s postcard showing the sidewalk café at the George Washington Hotel in New York.

Adventurous American travelers of the Victorian and Edwardian eras were smitten by these sidewalk cafés, and returned home enraptured. “Everybody knows that the pavement cafés along the boulevards of Paris are among the sights of the place and are the wonders of most American tourists,” wrote a newspaper columnist in 1900. “To sit and sip cooling beverages and watch the ever-changing and brilliant crowds is fascinating pastime, and it has often been asked why such cafés have never been tried on this side of the Atlantic.” (Among the reasons he suggests: the fondness of American men for chewing tobacco, and the vast torrents of sepia-tinted spittle they produced.)

America’s first sidewalk café appeared to have surfaced in the summer of 1914. According to one account, it arose on the west side of Broadway, between 60th and 61st, just north of Columbus Circle. It was in front of a popular restaurant called Bustanoby’s, which audaciously set up what a reporter described as a “new sidewalk fringe of tables,” which he suggested “may be a pacemaker for other restaurants.”

Then came the two world wars, which exposed an even broader swath of young Americans to the charms of Paris. In 1919, a reporter asked an American doughboy about to ship home what he’d miss most about Paris. “I think it will be the café terraces,” he replied, “where you can sit at the tables on the sidewalks and drink while you watch the crowds go by.” The writer surmised that “many enterprising Americans in present in khaki” would be scheming to introduce more such cafés to their homeland.

And they did — they started to crop up in greater number in New York, and then in other major metropolitan areas around the country that sought to be more like New York. But they faced a disadvantage: competition for public space with the automobile, which was then well along its evolution from plaything for the affluent to essential tool for all Americans.

Sadly, the curtain was falling on the theater of the sidewalk just as the cafés were opening. And that may be why in the U.S. café seating invariably ignores the street. In Europe many of the cafés I’ve enjoyed best align their seats in rows facing outward, as if in a theater. The sippers of coffee and aperitifs can watch the spectacle of the street, while walkers can watch the sippers sip.

Yet in the United States, seating is more than not crammed tightly around tables, with half the customers aiming their backs to the street. This is not right. It’s as if the café’s interior had simply gone outside for a quick smoke. “There must be eyes upon the street,” wrote urban theorist and activist Jane Jacobs more than a half century ago, “eyes belonging to those we might call the natural proprietors of the street.” Jacobs mentions nothing about backs to the street. Our cafés are now essentially private backyards, situated incongruously along public streets.

Indeed, in jurisdictions that don’t carefully monitor this, the appearance of a new sidewalk café at an existing establishment is often an opening salvo — the umbrellas are soon replaced with steel scaffolding and a stout canvas roof overhead, then come the transparent flaps that drop down, followed by the propane heaters for the shoulder seasons. The space becomes wholly cut off from the public realm. You can connect better with the passersby at a shopping mall food court. The chief thing many enclosed sidewalk cafés contributes to street life is now a narrowing of the sidewalk, further complicated with advertising in the form of sandwich boards, making it ever harder for pedestrians to get by.