In the 16th and 17th century, when the renowned painters of other European countries largely painted religious scenes and royal portraiture, the Netherlands developed genres of painting that reflected the mercantilist, increasingly secular culture that produced them. Wealthy merchants and other upper-class landowners had buying power to rival the Catholic church, and their patronage encouraged guilds to practice highly technical, sumptuous paintings of things: seashells and flowers, musical instruments, fine silver, and of course food — all improbably arranged onto an overflowing table and rendered in luminous layers of oil. 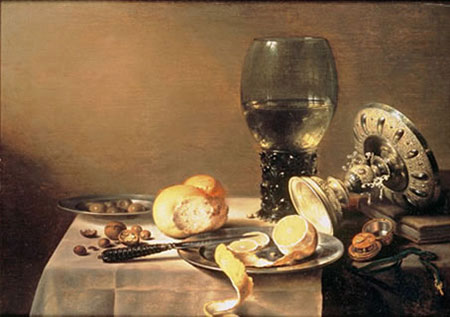 Lit as if by sunlight pouring in through a window over your left shoulder, the wine shimmers in its heavy glass goblet and the brown crust of an eggy bread roll glows. But though the edibles are appetizing, they are also in disarray: the nuts are already cracked, the coil of a half-peeled lemon skin hardens, and the cup is toppled over. Someone has left their pocket watch on the table.

The pocket watch in particular gives this still life away as a kind of vanitas painting. Dutch still life paintings in this period celebrated beauty, pleasure of the senses, and possession, but the citizens of this booming economy were largely devout Calvinists — and feasts for the senses were usually accompanied by a reminder that worldly pleasures don’t last. (All is vanity, as the speaker of Ecclesiastes says.) Vanitas still life paintings are typically loaded with both beautiful objects and metaphors, like this more straightforward example by the same painter: 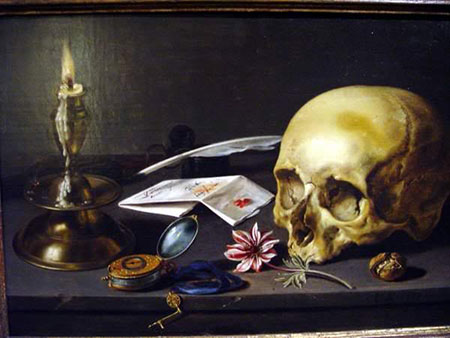 Alongside the cracked-open nut and the picked flower, a candle burns low, time ticks away on that finely made watch, and the most literal memento mori of all — a human skull — sits insensible to the worldly temptations around it.

Most still lifes of foodstuffs don’t invoke the specter of death so literally. Instead, they appeal to the viewer by presenting an appetizing array of food — whether elegantly sparse to display the tableware and linen, or a banquet spilling over with plenty — from the perspective of someone just about to sit down to the meal. They glow with brushstrokes so fine you imagine them as part of the oyster’s slippery texture or the goblet’s sculpted edge. They make you want to press your face to the painting to see if that sunny lemon smells as fresh as it looks. It’s only when you’re invested in consuming the painting with your eyes that you realize that the meal is half-consumed already, or that a timepiece ticks away the moments as you gaze, or that the banquet itself is decaying or crawling with insects. 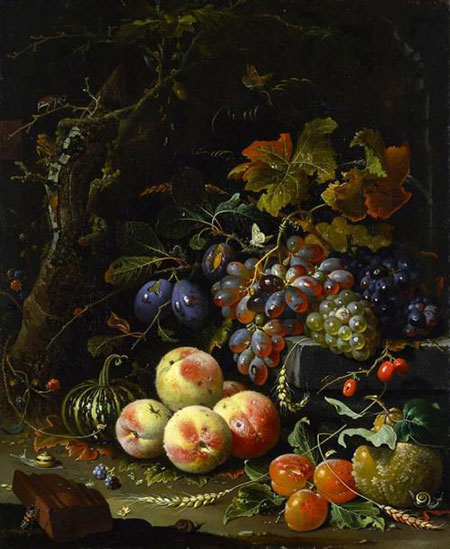 I love this genre of painting for its perverse insistence on having it both ways: sensuous, appetite-stirring beauty and moralistic metaphors all in one piece; a celebration of consumption and consumerism, meant to be possessed and enjoyed, which also mocks the buyer’s futile mortal endeavors. It’s easy to ascribe this peculiarity to golden age Dutch weirdness — this is the same culture that sunk millions into tulip cultivation and shell-collection! — but I realized sometime between movie previews that our own culture has its own obsession with memento mori and self-chastising consuming culture.

Academics have long shrugged off zombie television and film as loose metaphor for our brand-hungry culture’s fears of mindless consumerism, which has never seemed a satisfactory explanation to me. After all, 20th- and 21st-century zombies are a far cry from the original mindless zombies of myth, where the dead were raised by magic or the living was made dead-like with neurotoxins. Old school zombies were more or less puppets of a powerful shaman who would use them for repetitive labor — a mindless thralldom that definitely speaks to fear of mental enslavement. But contemporary zombies, even if they are of the old-fashioned slow and shambling sort, are predators. Many modern reimagined zombies are fast-moving, fast-multiplying, and always hungry — like a virus given a human face. Often they are problem-solvers, at least insofar as they may clamber over the barricade you place in front of them. Their capacity to produce horror derives less from their reanimated dead flesh or single-mindedness than from the cinematic situation that they (plural, unconcerned for life or limb, hungry for human flesh) are after you (singular, heart pounding, running for your life).

This makes more sense — to me, at least — if you think of zombies as a modern-day memento mori. For the 17th century Dutch merchant class, a still life was a shrine to the beauty and pleasure that money can buy: luxuries, delicacies, fine things that could be held in the hand or captured in oils, a small and fine possession in itself. But for contemporary society, the ultimate shrine and symbol of prosperity is the well-kept body — that is, a body that falls into a fairly narrow category of healthy, beautiful, and athletic. Despite all the goods and brands and tech toys, so much more of our collective wealth is sunk into sculpting or tightening, brightening or darkening, coloring and trimming, running, counting calories, and swallowing gallons of “smart” water. It makes sense, then, that today’s bogeyman and morality tale is a decaying body, a walking (or running) death’s head that all the cardio and training in the world can’t outrace. Zombies mock us, like the half-eaten fruits of the Dutch golden age and the weary speaker of Ecclesiastes, that though we may define ourselves by what and how we consume, it is all a pretty distraction from how we will be consumed. • 11 March 2013