Sometimes a floor is just a floor. That might be the case with this floor, which also happens to be mosaic and Roman. It is currently on display at the Metropolitan Museum in New York City. The floor was discovered a few years ago in Lod, Israel during construction of the Jerusalem-Tel Aviv highway. The floor was most likely part of a wealthy person’s private home from around 300 A.D.

For a 1,700-year-old floor, it is in excellent condition. Somewhere along the line, the rest of the house collapsed onto the floor and the mud-brick walls did a great job of preserving what they had buried. So goes history: The destruction of one thing is the unintended preservation of another. When the people at the Israel Antiquities Authority started to clear away the rubble, they discovered a beautiful and finely crafted scene. Animals are the primary subject matter. There is not a person to be found anywhere on the mosaic, a fact that, we are told, is very unusual. 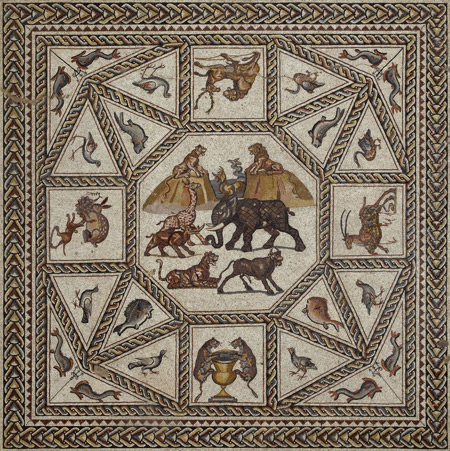 Another smaller panel is dedicated to the creatures of the sea and two boats. One suspects that the people of Lod were eating a lot of fish in the fourth century.

Of some amusement are the attempts by scholars and archeologists to explain what, exactly, is the significance of the floor. It is nice. There is no question about that. We learn something about the kinds of animals Mediterranean folk living under the Roman Empire at that time would have known. The boats tell us something about the seagoing practices of the time.

But the floor is also, in the end, insignificant. There is no religious imagery in the mosaics. We don’t know if the owner was pagan, Jew, Christian or anything else. It has no political or historical scenes. There is no obvious reference to mythology. If any of the animals are meant to have symbolic value, it seems a weak symbolism at best. No, the floor seems to be just a floor. Gifted to us from posterity, miraculously handed down through the chaos and destruction of the ages, preserved beyond all logic by the Fates themselves, is a pretty floor that means nothing.

How many people, I wonder, walked upon this floor over the ages, coming and going in the less-than-extraordinary affairs of a day, of an afternoon? What uneventful mornings did it witness? What pointless evenings when Roman sandals paced its length and breadth, its owner mulling over frustrations long since forgotten? Even the things forgotten by this floor have been forgotten.

You have to think of another Roman when you look at our floor from Lod. He was a poet named Horace and he often penned lines to his worldlier friend Maecenas, like these from iii.29 (trans. David Ferry).

Your mind, I know, is occupied with what
Concerns such men as you about the state:
The things the Seres might be planning, or
The Bactrians, once ruled by Cyrus, or

The troublesome Scythian tribe on the river Don.
It is wise of the god to conceal in the dark of the future
Whatever it is that is going to come to pass.
The god is amused at our anxieties.

Take care of the things you need to take care of today.
Everything else is as born on the Tiber.

Whatever did come of the plans of the Bactrians or those pesky Scythians? After Horace’s time, the Scythians were largely conquered and absorbed by the Goths, who went on to play a major role in the final collapse of the Roman Empire, which, presumably, had something to do with the abandonment and destruction of the home in Lod. All of these people and most of these stories are long gone, obliterated in time. For some reason, the floor remains, as if it had just been fabricated last week. In its muteness, in its emptiness and insignificance, it is an eloquent little floor indeed. • 22 February 2011