There’s nothing romantic about February. In most of the northern hemisphere, the shortest month is also the dreariest: a gray, wet, slog through yet another winter month, with spring a little too far away to offer much hope. Perhaps it’s no coincidence that some of the world’s most madcap celebrations take place in the February gloom: Mardi Gras and other pre-Lenten bacchanals tend to fall in this month, and the young men of ancient Rome celebrated Lupercalia mid-February by running naked through the streets and slapping young women with strips of leather.

Between the middle ages and the industrial era, St. Valentine’s feast day had something of this carnivalesque character in England, though more restrained. February 14th was one of several feast days that offered a brief reprieve from the grind of work and prayer, and the celebrations were playful, giddy, perhaps even a little irreverent. Unmarried village men and women played fortune-telling games to divine their future mates; one such game involved dropping names into a box and drawing out the name of your “valentine,” or the person Fate was disposed to match with you. Songs were sung; small gifts were exchanged.

In northern England, children might “go Valentining,” or parade around from door to door while singing and asking for treats. Among nobility and the wealthy merchants permitted to move among their circles, Valentine’s Day became another excuse for poetry and prestige gifts like jewels and silks. These gestures were not restricted to lovers: It was permissible, even expected, for courtiers to send flirtatious gifts and verses to one another’s spouses, so the effect was more of a merry display of one’s clever wordplay and material wealth. Samuel Pepys notes in his famous diary that he felt pressured to purchase rich jewels up to the court’s Valentine’s Day standards.

If these sound like dubious pastimes for a holiday in commemoration of a saint’s martyrdom, that may be because there isn’t really a documented connection between the holiday and any of the various Saint Valentines — two of whom are linked to February 14th, one of whom was celebrated in early May. It’s probably the springtime St. Valentine that Chaucer had in mind when he penned “The Parliament of Fowls,” the first written link between St. Valentine and romantic love. According to Chaucer, birds choose their mates on St. Valentine’s Day; it’s possible that this idea was already prevalent in oral culture at the time, but it could easily have been a literary invention that eventually inspired the equally invented stories of St. Valentine’s heroic efforts to perform weddings for Roman soldiers.

By the late 18th and 19th centuries, St. Valentine’s Day was more closely linked to the increasingly popular idea of romantic love. With mass production of print materials on the rise, people of all economic strata could purchase or make and send “valentines” — now meaning a holiday card, rather than a person — to the objects of their affection. These cards often featured elaborate cutwork lace, ribbons and trimmings, or etchings of birds, butterflies, flowers, and other vernal images: small-scale, small-budget works of art. At the same time, the irreverent, carnivalesque spirit still inhabited this increasingly secularized holiday: Valentines were often sent anonymously, permitting greater playfulness and license, and the classic rhyming couplets and riddles were just as well-suited to ridicule as to romance. The New York Public Library has a considerable online collection of cards from the turn of the 20th century: some sentimental, some playfully sweet, some mischievous, bawdy, or downright satirical. 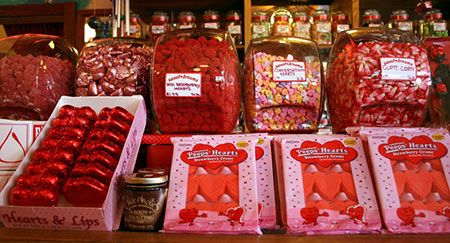 You’ll notice a conspicuous absence in this history. Where’s the candy? When we were kids, the colorful cartoon Valentine’s Day cards came with heart-shaped red suckers with Valentine’s greetings stamped on them in white, multicolored sugar paste hearts with even shorter greetings stamped on them in red, and a multitude of Kisses and other fun-sized chocolates. As adults, we might indulge in more elaborate or elegant confections for our loved ones: strawberries dipped in chocolate or velvety enrobed ganaches, perhaps presented in a heart-shaped box. Surely these are classic Valentine’s treats?

But in comparison to print matter, which was mass-producible from the 16th century on, sugar and chocolate refinement is a new-fangled invention. International competition for capital from sugar and other tropical crops (coffee, tea, cacao) pushed forward the technology to mass-produce these luxury goods in the 18th century; even then, the world didn’t catch up to the idea of making “luxury” available to a wider customer base until a burgeoning 19th-century middle class increased the demand for goods that were purely pleasure.

And once the demand increased, candy still entered into the long-held Valentine’s traditions by way of print culture: The sweet Valentines that caught on were the candies that incorporated pictures or wordplay. In the mid-1800s, Richard Cadbury, an artist as well as heir to the blooming Cadbury chocolate enterprise, began producing keepsake chocolate boxes with designs that echoed the popular sentimental images of Victorian valentines (namely: kittens, cupids, and flowers). Though chocolate is sometimes said to have aphrodisiac properties, it was the package more than the contents that brought them into keeping with the Valentine spirit: it was considered just as appropriate to gift chocolates to a child as to a sweetheart, both of whom would have enjoyed the sweets and kept the pretty box for trinkets. 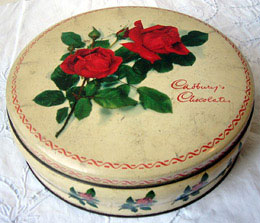 In the same period, the New England Confectionary Company devised a means to stamp clever couplets onto large sugar-wafer candies shaped as postcards, baseballs, horseshoes, and more — although it wasn’t until the 20th century that they figured out how to shrink the candies and the messages down to the Necco Sweethearts we’re familiar with today. The super-short messages, which range from the classic Valentine “Be Mine” to contemporary sarcasms such as “Yeah Right,” appropriately capture the roguish range of sentiments that have always characterized the holiday. It wasn’t until the mid-twentieth century that other candy brands got on board, producing special flavors or colors of candy just in time to be distributed among friends, family, classrooms, and (perhaps the least frequently of these) couples.

For contemporary Americans, candy can invoke childhood innocence, sweet indulgence, or even mischief. (It’s “cheating” to eat such sweet, nonnutritive foods.) It can be cheap and easily traded, or finely crafted for a more lavish gift. Perhaps that’s why sweets, when they became more available and versatile, became so deeply entrenched in present-day Valentine customs. Valentine’s Day history is, at best, a medley of theories of guesswork. No one really knows how the traditions started, or why they continue to evolve. But throughout this convoluted history, the recurring themes seem to be similar to those of carnival holidays. The day has historically been commemorated with exchange and activities among friends and family; as much mischief as match-making; as much irreverence as romance; and above all, a respite of pleasure in the dead of winter. • 11 February 2013