Eugene, a Belgian computer programmer, has retired to a cottage in southern Paraguay, and the pride of his golden years is his view. From his stone patio, he sees forested hills, the fringes of yerba mate plantations, and, in the distance, the crumbling ruins of a Jesuit settlement two centuries old. “Like a picture,” he says, and I nod to agree, even though my mind is not on the beautiful vista, but on the dark figure who once shared it.

The Nazi doctor Josef Mengele cheated justice for decades by hiding out in South America, sometimes in these very hills. Had he stayed in Germany he would almost certainly have died by the noose. Jews and Gypsies at Auschwitz called him “the Angel of Death”: He killed men and women for the dubious medical value of dissecting them, and for pleasure. He injected dyes into children’s eyes to see if he could change their color. When he ran out of Jews, he sent memos asking for more, and he got them.

Here in southern Paraguay, he found a life not of fear and seclusion but of relaxation and, like Eugene, retirement. After the war, an organization called die Spinne operated a shadowy network of safe houses and travel agents around South America, a sort of Hosteling International for Nazis on the lam. In Argentina and Brazil, they buried Mengele’s tracks well. But in 1960 and then again from 1963 to 1964, he lived openly in a lovely German town on the outskirts of Encarnacion, and even took a Paraguayan passport as “José Mengele.”

This community, called Hohenau, gave Mengele a life in some ways superior to the one he left behind in his native Swabia. Today, rich from the profits of cultivating yerba mate tea (consumed at a rate of gallons a day by all Paraguayans), Hohenau looks like northern California, with sunny drags and boutiques upscale enough to take plastic. The climate is hot but not miserable, and well-suited to exiles from northern European winters. Old Germans remember the doctor kindly, and a friend of Eugene’s says Mengele frequently hitched scooter rides into town, to see a dentist about a recurrent toothache.

The property next to Eugene’s, a lovely and secluded holiday resort, hosted Mengele at least twice. Nowadays it bears no sign of its former guest, except perhaps in its proudly Teutonic name: Hotel Tyrol. The hotel still hints at a European past. Unlike most buildings in this stiflingly hot land, its roof slants sharply, as if to shake off the Tyrolean snow that never falls. Narrow passageways among its rooms feel like those of an old German monastery, repurposed as a spa.

The oldest clerk on duty is too young to have known Mengele, and the whole place seems to have shaken off its haunted past, converting itself from a clubhouse for old Germans to a clubhouse for young Paraguayans. Today a group of high school students has taken over its hardwood dining room and is playing exactly the sort of frivolous grab-ass the Nazis would have detested. Chlorine wafts in through the windows from their splashing in the pool, and teenagers flirt in Guaraní, the local indigenous tongue. Mengele would have preferred the hoppy aroma of Bavarian beer, and the hum of serious German conversation. The center of activity in today’s Hotel Tyrol is not the Stammtisch but the pingpong table.

Paraguay’s German-descended dictator, Alfredo Stroessner, eventually revoked Mengele’s passport, and in time his flight from justice grew less and less comfortable, changing from holiday to paranoid nightmare. Nazi hunters caught his comrade Adolf Eichmann in Buenos Aires and brought him to Jerusalem for execution in 1962. Over the next two decades, Mengele lived skittishly, just a few steps ahead of them. In 1979 he drowned off the coast of Bertioga, Brazil, after an apparent stroke. DNA evidence years later confirmed the corpse’s identity.

But angels don’t die — not even Angels of Death. In Paraguay, rumors persisted. The evidence didn’t convince some people, including Germans who had known him, and Paraguayans who suspect that he took a new identity deep in the jungle, in a remote outpost called Nueva Alemania, or New Germany. 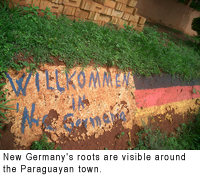 New Germany would have been Mengele’s kind of town. It was founded in the 1880s by Elisabeth Nietzsche (sister of Friedrich) and her husband, the noted anti-Semite Bernhard Förster. This couple had tried to whip their countrymen into a Jew-hating frenzy, but apparently not even 19th-century Germans were anti-Semitic enough for them. Disgusted, the couple packed off to Paraguay with a few other families and tried to establish a pure Aryan colony, a place to preserve the master race.

The colony failed utterly, ravaged within two years by parasites and the unfortunate realization that the Aryan volunteers’ European farming experience hadn’t prepared them to grow the local manioc and yerba mate any more than it had taught them to ranch llamas or stalk yaks. The anti-Semitic colonists came to hate the Försters, and began to wonder whether they had picked the wrong Jew-hating loons to follow into the jungle. Those who didn’t die of lockjaw or hunger left; a few stayed, and decades later, their children and grandchildren fought for the Third Reich. By now, anyone who had papers to return to Germany has already gone — unless, of course, they had reason to stay away.

New Germany is tiny, and when I arrived it felt so quiet that the whole town could hear my footfall on the main street. The red mud sucked at my boots with each step, and children — some blond — peered from windows at the noisy stranger. The afternoon swelter, ungodly and oppressive compared to the breezy heat of Encarnacion, kept everyone indoors, under fans and fighting a losing battle against the mosquitoes and biting flies that feast constantly on every man, woman, and mange-ridden hound in the region. 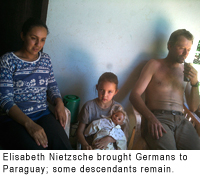 In 1979, not long after Mengele supposedly drowned, a visitor arrived in New Germany. He called himself Friedrich Ilg, and he bragged of a Nazi past. Mentions of the Jews sent him into a rage. He lived for five years in a little house on Nueva Alemania Street, and he received few visitors. But everyone knew he kept an arsenal of guns, much like Mengele, who packed heat at all times.

Alberto Risso, a town historian and statistician at the Public Health Center, thinks Ilg may well have been Mengele in disguise. He introduces me to Mario Neumann, the owner of New Germany’s restaurant, who agrees. Mario speaks no German (his mother was the last in his family who did), but over a plate of schnitzel he recalls a deranged lunatic living among them whose last act before fleeing to Asuncion was to accuse Herr Stern, a mechanic, of ratting him out to the Jews. In Asuncion, they say, he lasted only months before diving under the wheels of a bus.

No one shares Ilg’s enthusiasm for the Nazis — no one here seems to know what a Jew is, let alone why they might hate one — but oddly many seem to like the idea that Mengele might have walked among them for a few years. They take a strange, solemn pride in their Nazi: The Mengele legend connects their country to the world. Paraguay’s big neighbors, Argentina and Brazil, get so much attention. Here is a confirmed connection to the most important event in modern history, and it belongs not just to Paraguay, but to one of Paraguay’s most remote and obscure settlements, a sizzling steambath and open-air entomology lab abandoned by even its own Fatherland. 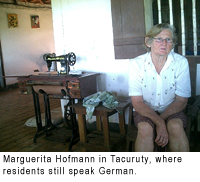 Marguerita Hofmann lives in the countryside, a half hour by motorcycle from New Germany, in a poor colony called Tacuruty. The dozen or so families who live here all still speak German by preference, and they all knew Ilg. She invites me to sit in the shade of her dusty farmhouse, next to an antique sewing machine.

“There was a rumor, but no one knows,” Marguerita says. She calls Ilg “Federico,” and sighs when talking about him. “I think he had an accident during the war, because I could hardly understand what he was saying. He was not right in the head.”

Her husband Fritz comes in from the fields, where he farms manioc. He fans himself with a sweaty straw hat. They have never been to Germany, and all this talk of Nazis makes them wonder why they would ever want to go. “There is more freedom here,” he says. “It is not Germany. You wake up when you want.”

As he speaks, the flies suck sweat from my neck, and a mosquito drills through the fabric of my shirt and into my shoulder. The pinch of the mosquito bite brings me a perverse instant of secret joy, though: If Mengele really did spend five years here, he didn’t entirely escape punishment. • 5 February 2008