When did the Western become a joke?

Did it happen in 1974, when Mel Brooks released Blazing Saddles, an irreverent spoof that found something to laugh at in every possible cliché of the genre? Or did we reach the tipping point in 1971, when the Marlboro Man, the cowboy emblem of cigarette addiction, was pulled off US airwaves, this once glamorous figure now despised as a contributor to countless lung cancer and emphysema cases? Or did it take place earlier, as the Western TV shows of the 1960s — Gunsmoke, Bonanza, Rawhide and the rest — grew more stale with each passing season?

Or was it John Wayne’s death (1979) that ended the golden age of cowboys? Or that campy moment when Roy Rogers put his stuffed horse Trigger on display as a tacky roadside museum exhibit (1967)? Or that cringe-inducing “Rhinestone Cowboy” song by Glen Campell (1975)? Or the publication of Dee Brown’s bestselling Bury My Heart at Wounded Knee (1970), with its harsh critique of the mythos of Western settlement?

Probably each of these contributed to the decline of the (wild) west, a precipitous collapse of Spenglerian proportions. I’ll leave it to others to argue over the precise chronology. But the end result was unmistakable: by 1980 the cowboy story was exhausted, drained of dramatic interest, and suitable only for parody, polemics and put-downs of various sorts.

Yet I am certain I can date the glorious moment when the Western came back to life. It happened exactly 30 years ago, and was marked by the publication of two momentous books: Blood Meridian by Cormac McCarthy and Lonesome Dove by Larry McMurtry. Blood Meridian was released on April 28, 1985 to little initial acclaim, but would later gain recognition as one of the most significant novels of the late 20th century. Lonesome Dove reached bookstores a few weeks later, and with more immediate success. The book received the Pulitzer Prize for fiction, and would serve as the basis for a hugely successful TV miniseries.

Yes, 1985 was the year that the West was won again. And this is an anniversary well worth celebrating. The success of these two books and the TV miniseries led to a revival of the cowboy genre that accelerated in subsequent years. In the early 1990s, two epic Westerns took home the Oscar for best picture: Clint Eastwood’s Unforgiven (1992) and Kevin Costner’s Dances with Wolves (1990). And McCarthy and McMurtry built on their successes with follow-up works of merit. Before Blood Meridian, Cormac McCarthy had set his novels in Appalachia, but now the Southwest borderlands served as the focal point for his new breed of Westerns — most notably in his celebrated “Border Trilogy” from the 1990s. McMurtry turned Lonesome Dove into a franchise that spawned three more novels and various TV productions. He also penned more than a dozen other books populated with outlaws, cowboys, shoot-ups and down-and-out Texans.

Yet the old guard never disappears without a final fight. In September 1985, James Michener published his 1,096-page novel Texas, an ambitious attempt to revive the heroic image of the cowboy and celebrate the Western expansion movement. But the time had passed for such stories. Texas Monthly gave Michener its “Bum Steer of the Year” award, noting the “tendency to resort to stereotypes” and “hackneyed dialogue” of the book. “Michener’s Texas,” they declared, “makes J.R.’s Dallas look like an informed and sophisticated portrayal.” A writer for the Harvard Crimson ridiculed the book as “a Texas-sized data base with a soap opera fairy tale grafted on.” Michener had a deep personal affinity with the state: he eventually moved to Austin, and set up an endowment for the Michener Center for Writers at the University of Texas. Perhaps his allegiance to the alluring image of the West prevented him from taking the daring reconstruction of its literary image we find in McMurtry and McCarthy. 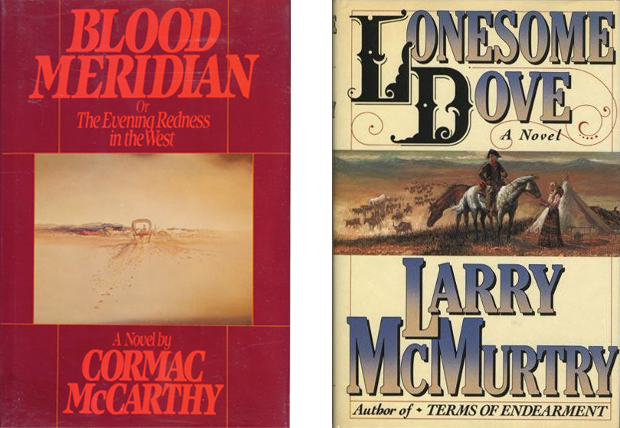 The “New Westerns” of these authors represented a sharp break with the traditions of the “Old Westerns.” These authors violated almost every rule of the genre. By the time they were done, you couldn’t tell who was wearing the white hats and the black hats — that time-honored method of identifying heroes and villains in a cowboy movie. Back in the days when John Wayne rode the saddle, who could have predicted that moral ambiguity and situational ethics would someday arrive in the Wild West? In the glory years, the town sheriff would have sent those bad boys packing on the next stagecoach. There’s no place in Deadwood for Paul Tillich and Jean-Paul Sartre! But in the New Western, the very appeal of the story comes from its…well, let’s call it, ethical complexity. Perhaps nihilism is an even better word.

If Nietzsche were a gunslinger, he could serve as a fitting kemosabe to McCarthy’s Judge Holden. Under the old regime, Gary Cooper would have taken out that German interloper at high noon.

Alas, the characters in the New Westerns continually face problems that can’t be solved with a six-shooter and fast horse. In Lonesome Dove, we follow the exploits of two former Texas Rangers, Gus McRae and Woodrow Call, whose bold attempt to revive the spirit of the Wild West with one last cattle drive into virgin territory results in a series of mishaps, accidents and tragedies. We approach their journey with all the assumptions readers bring from previous cowboy stories. We expect them to emerge as heroes. We desperately want them to live up the job requirements as defined by previous cowboys. And sometimes they do, but just as often they fall short.

Yet McRae and Call are positively heroic compared with the übermenschen who set the tone for Cormac McCarthy’s Blood Meridian. At first glance, the characters here seem little different from previous literary cowboys. Our key protagonist doesn’t have a name, merely goes by “the kid” — with all the implications of innocence such a label conveys. He falls in with Judge Holden, and once again the name suggests an allegiance to impartial justice. But don’t be fooled by the titles in Blood Meridian. A brutal lawlessness permeates this story, and the very same conflicts that, in other Wild West novels, lead to courageous and laudable exploits will here spur the most despicable and depraved actions.

This is the darkest cowboy story I’ve ever read. Perhaps Blood Meridian had to sink so low in order to shake readers out of the complacent attitudes inculcated by the Old Westerns. Yet McCarthy makes his book all the more disturbing by the exquisite precision of his prose. The descriptions of landscape, the minute observations of flora and fauna, are handled with such deftness — almost as if our author combined the best traits of the natural scientist and visionary poet. Yet the beauty of the writing simply disarms the reader. We are left unprepared, lulled into an admiration for the great outdoors, when the blood starts flowing….as it does copiously and with mind-numbing regularity in this work.

The New Westerns of 1985 (and after) no longer offered readers escapism. That promise of uplifting adventure, of light entertainment and relief from the day-to-day, had represented the key covenant of the Western genre since it first appeared in the nineteenth century. At the very dawn of the cinema, filmmakers held on to these same principles. You can see them at work in The Great Train Robbery, which set off the cowboy movie craze back in 1903 — it was, in fact, the very first American action film — and this covenant continues in all those cowboy serials and films from the 1930s and 1940s. Occasionally a filmmaker would reach for something darker or grander, for example in the films of director John Ford. But the genre could never afford to walk away from its celebration of heroes and their brave deeds — for the simple reason that audiences demanded them. And then came the cowboy takeover of television, which reached its peak in 1959, when the three major networks scheduled 26 different prime time shows with cowboy themes. Even in the 1960s, we see the genre still capable of living up to its promise of mindless adventure, but with the arrival of the Spaghetti Westerns we can already detect signs of the formula falling apart. Many viewers of these films found them campy and funny, already setting the stage for the Western parodies of the Blazing Saddles era.

But what a brave decision for McMurtry and McCarthy! Abandoning the promised escapism in a Western was akin to opening a theme park without any rides. It would be like publishing a romance novel that ends in a bitter divorce and custody battle. Or writing a horror story, but leaving out the scary parts. The audience had grown so accustomed to heroic Westerns that they had forgotten that any other way of telling a cowboy story was possible.

But when the Western gave up its promise of empty entertainment, it finally could achieve its true destiny. The cowboy story could now take its place as the authentic American epic, raw and unapologetic. When writers gave up the pulp formulas that had charmed readers during the first three-quarters of the 20th century, a new honesty and complexity could emerge in their works. Only after we stopped assigning roles on the basis of white hats and black hats could we come to grips with what was really wild in the Wild West.

That’s the wildness that we find in Cormac McCarthy and Larry McMurtry. Thirty years ago they were trailblazers finding a new path in the wilderness. That’s a fitting task for any cowboy writer. And we still benefit from their outlaw spirit.