I am obsessed with books about people who, for unclear reasons, ruin their own lives. In Freudian terms, it’s Thanatos, the death drive. The classic example is that fear you feel on a rooftop or near the edge of a cliff, a fear not so much that you’ll fall but that you’ll throw yourself over, into the void. My own version of this fear: When I pull out my phone to take a photo of the vista from a bridge or a precipice, I’m afraid I’ll drop the phone and automatically go after it.

But this isn’t the death drive, not directly; it’s irrational fear of some latent suicidal tendency that may not exist. The characters I’m thinking of don’t throw themselves off literal cliffs. It’s slower, and stranger, like sleepwalking into the sea. 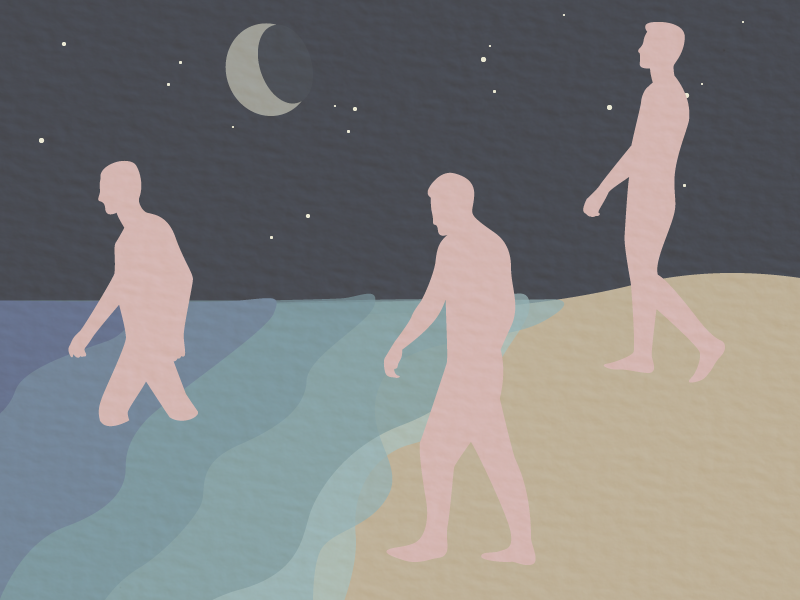 Perhaps my favorite take on the death urge in literature is Two Serious Ladies by Jane Bowles. This novel follows the lives of two women, Christina Goering and Frieda Copperfield, who are both mysteriously attracted to spiritual debauchery and destroy themselves in pursuit of it. Miss Goering is a very rich woman who forsakes her life of comfort in Manhattan to live in destitute conditions on what must be Staten Island. When this relative discomfort becomes its own kind of comfort, she has to drive herself to new lows:

In the afternoon Miss Goering did some serious thinking. She walked back and forth in front of the kitchen door. Already the house, to her, had become a friendly and familiar place and one which she readily thought of as her home. She decided that it was now necessary for her to take little trips to the tip of the island, where she could board the ferry and cross back over to the mainland. She hated to do this as she knew how upsetting it would be, and the more she considered it, the more attractive the life in the little house seemed to her, until she even thought of it as humming with gaiety. In order to assure herself that she would make her excursion that night, she went into her bedroom and put fifty cents on the bureau.

Meanwhile, Miss Goering’s friend — she calls her “little Mrs. Copperfield” — travels to Panama with her husband, whom she adores, but once there she becomes infatuated with a teenage prostitute named Pacifica. She knows she should not be consorting with Pacifica, but can she choose not to? Mrs. Copperfield’s gender and the era make choice an illusion, or, at best, a trap — no good can come of defying expectations:

Mrs. Copperfield started to tremble after the girl had closed the door behind her. She trembled so violently that she shook the bed. She was suffering as much as she had ever suffered before, because she was going to do what she wanted to do. But it would not make her happy. She did not have the courage to stop from doing what she wanted to do. She knew that it would not make her happy, because only the dreams of crazy people come true. She thought she was only interested in duplicating a dream, but in doing so she necessarily became the complete victim of a nightmare.

There is so much frightening paradox in this passage. Doing what she wants, conventions be damned, is what should require courage, but instead she feels helpless to deny herself, even though she is sure that indulging her desires will make her miserable. And yet, she is miserable all the same! Seeing the forked path, the false choice, is itself misery.

What motivates these “serious ladies”? Their behavior seems irrational and yet consistent with some opaque, internalized moral code — “she decided that it was now necessary” — as if only by daring themselves to walk into the darkness can they prove God is on their side. 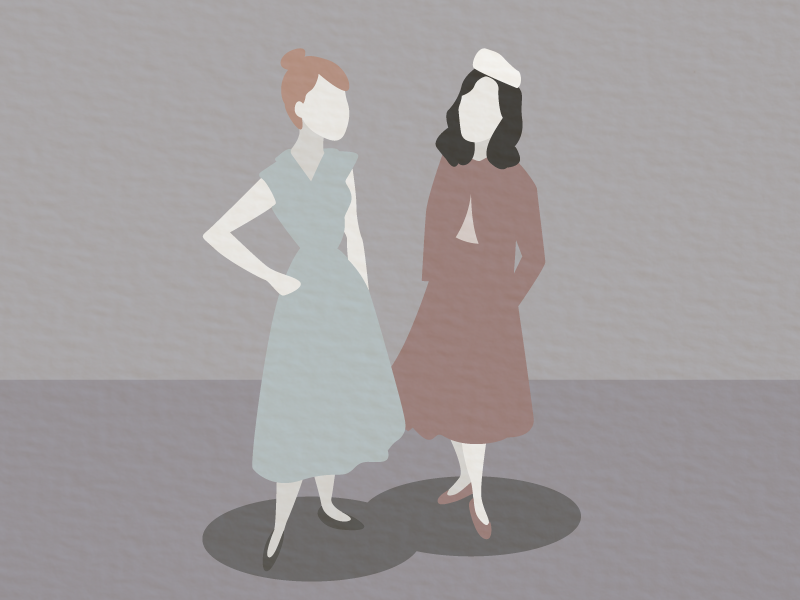 “I am taking her back to Panama as soon as I am able to book passage on a boat.” She ordered another double whisky. “Well, what do you think of it?” she asked eagerly.

“Perhaps you’d better wait and see whether or not she really wants to marry him.”

“Don’t be insane,” said Mrs. Copperfield. “I can’t live without her, not for a minute. I’d go completely to pieces.”

“But you have gone to pieces, or do I misjudge you dreadfully?”

“True enough,” said Mrs. Copperfield, bringing her fist down on the table and looking very mean. “I have gone to pieces, which is a thing I’ve wanted to do for years.”

By fate or by will, she has achieved self-destruction.

J. Robert Lennon’s new novel Broken River is concerned with similar questions of choice, cause, and effect. It’s a study in point of view — the book begins by positing an “observer” who bears witness to a double murder in the woods of upstate New York: “Anyone remaining in the house — but there is no one — would be able to hear, through the closed door, the footsteps of three people hurrying across the porch and down the stairs.” Then, a few paragraphs later: “If an observer in the house were to climb the stairs that lead up from the kitchen, he or she would reach a narrow hallway interrupted by three doorways.”

This hypothetical observer, having been imagined, pops into existence like a new universe. It becomes the capital-O Observer. It remains in the house for years, while it variously sits empty, becomes a refuge for partiers and vagrants, and goes on and off the market, eventually being bought and remodeled by Karl, an artist from New York City, who then moves in with his wife, Eleanor, and their 12-year-old daughter, Irina.

The Observer — the sentient embodiment of a third-person P.O.V. — is present throughout the novel, though only some chapters are told from the perspective of the Observer (meaning, of course, that there is another, hidden, meta-meta P.O.V.!). The Observer’s self-awareness increases steadily — it realizes gradually that while it is basically omniscient and unbounded by time or locality, the scope of its interest is confined to the main characters and plot of Broken River:

It is time to turn its attention to the family many miles to the north, though the Observer is increasingly aware that it needn’t choose one time, one place, one group of human beings to attend to. Indeed, it is quite capable of observing anything, all things. But it has begun to realize that its purpose, as opposed to its ability, is limited: or, more precisely, its purpose is to be limited. It is unconcerned with, bored in fact by, the enormity of its power. It is interested only in the strategic – the aesthetic – winnowing of that power.

The Observer, then, in choosing this story over all other possible stories, is sort of the writer, and sort of the reader. Occasionally, the characters in the book sense the presence of their Observer — like in The Neverending Story when Bastian realizes Atreyu and the Empress are talking about him. One day Irina is practicing her guitar, when a certain chord she plays “makes her feel something very specific and strange” — “It is the feeling of being watched.”

And not watched as in monitored, like there’s a hidden camera and somebody somewhere is observing her on a screen. The watcher is here in the room with her. A presence. A thing without form or motivation but with a consciousness.

Of course, there is a hidden camera (the hidden P.O.V.) and somebody, somewhere (me, in this case) is observing Irina as though on a screen. 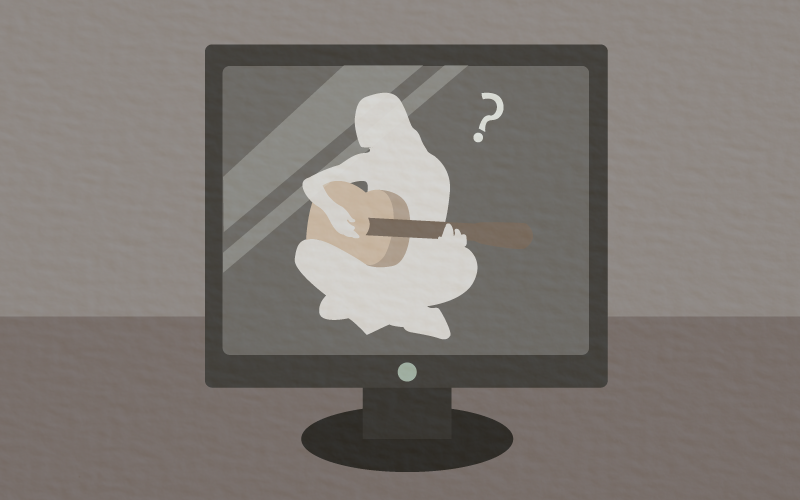 Is it true, though, that the Observer is without motivation? If the observed can observe it back, it must have some influence — if not godlike authorial power. From outside we know that J. Robert Lennon is the one deciding these characters’ fates, but within the world of the novel, it’s unclear how much is inevitable. Karl, Eleanor, and Irina frequently seem to make stupid, avoidable mistakes. The two parents marry only on a whim when, as near strangers, he gets her pregnant. They move to the woods as a form of punishment for Karl’s infidelity, but he continues his affair, and sloppily, from upstate. Irina (who aspires to be a novelist like her mother and becomes obsessed with the unsolved murders that took place near her new home) forms a friendship with an older girl named Sam she’s convinced was at the scene of the crime. Pursuing this storyline, she inadvertently puts Sam in danger.

The Observer is too placid for annoyance, or it would find the humans’ behavior annoying: “They refuse to seize available opportunities that might expand their experience even slightly; they maintain obsolete habits rather than adjust promptly to new circumstances. They seem almost to prefer ruin to voluntary change.”

We do seem to prefer ruin, don’t we? But maybe the ideas of preference and volition are imputed by the gods to us humans, mere slaves to our programming. I read once that a mechanical ant, designed to move in a straight line, would amble in erratic patterns if placed on an uneven surface – it would seem to have its own plans, to be making constant choices. But the code itself is simple. There is no free will there, no mystical intervention between cause and effect. Are Lennon’s characters mechanical ants — or, more to the point, is there any level on which they’re not mechanical ants? Whose fault is it, when things — as they must, in a crime thriller, even a meta one — go wrong? Is everyone to blame or no one? “Bad things don’t need reasons to happen,” as Sam says at one point. Elsewhere, Eleanor lies in a hospital bed and dreams deliriously of pigeons, and thinks, or half-thinks, sharing her thinking with that other, hidden, lower-case-o observer (the fourth person?), “Death is everywhere and alive, but is motivated by nothing.” 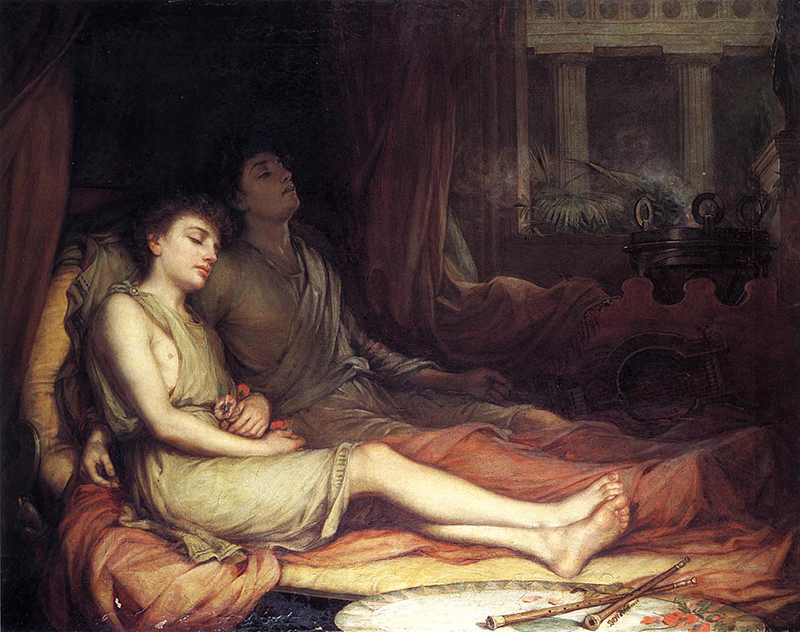 Hesiod and Homer both wrote of Thanatos and Hypnos as twins. “And there the children of dark Night have their dwellings, Sleep and Death, awful gods.” (Do children resist going to sleep because they imagine sleep as death? Or do they, like an astronaut I once spoke to, who could go days without sleeping, just prefer being awake?) Kate Chopin called her classic tale of female self-destruction The Awakening. Mrs. Pontellier’s awakening is the realization that she is, essentially, free to live without her husband and to have affairs — that the social conventions of her time (like our crumbling democratic norms) are not law, and are easily broken. But it’s an empty kind of freedom, and like Mrs. Copperfield, Edna Pontellier can’t “choose happiness” without ruining her own life. Happiness is misery; there’s no awakening without sleep.