There’s nothing to indicate that this evening’s 20-minute amble to the Trinity Church Cemetery and Mausoleum will end differently. We take to the block like another of our twilight strolls. Down 150th, greeting neighbors and their dogs. Up Broadway, passing the flower shop, Taqueria San Pedro, a bodega that smells inexorably of frying bacon. Along 153rd, the cemetery to our left walled off by gothic concrete and iron-slat gates. And back down Amsterdam, the litter of Styrofoam, plastic bags, empties, trees clotted by discarded wrappers and shit, except for the church by 152nd whose constituents are invariably kind and welcoming and who make a concerted effort to maintain their area.

Rosetta does quick piss-upons, mawkish marks her spot, seeming almost sad or ashamed to be asserting her presence. She sniffs at noisome interests. She raises her hackles at unassuming brothers and sisters.

It’ll be months before I pick up Guadalupe Nettel’s After the Winter, whose cast of dysphoric characters frequent Parisian cemeteries as if obeying the centripetal force of our fate. I’ll interpret these cemeteries as all the bad buried in their pasts, whom or what they choose to revisit.

Rosetta was beaten and neglected as a pup. My partner, Katie, tells me every so often about how the vet proclaimed hers the worst case of mange she’d ever seen. At 13 years, Rosetta still barks at apartment guests, tall men, skateboarders, and larger dogs possessing particular phenotypes, such as piebald shepherds and golden doodles.

It could’ve been anything, a critter, a squirrel, a cat — I’ll never know what spurs her to dart across the intersection of Amsterdam and 150th, except that, before I even realize she has, a meaty thud and scream meet my brain’s point of brisance. The impact is like a bomb planted beneath my capacity for hope, the shards of tragedy cleaved to my exsanguinating desire to exist. And yet, somehow, paradoxically, this terrible starburst of fear and pain lures me like a sonic magnet to Rosetta’s trapped body.

An SUV’s front wheel has rolled over her midsection. She’s pinned against the underbelly’s infernal rust of metal and gas, shrieking with unmistakable agony. I can’t pull her loose. I slam on the driver’s window and he puts the car in reverse. From Rosetta’s mangled mouth emits unfathomable sounds as that vehicle’s front left tire rolls over her once more. Unidentified cries chase the SUV’s escape, “That guy just hit that dog!” Later, I’ll wonder if this was Cheryl, the block association’s sassy matriarch.

Having carried her inside, I sputter and spew nonsensical expressions of horror and anguish – that we need to go to the hospital right now, I can’t believe she’s alive. Part of me begins grieving both her and the person I was before I let this happen to her.

On the contrary, Katie is calm and admonishes me to follow her example. But she wasn’t there. She didn’t see – she didn’t hear. She isn’t having any of it, and for good reason: Rosetta needs none of my panic. She needs composure. I look to my roommate, Devin, who stands at an appropriate distance, exhibiting appropriate concern, performing the appropriate calculation of the probabilities and corresponding best courses of action. 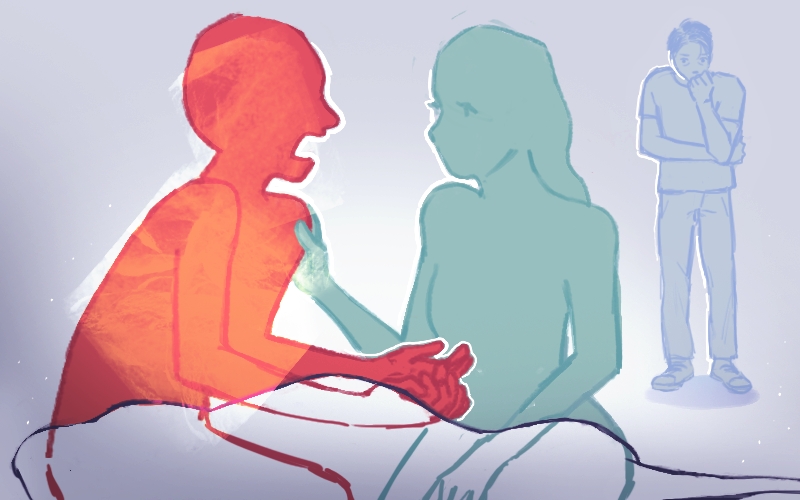 So I try. I pace. I breathe. I say things in controlled tones as Katie soothes our trembling pup, whose surface wounds are limited to a gash on her left cheek and some nasty road-burn down near her thigh. The lack of blood might look a miracle, but she’s shaking with confusion and fear and, a lot like love’s preeminent cliché, it’s what’s inside that counts.

Devin offers to ride with us to the animal hospital on East 62nd Street, from which he can train back up to the bar to host the Dead Rabbits Reading Series, which he and Katie started over five years ago. Tonight’s lineup includes a hero of mine, Sergio De La Pava, who will return months later because we weren’t able to make it.

With Katie at the wheel and Devin riding shotty, I sit in the back with Rosetta, holding her in my lap, something she’d never allow in lieu of present circumstances. The Tour de FDR helps soothe us both. Usually a real talker, Rosetta performs none of her chatty routines &madsh; none of the backseat driving, the pent-up panting and pacing, the lugubrious falsettos. She can only tremble. I kiss her, tell her how sorry I am, that we’re doing everything we can to make sure she’ll be alright. Perhaps I’m not seeing the forest through the trees, but we seem to have made it out of some woods. It’s been half an hour since the accident and, though still trembling badly, hasn’t exhibited any additional symptoms of serious deterioration.

A deeply traumatized rescue, Rosetta hates people. Her fearful growls are muzzled in tight leather. We plead with the doctors to sedate her. They promise, which underwhelming piece of assurance nonetheless sustains us over the next eight hours or so.

Releasing Rosetta to the doctors reverses our roles: Katie breaks down into my arms, while I assume a guilt-ridden excuse for composure. Katie thanks me, expresses gratitude that I’m here for her, and I’m baffled.

Paradoxes wield the power to hold us in thrall to their defiance of logical sense. How can there be a bigger number than infinity? Such contradicting truths wield their power by synthesizing what our senses would otherwise deem impossible. Our very idea of the supernatural, the fantastical, the paranormal depends on such phenomena being impossible — the superhero’s strength, the sorcerer’s magic, the seer’s prescience.

But much of our lives have seen the consummation of the impossible. Instantaneous communication across thousands of miles, digital access to unending oceans of data, cures for diseases that were hitherto ineluctably fatal. Have such abilities been demoted from the realm of the divine simply because they come with a scientific explanation?

Rosetta’s whines wake me at some ungodly hour or another. “Come on,” I pitch up, patting the covers where she should jump and join us in bed. I feel the flutters like winged fear as the veil of sleep is lifted with each mawkish whinge. I flop back in bed after deciding I can’t parse what she wants. After another minute of distressed moans, Rosetta recedes to the common area and retakes the couch.

Fidgeting in bed for comfortable purchase, the flutters redouble — winged fear tickling, then scratching, needling my stomach, conducting its eponymous work. I’ve yet to discover how to neutralize this terrible moth whose wings stop flapping long enough to sink its fangs, tipped in the poison of paranoia, into the seat of my sanity. Soon I’m circling the conscious drain, riding the tide of nauseous vertigo that will funnel me into the blackness. 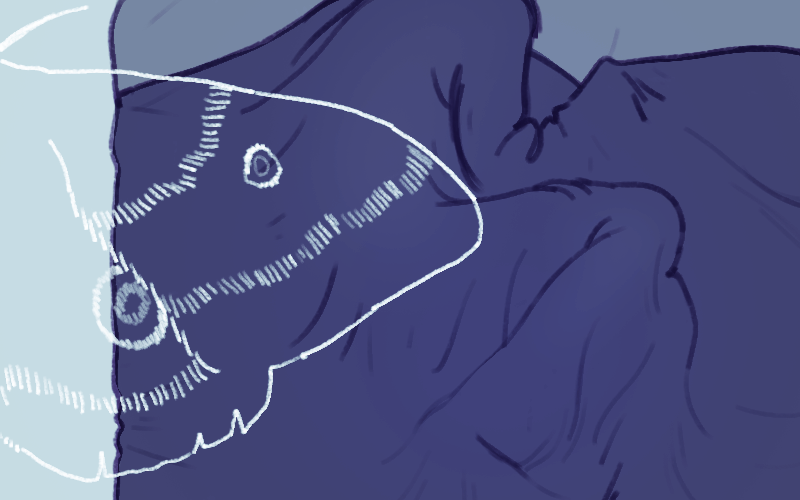 Rosetta returns to the kitchen and watches me with an unseen measure of expectancy as I labor from bed and approach for a glass of water. The act of standing delivers my fait accompli: I can’t stand without holding a wall; my only recourse, according to my poisoned mind, is to fill a glass of water, a futile attempt to focus my mind on a simple task.

The last time it happened I tried resting my head on the faucet until it passed — only it was I who ended up passing out onto a friend’s kitchen tile, my head gashed against a wall’s corner and my toe still busted to this day. That was on New Years, and it came without warning.

This time I’m all but surrendered to my fate. I fill the glass, hoping in vain to find somewhere to sit and sip before the blackness. Alas, before I can draw the glass from the sink’s basin, I’ve hit the floor, vitreous shards dazzling Katie into consciousness as if tapping in for my sudden absence.

Hovering over me as I come to, Katie is the picture of somnolent alarm — one of countless rolling paradoxes. Dipped in a warm saline solution — the only way to explain for the sudden flood of sweat covering my body — I ignore Katie’s pleas that I remain supine. The picture of unstable, I stumble to the bed, trip myself over its foot, curling into a shivering fetal position.

The mind plays tricks. This fear in the face of a terrorless sleep, Katie’s return to bed despite the continued susurrus of broom bristles on varnished wood — only it’s not Katie, it’s Rosetta. A rescue, remiss to snuggle close, Rosetta nuzzles near my face, whimpering softly, knowingly, consolingly.

Telepathy, the sight, auguring – our senses tell us such phenomena are impossible. Rosetta’s behavior that night, however, moved prescience from the realm of the impossible into that of the paradoxical. Though I’ll probably never know how she divined my imminent panic attack, I am reminded once again that faith, far from being the sole property of the religious, hinges on hope for recourse we can’t see or feel or know. Another paradox: hoping for something whose possibility has yet to be revealed and, to our minds, is therefore yet to exist.

Guilt is a terribly reductive term we use to express what, in reality, is a deeply shaded negative tone. It often blends with seemingly contrary feelings such as pleasure or greed, and can even be felt despite the fact of innocence Underlying guilt is the global feeling of unworthiness and undeserving, or of deserving punishment.

Most sins go unpunished. Rosetta, by virtue of ignorance, couldn’t condemn me in the first place. Devin can barely denounce a convict, let alone my spot of gross negligence. Katie thanked me while we were in the hospital. I can only assume she absolved me for my intentions.

Punishment has its place within the schema of reform. Certain individuals certainly respond to punishment with contrition rather than rage or spite. But punishment, whether public or institutional, whether by unregulated doxing or judicial decision, too often begets further trauma, which begets further transgression. Trauma’s legacy challenges none more than notions of free will. 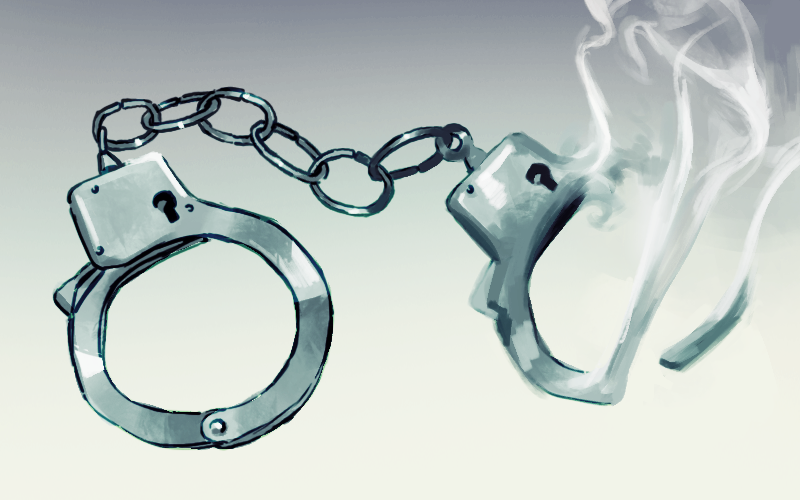 What, then, constitutes a punishable offense? How do we hold ourselves accountable if control is an illusion?

Short of performing a disappearing act &mash; the illusion of mental cures — my guilt molts, sheds its skin for updates. Tonight’s molting occurs amid the eerie sterility of the animal hospital on 62nd Street. I’m sitting next to Katie, forcing myself to swallow her words: “It’s not your fault.”

Forgiveness is rubbery and fibrous. It rips the polyps along my throat lining, requires a biblical flood of stomach acid to break down. It stands in direct contradiction with the fact that I was walking her, responsible for her when she was struck by an SUV. And yet: this forgiveness, it lies parallel to the fact that the ultrasound, done with the intent of locating any internal trauma to vital organs, happens to reveal a tumor situated against her spleen.

We pay $8,000 to have the tumor removed. I’d have paid double that, had it been necessary. I’d have stolen from all the jackets and purses in New York. Hit a hundred cop cars and, instead of running, taken the cuffs and paid the lawyers four times over again.

Katie and I take turns sleeping on the couch. Rosetta can’t hop up to the bed, which she still tries, much less step off the couch without squealing. The plastic cone mocks her, enables the itch of her stitches. She skitters between resting spots to limit her stomach’s exposure. We give her Trazadone and Codeine. When she no longer needs them, I take one of each, rasa the tabula, and wake up inside new skin, thin and limpid.