All the world is sad and dreary

In a talk about her development as a poet, Louise Gluck relates the time when she, as a young girl, created a competition for the greatest poem ever based on what she had read so far. She chose Blake’s “Little Black Boy” and the song “Swanee River” as the finalists. Looking back on this (to me) unexpected choice, she said, “They are both totally alike, the same solitary voice raised in lament and grief.” I thought about these two poems and their connections to race, something Gluck doesn’t address, perhaps because it is so obvious. I was especially intrigued by her choice of “Swanee River,” both music and lyrics, because when I was the same age as she was, picking her own literary winners and losers, I was busily working my way through a book on my parents’ shelves, The Fireside Book of American Songs. Although I could play the melody on a recorder, I was mostly interested in the lyrics — favorites like “Bicycle Built for Two” and the songs of Stephen Foster, especially “Swanee River.” I was captivated by words like “creation” and “longing” and “plantation,” far too complicated and clearly beyond my comprehension:

And for the old folks at home.

My fascination with this song has a complicated origin. When I was little, my mother used to drag me with her whenever she shopped for clothes at a small department store called Chatlins, in a small city outside Philadelphia. While she went to search or clothing, she always left me in the middle of a terrifying formation of headless white mannequins, all donning bras, and girdles. But just an aisle away there was a free-standing wooden display case, eye-level to my seven-year-old self. On its side, there was a button to press, which started a whirring sound and then a lever to pull, which opened a curtain to reveal a rural scene. (Cotton fields and barges, I’m guessing, though I don’t recall this part.) The ensuing show was free — no slot for a penny, nickel, or dime — and commenced strummed banjo music from a speaker the case. Then, a gangly, flapping marionette in blackface, the size of one of my sister’s Barbie dolls, shuffled and tapped, singing, “Way down upon the Swanee River . . . ”

My mother seemed to be gone for hours, having vanished into a nearby dressing room and briefly reappearing from time to time to talk to the sales clerk. But I was utterly transfixed and spellbound. It must have been a combination of the music and lyrics as well as the size and proportion of the man. If he had been significantly larger I’m sure I would have been terrified. Conversely, if he had been further miniaturized, I think I might have felt like I was simply looking at a curiosity, the inner mechanism of a or a flea circus. But this was the perfect size for me — I’m sure toy designers addressed the same concerns when they created Barbie.

The minstrel show was one of my first encounters with overt racism, even though I had no sense of what that term meant. There were no African-Americans in my mostly Catholic and Jewish suburban neighborhood. (Though when I was older, heavyweight champ Joe Frazier and jazz organist Jimmy Smith lived there, both houses on my weekly bicycle paper route.) A few families had “cleaning women,” almost all taking the “A” bus from North Philadelphia or Nicetown to the end of the line and then walking one by one down the street in the morning and back up the street at dinner time. But that was the extent of my inter-racial experience. This was the 1950s and early 1960s and, although the civil rights movement was in full force, I don’t recall any discussion of race, except perhaps by one of our neighbors who owned a restaurant supply store in Brewerytown and was always eager to talk about his “lazy and cheating Black employees.” Part of the silence regarding race was, I’m sure, due to demographics: most of the inhabitants of my neighborhood, especially the Italians and Jews, had only recently left their Strawberry Mansion or West Oak Lane rowhouses back in the city. And they were focused almost entirely on paying their mortgages and furnishing their backyards with swing-sets, finding a local swim club, and making sure their kids did well at school. Again, in terms of demographics, almost all the kids in my neighborhood were under the age of ten, too early in this place and time period for them to be aware of issues in the larger world. This changed, of course, in a few years with the advent of the ’60s when most of these same kids became involved, to a greater or lesser extent, in anti-war/anti-draft activities, drugs, rock festivals, communes, and yes, even civil rights and the Black Power Movement.

But at age seven, back in Chatlins, Jewish-owned and later frequented by the town’s Black residents (and called Chitlins by the racist townspeople), I was utterly mesmerized by the entire miniature, mechanical, minstrel show song, melody, and dance. I distinctly recall the flush of emotions extending to the tips of my fingers and toes. I remember the flutter in my stomach, heart palpitations, a kind of sudden, drastic release from everyday anxieties and the almost addictive need to play the scene over and over as though halting it would cause me to collapse in despair. It was nothing less than an intense aesthetic experience, no doubt, similar to others I’ve had throughout my life. If I had known the phrase at the time, I would have labeled it the Stendhal Syndrome, what the 19th-century French novelist experienced when visiting the great works of art in Florence. Like him, I thought I would faint. And those feelings of righteous indignation and anger over the racist entertainment that I might (should) have had if I were older were simply beyond my comprehension. It never occurred to me that an appropriate response might have been to smash the glass case or mangle the gears to make it stop. The correct response. 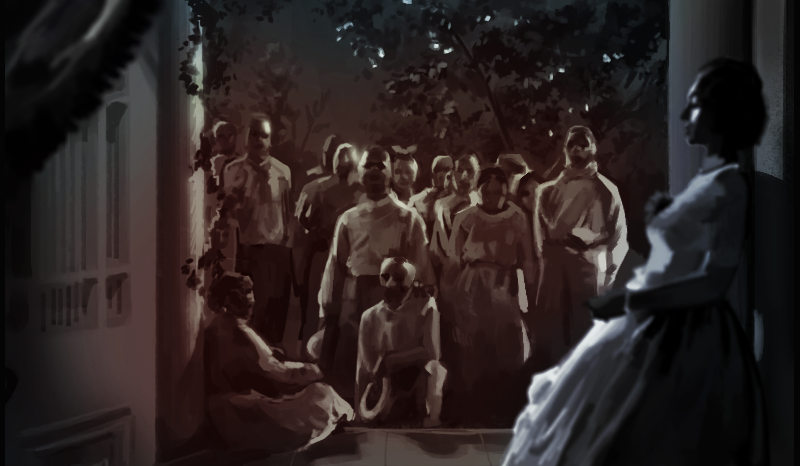 But here’s where it gets tricky. I recently listened to several recordings of “Swanee River.” The most moving and powerful by far was the version by Paul Robeson; it carries within it a deep and weary sadness that is as beautiful as it is hard to listen to. The other memorable version was by Bing Crosby, from the 1935 film, Mississippi. The scene opens with a group of dressed-up and dolled-up Black children performing the song for their families and relatives. They seem to be in some sort of parlor while wearing their best clothes and a boy and a girl try earnestly to reach the high notes without screeching. They are clearly meant to be seen as cute and precious, ardently trying to please the adults gathered in the doorway, outside looking in. They quickly join in, singing the song as if it were a spiritual, solemn anthem, and we quickly learn that this is some sort of evening entertainment for a group of well dressed (tuxes and crinoline) white men and women. One woman, Bing’s love-interest, played by gorgeous, hyper-sensitive, and brooding Joan Bennet, is shown in profile, a sentimentalized vision of melancholy until the other party-goers urge Bing to join in the singing. At first, he demurs — “Why spoil it?” he says, but soon he does sing. Everyone is transfixed, spellbound — much in the way I was in Chatlins. The Black cast disappears as if the doors had been shut, and only an older kerchiefed house servant momentarily looks down approvingly from a balcony, presumably experiencing her own version of the Stendhal Syndrome. What’s interesting about Crosby’s version of the song is that he sings it with his customary intimate jazzy phrasing, avoiding the deep and loud vaudeville style usually associated with minstrel shows. Moreover, the Crosby character is a northern Quaker who gets into trouble when he refuses to take part in a duel. Even though issues of race are not treated directly in the film, he clearly comes from an abolitionist background — as did Stephen Foster, who supported the North during the Civil War and was known to support the abolitionist cause. Moreover, the song itself, with its questionable lyrics and use of artificially stereotypical slave dialect (as in “Oh, darkeys, how my heart grows weary,/Far from de old folks at home”), is clearly about the hardship, sadness, and despair of families separated by slave traders and plantation owners.

I’m not sure I would have unearthed this memory and its subsequent excavations if it weren’t for recent revelations about the enduring prevalence of blackface and minstrelsy in 21st century America. Growing up in Philadelphia, I don’t remember encountering either form of blatant racism. Never during Halloween trick or treating, never at parties or at school or community activities. I wasn’t aware of the New Years Day Mummers Parade’s history of blackface string-bands and comic brigades strutting down Broad Street. These displays had been banned in the early 1960s, but never completely halted, the most recent iteration occurring this year. I should have known. In this essay, my brief foray into nuance and paradox doesn’t alter the facts of racism I did encounter in the marionette minstrel show or the Bing Crosby movie. But surely for me, the department store show was, like the song for Louise Gluck, instrumental in awakening an important aesthetic awareness, a profound sense of art as both refuge and transport, in spite of (and not because of) its intractable bigotry.•