I made a kite once for an oversized Australian sound engineer. White paper on crossed dowels, with a painting of a kangaroo and a raccoon dancing under the Big Dipper (Northern hemisphere) and the Southern Cross (Southern hemisphere). Inter-hemispherical friendship and harmony! That was the message of the kite.

I still miss that kite.

The Southern Cross is a very subtle constellation. It’s only 4 stars in a diamond shape. Still, it is beautiful. And for Northern hemisphere dwellers like me, it’s rare and far away, so I treasure the memory of seeing those stars, the Southern Cross, so far away from home.

Except that in the US the Southern Cross also means the Confederate Flag, which to this overeducated Northern Jew whitey race-traitor means KKK and white supremacy, organized or more casual. It’s a stereotype, and it’s also simultaneously a social fact. The Confederate flag has meaning because of how the symbol is used: the social life of an object, if you will.

Who loves the Confederate flag? Millions of people, including a lot of apolitical rock and roll fans. The Confederate flag’s not just for country music, as many of us would like to think. A brief history of rock-related acts using Confederate flag-imagery includes Lynyrd Skynyrd, Tom Petty, Ted Nugent and Kid Rock. Billy Idol in the ‘80s used a Confederate flag guitar (though he was New Wave, he came out of the ‘70s punk scene that used the swastika as a way to freak out the squares, because, as the argument goes, we can all just divorce symbols of hatred from their cultural and historical baggage, man). Rockabilly kids. Whether Southern, Northern, or otherwise, or outside the US, for a lot of people the Confederate flag isn’t about Ole Miss or the Dukes of Hazzard. It’s rock and roll.

I hate Lynyrd Skynyrd. Tom Petty freaked me out in his mid-80s guise as the Caterpillar in the Alice in Wonderland-themed video for “Don’t Come Round Here No More.” I don’t give a shit about the Ted Nugent or whoever else. I would hate Kid Rock, but he’s a cartoon and at least supports the troops in some ways that seem to generate money and other needed supplies for the kids the US sends overseas to die for oil and fat cats’ bank accounts. Billy Idol’s a joke, and rockabilly kids do have a sweet aesthetic, but who has time to recreate a long-gone America that never should have existed? I hate it all.

But it’s immaterial. Even the stupidest, most transparently craven attempt to wrest a buck out of some sucker’s hand matters, because culture matters. Like Raymond Williams wrote, culture is everyday. Culture is ordinary. And it is a uniquely potent vehicle for transmitting messages about power and value, at least in part because of its deniability: “You take rock album cover art seriously? Lighten up already, nerdlinger.” 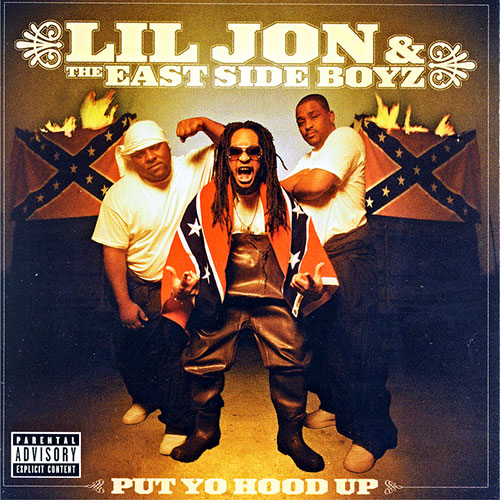 Kanye, Ludacris, and Andre 3000 all used the Confederate flag in photos, although most people didn’t read those images as an embrace.

In 2013, LL Cool J teamed up with Brad Paisley to defend the flag in an insipid plea for open-mindedness. “Accidental Racist” makes a lot of false equivalencies, from the Confederate flag vs. do-rag, iron chains of slavery vs. gold necklaces. LL and Brad co-wrote this thing, which basically argues that we as Americans are all so stupid we don’t understand that sometimes a universally-understood symbol of hate and terror is just a way “meant to say I’m a Skynyrd fan.”

Which is damning enough, frankly. Because Lynyrd Skynyrd’s not Cool.

But again: it’s immaterial. This is not a matter of taste, of class, of opinions. If the flag didn’t have Deep Existential and Symbolic Meaning, it wouldn’t have been flying at full-mast the other day.

Why is the mass murder at an historically black church in Charleston, S.C., not considered terrorism? People around the Internet are asking this question. Most people argue it shows the differential way mass media treats white murderers as exceptional and atypical individuals, not members of dangerous groups. But that’s not really the reason. The reason why the mass murder at an historically black church in Charleston, S.C., is not considered terrorism is because this was an act in defense of white supremacy. That means it’s business as usual for these United States. It doesn’t mean that the government condones this act, nor that all Americans (#NotAllAmericans!) support murder. It means that the larger rhetoric of the U.S. is one that elevates whiteness as normal, natural, and to be defended. Those rhetorical tools we use to separate ourselves from uncomfortable symbols and meanings? They don’t work. We’re all in it together. Rock fans, hip hop fans, country fans, Northerners, Southerners, and more.

Like I said, I miss that homemade kite, with a Southern Cross of stars. I want to argue It’s a different Southern Cross! Because duh. The way social and historical context work, though, means that even if you’ve never heard of the constellation, and even if you don’t call the Conferedate flag that, it’s always already there.

The fact that it took a mass murder in a church in Charleston, SC, to get Wal-Mart, Amazon, Sears, and eBay to stop selling Confederate-flag merchandise is nothing short of shame, by which I mean deep Goffmanian stigma marking the spoiled identity of white America.

There’s no winner here, and no escape. White supremacy manufactures consent. It’s not about North vs. South, or rock vs. country vs. rap. It’s not a matter of taste or difference. In symbols — flags, album covers, T-shirts, bumper stickers, we see the machinery of the US at work. We built it, this machine. •