During a protracted period on the couch with a stomach virus a few months ago, I found the only thing I could keep down was HGTV. The voices on these shows were so soothing and nonjudgmental, and the hardwood floors, finished cabinetry, coordinated backsplash, and designer-rustic farm sinks so aesthetically pleasing that I was lulled back to health before I knew it. I came away with a deep appreciation for how this programming functions in our culture.

To begin, it is useful to observe what these shows are not about. They are not about self-improvement. To be sure, they focus on improvement — i.e. on the production of a nicer envelope for living. But no effort is made to improve the health, wealth, or moral fiber of the clients being served. This, quite frankly, is a relief. We have passed through the cultural interlude in which we were bullied relentlessly about eating better, exercising more, and brightening up our personalities (not to mention our teeth). This, I believe, has made us acutely aware of how lazy and inherently imperfect we are, creating anxiety and anger as the eventual byproduct. Our current political situation can be understood as a backlash against that wearisome imperative that we be better than what we are inclined to be.

Unlike early shows on TLC (What Not to Wear) and Bravo (Queer Eye for the Straight Guy), which focused on physical make-overs, HGTV has skyrocketed to popularity by focusing on home improvement.  The distinction is important. Our homes can be gussied up with a little expenditure and elbow grease, but they don’t require that we change how we present ourselves to the world. It makes sense, then, that sprucing up the places where we live can lift our spirits without challenging our essential worth or requiring ongoing exertion. 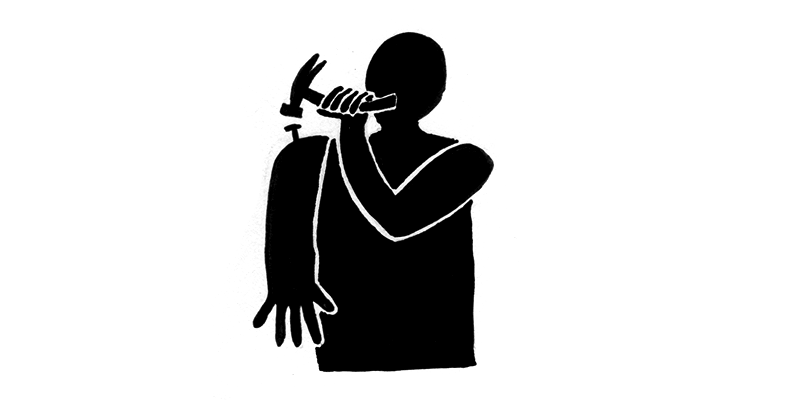 HGTV caters to a variety of income levels (or, as the phrase goes, “price points”). I say this recognizing that we are not dealing with indigence or even low-income here. Most of the clients on these shows have anywhere from a few hundred thousand to a few million to spend. Still, the idea that a budget is involved is heartening. One person in the couple is generally keen to abide by the budget, while the other is not — and it’s always interesting to see who prevails. Overall, the emphasis is not on luxury but on upgrade and taste. The phrase “putting your house in order” is a metaphor for getting your priorities straight. HGTV turns that phrase back to its literal meaning.

The flagship show, House Hunters, is perhaps the least like the others in that it focuses on people looking for homes as opposed to the professionals involved in finding or renovating them. This obviously has its appeal, but the other programs on the HGTV roster seem to me to reflect an evolution. They focus not on the clients but on the home improvers who act as their surrogates. This supports my original idea that people are lazy — they want to sit back and let others do the work. The home improvers, genetically predisposed to be more energetic than the rest of us, are happy to oblige. It helps, moreover, that they tend to work in pairs, and, like a buff and handy Abbott and Costello, bring a comedy-team patter to the business of hammering nails and arranging throw pillows.

Here is a list of the duos who seem to be the premiere emissaries of the HGTV ethos: The Fixer Upper’s Chip and Joanna (a fun-loving but industrious couple, parents of four young children who somehow do not get in the way of their relentless pursuit of shiplap), Property Brothers’s Drew and Jonathan (handsome twin brothers who walk a fine line between the creepily perfect and the utterly adorable), Good Bones’s Karen and Mina (a red-haired mother-daughter team in which the mother is pleasantly bossed around by the daughter), and Love it or List It’s Hilary and David (a dorky pair who exist in a congenial, non-sexual relationship). These duos are the ultimate service people and give us hope that, despite our experiences with no-show plumbers and surly washing-machine repairmen, there are people out there who will care about our bathrooms and laundry rooms as much as we do.

Each duo is defined in complementary terms, which suggests that difference can be a good thing and can lead to entertaining banter rather than vituperative name-calling. I should note that ever since I learned that Tarek cheated on Christina in the Flip or Flop franchise, I have been less smitten with that show (though I admit to liking the suspense of wondering if Christina will bash Tarek’s thumb with a hammer). 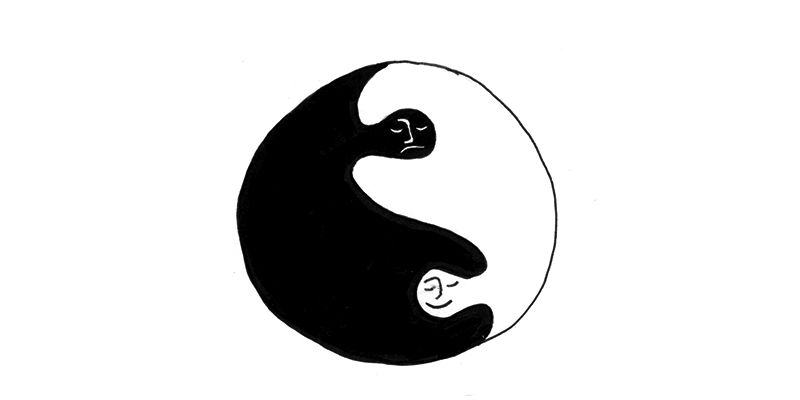 In evaluating the duos in these shows, it is clear that one partner has more authority, while the other has more charm — with each perfectly happy with his or her respective role. In the case of The Fixer Upper, the dominant figure is Joanna, who renders judgment on what needs to be done and provides the decorative touches while enduring the antics of the clownish Chip, whose physical know-how and endurance are impressive. For The Property Brothers, the division is between the real estate guy (Drew), more brushed and polished, and the design and construction guy (Jonathan), more rustic and hands-on. In Good Bones, the know-it-all daughter barrels through, granting an occasional good idea to her soft-spoken mother, a dynamic that will be familiar to any mother of a grown daughter.

Diversity has penetrated these shows mostly through the couples for whom the experts do their work. House Hunters was a trailblazer in having gay couples as regular clients for houses, thereby introducing middle America to the fact that gays too like open kitchens and hardwood floors (in case they didn’t know that this group pioneered such tastes). More recently, a Flip or Flop spin-off has introduced Ashley and Andy, a black couple renovating houses in Fort Worth, Texas. Since then, another black couple has been put on the roster — in Nashville — who boasts the added distinction of being divorced from each other but still able to get along swimmingly when it comes to taking down walls and laying kitchen tile.

For all their superficial variety, these shows are similar in structure. House Hunters pioneered the tripartite division — three being not only spiritually resonant but the magic number for commercial breaks between house visits. The other shows use variations on this structure, making sure to insert an additional commercial before the final “reveal.”

As in any make-over, the finished product is withheld until the last moment. This is followed by the requisite exclamations of “Wow!” and “Awesome!” from the grateful clients. It’s all very predictable but also very delightful. Who doesn’t like to see people made deliriously happy?

The determination to bring something to fruition within a limited time frame and prescribed budget is used to create (mild) suspense. To this end, problems must invariably crop up that make the renovators scramble: surprise asbestos in the walls, a rotting foundation, an open kitchen plan detoured by a load-supporting wall. How much will it cost? Worried expressions and melancholic sighs ensue. Will the buyers be able to afford the work; will the improvers be able to make the predetermined deadline? They always can and always do.

In the face of the gender stereotyping that informs the sexual harassment cases in the news these days, these HGTV shows provide something of an antidote. They celebrate cooperation between the sexes and fluidity with regard to gender roles. Domestic life incorporates muscle as well as aesthetic flair — tasseled curtains and crown molding hold sway alongside soil testing, zoning ordinances, and structural foundations. Women engage in demolition, and men talk about “pops of color.” One of the networks most delightful spin-offs (HGTV procreates continuously — rather like Chip and Joanna) is Property Brothers at Home: Drew’s Honeymoon House, in which the brothers renovate Drew’s new LA home with the help of his fiancée, Linda Phan. At one point, five-foot Linda is harnessed to a rope to pull down a wall; soon after, Jonathan and Drew discuss “dressing up” a room with “signature pieces.” 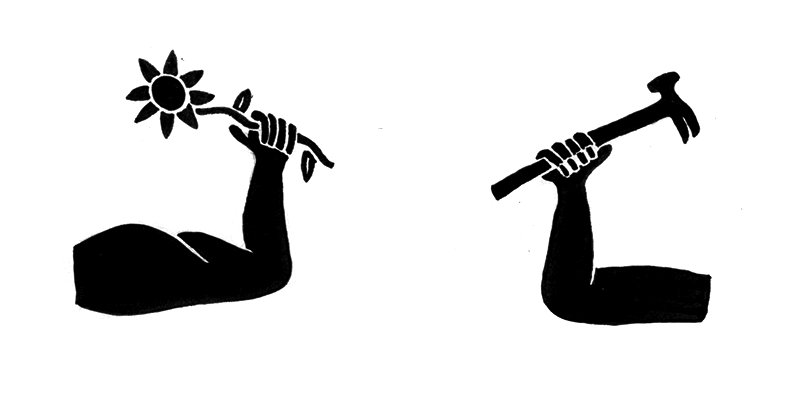 I know, of course, that there is a downside to all this. The HGTV mentality promotes the view that happiness is a function of material well-being — and we all know that this isn’t true (right?). It also encourages a certain conformity of taste. While not the boxy housing of the Soviet era — the Soviets had no sense of shiplap or backsplash — HGTV renovations favor predictable materials and looks: granite countertops, stainless steel appliances, wide-plank hardwood floors. Couples have quickly become savvy at pointing out when the requisites aren’t there: “I need my island and granite countertops,” one member of the couple (often, the male is the “passionate” baker) will say petulantly I believe that I had trouble selling my funky Victorian house because it didn’t have an open kitchen or walk-in closets.

But if these shows are dismissive of the quirky and time-worn, they nonetheless make people, who might never have thought twice about home décor, more mindful of the spaces they inhabit. There is conformity at work, but it has something of a kumbaya communality. After all, if we can agree to HGTV standards of what a nice-looking home should be, perhaps we can agree on larger things and make our way, with a renovating sledgehammer, to world peace (a “spears into pruning hooks” sort of thing).

One aspect of these shows does nag at me, however. I wonder what the spaces will look like after a year or two of occupancy. Will the couples slide back into their old, sloppy ways? Will one berate the other for failing to use placemats? What happens when the little ferns in the pottery jars wilt in the family room? When wine spills on the living room rug? When the designer bed pillows get in the way of a good night’s sleep? How fast will entropy take over?

But, really, does it matter? The idea in these HGTV shows is to impose order and uplift, if only for a fleeting point in time. We all turn to dust eventually, so why not enjoy the lighted candles around the soaking tub and forget, for a moment, the devastation of time’s sickle? •

All images created by Isabella Akhtarshenas.