In the wake of the Harvey Weinstein sexual assault scandal, on October 16, 2017, a movement swept across social media: women posting “#metoo” to acknowledge the pervasive nature of sexual harassment, assault, and rape. The movement has maintained momentum, along with the “time’s up” movement, in which women are stepping forward to point the finger at famous men. Allegations of sexual misconduct — everything from unwanted touching to rape — have been bringing down powerful men, although the President of the United States has remained immune thus far. A fraught but necessary public discussion about the injustices suffered by women within the patriarchy appears to have finally reached critical mass.

Talking about this with a female friend, I had to admit that I was embarrassed and ashamed that it took me so long to question the assumptions of my patriarchal upbringing and its treatment of women. I do not write from outside this issue. I grew up in a conservative evangelical home, and I had long since abandoned the theology of my youth before it occurred to me that maybe I should question it — it was just so convenient not to, I suppose. I grew up learning two somewhat paradoxical notions about women. First, women wield an irresistible power over men. Second, women are weak and silly creatures who cannot be trusted to recognize the truth much less speak it and need to remain under the guidance and authority of men.

My mother regarded my first serious girlfriend as a danger to my eternal soul. After a pregnancy scare, mom gave me an ultimatum: Break up with the little tramp, or she would go to the girl’s parents and tell on us for having sex. I refused; I truly loved this girl in my lusty, teenaged boy way. We went to her grandmother and told on ourselves, taking away mom’s blackmail power.

My girlfriend’s parents made her start taking the pill and spoke no more of it. From my Baptist parents’ perspective, the danger was still very real, because an unwanted pregnancy was the lesser of two hazards. Proverbs seven warns the young man not to fall into the trap of a seductive woman, lest she lead him to destruction like an “ox to slaughter.” Mom and dad staged a sort of intervention in which they team lectured me on the dangers sex with this girl posed to my soul. I was not culpable — I was in danger. In his book A Man’s Touch, Baptist preacher Charles Stanley writes that all Eve had to do to cause Adam’s fall, because he was in thrall to her sexual power, was to say, “Have a bite.”

I am not speaking only of the evil seductress. Any woman who has a body is potentially just as dangerous because her body inflames lust in men. In The Act of Marriage: The Beauty of Sexual Love, Tim and Beverly LaHaye warn women to avoid “scanty dress.” If women understood the psychic damage “their indecent exposure causes the average man,” they write, “many of them would dress more modestly.” Mr. LaHaye takes it even further in his book How to Be Happy Though Married, explaining that men are sexual aggressors by nature due to their, “constant production of sperm and seminal fluid.” He writes that the male drive for sexual satisfaction is “almost volcanic in its latent ability to erupt at the slightest provocation.” The message: Women, if you excite lust in a man and he cannot stop himself, it is not his fault; you should have been more careful.

After mom and dad pressed me to break it off with my girlfriend for the sake of my eternal soul, dad said to me, “If girls were as loose when I was young as they are now, I probably would have been in trouble too.”

This is why schools like Bob Jones University, Pensacola Christian College, and Patrick Henry College can so easily blame the women who are assaulted and not the men who assault them. Their very existence inhabiting female bodies is an indictment.

Women are not just bodies in this scheme of things, however, and this brings up the second notion I grew up learning: Women are bodies, yes, but they are also simple and silly creatures in need of men’s guidance and protection. In his article “Are You Looking at Me,” science writer Matthew Hutson notes, “In most cases, thinking of a person as a body does not lead to objectification in a literal sense, in which the person becomes an object. Rather, [the person] is dehumanized . . . becomes a sensitive beast.” 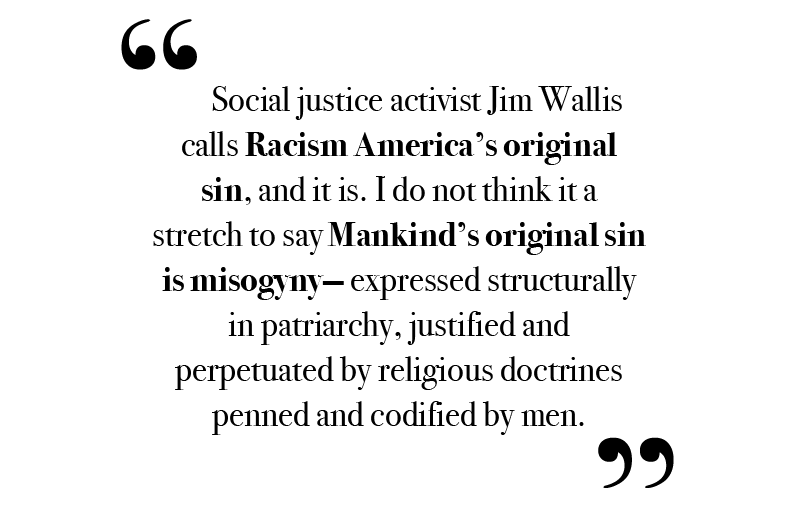 I was taught women are just that: sensitive beasts, weak creatures unable to think straight when they get emotional — a condition that causes a good amount of the world’s heartache. I heard more than one preacher claim the serpent approached Eve in the garden because he knew that she, being a woman, would be easy to fool. Adam ate understanding the dire consequences; silly Eve did not understand, and in her silliness, she ushered sin and death into the world. In her silliness, woman must be watched, controlled, kept away from important decisions.

A friend told me her father, an Evangelical minister, recently admonished her brother that he must control his wife. Men, he told her brother, “were made by God to be the lords of this earth.” He said, “Your wife needs you . . . she needs your lordship to deal with her emotions.”

It is only reasonable, then, when dealing with a silly, sensitive beast, a feeling body, to dismiss much of what she has to say. In the Bible, Paul tells Timothy that women are to “learn in silence, with all subjugation,” and “suffer not a woman to teach, or usurp authority over a man.” He instructs the Corinthians that women are to “keep silence in the churches, for it is not permitted unto them to speak . . .”

When they do speak, you do not have to believe them. Rebecca Solnit’s “Cassandra among the Creeps” deals with the silencing of women’s voices, particularly in the face of sexual violence. Solnit maintains that “credibility is such a foundational power . . . and women are so often accused of being categorically lacking in this department.” When a woman speaks up about male misconduct, “especially if it has to do with sex, the response will question not just the facts of her assertion but her capacity to speak and her right to do so.”

Freud discredited the women he interviewed when what they told him was too damning of men. Instead, he wrote off their stories as dreams born of a secret wish to be ravished. Arlen Specter, participating in the humiliation of Anita Hill, proposed that she “imagined or fantasized Judge Thomas saying the things she has charged him with.” Roy Moore called his accusers liars. The White House maintains that Trump’s accusers are liars.

Though a great divide exists between men and women on this issue, both R. Marie Griffith and Arlie Russell Hochschild have observed that white women are willing to set aside issues of sex and gender and join their men to, as Hochschild writes, “jointly focus on race and class.”

What about those of us men who believe them? Those of us who consider ourselves allies, not simply because we have wives and mothers and daughters, but because we understand this is an assault on humanity itself? What part do we play in this? No small one, I have to admit if I am honest.

I have yet to fully process the story, but Carmen Maria Machado’s “The Husband Stitch” kicked me in the chest over and over and over again as I read it. The narrator opens up a world in which the protagonist keeps hidden from her husband a deep wound, while at the same time submitting to sex with him she finds uncomfortable, even painful, simply because that’s the way it is. Her husband is oblivious to her reality, and his male selfishness, meaning no harm, is part of the problem. She muses:

All the accusations in that “and yet” point to me. I am that not-bad husband. I could be defensive, but that would be denying a deep truth in this story that I must acknowledge even as I sit gobsmacked by it.
Many men like me are asking: What is required of me in this? First, I believe I must willingly shoulder the legitimate guilt I own. Religious blogger John Pavlovitz expresses it well:

Guys, while we may not believe we have committed direct acts of violence against women (however given the statistics, this is quite likely), we have each participated in a culture of misogyny and sexism that continues to victimize and traumatize, to steal safety and generate fear, to deny humanity and to cultivate disrespect. We are fully complicit . . .

Second, I must not react defensively but own the current wave of public shame as partly mine, own the discomfort I feel as something I have earned. I am not talking about self-flagellation, but fessing up to the injury in hopes of ending the insult.

Finally, I must propose to right these wrongs, as much as it is in my power to do so. I am not entirely sure what that will look like. I know it will not be a simple matter of holding individual famous men to account, though we should definitely do that.

Social justice activist Jim Wallis calls racism America’s original sin, and it is. I do not think it a stretch to say mankind’s original sin is misogyny — expressed structurally in patriarchy, justified and perpetuated by religious doctrines penned and codified by men. To give women equal power and equal voice, can it be reformed incrementally, or, since it is the warp and weft of our culture, must we tear it down and rebuild? •
All images created by Emily Anderson.