During an undergraduate English seminar, our professor got frank with us about her multiple miscarriages. It wasn’t completely out of sorts — the seminar was centered around the body and we had spent a lot of time with the concept of madness as elucidated by Elaine Showalter in The Female Malady. After more than 10 years, I don’t remember much about that course, but I do remember our instructor’s confessional moment, what felt like at the time, an incredibly intimate detail in her life. It wasn’t the first time I had come across the concept of miscarriage. At age four, I was told I was going to be a big sister and then not long after, was told I wasn’t. But I was struck by her openness and matter-of-factness. These weren’t situations we were supposed to discuss. It felt almost indecent and out of line at the time.

As Shannon Withycombe articulates in her new book, Lost, the rhetoric around pregnancy has drastically shifted since the 19th century, becoming in the 20th, one of control, fear and anxiety, and shame. With advances in family planning — in fact, just having the concept of family planning beyond hazy methods like pulling out, rhythm, and tonics — women and the medical profession have more firmly situated themselves as active agents. Women are more capable than ever to arrange their lives around careers, taking preventative measures to determine the circumstances of birth and to nearly guarantee a “successful” pregnancy (which has typically meant not only living but able-bodied). And that’s the narrative typically provided in media texts — the mildly uncomfortable woman walking around with a perfectly round belly until a puddle of water splashes against the kitchen tiles, and she is rolled away into a hospital room where she delivers a perfect baby with wonderfully dark hair who is either awake and cooing or asleep. The pregnancy narrative has become monolithic and miscarriage as a failure or loss is part of that story. Our fears, anxieties, our shame are not subjects we typically want to broadcast and so perpetuated through our lack of sharing and silence are those feelings of loss. 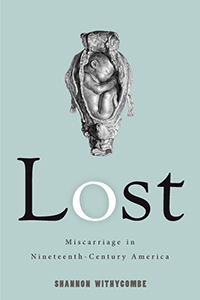 Lost: Miscarriage in the Nineteenth Century by Shannon Withycombe

The fundamental problem with monoliths is that they do not encapsulate the variety of human experience. When things go astray, not even wrong, but alternate to the main thread, we often experience anxiety or even shame. “This isn’t normal,” becomes the refrain, as opposed to a more holistic approach that the monolith does not exist — that there is no normal or standard. Our bodies are not machines (as wonderfully expounded upon by Barbara Ehrenreich in Natural Causes). With medical advances, we are taken aback when things don’t match our projected timelines and expectations. Additionally, there are the pressures put on expected mothers to have just the quaintest, Goop-iest pregnancies with precious little bumps that will go away instantly post-partum. These narratives are accentuated by celebrities who are heralded for losing baby weight in instants, social media profiles highlighting pregnancy highs, and the overall lack of conversation about the negative experiences and feelings associated with pregnancy, something Meghan O’Connell’s And Now We Have Everything expounded on last year — that pregnancies can still be unplanned, uncomfortable, and not live up to the hype.

Lost continues to blow up the narratives related to body control and pregnancy. From the archives, Withycombe is able to find letters from dozens of women living in the 19th century, who referenced pregnancy and loss to family members and friends. She found that most women who accounted for a miscarriage demonstrated a wider array of reactions — from grief to resigned to relief.

In relating the experiences of three women, Emily Fitzgerald, Annie Van Ness, and Mary Cheney, Withycombe demonstrates how their letters express their miscarriages not as losses, but as circumstances. Of something that was and then wasn’t. Withycombe reframes the discourse:

In 1875, Emily FitzGerald suffered a miscarriage. That same year, Annie Van Ness lost her first pregnancy. In 1879, Mary Cheney wrote a letter to her husband with news of the failure of her latest pregnancy . . . And yet the three sentences I wrote to open this chapter are patently false. That is not what happened in nineteenth century America. Although each woman did miscarry a pregnancy, according to their own words their experiences had nothing to do with suffering, loss or failure.

Withycombe continually provides these delightful interventions, demonstrating the ways in which our understandings have shifted, our language has shifted, and how in turn, our experiences become shaped by twists so relatively current. Birth has been kind of a thing for a while, so for Withycombe to provide multiple examples of women encountering miscarriage differently in the 19th to what we see typically in the 20th becomes quite stunning. She credits the rapidity of change to the relationship between the burgeoning medical field and patients — one with more complicated circulations of power and knowledge. Midwives were still a dominant force when it came to pregnancy and prior to the 1830s, women and families could consult domestic guides for information and best practices, as Withycombe notes by the middle of the century, the idea of women taking care of themselves would then shift to those guides instructing them to consult medical professionals.

By the middle of the century, midwives slowly began to be forced out by doctors, who privileged their pursuit of science over experience and folk knowledge. Withycombe provides a necessary and fascinating timeline of the events and writings that built upon each other to reshape the dialogue around pregnancy and miscarriage. Science, as opposed to folk practices, slowly crept its way into becoming the norm of giving birth, with doctors becoming more aggressive and active in their approach to child delivery, circulating theories regarding “normal” pregnancies, and the need for their expertise to deliver babies. But this is not a book lambasting the medical industry, as much as documenting the relatively quick process of pregnancy moving from centuries of folk and domestic practices to being outsourced to doctors and hospitals.

Throughout Lost, Withycombe outlines a comprehensive yet incredibly accessible history about the shift in the narrative. She provides detailed accounts from the letters of women, includes excerpts from medical journals, and uses the larger historical context to situate this ongoing negotiation between women and doctors to dictate the terms of what pregnancy was and wasn’t. The shift isn’t necessarily one of feeling, but one, perhaps of faith. In including this context, Withycombe provides an empowering narrative, one that reminds us that the current pregnancy and motherhood narratives are not norms, are relatively recent, and provides, in some respect, permission to be kinder to ourselves – to reframe miscarriages not as outliers, but as norms within the narrative of pregnancy in and of themselves. At 19 or 20, I didn’t realize the value of that honesty and transparency about our bodies, our anxieties, and our shame. It wasn’t until much later that I got the empowering nature of sharing. I see now, as a more emotionally informed adult, that what my instructor was doing was allowing us to 1) see her as a complex individual, one who had a life outside of the classroom and 2) contribute to the dialogue normalizing the experience, helping us to understand the body as a complex network of systems that more often than not don’t work according to plan. •