When German historian’s Jürgen Osterhammel’s The Transformation of the World was published in Germany four years ago, reviewers of the major newspapers were in complete agreement: this voluminous book of history would do more than change the way we looked at the 19th century. They saw a new kind of history at work here, not a sober historical treatise, but writing at its best, packed with facts and peppered with eye-opening insights, moving from panorama and zooming in to detail and back again. Osterhammel, a tenured professor at the University of Konstanz (next to the lake of the same name, separating Germany and Switzerland), is probably the best known of contemporary historians. The weekly Die Zeit called him “the Meryl Streep of the German humanities,” due to the number of awards he has garnered over the decades. He gave the commemorative speech at Angela Merkel’s 60th birthday last year.

Jürgen Osterhammel revised the text for the English-language edition of The Transformation of the World, translated by Patrick Camiller and published by Princeton University Press. The volume will soon be available in paperback. A very relaxed Jürgen Osterhammel reacted promptly and kindly to our enquiry to ask him a few questions about his book. We feel honored, because Osterhammel doesn’t grant many interviews. 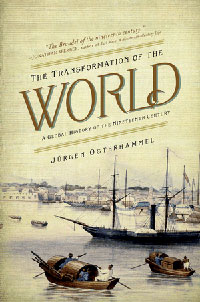 The Transformation of the World by Jürgen Osterhammel, translated by Patrick Camiller. Available now from Princeton University Press.

When did the 19th century start and when did it end?

This is hardly a matter for debate. It comprised the years from 1801 to 1900. In some cases this makes sense to the historian, more frequently it does not. We are free to play with chronology as long as we explain to our readers what we are doing.

How did you choose to play with it?

By developing specific temporalities for the various aspects of historical reality. Though interconnected, the times of, for instance, cultural and economic history are quite different.

One of the “characters” in your book is Harriet, the giant tortoise whose lifespan extended from about 1830 to 2006. Why did you select her?

She opens a chapter about the memory of the 19th century. Of course, Harriet in old age kept her thoughts to herself, but otherwise she must have been a superb authority of the 19th century. Shortly after having finished the book I saw my first giant tortoise – in Phoenix (Arizona). I must say, I was very impressed.

How did 19th-century globalism differ from the global interactions of the preceding centuries?

By a higher degree of reciprocity and circularity.

The remark you are quoting is a simple statement of fact. It is in no way meant critically. Perhaps it is even a compliment to the 19th century that it had the power to impose itself on the views of posterity.

Are there any lessons we can take from the 19th century and apply them to the 21st century?

I just did some research on the Congress of Vienna, and I am much impressed by the art of compromise evinced in a highly unstable international situation. Of course, the context then and now is entirely different, but the basic range of critical choices remains more or less the same.

The abolition of slavery is among the topics of your book. Do you think the USA could have found a way to end slavery without a Civil War?

In retrospect, I see no realistic alternative.

What’s your take on Victorianism as a cultural force of the 19th century?

I used the term mainly to identify a period when British cultural models were uniquely influential in the world. Otherwise, the concept does not make much sense beyond British culture. For example, it is deeply colored by Protestantism and therefore difficult to apply even to Continental Europe.

What do you think about the notion of American Manifest Destiny — and the ways in which America stood apart from other countries, even new ones, in its particular relationship to its progenitor and to the rest of the world — the notion that America was truly a second chance to ” begin the world again.” Did it make any difference in the 19th century?

Very much so – from the revolutionary era – when the term ”manifest destiny” had not yet been coined – to the present day.

One of the characteristics of the 19th century that you single out is the sharply increased scale of human mobility, of diasporas. While we may not be so aware of the migration currently happening within Africa, Europe faces waves of immigration from Africa and the Near East that challenge European self-understanding. What’s the position of the contemporary historian in this? Should he be more than the neutral observer?

With his professional tools, the historian is not able to observe very much. This has to be left to sociologists and demographers. As a private citizen, one takes part in debates about this burning issue.

How do think about the idea of “The end of history”? Don’t the developments since the publication of Francis Fukuyama’s influential essay prove that it’s already become history?

I never cared for this kind of misguided Hegelianism.

You are also a renowned specialist on China. Where will this country stand 50 years from now? Would you like to share an assessment?

As long as I worked on China, I concentrated on the pre-1949 period.

People who are much better experts than me have for a long time offered predictions about the future of China. 99 percent of them have either been trivial or wrong.

You write that in the field of languages English was “the biggest winner from 19th-century globalization”, at a time when literacy was for the most part a skill of the elites (except in for example Japan). Do you have any thoughts on how the importance of English will change? Will the linguistic unity of China endure?

English will continue to gain in importance. But it is unlikely to undermine the position of Chinese in China. The Chinese language will, in turn, become a major language taught in schools around the world.

You open up the field to various American, African and Asian perspectives and avoid Eurocentrism while – by necessity — relying mostly on German, English and French sources. How do you deal with this asymmetry? Where do you see the limits of your approach?

A world historian, of course, should know as many languages as possible. If one does research in the sources, one can never do without the requisite linguistic skills. However, when you work almost exclusively on the basis of recent scholarship you can go a long way with a handful of languages. My principal handicap is that I do not read Japanese, given the enormous amount of work done by Japanese historians on countries outside Japan.

Was there a point when you felt like the source material became overwhelming? How did you prevent yourself from getting lost in the material?

The danger is not of getting lost but of peddling old clichés and of missing the most significant scholarship. In many cases, recent research is superior to older publications, but not necessarily so. You need experience, luck, a good judgment for quality and many good friends and generous colleagues who point you to interesting developments in their own fields.

Is the historian as you conceive of him the true interdisciplinary intellectual working in the core discipline of the humanities? Has the separation between historian, sociologist and political scientist become obsolete?

My answer is somewhat paradoxical. On the one hand I am in favor of distinct methodological profiles of the various disciplines. I do not think that everything should get mixed up in some kind of “transdisciplinary discourse.” On the other hand, I was trained quite thoroughly as a political scientist, I have always read a lot of sociological literature, and I have never cared very much for the mainstream of historical studies in my own country.

Mainstream academic history in Germany has the reputation of being rather conservative. Do you perceive American historians to be less conservative? Can you name any American colleague(s) with a similar approach, whose work you like or find particularly inspiring?

In what sense “conservative”? Politically, methodologically? I would not share your impression about current (I am not talking about the 1950s) German historiography. Why else would young German historians be in such demand in all English-speaking countries?

How would you like to see your work followed up by future historians writing “world history”?

“World history” has a viable future only if it is translated into specific and topical research based on primary sources. If I were younger and had enough time to spend months and years in the archives, I would have written a research monograph rather than a broad synthesis – your readers should know, incidentally, that my Transformation of the World is something like an “analytical synthesis” and not a university textbook. We do not need so many comprehensive surveys. The best possible effect of my own work would be to inspire other people to go beyond it and make it obsolete. My PhD students are quite successfully working to that effect.

What are you currently working on, is there a specific question you are pursuing?

I am revising and enlarging a little German book on decolonization, written in collaboration with Jan C. Jansen of the German Historical Institute Washington, for an American edition that is likely to come out in 2016. Apart from that, I am very much interested in the global aspects of “classical” music.

Do you have a recommendation for a young historian who is just starting out in the field?

Don’t be afraid to miss out on the latest ”turn” and fashion. •