This is one weird book — but in a good way. In fact, in a wonderful way. The author, José Eduardo Agualusa, a much-praised Angolan writer, has published 24 books of short and long fiction and poetry, including one young adult novel. Five of these books have been translated into English by Daniel Hahn. Agualusa has won several heavyweight grants and two significant awards, the RTP Great Literary Prize in 1997 and the Independent Foreign Fiction Prize in 2007. He is the first African writer to receive the latter award since it began in 1990. From his website I learned that his books have been translated into more than 25 languages. I might mention that his website is in English, Portuguese, French, and German.

Angola was for some time under Portuguese rule. The narrative here is primarily of a woman named Ludovica Fernandes Mano, known as Ludo, who lived with her sister and brother-in-law until they moved away. She no longer hears from them. Always cautious and somewhat reclusive, Ludo decides, the day before Angola achieves independence, to build a brick wall that will separate her apartment from others: no one will even know she is there. At first, we might think that she is agoraphobic but near the end of the book we will learn there is another reason for her fears. Well, really we learn this earlier but the reader doesn’t know what to make of it. In other words, we are prepared for everything and still surprised, and that is a masterful trick. (One chapter is titled “The Subtle Architecture of Chance,” which could serve as a description of or guideline to Agualusa’s method of construction.) Independence is followed by Civil War, which lasts for 27 years. She lives in the apartment for 30 years, alone, sometimes catching a pigeon for dinner and constantly writing her story on the walls that surround her, and in notebooks. To keep warm, she burns everything in the apartment, including “thousands of books.” At one point she tells us “I realize I have transformed the entire apartment into a huge book. After burning the library, after I have died, all that remains will be my voice. In this house all the walls have my mouth.” She has a dog named Phantom. She tells us that she does not believe in either God or man. She does believe in Phantom (and that is a faith that makes sense to me). A seven-year-old thief named Sabalu turns up in her apartment and he is smart enough to understand that he needs a grandmother more than the bully who sends him out to steal. He and Ludo become great friends. 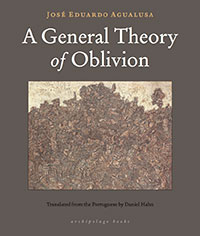 I imagine the revolution and the war are familiar to many people, especially the Portuguese and the Angolan, but to an American who never heard of them, they seem stranger than any account of WWII or the American Civil War. But perhaps this is an illusion, created by Agualusa’s light and inventive hand.

It would be difficult to summarize the entire book, because it operates on magical realism or something close to it — say, an air of magical realism — some scenes slapstick and others resembling fairytales, but at any given point something interesting is happening. Often that “something” is hilarious, but not always; sometimes it’s monstrous or sad, and sometimes it’s philosophical. A General Theory of Oblivion is a play on the General Theory of Relativity, even down to all the relatives of one person or another that show up. As for philosophy, Agualusa supplies us with interesting nuggets of thought:

“If I still had the space, charcoal, and available walls, I could compose a great work about forgetting: a general history of oblivion.”

“I sink into my own dreams. One might perhaps call this dying.”

“My mom used to say that the dead suffer from amnesia. They suffer even more from the poor memories of the living.”

Someone informs us that “everything’s always disappearing in this country.”

“Fire a bullet in the air and it will soon be joined by dozens of others.”

At one point, the author — which is either Agualusa or Ludo or possibly both — lets us know about an event “that happened many years later,” then adds, “We will get there.”

The book is conscious of itself, which is to say that the author is always aware that he is writing the book. He is his own muse. And therefore it is to some degree a book about books and writing and reading. I cannot imagine any reader not feeling rejuvenated and enlarged by A General Theory of Oblivion, with its widely varying characters, its ingenious settings, and its descriptions of political machination.

I cannot comment on the translation as I know no Portuguese, but I feel confident that it is a good translation because it is so enjoyable. There are two or three typos, at least in my e-book, and there is one line that, in my opinion, misfires: Agualusa refers to Sharon Stone of the film Basic Instinct. This reference jolts, and takes us far, far away from magical realism. To an American, Sharon Stone seems too real to be magical in any way. But maybe in Angola she is indeed magical. •