“Well, what does sex mean to you?” he asked. I laughed. Kyle repeated the question, “Seriously,” he said.

We were young and 20, saddled up next to each other in my twin bed. The metallic frame chirped as he propped up on his elbow and stared at me. I stared at my ceiling, the textured drywall, the swirls in pale green. My bedroom in Pittsburgh was different from my bedroom at home where my mother and I had painted the walls a bluish green, sycamore.

“You’re tense,” Kyle said and then began typing his coarse fingers along my forearm. When I took his hand in mine and guided him to softer longer strokes, he pressed harder.

It was only our second date but I felt as if I were always playacting with Kyle, like I had to adhere to a script. In the past, when I’d told people that I had never had sex before (not for religious reasons, just because), it was never a big deal. But Kyle seemed to think that it was, which was why we had stopped. It made me nervous. I had sprung it on him; that much was true. Surely, I owed him that.

Kyle recoiled. He made a sound-face-sigh. His breath nagged against my neck and I almost offered him a piece of gum, but I didn’t want to offend him. Everything about him was so outrageous already: his tongue, his right pant pocket, his vocabulary.

“What do you mean by that?” he asked.

What I really wanted was for him to say something about the map hanging on my wall, the one I’d fashioned out of many. I wanted to have the chance to impress him with how I had taken a scissor to all of the leftover maps I’d carted back after studying abroad in Europe. They were collaged together, push-pinned to a square cork board and affixed above my desk. 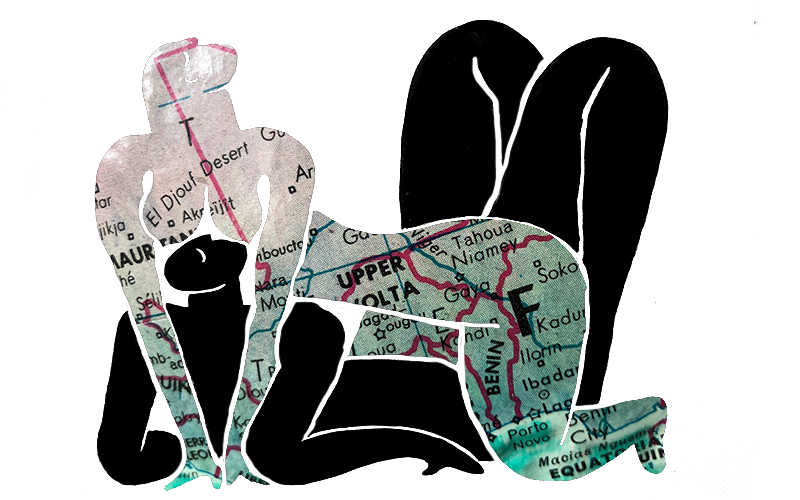 He stopped rubbing my forearm and spooned his arm over my stomach, combing my hair back with his free hand. For someone who’d confessed to a fair number of not-so-good relationships/hookups, his touch was clumsy, searching. I looked at his hands. His right thumb stuck out awkwardly. It was a souvenir from a high school football injury that he had never taken care of and now was forced to carry.

Kyle talked for a while. I listened in splits and glanced back at the map. The command strips were peeling off the upper-half so it tilted over my desk, resembling a wave’s barreled break. If I didn’t take the whole thing down soon and reposition it then parts of the map would rip.

It made me think of that famous painting, the Great Wave off Kanagawa. A giant wave lurches over Mount Fuji and two fishing boats. If there were a sequel to the painting it would probably depict only water, the mountain and the fisherman swallowed up and drowned below. I loved the painting for its inevitability and its beauty. In an art history class I took abroad, we’d studied modern variations of it: printed on advertisements, tapestries, silkscreen t-shirts, and tote bags. In pretty much the same vein, I thought my map was the most beautiful that it had ever been because it was about to fall and I would probably just let it.

He stared at me for a moment and smirked, “Quentin Tarantino.”

“Tarantino?” What was it with men and loving every Tarantino film ever made? Was it the violence, the blood, the drama, more blood and violence? “He’s not really in my league of favorites but I’m a fan of Pulp Fiction,” I said, though I’d only seen the first half of the movie.

“I’m kidding about Tarantino. I was talking about us. I knew you weren’t listening,” he said. I nodded and looked away, feeling a little guilty, but mostly apathetic. 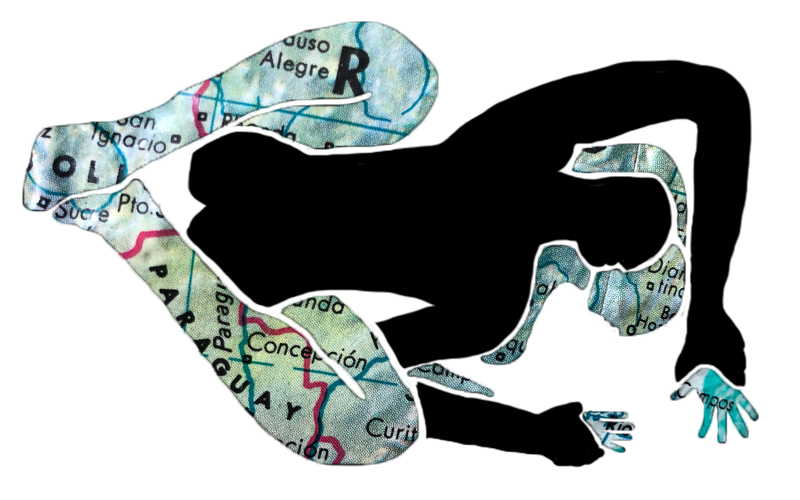 A former tenant had left behind this psychedelic poster on my bedroom door, which I had naturally kept. The backdrop was hypnotic swirls and the text read in bold rainbow letters: Have You Ever Been Experienced? I always thought it meant drugs or sex. I looked it over now and thought it meant something entirely different but I didn’t know what it was.

“Come on, I’m trying to communicate clearly here. I want to listen to you,” Kyle whispered. He wanted to listen to me. That meant something.

I wanted him to leave. I brushed my hand along his cheek. Kyle looked vaguely similar to my roommate’s boyfriend, the one I didn’t care for. Except his hair was cropped shorter, buzzed along the sides. His skin was pockmarked, acne scarred, but his eyes were really blue and set deep.

“I was in a long-term relationship so I think that this is a conversation we should be having,” he ventured.

I knew all about it. His ex-girlfriend and I were Facebook friends. We were sopranos in the women’s choir together during my freshman and sophomore year. She used to sing off-key and quite a few notches louder than everyone else. I liked her though. She had a lot of Instagram and Twitter followers — so many, many likes. And she was so nice that it was hard to not hate her for being so nice. That nice. It raised a lot of questions for me about Kyle.

“What does sex mean to you, Kyle?” I put an extra emphasis on his name, sang it out: Kyle.

He dusted his mouth along my clavicle and moved north up to my ear, “I asked you first,” he pinched my nose. It made me feel small, child-like.

“I’m going to put some clothes on if that’s all right,” I shed his arm from my stomach and stood.

“Sure, if you’re uncomfortable being naked.”

It was the cruelest kind of joke, if it were meant as a joke. Kyle claimed to be a feminist, a liberal, a champion of women. For the most part, our senses of humor lined up. We had a few bits going about my hatred for pillows and the hierarchy of grocery stores from the South Side to East Liberty. There were moments when I had the sense that he really got me.

He said it again. Louder this time, unsure that I’d heard him, “if you’re uncomfortable being naked.”

“I’m not. I’m just cold,” I said. Of course I was uncomfortable but he shouldn’t get to tell me that. I hated that there was no right word for what I felt. This was not assault. This was not abuse. This was just something I wanted to run from but couldn’t say no to. This was nothing and I was nearly ready to cry over it.

“Okay,” he replied and proceeded to watch me dress.

I have the kind of body that I think would have made for a mostly fine Renaissance portrait. My slight paunch masquerades as invisible in certain clothes. My breasts sag a little. My hips have cellulite. I am okay with all of this. Kyle was okay with this too. He’d told me so deliberately. I sucked in my stomach. I slipped on a pit-stained t-shirt and sweats. 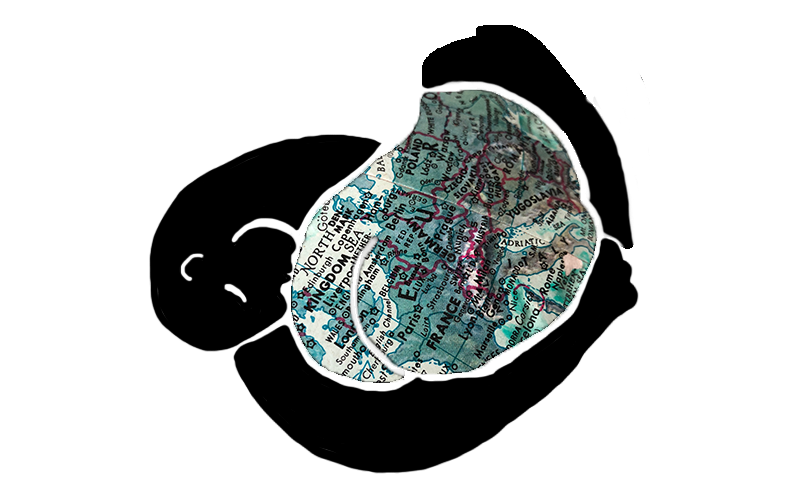 It would have been a good time for him to compliment the map. Did he notice that I’d placed a scrap of Buda in the upper left corner and a scrap of Pest in the bottom right corner, like an ode to the city divided? I had placed a sliver of the Danube River in the center to separate the two halves. A magazine cutout of a cruise ship also connected the Tiber River to the Danube.

I gave up and pointed to the map: “I made this.”

I was aware how immature I was being about everything, how me calling attention to my map was very elementary school-show-and-tell-esque.

“You can look at it closer, if you want.”

I decided to tell Kyle what I thought he wanted to hear to see if maybe then he would leave. I explained about not wanting a real commitment and my theories on how sex could mean “not much” with one person and “much” with another. I always know what people want me to tell them. I am always told that I would be a great social worker or a therapist.

“Basically, I’m flexible,” I concluded. I kicked my leg in the air as proof.

“I can see that,” he relaxed back onto the bed and covered himself with my faded tie-dye duvet, “let me tell you, most sex is bad sex. And hey, whatever it was that happened just now — an attempt, we’ll call it that — it was definitely not the worst. Rest assured.”

I pretended to be flattered though I wasn’t. He pulled me next to him. Up close, Kyle smelled like a whisper of stale high school cologne and fruit. Cranberries maybe.

I wondered about people who liked to be held in this way.

“I had really bad sex over the summer,” he said. 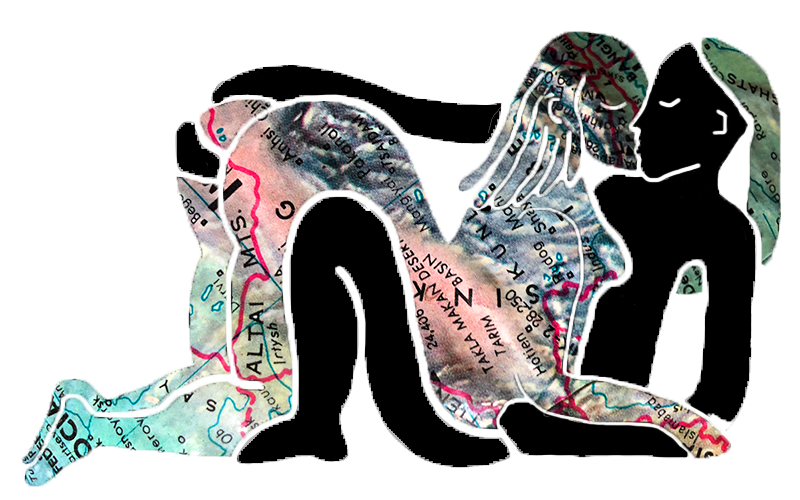 I kind of liked the phrase “don’t drink the Jesus juice.” But coming from his lips it sounded cheap, soft-shell. I tried my best to relate anyway. “I’m Jewish,” I said, “I haven’t been in a synagogue to worship in years.” This was more a truth of circumstance than a reflection of my beliefs. I still drank the “Jewish Juice” (I guess in my case that would be Manischewitz).

He told me more about his mother and his escapades. His first girlfriend and his second and his third. When he asked me personal questions back, I deflected. I needed intimacy to be reeled out of me with tools. After a while, neither of us spoke.

I eventually broke the lull with a cliché. I asked Kyle if he could go anywhere in the world, all expenses paid, where would it be?

“Maybe somewhere in Eastern Europe. I find the intersection between architecture and history there to be quite interesting,” he said and it sounded rehearsed to me.

“Not much to tell. I’ve never been out of the country but my ancestors are from there. Ireland and Scotland too. Some German, Scandinavian . . . ”

He told me that he didn’t know.

When he finally left around 11, Kyle kissed me goodbye at the door. It wasn’t as eager or unpleasant as before and he asked me to see a movie that I’d been itching to see, which was nice. I felt a whiff of longing that soon departed once I returned to my room. There, I traced my finger along the great wave of my map swelling off the pale-green painted wall. I traced it in between push pins along the terrains and destinations and streets all numbered, and I wanted to go back. •