I never knew Eric, he was always Sam’s friend, but like many people in our city, I knew who he was. Riding a bicycle down Langalibalele Street, heading towards the city center of Pietermaritzburg, it was hard to miss his double bed jammed into the double doorway of the old and abandoned St. Anne’s hospital. It wasn’t just a double bed in width, but in height, with two bases and two mattresses, giving the impression that this was how the princess and her pea would live, if she were homeless.

Sam first noticed the hospital, before he noticed Eric, and he loved it, with its tangled garden and hanging shutters and star-cracked windows. A few meters from Eric’s bed, an embroidered heart flapped in the wind, given as a red get-well gift, now grey. Behind his bed, a chain padlocked the double doors. I pictured the floors shiny, disinfected, the corridors bustling with soft-shoed nurses one day, and the next day superintendent pulling the double doors to, winding the chain, clicking the lock, saying, “Well, that’s all folks. Thanks for everything.”

And then, who knows when and who knows from where, Eric moved in. He assembled his bed, he hung his facecloth from the brass door handles, and he began to sweep. The two by three-meter pavement in front of his doorway became his veranda. It was now private property, and he would keep it pristine. 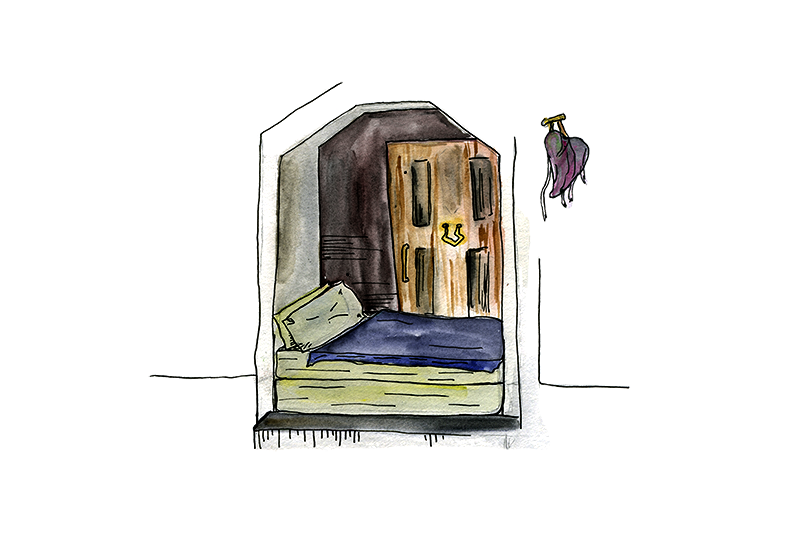 It wasn’t long before Sam began to notice not just the hospital, but Eric too. He often rode that route for errands and on return would tell me about Eric. Some days he was lying on his bed, legs spread, pillows fluffed, one arm behind his head, reading. Other days he was shouting, shaking his fists at the man on the street who had dropped a chip packet on his porch or at the man in his mind who had dropped all the balls he was juggling. One day he was smiling at the heavens, arms raised and swaying like a Southern Baptist choir; the next day he was growling at the Angels and Demons to come down and face him like a man.

The only other place Sam had ever seen Eric was heading down Chief Albert Luthuli Drive, through the former white suburbs, en route to a protected tributary of the Msunduzi River. Once, while we still lived in these suburbs, Sam apprehended Eric. We were part of the neighborhood watch and had to report suspicious activity, which usually meant saying if we saw any BM’s (text speak for suspicious black males). Every day at the same time, Eric hurried down our road with a black duffel bag, looking behind him as he walked. One day, Sam rode next to him and asked what was in his bag, and what he was doing, and why he was doing it in our nice white suburb.

In one hand, Eric held his wet underpants, in the other a bar of green Sunlight Soap, and as Sam questioned him he carried on hurrying, carried on looking behind. Each day he would walk from his double bed in the city to the river in the suburbs to wash his clothes. Then, while they lay on the rocks to dry, he would scrub his entire body, lathering and splashing, even in winter. The only time Eric ever asked for anything was when he ran out of Sunlight Soap to wash his clothes. He rang on our doorbell, apologetic. He wanted to buy soap but was short some coins. We offered a bottle of Super-Concentrated Bio-Washing Liquid but he, disappointed we had no proper soap, insisted on just one squeeze.

It was only after we moved into the city center, onto Eric’s street, that Sam connected the river-washing-Eric to the double-bed-Eric and stopped to introduce himself. Eric was reading a black Bible, open at the Old Testament book of Leviticus, and as Sam moved to shake hands he saw large parts of the text crossed out in black pen. When Sam asked why he had done this, Eric beat the book and said, “This is God’s word, but these parts are wrong.” It was an English Bible, and the parts crossed out were full of complicated words.

After this meeting, Sam often stopped to speak with Eric. Sometimes he would interrupt their conversation to pick up leaves that had fallen and marred the clean surface of his porch. Sometimes he would end their discussion mid-sentence, turn his back, and sweep. He was always cleaning. One day, at the time Eric usually washed in the Msunduzi, Sam found him in bed. He’d heard a group of men wanted to steal his home, and he was guarding it. The washing could wait. He held a broom in one hand and an iron rod in the other.

Other days, Eric was calm and full of stories. He’d grown up with his parents in a local township. At some point, whilst living at home, he’d had an accident. It wasn’t clear what type, but the Road Accident Fund had paid him R80000. “I had lots of friends then,” Eric said. “I’d give this one R50, and that one R50. Then it was all gone. I had R100 left, and I had to leave.” We never understood if the accident had made him crazy and his family had asked him to leave, or if his family had asked him to leave because he’d run out of money. Either way, he now had no money and no family.

Besides his ostentatious bed and his obsessive cleanliness and his distressing relationship with God, this was what set Eric apart. He was all alone. At night, our city streets are full of homeless people. As the sun goes down, they gather up their folded homes — layers of cardboard boxes and old duvets — and then they find their gang. Sometimes the gang is a nuclear family, sometimes it’s all men; some gangs are mixed through with women, and some look like adolescent boys who’ve been booted by their mums for the night. They sleep by the police station and, after a few nights of free love, usually go home. But everyone sleeps in groups. You need defenders on the street, and defenders are numbers, and Eric had none.

I once saw a lone chicken in the city center. I looked up as it was running across four lanes of traffic. It had come from an alley guarded by a gate and, after looking left and right, had panicked. Now within arms reach, the chicken eyed me sideways. I was sitting on the only patch of grass on the block, and it was wondering if we could share. Dirty-white and red-eyed, its neck was bald as though someone had tried to wring it and only wrung feathers. “Oh Chicken,” I said, “this is not the place for you. You cannot survive on your own here. If the cars don’t get you, the diseases will; if the diseases don’t get you, the people will.” The chicken lowered its naked neck and pecked. 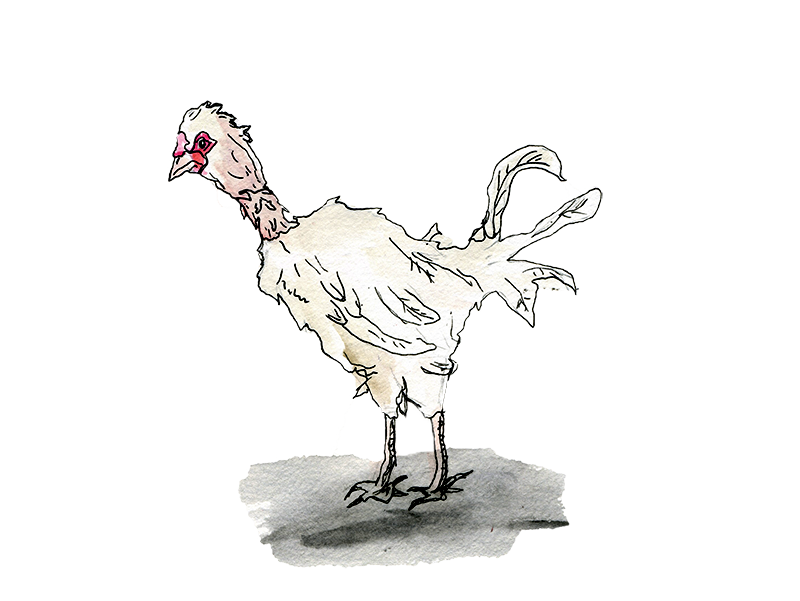 In my two years of living in this city, I’ve seen two other people sleep alone on these streets. The one was Itchy Man. He walked with wide apart legs so his sores wouldn’t touch. During the day, he sat and scratched, and passersby would skirt him. Sometimes, when he’d had it with scratching, he’d unzip his pants and pull wide his underpants and, after inspection, lean in deep, pulling out something only he could see, holding it up to the light, clasped between finger and thumb, as though it was suddenly crucial it be identified. Men would look twice, ladies would look the other way. And then one day Itchy Man was gone.

The other was a lady. She sat outside a parking lot by day, back upright, legs stretched before her, covered with a blanket from Lesotho. She would smile as we passed, greeting in Zulu, and then at our defenseless backs she’d fling a long line of educated, angry English. I often wondered at the stories of these street people. Sometimes they were told by the plastic milk bottles, half filled with poster glue, sucked and discarded, or the smell of cheap white wine. When I mentioned this lady to a Zulu friend, he said it was witchcraft, for sure. “You’ll find she was rich, clever, married, and then her husband paid a sangoma to put a spell on her, and now here she is, on the streets, and mad, with very good English.” Whatever her story, she was alone, and then she was also gone.

I knew that the chicken’s days were numbered, but Eric went first. Sam knew him for two years, and his name in our home became triple barrel: Sam’s-friend-Eric. Then one Saturday, walking to the top of Langalibalele, I noticed Eric’s mattresses were gone. The base was there, and through the springs I could see traces of his life — a torn page from the Bible, a flat shaving of green soap. I thought perhaps he was airing his mattress somewhere in the sun and reminded myself to do the same when I got home.

But the next day, walking back from sport, we saw the front garden of the hospital had been cleared — weeded, mown, black-bagged.

It cheered us. This city is full of greasy, flaking, once-lovely buildings. But someone had seen the potential of this block and was willing to halt the decay; to turn it into a government office or a students’ residency or even a music school.

And then a few days later, Sam rode past the front of Eric’s home and it was empty. No mattresses, no bases, no fragments of a life left flapping. Perhaps someone had bought the building and was serious about restoring its beauty, turning it into a real home, and Eric was a smudge on the plans.

That was the last we saw or heard of Eric. We could not imagine how we would begin to trace him, or to find out what happened.

A few days ago, I read a story in the newspaper about a ten-year-old girl whose village in Congo was attacked. In the crossfire, she was separated from her mother and father, and was hidden in the bushes by a group of villagers. She wanted to go back to find her parents — the dad who had caught fresh fish for her, the mom who had made her maize porridge — but the group said it was not safe. When night came, the village was level and smoking, and the girl and her group started walking. They walked 2000 kilometers until they arrived in Pietermaritzburg. One of the village ladies, who had escorted the girl as they walked, left her in the parking lot of a shopping center, saying she’d be right back. It got dark, and the girl was hungry and tired. A man walked past and, in Swahili, asked what she was doing. She said she was waiting for her group, and he, being from Burundi, recognized her story, and invited her home to live with his family.

I know this girl; I have for three years. I see her once a week, and she is friends with my children. She is in a good school now, she is in a loving home, and until today I never knew she might still have parents in the Congo. How would they ever begin to find her? How would she ever begin to find them? Why has no one ever begun?

Four months have passed since Eric disappeared. The shutters at the old and abandoned Saint Anne’s hospital are still hanging, the weeds have grown back, and the two by three-meter section of pavement that used to be so clean is littered now, filled with the flapping of empty packets, smeared with the desperate stains of our city. •