“My characters are galley slaves,” Vladimir Nabokov bragged in the pages of Strong Opinions. He was railing against the notion that characters in novels “take on a life of their own” for their creators, authors often unaware of what that person on the page may do next. Nabokov was having none of it.

This is because he was an egotist. Each of the figures in Nabokov’s books is a separate and slightly distorted mirror of Nabokov. Humbert Humbert is VN as sociopath, Pnin is VN but clueless, John Shade is Nabokov the great poet. Ada and Look at the Harlequins tell no stories and hold no people in them: they’re merely fountains of solipsism designed to soak the reader in Nabokov’s self-regard — no extra charge for the big words and little girls. I’m not sure whether he could have created a “believable” character unlike himself even if he’d wanted to. But the spirit was not willing.

Take a Nabokov novel, say the anti-totalitarian fantasia Bend Sinister, remove residual sentimentality, add French theory and blend. Depending on your mixture, you can make either a Don DeLillo novel or a Thomas Pynchon novel (add more jokes for Pynchon, and prepare enough for 600 pages).

In the 1970s such writers would have been called “systems novelists,” or authors more concerned with how various man-made systems interrelate than with the individuals inside those systems. In Pynchon’s Gravity’s Rainbow, those systems were industrial warfare, the structure of fairy tales, and the patterns of modernity. In Nabakov’s Lolita, the system is language itself.

In DeLillo’s novels such systems have always to do with cults (religious, revolutionary, both) and technology. As with his predecessors, there is little resembling character or plot in the way the 19th century understood it. His latest, for example, is a hall of mirrors whose inhabitants are more than a little glassy-eyed. 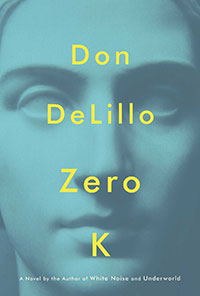 The action of Zero K, such as it is, takes place mostly in The Convergence, an elaborate center for cryonic preservation located somewhere near the impact debris of the Chelyabinsk meteor, possibly in northern Kazakhstan. The exact location of the site is kept deliberately vague by its funders, the foremost of whom is Ross Lockhart, a “master market strategist, owner of art collections and island retreats and super-midsize jets.”

Ross’s second wife Artis, an anthropologist, is terminally ill and so has chosen to have her body frozen (or murdered, depending on your level of credulity). Ross invites his estranged son Jeffrey to The Convergence in order to say a proper farewell, and to be an audience to Ross’s soliloquies about whether or not to accompany Artis into the tomb.

As Jeffrey tours the installation and makes his extended goodbyes, he is alternately amazed and repulsed by the weirdness of the place. Simulated doors lead nowhere, uncanny sculptures of people the halls, and big screens project soundless recordings of chaos and mob violence. (Television events counterpoint all of the action here, as they do in all DeLillo novels.)

DeLillo’s prose has always worked to eerily mirror the technology he critiques with its “transparent networks that slowly occlude the flow of all those aspects of nature and character that distinguish humans from elevator buttons and doorbells.” In his more successful novels — White Noise and Mao II are among them — he allows his allegorical figures to graduate into something like three-dimensional characters and he allows his language room to breathe. Here, both the humanity of his characters and the color in his prose have bled themselves white.

“There’s a meaning in mathematics.”

“There’s a meaning in biology…”

The above back-and-forth is typical of how the inhabitants of Zero K converse. The dialogue never becomes more casual, nor more formal. As early as 1978, Michael Wood noticed, in a review of DeLillo’s Running Dog, how “the characters all speak an easy contemporary idiom, but oddly they seem to be speaking to themselves.” Here, DeLillo doubles down on the muttering. All, in addition, are affectless. No one laughs and no one weeps.

The escort who shows Jeffrey around The Convergence is “a nondescript man who seemed less like a human being than a life form.” When Jeffrey remembers his birth mother he remembers her “mild documentary voice” and the way she would methodically peel prices from items she purchased and zone out to the traffic channel. She is, in other words, the sort of character who, if she appeared in a novel by anyone else, would prompt us to write Don DeLillo to let him know we’d found her and he could come anytime to collect her.

So what are we left with? We’re left with DeLillo’s Cartesian ruminations and the flinty rhythm of the words. If Zero K can fairly be called a systems novel, then the systems in question include “all the voice commands and the hyper-connections that allow you to become disembodied,” lost in “the numbing raptures of the web,” in contrast — and in complement — to what Jeffrey refers to as “the soporifics of normalcy, my days in middling drift.”

If a jet-set financier wanted to one-up the great Pyramids of Giza, what might he build? The Convergence is DeLillo’s suggestion. Just as the ancients made their tombs into objects of art, so might a contemporary artist attempt to transform a bunker in Siberia into an artifact-in-waiting.

Much of what we know of the ancient Egyptians comes to us from their tombs. The texts found there have taught us not just Pharaonic eschatology, but Pharaonic teleology. Since ours is a technological culture, one whose reality is every bit as pictorial as that of those ancients, it stands to reason our artifacts must represent the way we conceived of the aims of life. So what do we preserve?

“The time will come,” Ross explains to his son, “when there are ways to counteract the circumstances that led to the end. Mind and body are restored, returned to life.” The reunion of Ka, life force, and Ba, the spirit, in the house of the body. The secular and wealthy — the 0.1% — will preserve themselves in eternal youth (Artis, in suspension, is restored to vigor via cosmetic surgeries). The screens around will instruct the future about what these revenants knew on earth, and what they fled.

Toward the end of the book, Jeffrey, eyes on the big screen, learns that one of the marginal characters from earlier in the story has died in battle, having run off to join what he imagined to be a righteous cause. Two things are happening here. DeLillo is asking fundamental questions about the meaning of life (do our lives mean more when we spend them or when we save them?), but he’s also weighing the implications of post-humanism, uniting ourselves with the machines. This further problematizes the question of character, of where the borders of me end and those of someone who used to be me begin.

As one of the artists who designed The Convergence puts it:

We want to stretch the boundaries of what it means to be human — stretch and then surpass. We want to do whatever we are capable of doing in order to alter human thought and bend the energies of civilization.

The speaker here is one of a pair of identical twins (Jeffrey, who does not know them, imagines their names to be Lars and Nils, but then gets them confused, as do we). The whole of the chapter in which the above appears is presented as a kind of two-person lecture, each twin addressing the assembled investors in turn, back and forth, about a sentence or two apiece. This is cute for a page, but as they continue to annotate one another, voices indistinguishable from those of every other character, I was increasingly reminded of Kafka’s identical bumbling assistants in The Castle, and I was also reminded of why I’ve never been able to finish that book.

If Beckett’s late plays were longer, would we still read them? Or is their brevity why we do? Like The Castle, Zero K is a serious and even profound work of art. It is also a cold and a tedious novel to read. “I was tired of all this dying,” Jeffrey says. So is Ross Lockhart. And so are we. •