Edward Hopper’s stark street scene in “Early Sunday Morning” (1930) is one of the first paintings you encounter at the Whitney Museum of American Art’s exhibition “Real/Surreal.” The canvas invites you in; it’s almost as if you are standing on the other side of the street, staring at the humble line of brick and glass storefronts weighed down by the near symmetrical pattern of second floor windows. The barber pole, slightly tilted, and the fire hydrant, squatting on the left side, each suggest life on this street despite the dire, empty calm of the scene. With his precision of details, of light and shadows, Hooper had the uncanny skill of transforming the canvas from picture to experience. “Early Sunday Morning” draws you near, and as you move closer you notice the lettering on all the storefronts are blurred and unreadable even as you blink a bit to clear your eyes. You also notice how dark those interiors are, how absent of objects or humans, no plants in the windows, no faint glimmer of bottles on the windowsills.  It’s all quite lifeless. The scene provokes a suspicion that the crisp line of buildings is perhaps a façade, like some Hollywood set. Hooper “hovered between reality and non-reality” the wall text informs us; as I read that, I thought about how slippery realism can be these days.

While “Real/Surreal” features more than 40 paintings and drawings from the 1920s to the ’50s that illuminate “two powerful currents in American Art” in the 20th century, it is less a show about the line between these two aesthetic traditions than about how artists made use of both. Though many of the works are fascinating in their surreal, dream-like qualities, I was most compelled by how the show unsettles our experience of realist images. Hooper’s street scene is not so much a brick façade captured with precision in the morning light, but rather a keyhole into the dark interior mysteries that lie beyond those blurry letters and empty windows. In its juxtaposition of genres and its historical recall, the show illuminates just how surreal our realities have become over the past several decades.

Throughout the show, the most mundane moments are often haunted and psychologically fraught experiences. Andrew Wythe’s “Winter Fields” (1942) presents a ground-level perspective of an expansive countryside just beyond the acutely detailed image of a dead sparrow lying amidst twigs and dry weeds. In its realist details, the work reminded me of those 17th-century still lifes that presented the carcasses of rabbit, deer, and pheasant sprawled on finely hewn tables, the rewards of a hunt turned into a spectacle of pleasure. But here, the dead sparrow turns you inward; its delicately detailed feathers and prone position evoke contemplation about our place in front of this mundane moment of death — even the death of a sparrow in winter.

But Wythe’s realism, like that of many of the show’s paintings, holds this tension between image and contemplation. Anchored in Freud’s concept of the uncanny, in which the “line between imagination and reality is effaced,” much of this show puts into question our sense of realism. In some sense, this show historicizes two dominant aesthetics of contemporary art: abstraction and photorealism, that precise way of painting that emerged in the 1970s as a response to Pop Art and Abstract Expressionism. But ironically, both aesthetics play with our sense of sight, and even today’s hyperrealism provokes us to question what we are looking at: Is it a photograph? How did the painter make it so realistic?

Throughout the show, realism is rarely a photographic canvas, but rather at its heart is always a question of looking. For example, George Tooker’s painting “The Subway” (1950) carves knife-edged perspective lines that draws you back into the recesses of the station as carefully as a Renaissance painting pulls you down a corridor. 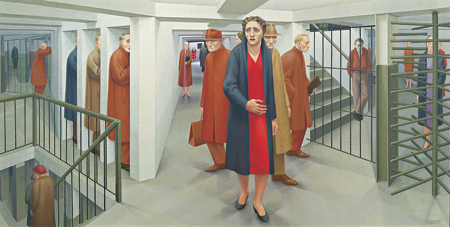 These passageways are populated with a stiffness of human activity, each figure wrapped in mud-colored coats and wandering like a zombie amidst the florescent white walls of an impersonal subway maze. The distraught woman at the center captures the painting’s strange tension between familiarity and distance, as she looks off into the distance while the other figures stare with conspiratorial fear. I wondered if these just might be the very people heading to those tiny storefronts in Hooper’s streetscape. But as Hooper’s painting provokes our unsettled curiosity about the interiors of those stores and apartments, Tooker’s subway suggestively turns the emotional panic and depression — so evident on the figures’ faces — into an external, psychological reality.

This act of looking is more clearly experienced in the works that tip towards the tradition of European surrealism: Jared French’s “State Park” (1946), with its oddly statue-like figures floating along a beach side; or Louis Guglielmi’s “Terror in Brooklyn” (1941), with its flattened streetscape that looks more wild west than urban neighborhood; or Peter Blume’s “The Light of the World” (1932), with its bright colors and concise composition that brings town and distant hills all swirling around a domestic scene where sculptures of classical cornices float below a large spinning ball of light. A group of people stare in wonderment; in the near distance, a gothic church hovers in shadows. It’s not hard to understand that technology has replaced religion in the metaphors of light and wisdom.

While many of these works evoke a dream-like reality, they rarely contain the utterly non-rational and unsettling symbolism and collages of European Surrealism in the works of Salvador Dali, Max Ernst, or Andre Breton. Dali’s “Persistence of Memory” (1931) was first shown in the United States at the Julien Levy Gallery in New York in the winter of 1932. It was one of the first surrealist art shows in the country, and featured Dali and Ernst, Picasso, and Jean Cocteau, among others. New York Times art critic Edward Alden Jewell wandered the small show in utter confusion. He advocated a slow approach: “The surréaliste exhibition cannot be done in a hurry. It takes a good while (unless one be, perhaps, a specialist) to get beyond the bewildering and splintering sense of conglomerate nonsense and begin the definite study of individual works of art.”   Once Alden found a place to slow down and look, he still sought the advice from Levy himself, who explained, “the artists are trying to objectify the subconscious. It seems to have started years ago with Dr. Freud.”

In the fall of that year, the Whitney held its first biennial show, dedicating one gallery to surrealist works by American artists. Blume’s “The Light of the World” was included in the show. Hooper’s painting “Room in New York” (1932) was also on display, but in a gallery far from the surrealists. Jewell began his observations of the show with an exasperated tone:

Beside the point, manifestly, is one’s approval or disapproval, Surrealism has got a firm foothold in American art and the fact may just as well be faced. Of course it is only to be expected that these borrowed European isms should appear “dated” over here almost from the start, since it takes times to become proficient in a style lifted from ingenious ateliers of Paris. But nothing is ever gained by raising an outcry against the inevitable.

The critic’s war-like metaphor of Surrealism’s takeover of American art was not unusual at the time. Surrealism’s revolutionary origins in Marxist ideas were part of the early fascination with and fear of the movement in the United States. The criticism of the art was often wrapped in politics as much as in aesthetic concerns. One politically forceful assault claimed the art and the artists were part of a “new move by international communists in their war on standards in religion, industry, society, and the arts.” But the appeal of Surrealism was in its promise of liberation (rather than its more common critique of escape) from the realities that shaped people’s lives, offering a release from conventional ways of seeing.  “Politically and poetically,” claimed one proponent of this new art, “Surrealism seeks man’s liberation.”

In “Real/Surreal,” you encounter a hint of this revolutionary echo most clearly with the beautiful drawings by Mabel Dwight, which capture the whirl and force of consumer culture and cinema with subtle critique or humor and mystery. Dwight was active in the Communist Party in the 1930s and her art mixes surrealist techniques with everyday scenes to question the Depression era’s escapist attractions. Similarly, Philip Guston’s “Drawing for Conspirators” (1930) captures a stylized heaviness of a lynching scene, the Klan figures looking like sci-fi aliens in their stiff hooded masks. Off in the distance we see one man hanging from a tree next to another pierced on a tilting cross investing the image with a symbolism that underscores its social critique. Such works slide more easily into the social realist genre of the time, but their place here illuminates how the juxtaposition of symbols and images were important in social protest art.

Similarly, gay artists of the time found in the blurry lines between Surrealism and realism a space of social satire and homoeroticism. Paul Cadmus’s “Fantasia on a Theme by Doctor S.” (1946) centers on the idealized physique of a muscular sailor situated against the shabby landscape and unhealthy flesh tones of the onlookers. 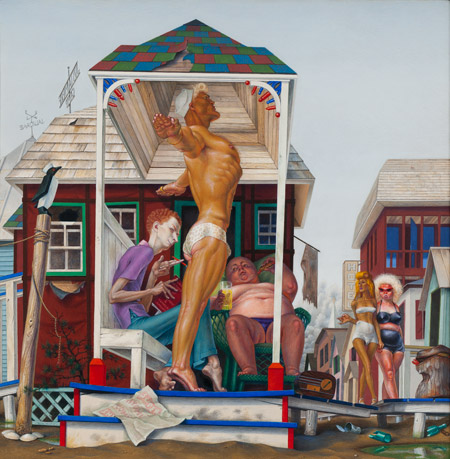 Throughout the 1930s, Cadmus created a number of satirical paintings that presented the nearly naked male form as something to admire and desire. He used egg tempera to evoke a Renaissance palette and a style of magical realism to create layers of visual desires for both subjects and viewers. Like other artists in his circle, including French, Cadmus used such a play of realism as it own mask to imagine subtle homoerotic fantasies.

After spending some time in this exhibit — with an oddly shaped face here, a desolate but compelling landscape there — you start to think you have seen these images before. They sit in our collective consciousness and are recalled in a shadowy scene from Sunset Boulevard; or in a dark moment of a David Lynch film; or in a stiff and strange Diana Arbus portrait from the late 1960s; or, more commonly, in a recent fashion advertisement in a glossy lifestyle magazines. The fashion industry embraced surrealist aesthetics in the 1930s and ’40s, converting and distorting the symbols of dreams into consumable fantasies of luxury goods, blurring that line between reality and imagination with precision.

In this process of transforming Surrealism from its artistic and political origins into a personal fantasy through consumer culture, realism itself has changed. While at the first Whitney Biennial, it was clear where the lines between these two aesthetics rested, “Real/Surreal” suggests that we have less of a hold on these boundaries today — and this may reflect something larger in the culture as well. What importance do these distinctions have in an age of scripted reality television, when video games offer realistic fantasies of escapist amusement, when news reports of famine or natural disasters are routinely described as “surreal,” and when we daily create fragmented collages of our lives on Facebook walls? This exhibition reminds us that we all hover in that space between reality and non-reality, between imagination and the real, transforming the external word into peculiar projections of our inner lives. • 22 December 2011