In the spring of 1914, Mary Wood entered the Royal Academy of Art’s summer exhibition with her shawl and a meat cleaver. Wood, described by news reports as a woman of “distinctively peaceable appearance,” stood in front of John Singer Sargent’s portrait of the writer Henry James, took out her cleaver, and hacked the work with three quick swings, shouting, “Votes for women!” This is how the Sun newspaper reported what happened next:

The visitors to the gallery turned suddenly in the direction from which the shout came but were too late to prevent the mischief. They saw a middle-aged woman hacking the picture with a cleaver. The first jab broke the glass and cut the canvas. The second blow damaged the canvas still further, and although the woman was then seized by a detective, she succeeded in delivering a third blow.

Such “mischief” was decried in press reports, even by those who supported the suffragettes’ cause.

It is not clear if Wood knew of Henry James’ literary reputation, but the symbolism of the aging writer’s portrait, darkly reserved and stoic in his directed gaze, was a powerful target for Wood’s larger political message. In a letter to a friend, James expressed his concern, feeling “very scalped and disfigured, but,” he concluded, “I seem to be pronounced curable.” Many critics echoed such personifications of the painting. An attack on James, who had become a beloved figure of British culture, was an attack on British tradition itself. The body of the image transferred into the body of the nation. 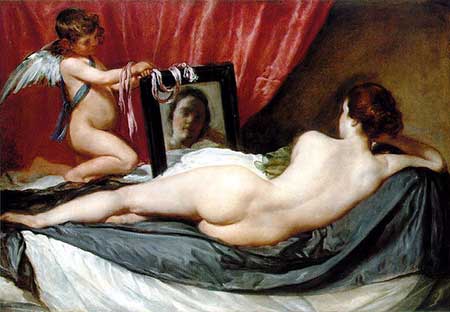 A few months earlier, Mary Richardson took a knife to Diego Velázquez’s The Rokeby Venus hanging in the National Gallery, slashing the naked back of Venus in several places. As police led her out of the museum, Richardson proclaimed: “Yes, I am a Suffragette. You can get another picture but you can’t get another life.” Her words were directed to the many suffragettes held in prison for their protests, their hunger strikes met with violent force feedings. Why, such protesters asked, do we admire the idealized bodies of women in art, but imprison actual woman wanting political equality? Wood and Richardson’s actions prompted tighter security at museums for female patrons. Ladies’ muffs and umbrellas had to be checked at the door for the first time. Politicians and museum directors discussed excluding all women from English art galleries, but never implemented such plans.

The British suffragettes’ stabs at paintings are one compelling moment in this show that explores the history of iconoclasm in British art from the reformation to contemporary artists. It is a large sweep of time in a short space, but at its core is a rethinking of iconoclasm as something more than thoughtless destruction. “Iconoclasm,” writes curators Tabitha Barber and Stacy Boldrick in the catalog introduction, “is a coming together of art, politics, and social history.” But underneath this approach is the modern echo of Marcel Duchamp’s famous line: “Destruction is also creation.” It is a show that finds in a history of art’s demise, a vital, creative history.

Organized in thematic areas of religion, politics, and aesthetics, the show presents you with fragments of church sculptures, shards of stain glass, hunks of former statues, defaced coins, and those paintings that the determined suffragettes approached with sharp objects, photographs of the mangled canvases hang next to the restored originals. Amidst this survey of violence I wondered what might come of looking at art’s destruction?

It is the bodies in art that suffer the most in this show. Most acutely in one of the first works you encounter: the life-sized, limestone sculpture of the dead Christ. Known as the Mercers’ Christ named after the Mercers’ company chapel where it was discovered amidst a 1950s excavation, the sculpture’s history remains a mystery. Crafted in the early 1500s, the work is carved with a precision of details, from the muscles and veins done with acute realism, to the folds of soft cloth that surround the body. Little is known of this work or who created it, and even less about how such a solid work was mangled with such force. His right arm has been severed at the shoulder, his left hand cut at the wrist, and his face is severally mutilated. Such damage transforms the contorted body of the dead Christ into an image much more pitiable than mere crucifixion.

The 1500s were not a kind century for religious iconography in England. When King Edward VI inherited the throne at age 9 in 1557, a council of Protestant reformers ruled England and implemented the destruction of all Catholic religious icons. Later, the Catholic Mary ascended the thrown, and tried to reinstall such iconography with limited success.

It wasn’t until the English Civil Wars of mid 1600s that the destruction was enacted with systematic religious zeal fueled by puritan iconoclasm. Through Parliamentary ordinances against “monuments of superstition and idolatry” a large net of prohibitions against all kinds of religious images was enacted. As one wall panel in this show tells us, “paintings, stained glass, music and religious ceremony were seen as visual and sensuous distractions from the word of God.” The puritans would, of course, find England too resistant to their reforms, and set sail for New England, establishing the start of a long history in the US about art’s distracting power.

Throughout England, reformers forced a systematic destruction of all religious images, decapitating sculptures, destroying wooden altar screens. The intricacies of stain glass windows were brought down with the simple effort of using long wooden poles to smash at the glass, the delicate shards splintered when hitting the stone pavements of the cathedral floors. In one display of small wooden panels used as an altar screen, the faces of the saints are scratch out with determined force, leaving headless bodies sitting or standing in an odd kind of surrealist drama. Once damaged, the images lost their mystical power, and were either thrown into pyres or, more commonly, reused as cabinet doors or made into tables.

While religious zeal prompted such attacks on saints and gods, it was the bodies of kings and leaders that were pulled from pedestals in later decades. Consider Joseph Wilton’s regal statue of King George III commissioned by the Colony of New York in 1766. Poised on horseback and draped in Roman robes, he looked more Marcus Aurelius than the rounded form of the King. The statue stood with proud splendor in Bowling Green in lower Manhattan until July of 1776 when, in the days after the Declaration of Independence was signed, a frenzy of solider and citizens pulled down the statue, shattering it into pieces. George’s head was sent back to England, never to be seen again. Other parts of the horse’s body were melted down and made into bullets to be used against the British soldiers during the revolution. All you encounter of the work today is a small bit of the horse’s hind thigh, an abstract fragment, twisted and scratch, that holds it own symbolic meaning.

Such attacks on statues conjure more recent ones. Protestors in Kiev just toppled Lenin’s statue, shattering it with axes in a frenzy of anti-government, and anti-Russian protests. British and American soldiers pulled down a statue of Saddam Hussein in 2003. Its dark, solid form fell in a slow-motion fall, the whole body intact as it lay on the ground, as if it were just going to sleep. Celebratory locals slapped at it, hitting it with shoes, as if it were the body of Hussein himself.

But what does it say that a show about iconoclasm, filled with the fragments and actions of believers and revolutionaries, draws us ultimately to artists themselves? In 1957 a group of students stormed the Dada exhibition at a gallery in Paris, removing the artist Man Ray’s work, “Objects To Be Destroyed” (1923) a ready-made art work of a metronome, the swinging arm of which the artist attached a paper drawing of a human eye, its every watchful stare bouncing with rhythmic precision. The students, espousing nihilist tendencies, took the work to a nearby street, placed it on the sidewalk and shot a single bullet through it, proving to the artist and others that indeed the object can be destroyed. Ray was not impressed. In response he had 100 replicas made, naming them Indestructible Objects, resisting iconoclasm’s finality

As the students shot at Man Ray’s metronome, Gustav Metzger was formulating his manifesto for Auto-Destructive Art, with its emphasis on art’s ephemeral qualities within an age of mutually assured nuclear destruction. Through the 1950s and 1960s, Metzger art was a politically engaged practice that merged the iconoclastic act with the artistic one. As Metzer’s manifesto from 1961 declared, auto-destruction of art “is an attack on capitalist values and the drive to nuclear annihilation.”

In 1966 Metzger organized the Destruction in Art Symposium (DIAS) in London (two years later in New York) that brought together a range of conceptual and performance artists. One work that I found captivating in this show was “Melted Slide” from Metzger “Projections” (1966) series. It was the last work of the symposium in which Metzger projected slides of DIAS participants, leaving each image sitting in the machine until the heat slowly burned through the slide. Art and artist disappear in a thermal flash.

The aesthetics of this “Melted Slide” is echoed in the more contemporary work of Douglas Gordon. “Self Portrait of You + Me (9 piece QEII) (2008) presents a series of mirrored panels partially covered by official portraits of Queen Elizabeth, each image deteriorating across the work as if being burnt away with a blow torch. As the cultural image of the state fades away, what remains is the shiny image of us.

This self-reference is what comes up in much of the contemporary works that end this show. The political and religious ardor of earlier ages, including Metzger’s radical mid-20th century performances and events, have turned towards our own destruction. In Jake and Dinos Chapman’s “One Day You Will No Longer Be Loved” (2008), the artists repaint anonymous 19th century portraits, turning the realism of the images into ghoulishly decaying faces, reminding us of our march toward aging destruction. 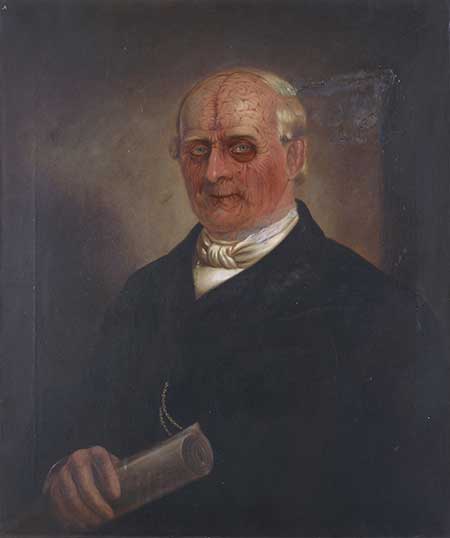 And maybe this is what makes iconoclasm so intriguing: It ignites a recognition of an image’s magical power in a time when art seems so removed from our lives in high-priced art auctions and preserved in museum exhibitions. Quoting the art historian Tom Cummins, W.J.T. Mitchell relates in What Do Pictures Want?: “When students scoff at the idea of a magical relationship between a picture and what it represents, ask them to take a photograph of their mother and cut out the eyes.” Amidst the surfeit of images today, the history of iconoclasm reminds us how powerful images can be in shaping and reshaping our relationship to the world. And, more importantly, how ephemeral every image can be. “The work of iconoclasm is never finished,” the show’s curators argue, adding in a haunting note: “iconoclasm never ends.” • 20 December, 2013