In the darkened rooms of the “Arcimboldo, 1526-1593: Nature and Fantasy” exhibit at the National Gallery of Art in Washington, D.C., hang strange and unwholesome monster faces. The portraits lining the walls are a perversion of everything we consider to be natural and right and harmonious about the human visage. In Arcimboldo’s “composite heads,” men are made of candlesticks and gourds and fish and sticks. Arcimboldo also created invertible paintings that, when held over a mirror, show two totally different images. You might think you’re looking at a metal bowl filled with assorted vegetables, except when you hold it over a mirror — reverso! — it’s now a fat guy with thick mushroom lips and a turnip beard sporting a metal bowl for a hat.

The exhibition’s signature portrait is “Vertumnus,” the Roman god of the seasons. Like Arcimboldo’s other composite portraits, Vertumnus is something of a riddle, a funny tribute to his benefactor, Emperor Rudolph II. It portrays Rudolph as Vertumnus, as the harvest itself. The face of Rudolph/Vertumnus has nothing human about it save the form — no flesh, no blood, no bones. It is composed entirely of fruits and vegetables. A long pear nose dangles over cherry lips. Root vegetables and gourds arrange a neck and chest, which are adorned with flowers, an artichoke, and a cabbage. “Vertumnus” has an ear-of-corn ear and peapod eyebrows. Bunches of grapes make up his hair. It is a funny painting, I guess, and it’s a remarkable likeness of the Emperor. Yet it is also a very weird painting and the longer you look, “Vertumnus,” with his bulging apple cheeks — grows increasingly grotesque in his overabundance, and horrible. It is Rudolph as Vertumnus as the harvest as monster.

Arcimboldo’s milieu was the wildly experimental and inquisitive world of late-Renaissance aristocratic Europe. It was the Golden Age of exploration, globally and microscopically, an age influenced by impossible da Vinci flying machines and curiosa from newfound lands abroad. It was a time of zoos and gardens and wonder cabinets, atlases and encyclopedias, libraries and museums, places where disparate and differentiated objects and ideas were brought together to create complete, if uncanny, microcosms that functioned according to their own internal logic. Arcimboldo got his big break in the 1560s when he was appointed court painter and portraitist to the court of Maximilian II, Emperor of the Holy Roman Empire, and later to Maximilian’s son, Rudolph II. Both father and son took their pleasure in this age of discovery, collecting a team of botanists and naturalists to accompany the exotic plants and animals in their zoological gardens and wonder cabinets. At the courts of Maximilian II and Rudolph II, discovery equaled delight.

The wonder cabinet of Rudolph II was among the greatest of its day, and Rudolph loved that wonder cabinet, he really did. That he hung “Vertumnus” in there — alongside other cabinet favorites such as his collected works of human deformities and his assemblage of signet rings — was big praise. Like most of Arcimboldo’s portraits, “Vertumnus” is both an homage to his benefactor’s collection and a wonder cabinet in its own right. The familiar fruits and grains that make up his face include species that were at that time exotic on the Continent — corn from the New World and eggplant from Africa and Arabia. It resembles a scientific naturalist study but is also an impossible object. It is a religious painting, a royal portrait, a mélange of miniatures, a supernatural caricature with references to Latin poetry.

Strolling through the exhibit, it’s easy to imagine this world of Arcimboldo as one of decadent absurdity, of eccentric aristocrats possessing a morbid fascination with the ridiculous and the unfamiliar — Rudolph and his team of mad scientists swilling fake unicorn blood in a grand Masonic-style hall, surrounded by sketches of nude African boys and compromised elephants. Call it weird for weird’s sake.

From this perspective Arcimboldo’s work — largely ignored after his death until the 20th century — is just a whimsical break from the otherwise smooth course of the Enlightenment. For most of recorded Western human thought (if one may make the sweeping generalization), the task of Great Thinkers was to disentangle and separate, to reduce things and ideas to their purest, most elemental states. Harmony and integrity were the world’s best achievements, and the task of humans was to locate those forms. This is how humans progressed, the logic goes. Or, you can flip this thought around and say that the common Western definition of progress is the world inching from a chaotic state to an increasingly ordered one. Intellectually speaking, the biggest problem with monsters was not that they were scary or inappropriate for children or even that were ugly, but that they were illogical. What is monstrosity anyway? A monster is an aberration. A freak of nature. ‘Monster’ comes from the Latin monstrum. One way to translate monstrum is “warning.” We see wildness in monsters; they are creatures we can’t understand, creatures beyond our control, who are therefore unknowable. Monsters, because they are irregular, are therefore irrational. Monsters had nothing to tell us about the pure elements. This is why we are told it’s OK to laugh at the portrait of Vertumnus. He is a parody of knowledge.

As such, Arcimboldo’s late-Renaissance hobbledygobbledy aesthetic vision sticks out in Western thought like a sore and rather deformed thumb. But where most see monsters as a question mark, Arcimboldo saw in his monsters an explanation. Another interpretation of monstrum is “to show.” We think that monsters exist so that we can look at them, judge them, laugh at them. In actuality, the monsters are looking at us. As they show us ourselves, they are showing us the world through the monster’s eyes. It is a world where deformity and irregularity are the norm.

Maximilian once commissioned Arcimboldo to make four paintings of the classic Four Elements — Earth, Air, Fire, Water — held by many cultures since antiquity to be the fundamental elements upon which all matter is based. A contemporary artist might do this with a simple white canvas for air, or a brown one for Earth. Arcimboldo complied with his usual over-determined, anthropomorphic mayhem. In “Fire,” we see a monster whose cheek is a flint and chin an oil lamp. A candle makes up part of a neck that sets ablaze a crowning campfire of hair. The bust is an array of firearms: a cannon, the barrel of a gun, a scoop filled with gunpowder. The face in “Water” is made up entirely of sea creatures, save a pearl necklace and a simple pearl earring dangling from the earlobe (which is an oyster shell). What is Fire to us anyway but candlesticks and woodchips and heat and war? What is Water but a home for the infinite creatures of the sea? 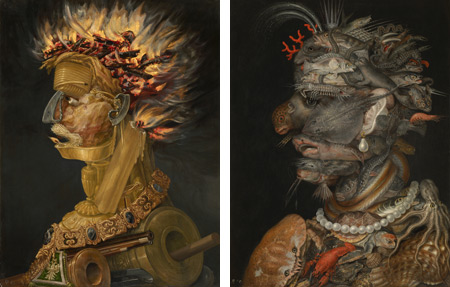 Knowledge, says Arcimboldo, is a mixed-up continuum. In this, Arcimboldo was very much our contemporary. He understood the importance of randomness and unpredictability. To know the world is to stop seeing life as a story with a beginning and an end, but rather as a place where an ear of corn is a man is a painting is virtue is fealty to the emperor is laughter. The world — as Alexander Pope wrote in “The Rape of the Lock” — is “harmoniously confused, where order in variety we see, and where, though all things differ, all agree.” So, Arcimboldo didn’t really fill the unknown with monsters. In Arcimboldo’s world, there are no empty spaces. Life, says Arcimboldo, is a monster. • 2 December 2010