In the beginning, the Wall was made of barbed wire and soldiers. On some streets, cinder blocks had been stacked. In the Neukölln borough, on Harzer Straße, the Wall was about neck-high. East and West Berliners could look at each other over the Wall but they were not allowed to touch. In a photograph taken on the first day, August 13, 1961, two mothers stand on either side of a coil of wire that reaches to their knees. The babies they hold stretch out to each other, inches of air between their fingers. There seems to be a magnetic repulsion preventing them from holding hands. In another picture from that day, a young man in a crowd stands across from two border guards; a chest-high stack of cement is separating them. The young man appears to be asking one guard a question — both lay their hands on the Wall. Their hands are almost touching. The second guard smiles and leans upon the Wall as if he were socializing at a pub.

We will build the Wall in summer, declared GDR leader Walter Ulbricht, a summer day will be best. A Sunday in summer, when Berliners will be on holiday, having picnics at the lake. We will begin quietly, at night, when Berliners are sleeping, and work mostly in the dark. We will tear up the roads to make them impassable, and seal the border crossings. Railway lines will be cut off and train stations will be turned into deserts. Never again will East Berliners be able to leave of their own accord. And when the people of Berlin arise in the morning, our work will be complete.

To build a wall in the middle of a city, you must treat homes as highways. Front doors become back doors. Windows become barricades. Rooms must be emptied of the evidence of people. The apartment buildings on Bernauer Straße began evacuating their people as soon as the Wall went up. In time they became vacant, apartment facades, creating an optical illusion of a city. In a few spots, apartments were completely absorbed into the body of the Berlin Wall. Before the Wall, a person in the East could just walk out the front door and enter West Berlin. After the Wall, front doors were nailed shut or walled up — so people went upstairs. They jumped to West Berlin from second- and third-story windows. In time, these were bricked over too.

The official name of the Berlin Wall, given by the East German authorities, was Antifaschistischer Schutzwall — “Anti-Fascist Protection Rampart.” The insinuation was that their West German neighbors still had a long way to go toward de-Nazification. The Wall, claimed East German authorities, would protect East Germans from these Western fascists, who conspired to prevent the “will of the people” from building their socialist state. In English, it is a small grammatical difference between ‘will’ and ‘wall’.

From the inside, the Wall was not a wall but a multiplicity of walls. The first wall made a hundred-mile band around the entirety of West Berlin. It ran through fields and rivers and blasted through city streets. This wall looked like what we think of when we think of the word ‘wall’. On the Western side, the first wall was decorated with graffiti and slogans. West Germans and foreign tourists would come to this wall with binoculars and cameras. East Germans were unable to approach the first wall, as it was surrounded by a heavily guarded three-mile-wide restricted zone. On the Eastern side, this wall was kept plain. From the West, the first wall was the wall made of concrete slabs that reached twelve-feet above the ground. From the East, this wall was the second wall. The first wall on the Eastern side was the three-mile-wide wall that was built of invisible threat.

On the Eastern side, the third wall was a signal fence running 736 miles long and six and a half feet high. This wall was a fence made of barbed wire lined with low-voltage electrified strands. If the third wall were touched, a silent alarm would whisper to guards nearby.

The fourth wall was a “protective strip” 1,600 to 3,300 feet wide that adjoined the border itself. It was guarded, eventually, by almost 700 watchtowers and 12,000 border guards. The fourth wall was made of concrete and steel and wood and guns and eyes.

There was a wall of dogs and a wall of road and a blinding wall of light. There was a wall that was a carpet of steel spikes that could impale a potential crosser, and a wall that was a trench. There was a wall of steel anti-vehicle obstacles known as Czech hedgehogs that looked like miniature ziggurats. During the Second World War the Germans called these strange constructions ‘dragon’s teeth’. The Wall was forged of war ruins and storefronts and whatever the government could find. Torn-up gravestones from the Hedwig Cemetery paved the road inside the “death strip.”

There was a 20- to 50-foot wide wall of sand illuminated by floodlights. Guards kept the sand cleanly raked to show off potential footprints. The pattern on the sand was not unlike that in a Zen rock garden. Stripped bare of growing things that are temporary and fragile, rock gardens are places to meditate on the true substance of the reality that lies beyond appearances. Zen monks will sometimes rake lines in the sand to mimic the undulating waves of streams. We are forever manipulating our environment, say the gardens, to reflect our ephemeral desires. But look closely at the lines and you will see that the sand is still just sand. 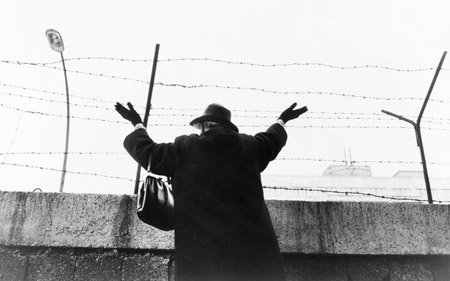 From the sky, the Wall once again entered the no-man’s land between psychology and substance. “Where does the state end,” asked Peter Schneider in his novel The Wall Jumper, “and a self begin?”

From a homemade hot air balloon in the dead of night, for instance, you would only make out a few lights. The course of the Wall looked hazy – wrote former East German Günter Wetzel of his family’s famous border escape — and got hazier as the balloon spun around. Soon, you would lose your bearings entirely. But no matter where you floated in the dark, the presence of the Wall would remain. Later, you would only know for certain you had reached the West when you saw an unfamiliar piece of farm machinery. The last thing you would notice before you crashed to the ground were the treetops swaying in the wind.

From the sky, wrote Peter Schneider, you couldn’t tell East from West. “Seen from the air, the city appears perfectly homogeneous. Nothing suggests to the stranger that he is nearing a region where two political continents divide.” From an airplane, he wrote,

…the wall in its fantastic zigzag course seems to be the figment of some anarchic imagination. Lit up in the afternoon by the setting sun and lavishly illuminated by floodlights after dark, the wall seems more a civic monument than a border.

On a clear day the traveler can watch the plane’s shadow skimming back and forth across the city. He can track the plane closing in on its shadow until it touches down right on top of it. Only when he disembarks does he notice that in this city, the recovered shadow signifies a loss. After the fact, he realizes that only the plane’s shadow was free to move between the two parts of the city….

From America the Wall was television, and had always been that way. Twenty-five years ago, on November 9, 1989, the Wall was on television again, only this time it was falling. German people were running in and out of the Wall, and jumping around it, and singing, and crying. East and West Berliners were pulling each other on top of the Wall — it was important to be on top of the Wall. A man in a suit was pounding the Wall with a small hammer, determined to take it down. Another man came and lifted him up so that the destruction could start at the top. Other footage showed the East Berlin police carrying away slumping East Berliners on stretchers and in their arms. It was not clear, said an American news reporter, if these people were drunk or being arrested. “When might the Wall come down?” another reporter asked the Deputy Mayor of West Berlin. She told him that the fall of the Wall would begin with a psychological dismantling.

As the television played in the background of America someone said, “I never thought I’d see the end of Communism.” Soon after, the Wall was dust. From Potsdamer Platz, you can now follow traces of the Wall via the “Berlin Wall Orientation System.” Without the informational markers it is hard to get one’s bearings. Most of the Wall is memory and a visitor or a child might not realize it was ever there at all. In some places, chunks of the Wall have been left standing; in others, the Wall has become maps or listening stations or photographs of its former self. There are periodic exhibitions on the history of the Wall on the Wall, or documentation of the Nazi era. A surviving watchtower near Stresemannstraße is now a “panorama observation tower.” From it, you pretend to be a guard and keep watch on the “enemy” West. On the East Side, the Wall has become an open-air painting gallery. A ¾-mile stretch of this wall has recently been replaced by luxury condominiums.

Underground, the foundations of buildings lost under the Wall are still being uncovered. In 2010, archaeologists revealed the remains of Bernauer Straße 10a. Only fifty-three years old and twenty-five years gone, the Wall is an archaeological ruin.

In some places the Wall has simply become a line. A double row of bricks laid into the street marks the former border. As a visitor, it can be confusing to come upon these bricks; you do not know whether to step on them or over them. You find yourself looking down the road to see how far you would have to walk to go around them completely.

A wall casts a shadow between ground and sun. It is, therefore, like a gnomon, the wedge that makes the shadow on a sundial. As the shadow is not possible without the gnomon, the gnomon is also the shadow itself. In geometry, a gnomon is the part of a parallelogram that remains after a similar parallelogram has been removed from one of its corners. A gnomon, therefore — like the Wall, like a memory — is both presence and absence. This doesn’t mean that shadow is the same as substance. Nor that shadow is unreal. Negative and positive, shadow and substance always work together. “How can I be substantial if I do not cast a shadow?” asked the psychologist Carl Jung. “I must have a dark side also if I am to be whole.” The word “gnomon” is derived from the Greek and literally means “one who knows.” A gnomon is an indicator, a pointer, directed at both darkness and sun.

The shadow, wrote Jung, is that which each man despises in himself — the dark side. But it is also the darkness that lingers in the consciousness of a particular society. We often try to eliminate the shadows by ignoring the shadow-makers or trying to destroy them. But the shadows only disappear when shrouded in more darkness, and then, they are only hiding.

“It will take us longer to tear down the Wall in our heads than any wrecking company will need for the Wall we can see,” Peter Schneider wrote.

“But the city outside, with its fire walls, garden walls, border walls — those walls will still be standing when no one is left to move beyond them.” • 10 November 2014