Have you ever felt odd? Perhaps an odd feeling came upon you one morning at the market. You saw the piles of vegetables and the cuts of meats covered in clear plastic. You noticed, with particular attention, the little signs above the individual fruits giving their names and prices. Suddenly, it seemed unaccountably odd that any of this should make any sense to anyone. How very strange that these numbers and words and pictures and physical objects are all related, you thought. It was a warm morning and you walked out into the sunlight with a beating heart and a sheen of sweat on the palms of your hands. For a few more moments you trusted neither sun, nor earth, nor sky. All aspects of reality seemed as arbitrary to you as those signs above the fruit in the market. And then the feeling faded and you were back in the world again. You proceeded to go about your day.

René Magritte must have had mornings like that. Think of the painting he made in 1935. The painting is called “La Clef des songes” (The Interpretation of Dreams). It is a painting of a board with four panels. The board is like an old school primer, used to teach children the names of things. There is a horse, a clock, a pitcher, and a valise. Under the objects are words. The horse is labeled “the door.” The clock is labeled “the wind.” The pitcher is labeled “the bird.” And the valise is labeled “the valise.” Why are three objects mislabeled, while one object is correctly labeled? Maybe it is like our confused morning at the market. We felt odd not because the fruits were labeled incorrectly, but because the relationship of signs suddenly struck us as utterly arbitrary even when everything had been labeled correctly. Likewise, when we see the three incorrectly labeled objects in “La Clef des songes,” we begin to distrust even the correct labeling of the valise. What does the word “valise” have to do with the picture of the valise, and what does the picture really have to do with the actual thing? When we represent reality in words or pictures, do we come closer to that reality, or push it further away?

Or think of the painting Magritte completed in 1933. It is called “The Human Condition.” 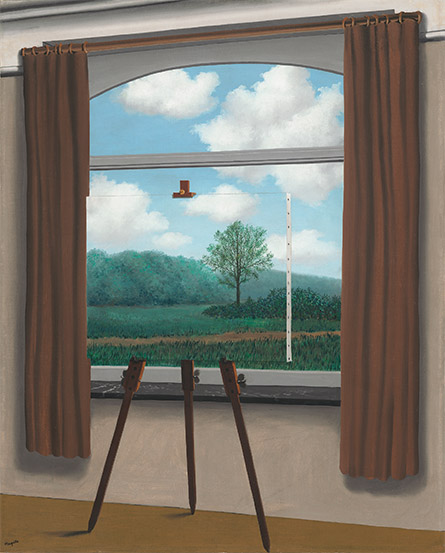 The painting shows us the window in an ordinary house. The drapes are open. It is a sunny day outside, with grass and trees, a blue sky and a few puffy white clouds. An easel sits in front of the window. Upon the easel is a painting. The painting depicts the scene outside the window. At first glance, this doesn’t seem so strange. But then we notice that the painting is exactly like the scene outside the window. Even the position of the clouds fits perfectly with the clouds outside. It is as if the painting simply continues where the real world left off. It is as if the clouds are moving across the sky and then across the surface of the canvas as well. The painting is too much like the reality outside to be real.

René Magritte was always interested in cleverness in visual tricks and puzzles. Magritte was born in Belgium, but he moved to Paris in the mid 1920s. He’d been trained to paint at the Beaux-Arts Academy in Brussels, but he didn’t take to the Academic style of painting. He was looking for something different, something new. The 1920s were a good time to be in Paris for a man like Magritte. The Impressionist heyday had been over for many years. Post-Impressionism had exploded into any number of movements. Cubists and Futurists were running around alongside Neo-Fauvists and Expressionists. Artists like Mondrian and Delaunay were refining their techniques for purely abstract painting. Everything interesting in art was happening outside the walls of the Academy.

Magritte fell in with a group of artists who were calling themselves Surrealists. André Breton was their self-declared lord and master, though that declaration caused no end of schisms and counter-schisms. Breton wrote the first version of his Surrealist Manifesto in 1924. There, Breton claimed that Surrealism was a set of practices for releasing and expressing the unconscious mind. Surrealism was the place where the dream state and the waking state could co-exist on equal ground. It was a place where rationality was no more real than irrationality.

Many of Magritte’s paintings from the 1920s are attempts to put Surrealist ideas into images. There is a dreamlike quality to these paintings, the vague sense that we are being shown scenes both impossible and meaningful. Take “The Secret Player” from 1927. Two men play cricket on a dirt square enclosed by large wooden pins. The right side of the painting is an opened curtain, as if we are looking at a stage. A woman inside a box behind the two men has a disturbing contraption on her face. And, most dreamily, a giant turtle floats through the sky just above the two men. This is the kind of painting that begs to be interpreted the way that a dream might be interpreted in Freudian analysis. The only problem is that we do not possess any information by which to interpret the dream. The painting simply shows us a selection of intriguing and seemingly significant images, just like in a dream.

But by the end of the 1920s, Magritte had become bored with painting dreams. He wanted to push further, to blur the boundary between dream and reality. He wanted, more importantly, to shake our confidence in all images, all representations of reality. In 1929 Magritte made a very famous painting of a pipe. The painting shows a large pipe, the kind you smoke, against a white background. Under the pipe are the words, “Ceci n’est pas une pipe (This is not a pipe).” But it is a pipe. But it isn’t a pipe, of course, since it is just a painting and a painting of a pipe is not, actually, a pipe. The painting is entitled “The Treachery of Images.” 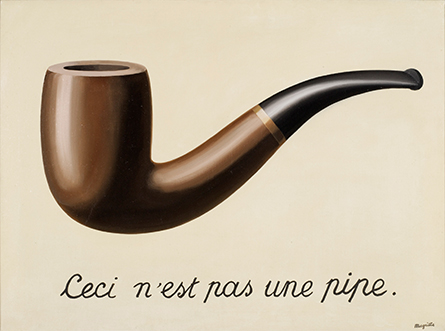 The same year that Magritte painted the pipe that was not a pipe, he painted a picture called “The False Mirror.” 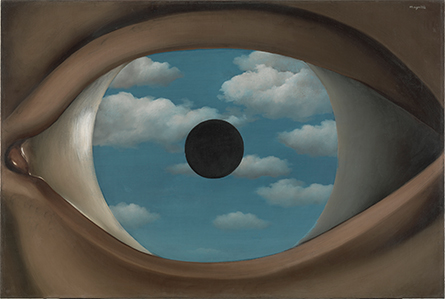 “The False Mirror” is a painting of an eyeball. The eye is, presumably, looking out at the sky on a day with scattered clouds. We know this because the sky and the clouds are reflected in the iris of the eye. In the very middle of the eyeball is a black circle, the pupil. The longer you stare at “The False Mirror,” the more disturbing becomes that black center. Looking at the black hole of the pupil, we begin to wonder whether there is also a black hole in the middle of the sky that the iris is reflecting.

Why is the center of the human eye such a black hole, anyway? The scientific explanation has to do with optics and apertures. But the pupil is also compelling as a symbol. There is darkness at the center of our ability to see. There is a black hole where sight begins.

Magritte was fascinated by this dark hole. He was fascinated because he often wondered whether the eye was just as much a liar as paintings and words. A painting of a pipe is not a pipe. Words like “horse” and “valise” have no essential connection to the horses and valises in the real world. But where is that real world? How do we get to it? Most often, we see it right there in front of us. But not really. The human eye, after all, makes complicated images of what is “out there.” The eye makes representations of the “real world” just like painted images do, or words. “The False Mirror” reveals an unsettling truth. We are trapped in a circle of representations. We never get out of that circle in order to touch base with the world as it really is. We don’t know what the world really is. We simply move from one layer of representation to another.

Let’s look at Magritte’s painting, “The Human Condition” one last time. The painting suggests that paintings in general are not to be trusted as accurate representations of reality. That is an inherently disruptive thought for a painting to be making about itself. But there is something even more radically unsettling about “The Human Condition.” The continuity between the actual sky and the painting of the sky in “The Human Condition” suggests that there is no great difference between the two. The real sky and the painted sky are both representations of a supposed “real reality.” The “real” sky is the image projected onto our retina. The painted sky is the image a painter creates in fidelity to the image she’s gotten from her retina. Both of these images are representations. We never get out of that closed circle, that infinite trap of representations.

There is a dizzying sensation created by many of Magritte’s paintings. We cannot trust words or images— we cannot trust anything. It is sometimes said that Magritte’s paintings are mysterious. But that may not be the best word to describe the disturbing quality of his paintings. A mystery may go unsolved but every mystery is, at least in principle, solvable. There is no solution to the problems that Magritte shows us. We are trapped in our representations and there is no way out. There is no “real world” to refer to, to touch base upon. The “real world” is a black hole, like the empty abyss at the center of our pupils. The world that we actually inhabit is a tissue of representational lies held together by other lies. It is a case of absolute, all-encompassing vertigo.

And then the feeling of vertigo fades and we are back in the normal world again. We proceed to go about our day. • 6 November 2013