The Bryant Free Library sits on a now-busy state road in Cummington, Massachusetts, tucked into the trees at the bottom of a hill. Climb the hill and you’ll reach the sprawling boyhood home of the man for whom it’s named, the 19th-century poet and journalist William Cullen Bryant. He was born here in 1794, but he made his career in New York as the crusading editor of the Evening Post, and as a founder of the party that once was Lincoln’s. Bryant, as in Bryant Park. Yet he never forgot these hills, and in 1872, just a few years before his death, the old man came back to Cummington, a hundred miles west of Boston, and gave the town a library.

The Bryant is a cube-shaped mass of brick and rusticated stone that looks defensible, more like a military blockhouse than a seat of learning. Only a sign announces the building’s purpose. This library was built for use, not show, and inside there’s no wasted space, just a single large room whose brightness belies the place’s leaden exterior. Shelves run from floor to ceiling around three walls, with the library’s original collection on the top — history and travel, most of it, leather-bound and with an awful lot about Napoleon. There’s a table for new books and magazines, and a small desk for the librarian, while an alcove hides a twisting staircase that takes you up to a narrow gallery. It, too, runs around three sides, leaving the center of the room open to the light from the upper windows. The childrens’ books are up there, on low and reachable shelves, and the gallery itself would be a good place to hide and listen to what the parents are saying downstairs.

It’s called a “free” library because that’s what it is: no charge for using it, as opposed to the subscription libraries that were common at the time of its founding, clubby places in which you had to buy the right to borrow. The movement for free libraries was part of the democratization of American life in the years after the Civil War, and foundations like the Bryant can be found in many small New England towns. Some of them were put up with Carnegie money in the early years of the 20th century, which provided the construction costs for any town that would pay the librarian’s salary. Others had a local donor, like the Bryant or the one in the nearby town of Conway: a domed neoclassical structure built, in memory of his parents, by the first Marshall Field. That, indeed, was a common pattern. Some small fragment of a fortune made elsewhere would come home in the form of books and a building — Bryant’s gift even included a house for the librarian. You could put your name on such a place, as you couldn’t on a town hall or a church, and in any case a church could not, by the end of the 19th century, have been a gift to the community as a whole. A library was, and though the Bryant is simple, many of them are indeed as grand as churches, secular temples of knowledge that often stand as the most imposing piece of architecture in town. 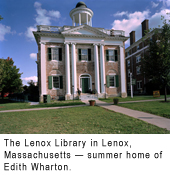 I’ve been collecting these places for years now, if that’s not too large a word to use for an occasional snapshot or scribbled page. I’ll brake for books on my drives through the countryside, and sometimes I’ll even a plan a day around a visit to two or three, mapping out a route that will take me over the smallest possible roads, through forests and blueberry barrens. Once I spent hours on the way to the impeccable Queen Anne-style library of Norfolk, Connecticut. Another time, I pointed myself due west from my home in the middle of Massachusetts to reach the Federal-period courthouse, a few miles away from Tanglewood, whose elegant rooms now house the books of Lenox. Those are the gems — rich towns with large budgets, libraries that can afford not only new thrillers but also a complete run of the Library of America. Most places can’t do that, not the small hill towns like Conway anyway, where the library may be out of scale with the village as a whole, or speak to a more densely populated past, before the farms and the mills went elsewhere.

Lately I’ve been searching for a library that doesn’t exist. Edith Wharton set her 1917 novel, Summer, in a Massachusetts town she called North Dormer, “high and in the open, and…[without] the lavish shade of the more protected New England villages.” It’s an empty place, without a “business block” or indeed any shops, “left apart by railway, trolley, telegraph, and all the forces that link life to life in modern communities.” But it does have a library, even if “no new books had been bought for twenty years,” and Wharton’s heroine is its librarian. Not that Charity Royall really cares about her work. The adopted daughter of the town’s lawyer, she’s taken the job only in the hopes of earning enough money to go away. Most weeks she can’t be troubled to keep the place open throughout its regular hours — all four of them. In fact “she hate[s] to be bothered about books,” and though she can put her hand on Uncle Tom’s Cabin in the dark, any more complicated request is apt to give her a grudge against the volume in question.

Or maybe to fluster her, especially when that request comes from a handsome stranger, a visiting architect who wonders if she’s got “any kind of a history of the place.” Wharton wrote the novel as a counterpart to the wintry Ethan Frome, but though it is in many ways a subtler work it’s never had the same profile as a high school classic. It’s probably got too much sex — Charity’s seduction, to start with, and then an abortionist, and finally a conclusion that brings us close to incest. Wharton wanted in these books to offer a portrait of New England’s “derelict mountain villages…grim places…[in which] slow mental and moral starvation were hidden away behind the paintless wooden house fronts.” She had come to know such towns in the early years of the 20th century, when she spent most of her time in Lenox, though neither North Dormer nor Ethan Frome’s Starkfield are at all a version of that gracious resort. 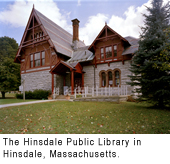 Instead Wharton wrote the Lenox summer cottages out of her scene, and got her settings from her drives through the surrounding hills, where she saw “villages bedrowsed in a decaying rural existence.” In such places everything was already old, the “sad, slow-speaking people,” in particular; the young, like Marshall Field, having abandoned these granite pastures to take their chances elsewhere. And Wharton’s description holds good even now. For the towns I pass through in quest of Charity’s library — Hinsdale and Ashfield, Plainfield, or the curiously named Peru — are not only still agricultural, but also places in which dereliction continues to keep pace with prosperity, and rusted farm equipment can be found in the woods that shroud what was once a field.

Wharton’s fictional library, like Cummington’s, is named after a local writer, a figure she calls Honorius Hatchard — a friend of Washington Irving and “the sole link between North Dormer and literature.” But she describes the building as a “queer little brick temple with white wooden columns” — something far more pompous than the Bryant — and so as I follow her path I continue to play the mug’s game of looking for an original. Housatonic? The location fits, next to what in her memoirs Wharton calls “Bear Mountain,” a place populated in fiction and history alike by a “colony of drunken mountain outlaws.” Certainly the library there is imposing enough, and gloomy. But Housatonic has a working industrial river; it isn’t at all like North Dormer. Hinsdale? It is indeed one of those “lost clusters of houses in the folds of the desolate ridges,” but its library is a cheerful piece of Victorian Gothic. The truth, of course, is that all landscapes of the mind are composite ones, a bit of this place stuck to that. And it’s easy to imagine a Charity Royall clever, shallow, and caught — in almost any of these towns.

When I visit a library, I spend part of my time examining the building itself. So I see that in Conway its façade doubles as a Civil War monument, with the names of the town’s dead cut into the wall — Ebenezer Blood, Alonzo O. Sikes. I look at the posters on the bulletin boards — a poetry reading, or instructions on coexisting with the local black bears — and I listen to the buzz of local gossip. Not everybody comes to the library for books, and most of these places seem to fill so many social functions that Mark DeMaranville, the Cummington librarian, says he sometimes feels “like the town bartender here.” But I spend most of my time trawling through the stacks. An early edition of William Dean Howells’ Venetian Hours, two volumes, checked out twice in the last century. Kazuo Ishiguro. Louisa May Alcott, a couple of copies of the new Harry Potter — the children’s sections are usually the most up-to-date. Britannica. At times there are local specialties. Cummington has a selection of literary quarterlies that DeMaranville tells me were donated by the poet Richard Wilbur, who lives just up from the Bryant Homestead. 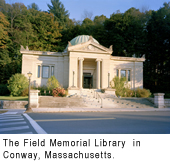 History tends to be weak, once you get beyond presidential biographies, but there’s almost always a crumbling set of Dickens, there’s Hardy and Hawthorne, and enough Faulkner to get started. Wharton, too — though while Cummington does have Ethan Frome and The Age of Innocence, it’s missing a copy of Summer. And almost everywhere I have found a copy of George Eliot’s 1859 Adam Bede, the bestseller of its day, and a book that in all likelihood would have been on the shelves in North Dormer. Charity doesn’t read much, though, and wouldn’t see that a part of her own story is already present as a warning in the pages of Eliot’s novel. She doesn’t know that the books in her care might have taught her something about the dangers of the world she finds so limited.

But that is what libraries are meant to do. I spent my early childhood in one that wasn’t much bigger than the single room at Cummington — a place of retreat that nevertheless served to launch me out into the world. It was small, and it was enough, a pocket-sized marvel that served to awaken a sense of the wonder to be found in books. And every one of the libraries I’ve collected has had that essential quality, that sense of peace and purpose. Their budgets are never enough and their collections can often seem inadequate, computer access may be minimal, and in the smaller towns they might be open only a few half-days each week. But I have not yet visited one, not even in the drowsiest rural village, in which a child could not find enough to get started, and someone to help him do it. Such open and generous places are inseparable from and necessary to our civic life, are indeed as one with the development of our democracy itself. William Cullen Bryant gave his town a library, and such gifts, multiplied across this land, have made his successors possible. • 23 October 2007